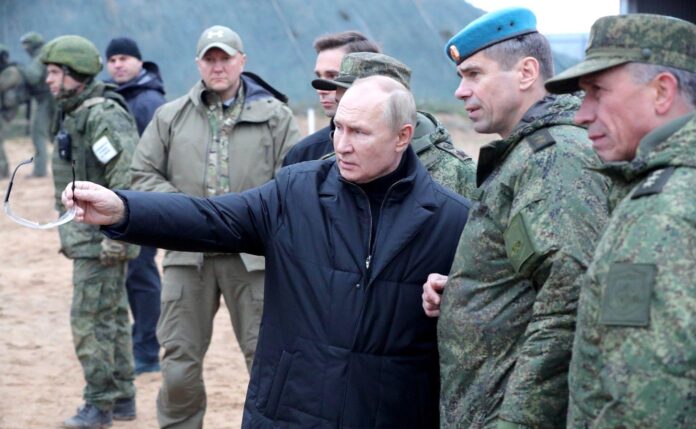 When Russian president Vladimir Putin declared martial law in the annexed Ukrainian territories on 19 October, he also explicitly “legalised” the looting of the country’s cultural heritage in the name of “preservation”.

According to the Ukrainian press, the Russians are currently removing artefacts from the museums in Kherson, the city in southern Ukraine conquered on 2 March, but secret removal of the most valuable museum objects had already started in May when the Russian army faced a possible Ukrainian counterattack.

Looting has not been limited to the Shovkunenko Regional Art Museum, with its collection of Ukrainian and Russian fine and decorative arts, and the Kherson Regional Museum, which tells the story of the region from ancient times through its material culture. The occupiers have also dismantled and removed Soviet-era monuments to the Russian imperial heroes General Aleksandr Suvorov and Admiral Fyodor Ushakov, while the fate of the monument to Prince Grigory Potemkin, lover of Empress Catherine the Great, has been more complicated. Erected in 1823, it was exiled in 1917 to the courtyard of the Regional History Museum and then disappeared entirely during the Second World War. The monument that has now been dismantled by the Russians is a replica produced in 2003. Not just the statue has been removed: the prince’s mummified remains in the Cathedral of St Catherine have been exhumed and taken to an unknown location.

Ukraine’s recently occupied territories will likely not be the only targets of Russian “evacuation”. Another decree signed by Putin on the same day as the declaration of martial law announced the introduction of “special measures” in the Russian regions of Krasnodar, Belgorod, Bryansk, Voronezh, Kursk and Rostov on the border of Ukraine, and in Crimea, annexed in 2014.

The Russian plan to “evacuate” the Crimean museums became known before the publication of Putin’s decrees of 19 October. On 15 October, the Ukrainian ministry of Culture declared that removing the most valuable objects from the museums of Crimea and other occupied territories was in blatant violation of the Hague Convention for the Protection of Cultural Property in the Event of Armed Conflict. The ministry urgently contacted Unesco, asking it to prevent another violation of international law by the aggressor, but it is unlikely that the Russian forces will comply with any international calls to desist. In Putin’s view, both Crimea and the Ukrainian regions annexed on 30 September are Russian territories regulated by local legislation, not international treaties.

Two exhibitions from Crimea have become symbols of the 2014 annexation of the peninsula. One has never returned to Crimea; the other never left it.

The show Crimea: Gold and Secrets of the Black Sea, which opened at the Allard Pierson Museum in Amsterdam shortly before the annexation in March 2014, ended with a judgment in the Netherlandish courts that the items from Crimean museums should be returned to the Ukrainian state despite the Russians laying claim to them.

If that case attracted international attention, the fate of the exhibition that never left the peninsula remains obscure. In 2008, the curators of the Suermondt-Ludwig Museum in Aachen, Germany, located 74 paintings in the Simferopol Art Museum in Crimea that had been taken from Aachen by the Red Army after the Second World War.

Peter van der Brink, the director of the German museum, spent five years negotiating for these paintings with Ukrainian officials. He offered to donate five of them to the Simferopol Museum, asked for five canvases of local importance to Aachen to be returned to the Suermondt-Ludwig Museum, and agreed to give the remaining works of art on loan for 50 years. In late spring 2014, 20 of the paintings from the Simferopol Art Museum were due to be exhibited in the Suermondt-Ludwig Museum and then toured around Germany, but the planned exhibition never took place. After the annexation of Crimea later that year, the paintings came under the control of the Russian Federation. Their fate remains to be seen.

Ukrainian military intelligence has reported that the Russian evacuation plan includes both the removal of museum objects to storage within Crimea and the “evacuation” of the most valuable works to the territory of the Russian Federation. According to the Ukrainian ministry of culture, Russians plan to take away all archaeological objects made of precious metal, in which the collections of the peninsula are rich. Among the most important are the State Museum-Preserve of Tauric Chersonesos, site of the Hellenistic city near Sebastopol and the Kerch Archaeological and Historical Museum with its collection of ancient gold jewellery and coins.

It is unlikely that archaeological objects will be the only target of the Russian forces’ planned evacuation. Crimea has important art museums, such as the Kroshytsky Art Museum in Sebastopol with its collection of Russian painting and works by Dutch, Flemish and Italian Old Masters, while the Aivazovsky Picture Gallery in Feodosia is internationally known for the oeuvre of the eponymous 19th-century marine painter.

What will happen to such Ukrainian treasures after evacuation to Russia remains unclear. The parallel with Nazi Germany’s removal of museum collections for “protection” purposes is startling, with the peculiar “legalistic” decorum of the evacuation so similar to the approach of Third Reich officials who hid their robbery under the fig leaf of urgently adopted “legal regulations”.