Home News Watch John Oliver Make the Case for a New Frontier in the... 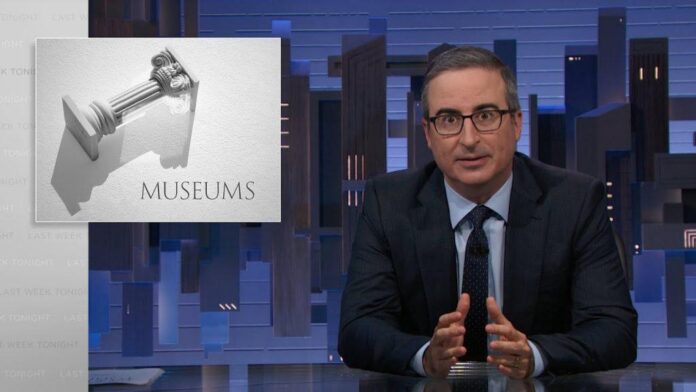 John Oliver wants to create an institution that would allow countries to steal back cultural objects from the Western nations that once looted them.

The “Last Week Tonight” host laid out his plan Sunday night, in the conclusion to an extended episode that took aim at museums and the corruption of the modern antiquities market. Oliver’s targets included Sotheby’s, the British Museum, and the Metropolitan Museum of Art—each of which was shown to own or sell pieces of cultural heritage unethically sourced from abroad.

The whole episode is available to watch for free on Youtube.

One segment featured a documentary clip of the Rubin Museum of Art executive director Jorrit Britschgi being asked if his institution had worked with Deepak Shakya, a dealer convicted of selling stolen artifacts. “I don’t think we should answer that question,” Britschgi replied sheepishly, almost as if taking a lie detector test.

From there, the host segued into a broader discussion of why Western cultural institutions urgently need to reckon with the colonial legacy of their own collections.

“The fact is,” Oliver said, “museums should be getting asked hard questions about every aspect of both their acquisition process and their collections as part of a long overdue conversation about where their items came from and whether anyone wants them back.”

“While obviously museums should not be violating the law, they shouldn’t be violating basic moral decency either,” he went on. “There is so much that we need to do to reckon with the harms both past and present of colonialism. But this should really be the easy part.”

The episode ended with Oliver’s pitch for the Payback Museum—and he brought in fellow comedian Kumail Nanjiani to do it.

In a special video segment, Nanjiani toured us around the hypothetical venue, which he referred to as the “first public museum in the world devoted to providing recourse to nations who have been plundered of their greatest treasures throughout history by colonial dickheads.”

Among the objects on view in the Payback Museum’s halls was a section of Stonehenge stolen by Nigeria as punishment for the 1897 looting of the Kingdom of Benin by British troops; and the Liberty Bell, purloined by Peru in response to the U.S.’s illegal exportation of ancient Indigenous textiles.

“This is a collection that’s all about disconnecting people,” Nanjiani explained. “Specifically disconnecting Western countries from their shit—you know, the way they did to everyone else.”

Art Industry News: Art Basel Staffs Up to Build a Year-Round Marketplace Outside of Fairs + Other Stories