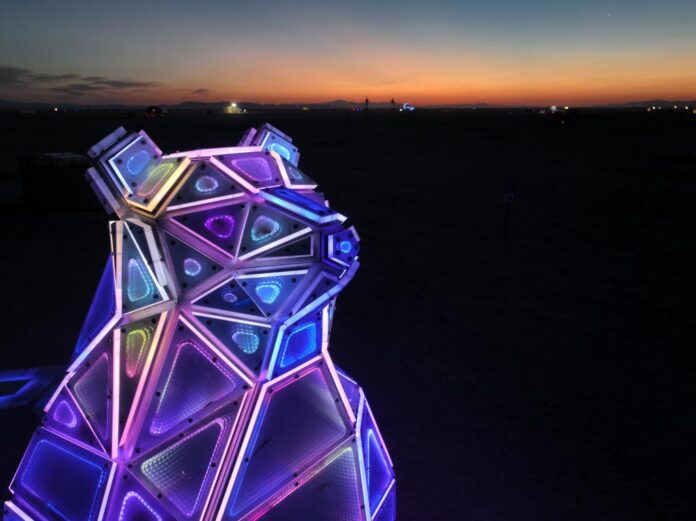 For the first time in three years, Burning Man is back, drawing an expected 80,000 attendees to Nevada’s remote Black Rock Desert for a weeklong spectacle of art, music, and—yes—fire.

In exchange for braving swirling alkaline dust and temperatures expected to soar up to 105 degrees this weekend, guests will be treated to a record 88 official Burning Work artworks. With 52 of the projects held over from 2020 finally being realized, the gathering opted to provide funding to 15 more creators than in a normal year.

Photos of the art can be slow to come in from the remote affair due to poor internet connectivity, but we managed to pull together some of the stunning sculptures and installations currently on view in the barren desert landscape.

The Burning Man temple has been a staple of the gathering since 2000, serving as a memorial to the dead and set aflame at the end of the event. This year’s temple was designed in the shape of a compass rose beacon, and was constructed offsite at the Paradise Ridge Winery outdoor sculpture garden in Santa Rosa, California, before being transported to the desert. The word empyrean means “relating to heaven or the sky,” and the temple, which is illuminated in colored lights at nightfall, features tessellation pattern latticework and a hanging lantern flame at its peak.

by Dave Keane and the Folly Builders

This is Dave Keane’s followup to , his 2019 installation of a derelict village where both the fishing and mining industries had dried up. is envisioned as a forest of 27 trees grown from the ashes of , and actually incorporates burnt lumber from the Lighting Complex fire in Santa Cruz. After years of working on Burning Man temples where $200,000 worth of virgin lumber would be set on fire after only a week, Keane uses mainly reclaimed and salvaged materials on his sustainably minded builds—and he’s opting not to burn this year’s piece in the hopes of exhibiting the geometric grove in the future.

by Harlan Emil and Maraya

Appealing to Burners’ hippie-esque sensibilities is this 12-step pyramid mimicking the proportions of Chichen Itza, topped by crossed arches that promise to transport viewers to “higher dimensional crystalline timelines.” The piece, which includes glowing LED lights and both live and recorded musical components, is envisioned as a sacred geometrical portal. The creators plan to bring it to Art Basel Miami Beach and Area 15 in Las Vegas.

Yelena Filipchuk, who with Serge Beaulieu makes up one half of the Hybycozo artist collective, pays homage to her native Ukraine in the duo’s 2022 Burning Man installation, which incorporates traditional embroidery patterns. The smaller of the installation’s three sculptures spin, and the work is illuminated at night, casting dramatic kinetic shadows across the desert playa. The artists hope to sell the works and donate some of the proceeds to charitable organizations such as United Help Ukraine.

by Marco Cochrane and Julia Whitelaw

This giant depiction of the goddess Gaia by husband-and-wife team Marco Cochrane and Julia Whitelaw is made from stainless-steel rods covered with a stainless-steel mesh and LED lights. It’s “inspired by and in honor of nurturing energy…mother energy…love and connection: and the joy we feel when we act on the imperative to take care of each other and our planet,” the artists write on their website.

and by Jen Lewin Studio

Inspired by photographs from John Weller’s 2013 book , Jen Lewin’s interactive sculpture is made from recycled ocean plastic collected, cleaned, and processed by Ocean Plastic Technologies in Durban, South Africa. (U.S. plastic manufacturers told Lewin that her vision could never be realized.) , a large polar bear sculpture, overlooks the large, fractured ice field, which is embedded with LED technology to make it glow at night.

by Anne Staveley and Jill Sutherland

A post shared by CIRCLE OF DOORS TAROT (@circleofdoorstarot)

This installation of 22 doors arranged in a circle, meant to represent a tarot deck come to life, was first staged at Burning Man in 2014. The sculpture accompanies a 78-card tarot deck featuring portraits of women embodying various female archetypes: witches, maidens, mothers, and crones. Photographers Anne Staveley and Jill Sutherland have transformed the series into an interactive experience that its creators hope will tap into the divine.

Museums Can, and Do, Talk About Race. Just Not Whiteness.