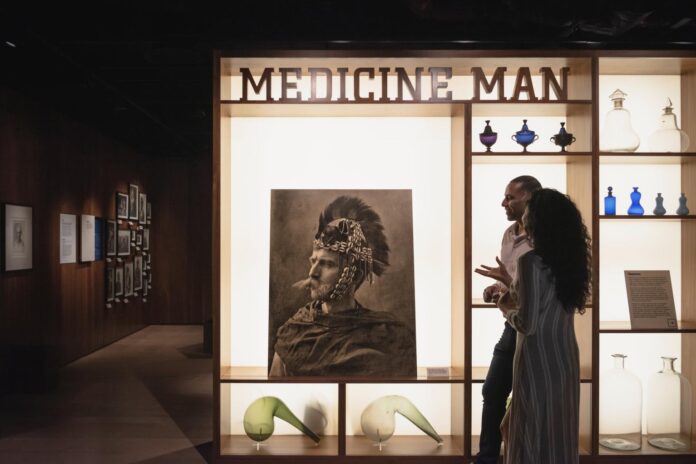 The Wellcome Collection, the London museum run by the Wellcome Trust, is to permanently close a curated display of medical artefacts amassed by its founder on the basis that it “perpetuates a version of medical history that is based on racist, sexist and ableist theories.”

The announcement, made on 26 November, pertains to a permanent display in the Wellcome Collection, a museum on the Euston Road, London, which opened in 2007. The display had been on show for the last 15 years, and was titled Medicine Man, a reference to its founder, Henry Wellcome, who died in 1936.

The exhibition was closed, permanently, on 27 November. The future usage of the artefacts remains unknown at this stage.

The decision has been met with dismay by some members of the museum community and the wider public who have likened it to cultural vandalism.

Medicine Man showed a selection of curated artefacts from the collection of Henry Wellcome, the founder of the trust and an American pharmaceutical entrepreneur whose company, Burroughs Wellcome & Company, eventually merged with other pharmaceutical organisations to form the modern-day drugs behemoth GlaxoSmithKline.

Wellcome amassed more than one million items relating to the history of medicine throughout the course of his life. The Wellcome Collection was founded as a place to display his collection, which he left to the trust in his will, to a visiting public for free. He also founded the Wellcome Trust, a registered UK charity that focuses on biomedical research. The charity is the largest in the UK, with assets of £36bn. The trust is credited with key findings in the development of drugs that combat the spread of certain cancers, as well as HIV.

Henry Wellcome’s collection was vast and varied. The Medicine Man display included the possessions of famous historical figures: visitors could view a toothbrush used by the French military commander Napoleon Bonaparte, shoes owned by the social reformer Florence Nightingale, the death mask worn by the British prime minister Benjamin Disraeli and the skull-handled walking stick of the Victorian naturalist Charles Darwin, founder of the theory of evolution, who saw the stick as a ‘memento mori’—a reminder of human mortality.

On show was also ephemera used by less ennobled people, like the good-luck charms and amulets carried by British, Russian and Japanese soldiers during the Second World War. Or an illustration, originally created for British news magazine Sphere, showing British soldiers being treated at a field hospital in Verdun, France, during the First World War.

But some of the artefacts in Henry Wellcome’s collection, as well as the way they were was displayed in the museum was, from the off, “problematic,” museum staff have said.

“The story we told was that of a man with enormous wealth, power and privilege,” the museum said in the course of a Twitter thread published last week. The thread opened with the question: “What’s the point of museums? Truthfully, we’re asking ourselves the same question.”

In a series of tweets and pictures, the museum made direct reference to a series of artefacts that it felt were racist. These includes a 1916 painting by Harold Copping titled A Medical Missionary Attending to a Sick African, which depicts an African person kneeling in front of a white missionary.

“The result was a collection that told a global story of health and medicine in which disabled people, Black people, Indigenous peoples and people of colour were exoticised, marginalised and exploited—or even missed out altogether,” the thread read.

The closure of the display “marks a significant turning point, as we prepare to transform how our collections are presented,” the Wellcome Collection said in a statement on their website. The collection is now embarking on “a major project that will amplify the voices of those who have been previously erased or marginalised from museums, bringing their stories of health and humanity to the heart of our galleries,” it said.

The museum appointed Melanie Keen as a new director in 2019. On her appointment, Keen said she would interrogate some of the objects in the museum, asking who they belonged to and exploring how they were acquired.

Keen said at the time: “It feels like an impossible place to be worrying about this material we hold without interrogating what it is, what narratives there are to be understood in a more profound way, and how the material came to be in our collection.”

Dan Hicks, a professor of Contemporary Archaeology at the University of Oxford and a curator at the university’s Pitt Rivers museum, was initially employed by the Collection to stage what they termed ‘interventions’ around the artefacts. Hicks and other artists wrote texts that sought to situate the artefacts in a more contemporary guise.

Alongside one artefact, a fragment of the English philosopher Jeremy Bentham’s skin, Hicks wrote a caption that ended with the statement: “Time’s up. Just rewriting labels isn’t enough. Let’s face up to all the human remains that Henry Wellcome collected. Dismantle Wellcome’s enduring colonialism, its white infrastructure.”

In a tweet Hicks said: “Colleagues at Wellcome are offering some of the vision and leadership we need in the UK arts and culture sectors. The idea that a museum must never change with the times is perhaps the most ludicrous and yet pernicious argument we’re seeing in the right’s ongoing War on Culture.”

It has been a turbulent period of self-reflection for the Trust. This August, it reported on a pledge it made to tackle racism in June 2020, shortly after the death of George Floyd in the US. In the August report, the trust’s director, Jeremy Farrar, announced the organisation had “fallen short of the commitments we made”.

An evaluation Farrar commissioned said the trust is “still institutionally racist”, finding that harassment, discrimination and micro-aggressions against Black staff members remained a part of the organisation’s culture. Farrar apologised for “unacceptable racist behaviours” and has committed to “a set of positive action principles applied to funding decision-making processes”.

The response from some quarters of the museum world has been furious, including accusations that staff at the Welcome Collection have failed on the terms set out in its own constitution.

Barbara Rich, a London-based barrister for the firm 5 Stone Buildings, has pointed to the Wellcome Trust’s constitution, which is available on its website. In clause 2(d) of Schedule A of the trust deed, the trustee’s pledge to make the objects of the Trust available “for the use of the public benefit, as the Trustees shall think fit, of any part of the Wellcome Collections.”