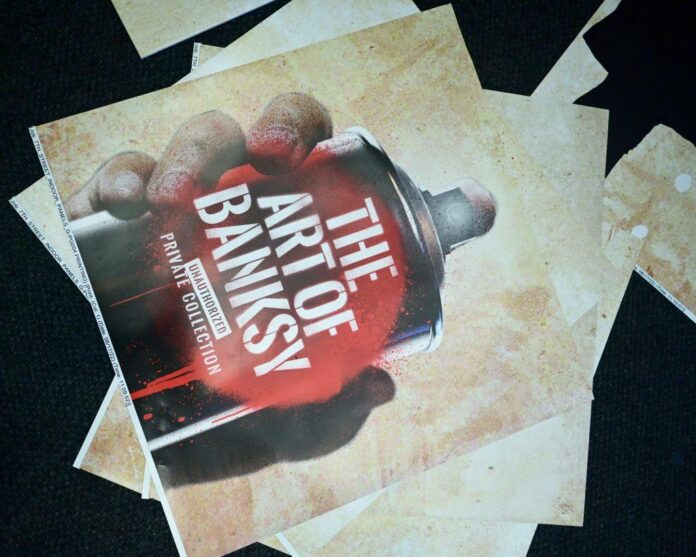 An anonymous woman who says she is Banksy’s ex-girlfriend has loaned six never-before-seen early works purportedly by the street artist to the latest installment of a traveling exhibition titled “The Art of Banksy,” on view at MediaCity in Salford, England, from tomorrow through January 8.

According to Independent, the relics include “handmade birthday cards, flyers, and an A-board for her corset shop in Bristol, which she claims the anonymous graffiti artist painted for her while they were together from 1994 to 1998.”

“The Art of Banksy” is one of numerous “unauthorized” shows of Banksy’s work that have taken place over the years, often capitalizing on the artist’s mysterious reputation. Some are are backed by entertainment corporations and charge admission.

“Banksy has NOTHING to do with any of the current or recent exhibitions and they are nothing like a genuine Banksy show,” read a statement on the website of Pest Control, the group authorized to authenticate Banksy works. These shows, they added, “might be crap so please don’t come to us for a refund.”

Michel Boersma, founder and CEO of GTP Entertainment, curated and produced the Salford stop of “The Art of Banksy” U.K. tour, which most recently appeared in London.

The show’s FAQ page says that Pest Control has verified all the artworks that appear in “The Art of Banksy,” adding that private collectors purchased them directly from the artist. In total, the nearly 13,000-square-foot event in Salford will include 145 prints and canvases from 2002 to 2017, featuring iconic images like Girl With Balloon (2002) and Brace Yourself (2010).

“I could not believe what I was reading when the email suddenly appeared in my inbox two weeks ago,” Boersma told the Independent of the six intimate additions to his exhibit at MediaCity. “If true, these were completely unknown and highly personal works by Banksy.”

“We then established the authenticity of the owner and the works she was offering,” Boersma continued. “Speaking with her, a lot of details of the early life of the now world-famous artist were shared,” he said, including “Exciting little anecdotes, about her and their life at the time.”

Exhibition organizers did not immediately respond to questions about how the verified the woman’s identity and the works’ authenticity.

Another show, titled “The Art of Banksy Without Limits,” came under fire last summer following runs in Seoul and Warsaw where attendees noticed that out of 150 works, only 27 were originals. Organizers issued refunds.

Pest control did not respond to a request for comment.