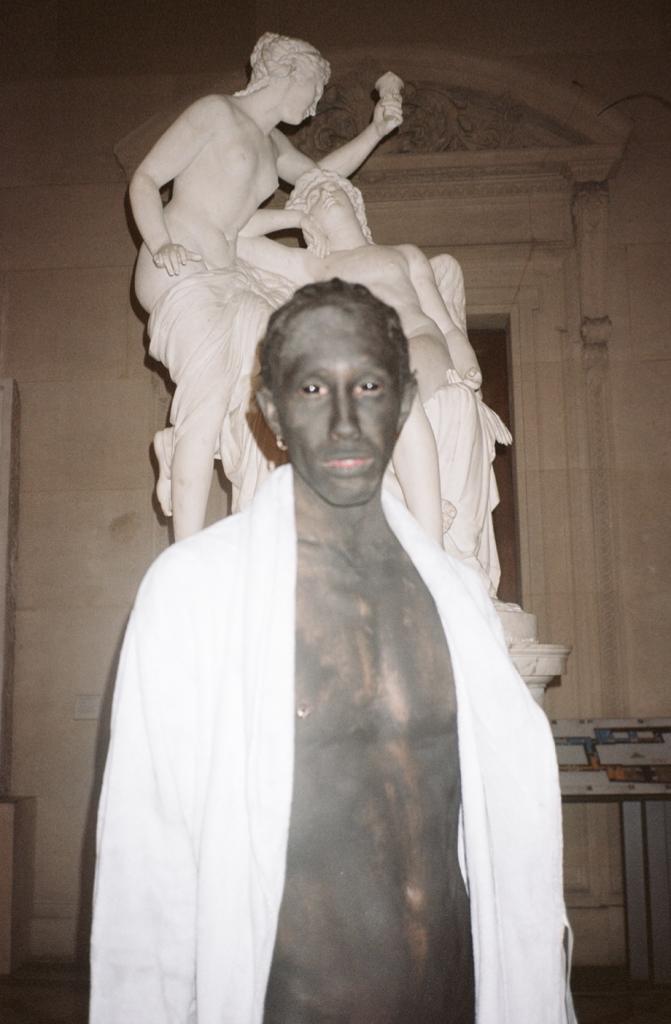 On the heels of his remarkable outing in the New Museum’s atrium, performance artist and sculptor Miles Greenberg is beginning to seize the art world by storm.

The 25-year-old artist, who has studied under such legends of performance art as Marina Abramović and Robert Wilson, was invited to the Louvre to perform and film his new work (2023), which sees the artist engage with a durational performance at night in the storied museum, painted and pierced with real arrows.

I am truly beside myself that I get to share a preview of the making of the film, which premieres at the Louvre on January 19, and online January 26, here in Wet Paint in the Wild for you fine folks. Take it away, Miles! 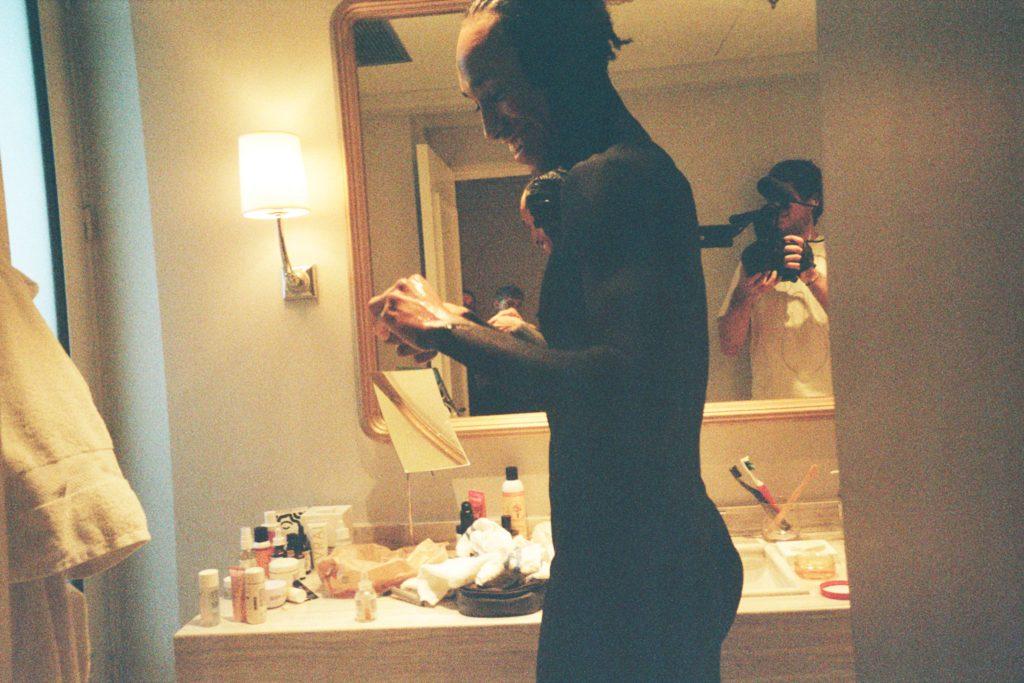 We set up shop in the Hotel Du Louvre. I was happy they’d given us the room that was behind the letter “L” in Louvre on the sign on the façade facing the Comédie Française. You could see the big letter from the bed and that felt like a good omen. I started getting into paint around 3 p.m., and I bought a €20 hoodie from the tourist shop across the street (“PARIS” embroidered on the chest) to avoid fucking up the hotel bathrobe too severely. 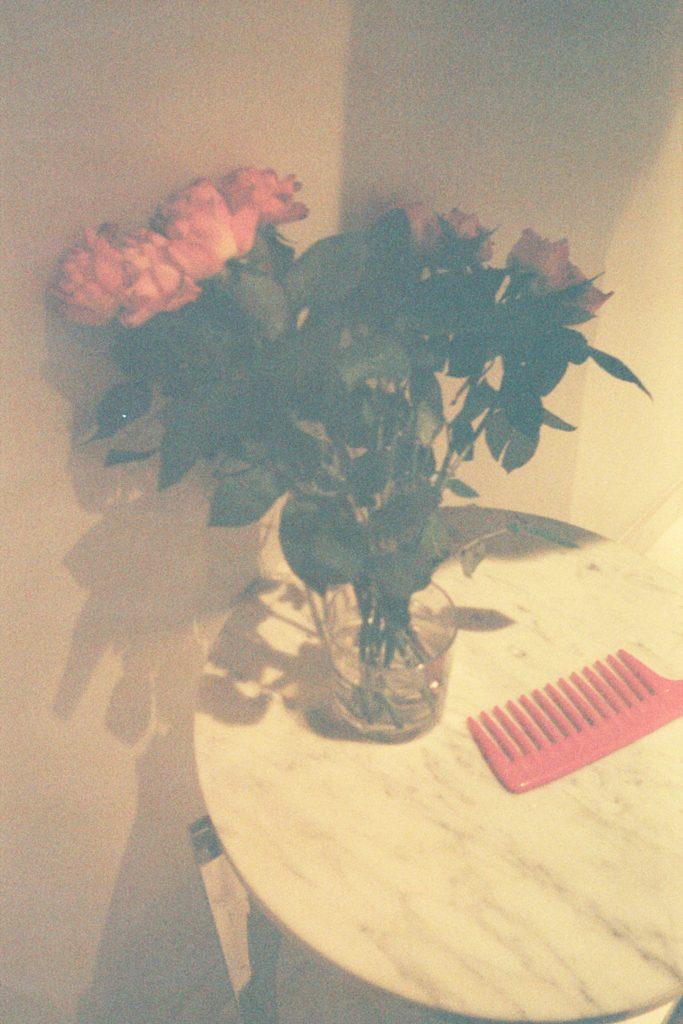 I also bought myself some roses. €4. 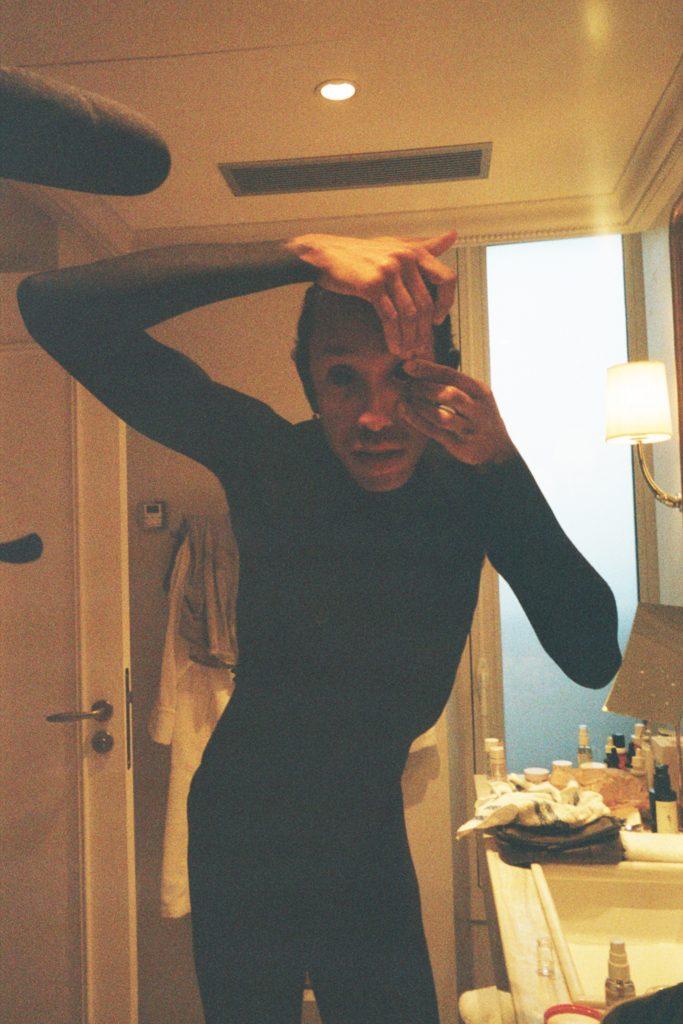 To put in sclera lenses, you have to imagine shoving a Canadian $2 coin into your eye socket like a vending machine. They’re about two and a half centimeters across and cover every visible bit of white. Your eye just vanishes. 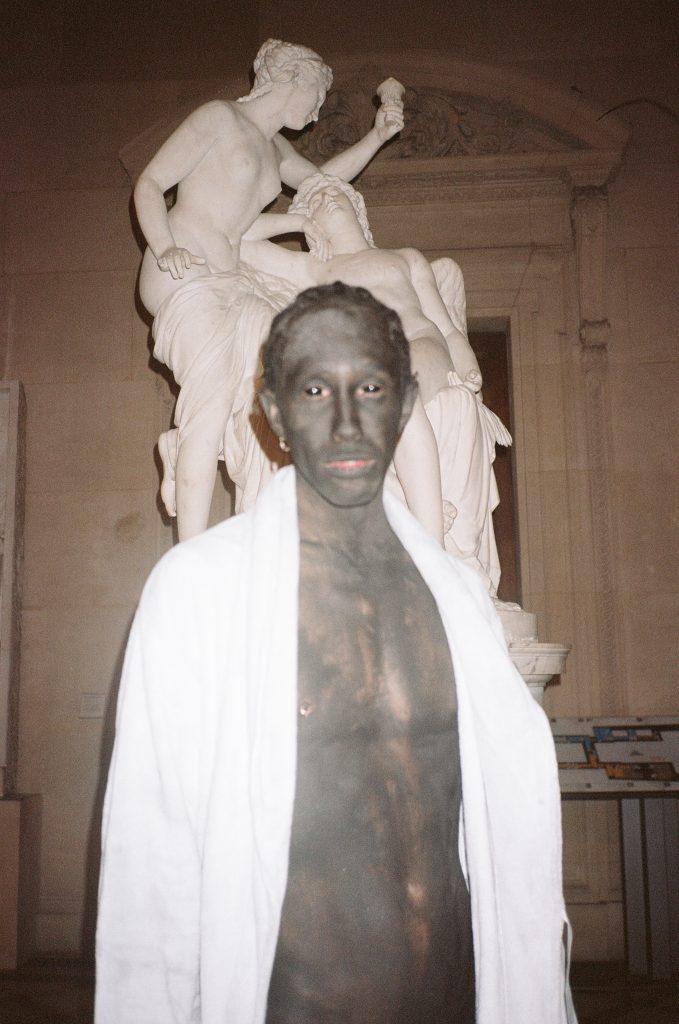 At around 5:06 p.m. we rushed out of the hotel; my boyfriend, Viðar Logi, my best friend in Paris and former roommate Rachel Halickman (she’s a vintage fashion archivist who moonlights as my stage manager for all my shows in France), two journalists, two makeup artists, a piercer, a filmmaker, and then me, wearing a bathrobe, slippers, a hoodie, and sunglasses. We brought our own food and water in two massive Monoprix bags. 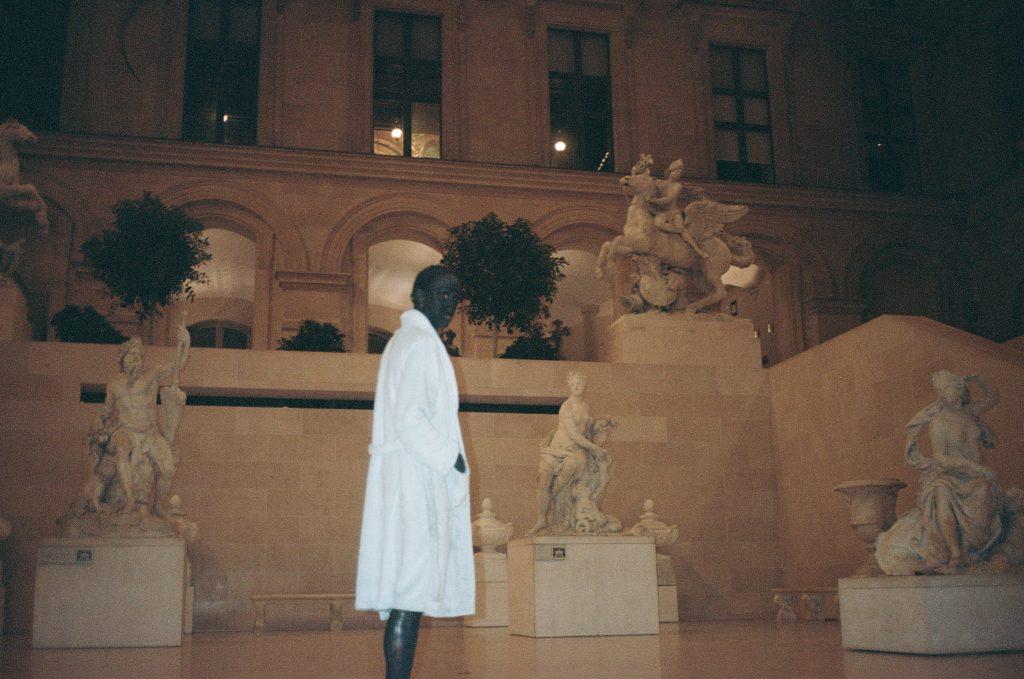 We arrived at a secret side entrance at exactly 5:10, where the camera crew and the curator’s assistant were waiting for us with our badges. We made our way down through winding corridors until we got to a wide passageway where the last tourists were slowly filing out. The museum was still open until 6 p.m. The camera crew went ahead to load in gear while I sat behind a large Egyptian column and waited until the coast was clear. When it was, I was escorted to Cours Marly. Now, the museum was closed, and we were locked inside. 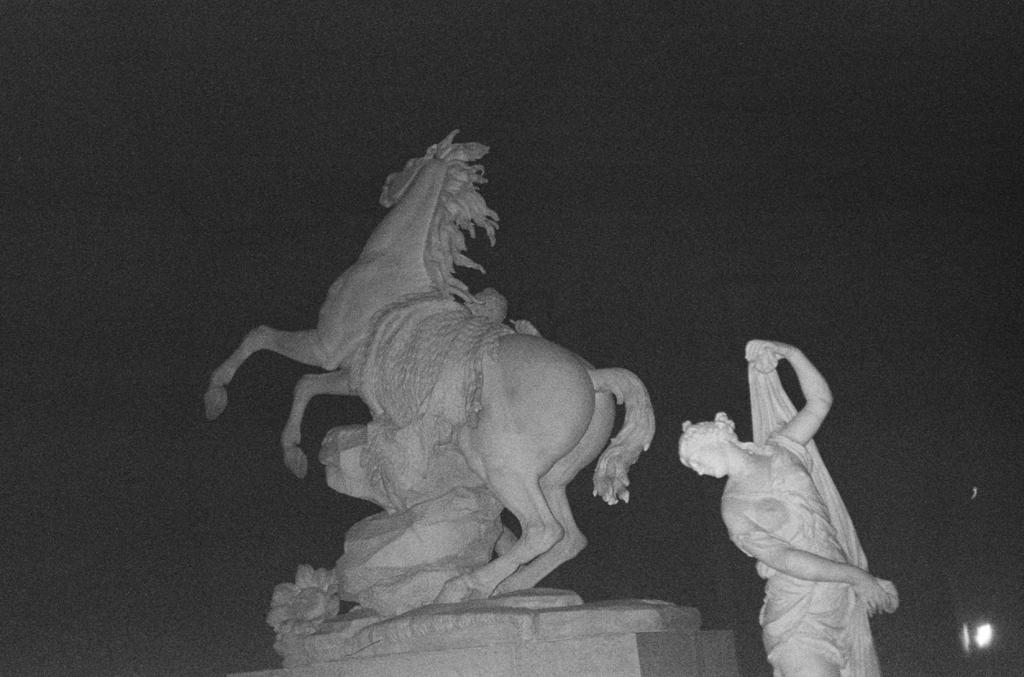 Cours Marly is my favorite room at the Louvre. It’s so grandiose in its proportions yet still feels incredibly quiet. Each piece in it is full of movement. All statues originally came from the garden of Louis XIV’s second home west of Versailles called Chateau de Marly. 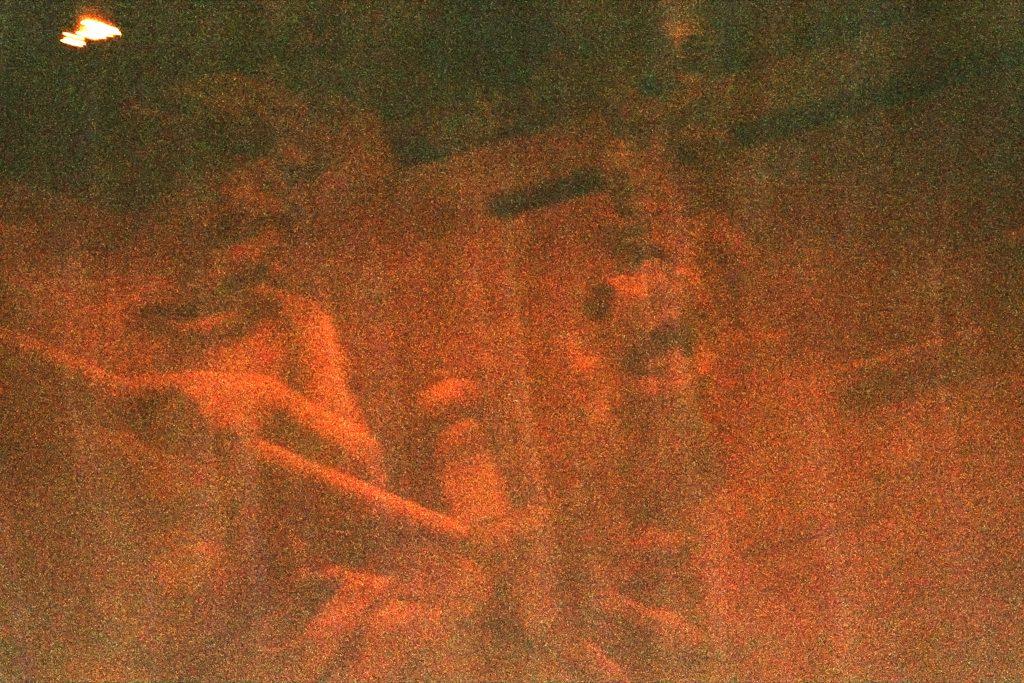 Two of the larger marbles are personifications of river spirits representing the Seine and the Marne rivers, respectively. A third one depicting Neptune sits between the two. 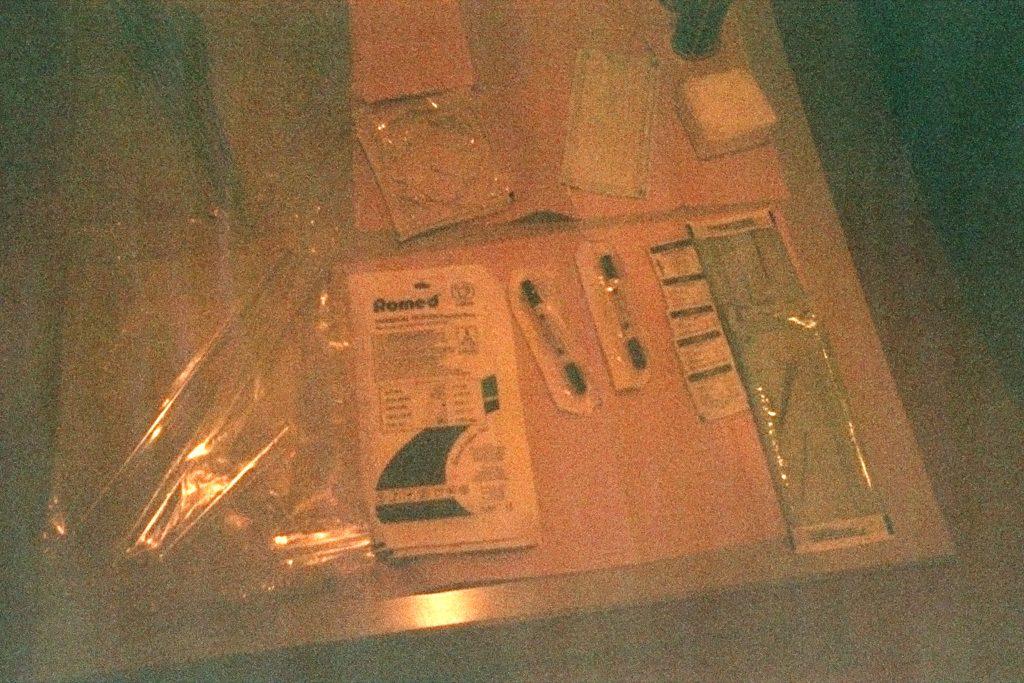 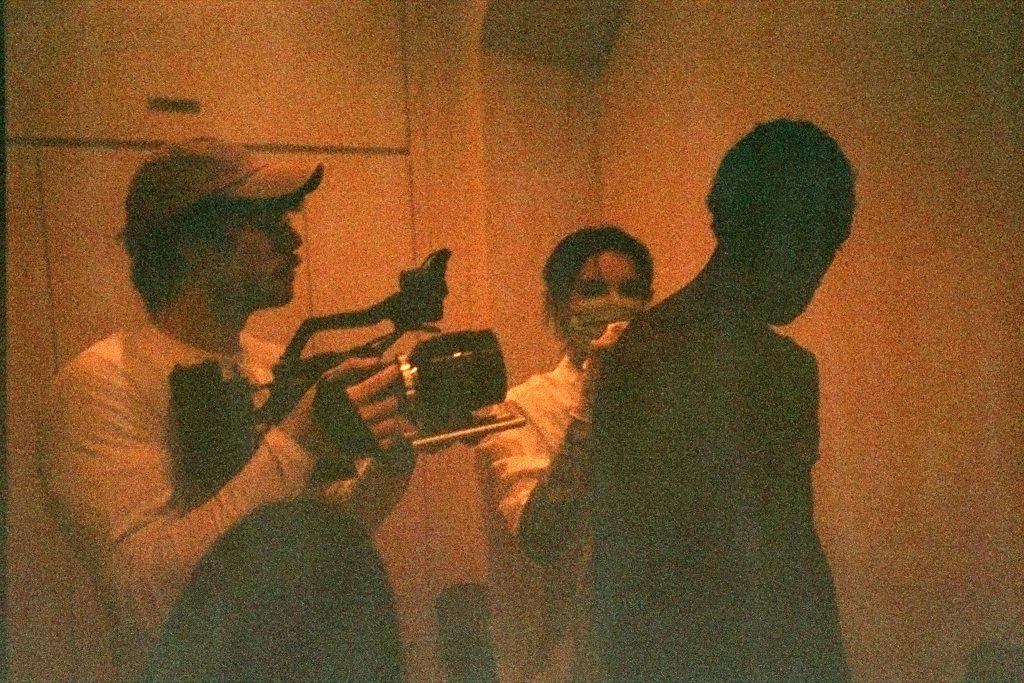 After some camera tests and light stretching, we started the hard part. Océane, our piercer, began prepping the area. 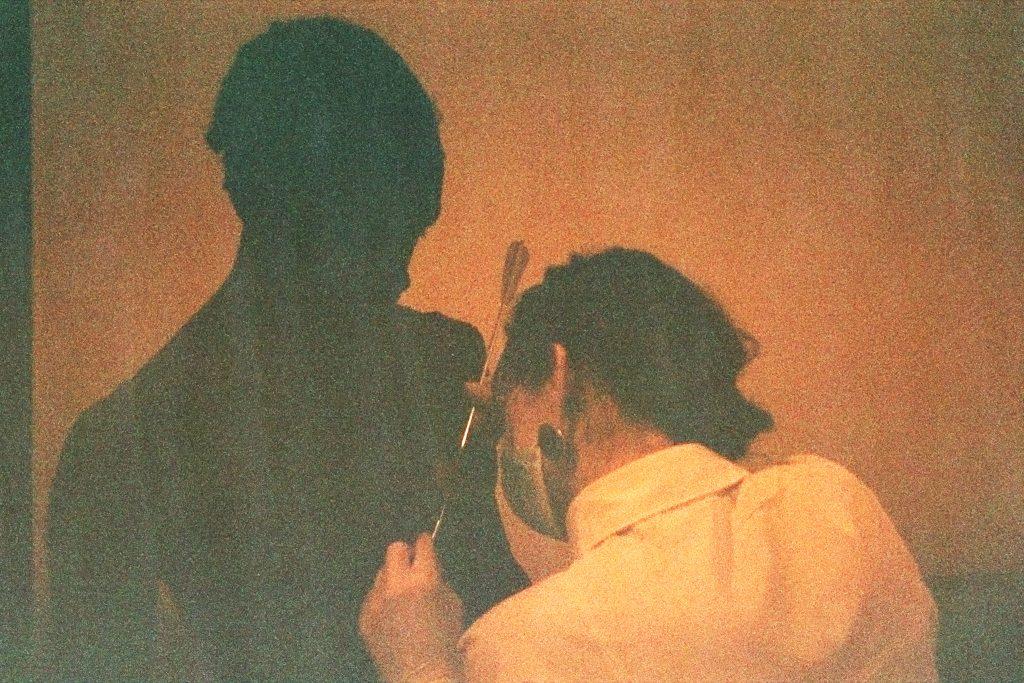 Getting stabbed is a very frightening kind of pain. I wouldn’t recommend it. Your body knows that when a large-ish sharp object punctures your skin, there’s a good chance it might kill you, so your whole body just floods with adrenaline. Both my sight and my hearing all but disappeared for about 20 solid seconds. I later learned that this sensory shutoff is a natural response your body produces when it thinks you might be about to die. It’s so that you can avoid feeling a painful death. I somehow find that kind of comforting. Our bodies take really good care of us. 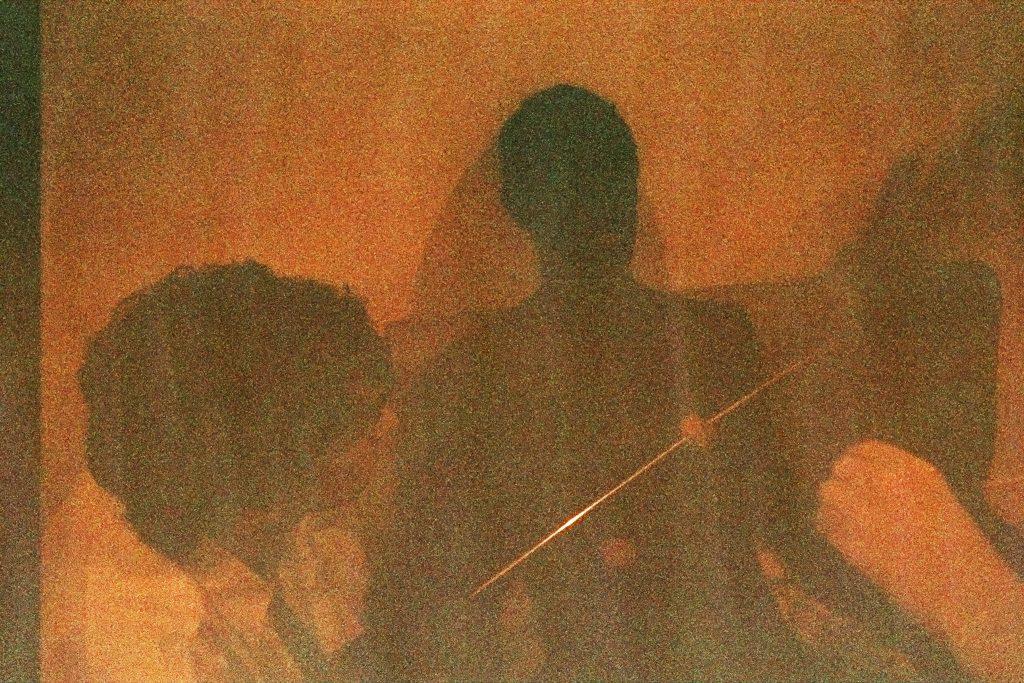 Anyway, I felt like I was dying for about a minute, slumped over in the sofa and dripping with cold sweat. After that minute passed though, a total transformation took place. My body became light and strong. It was just like the feeling of breaking a fever, times 1,000. I sat bolt upright with a flash of energy. It felt like my peripheral vision expanded by an extra 1,000; I could feel every inch of my body so acutely; I was so laser focused that I could count the hairs in someone’s eyebrow. 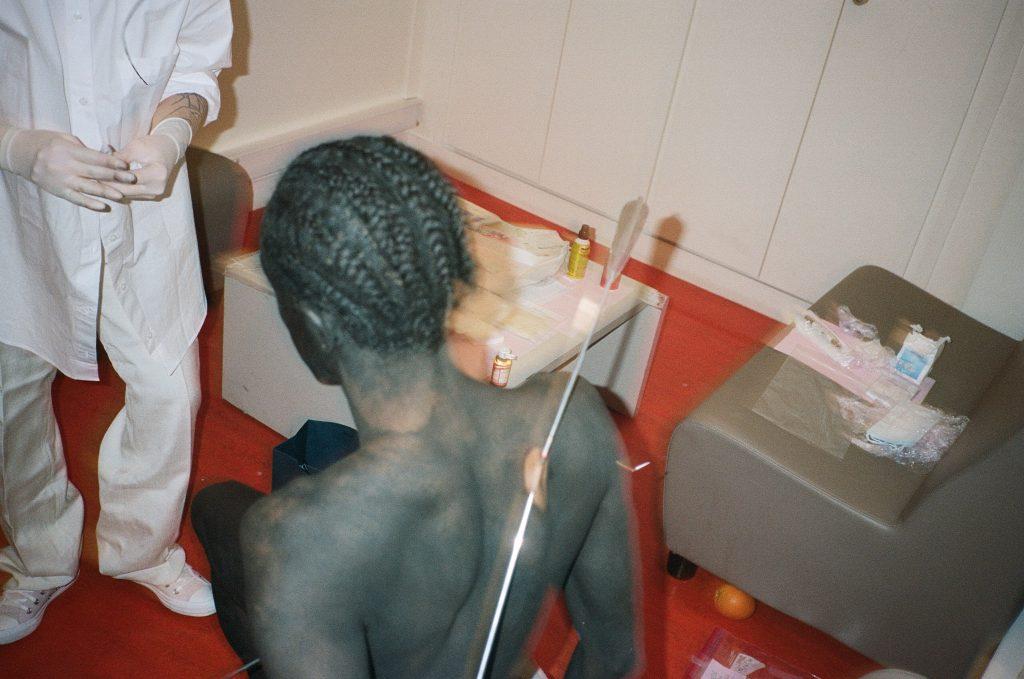 I barely felt the second one. 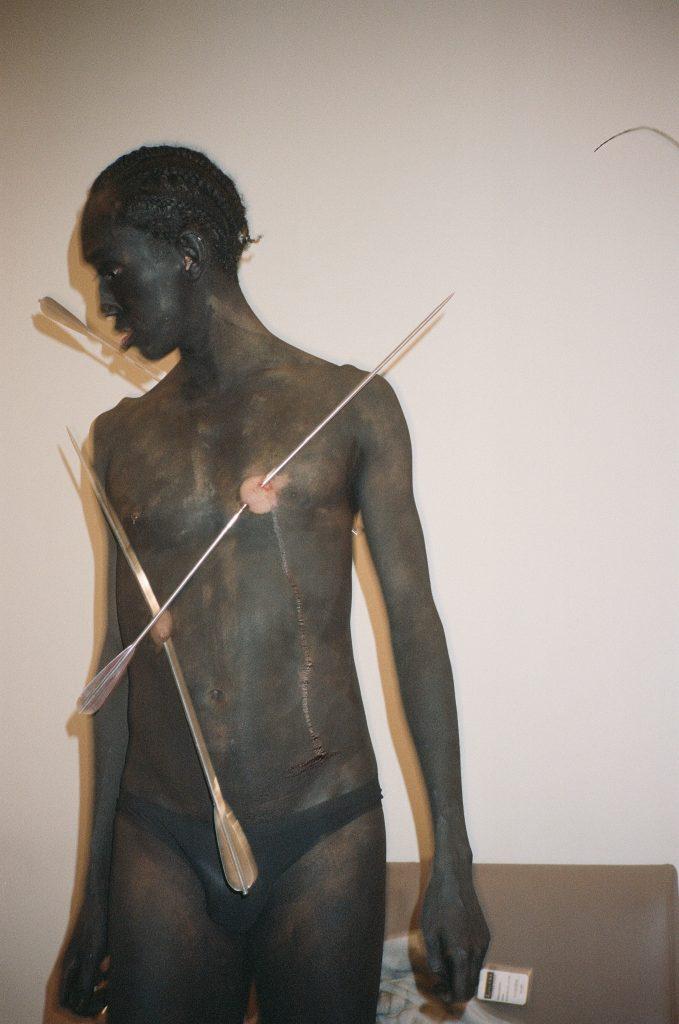 I thought that blood trickle looked so hot. 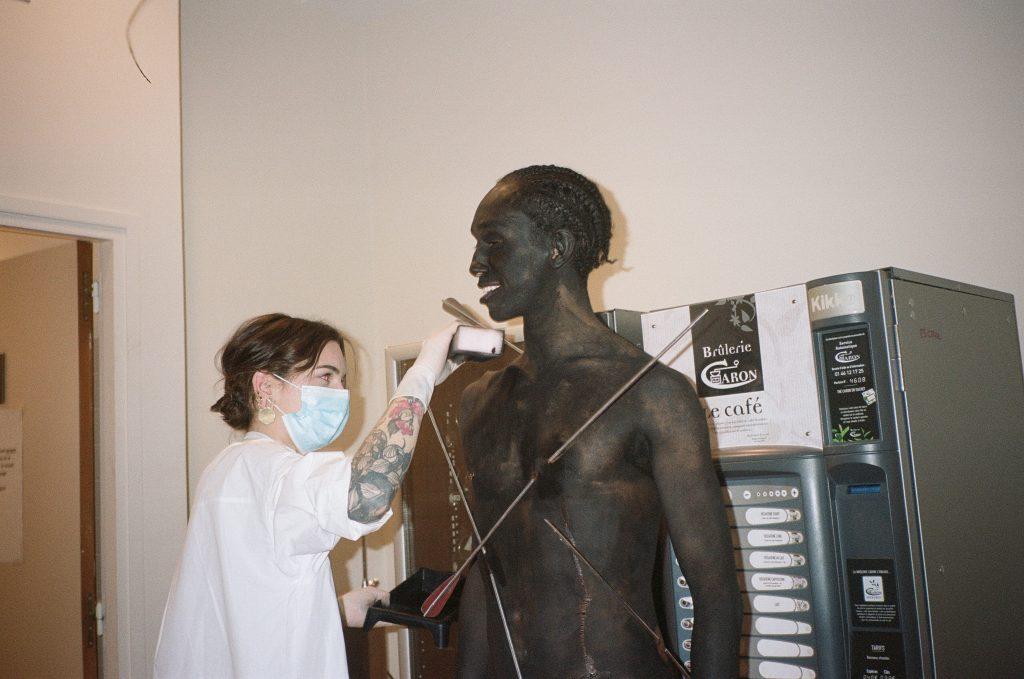 The blood is done coagulating, so we do some paint retouching. 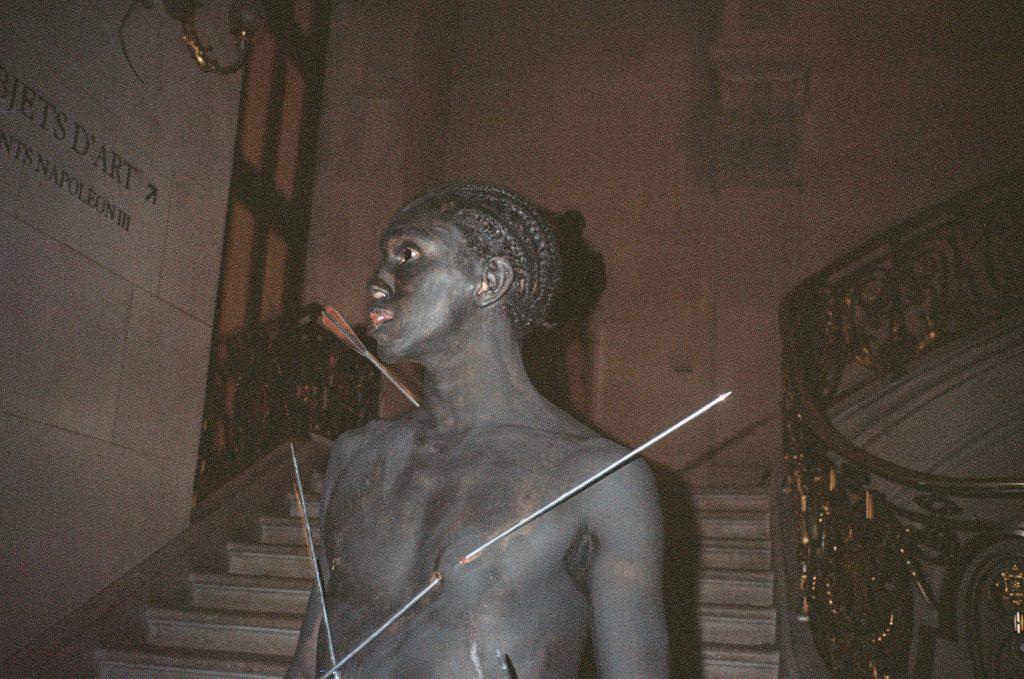 7:30, I head into the main space. The cameras are ready and I’ve peed at least thrice. 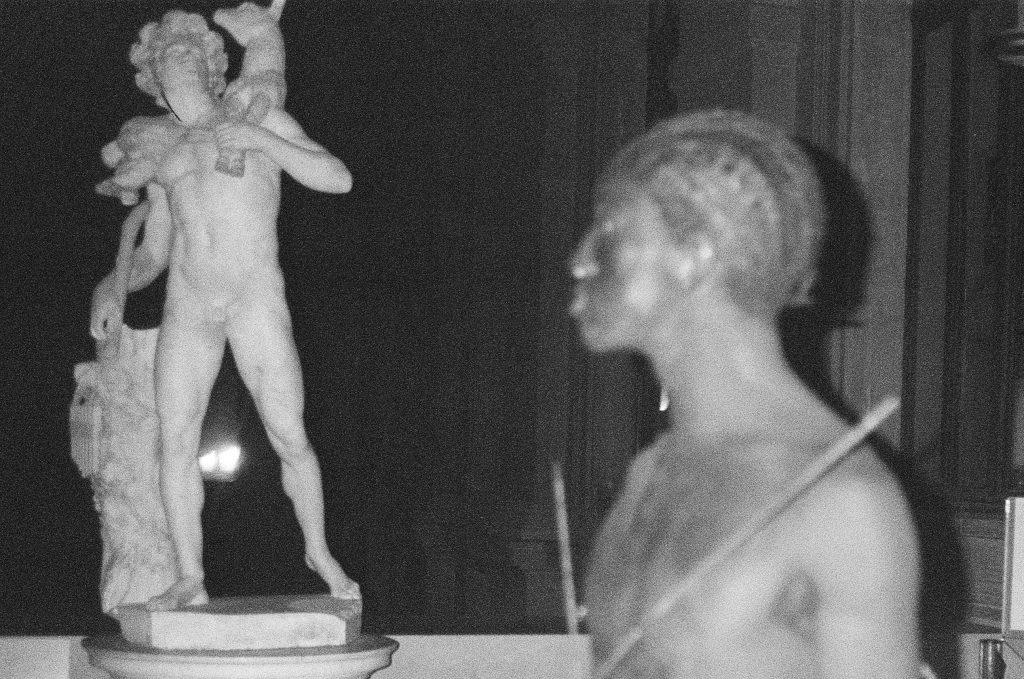 I really liked this guy with his goat. 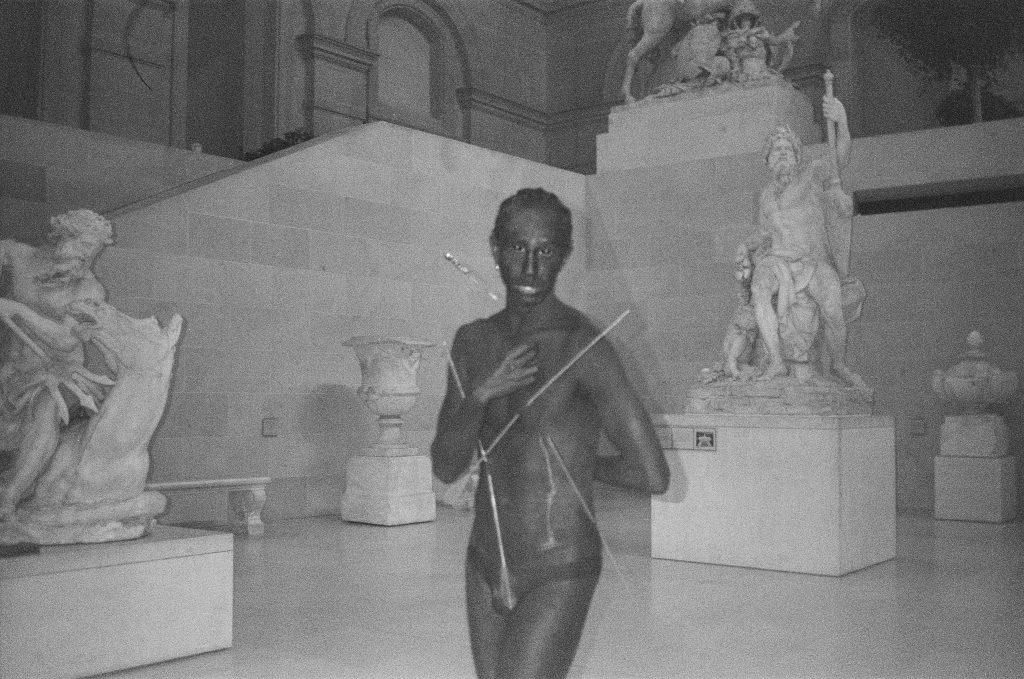 I performed about five hours as Saint Sebastian. Starting completely immobile, I very, very slowly would shift into every pose of his I knew from every painting, sculpture and etching in my memory. I felt the arrows like beams of light shooting through my body while I felt my heart rate slow in the freezing cold empty stone room. I became a stone, too. 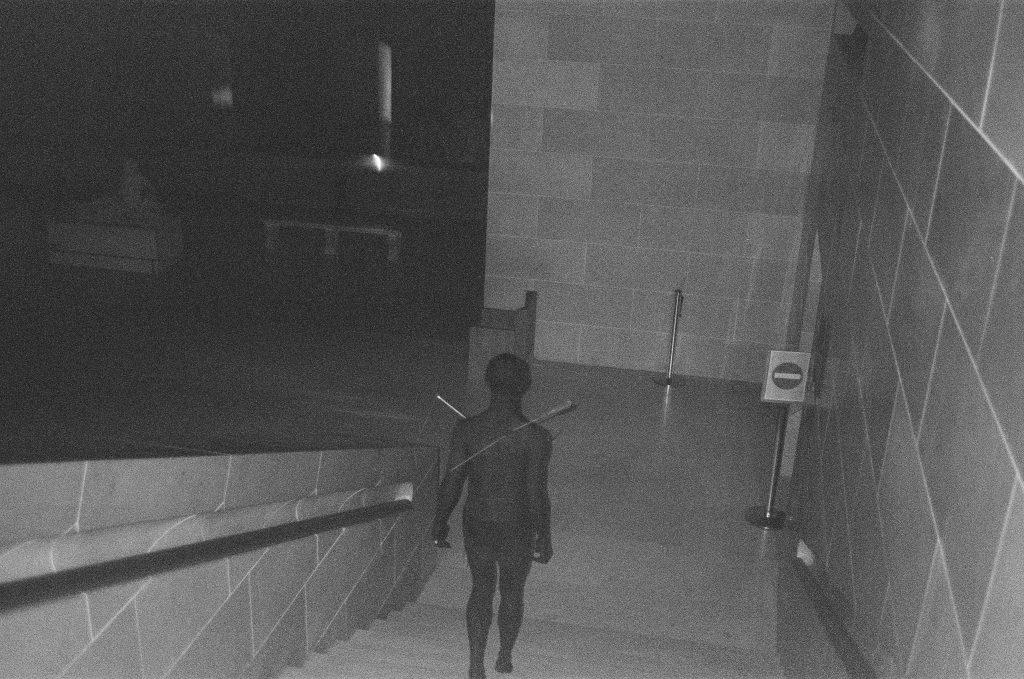 After about an hour of quasi-stillness, I gradually began to ambulate through the space. Eventually I started going up and down stairs, interacting with the other sculptures, lying down, playing with the arrows, even running. My brain began to shut off then and everything was intuitive—I barely remember what I did. 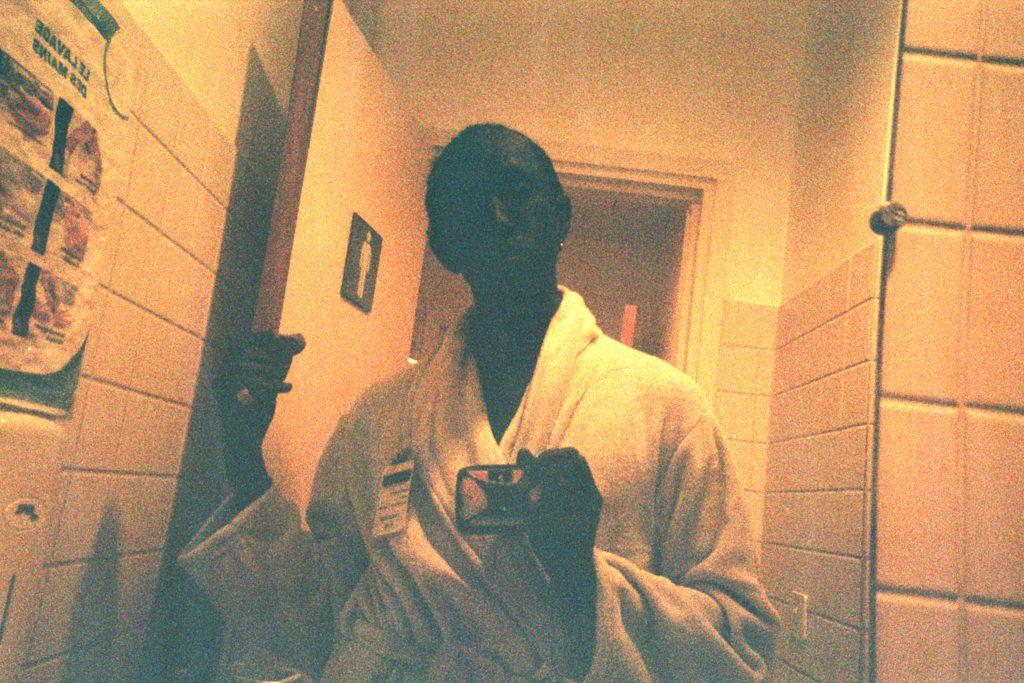 After five-ish hours were up, the Océane came back down and we took out the arrows, one by one. I suddenly felt very cold. She patched me up as they started to pack the equipment. I called cut, the crew wrapped, and while I sprinted up to the break room, sat down absolutely giddy and ate half a loaf of rice bread. I asked the curator if I could go see the , I was flatly denied. 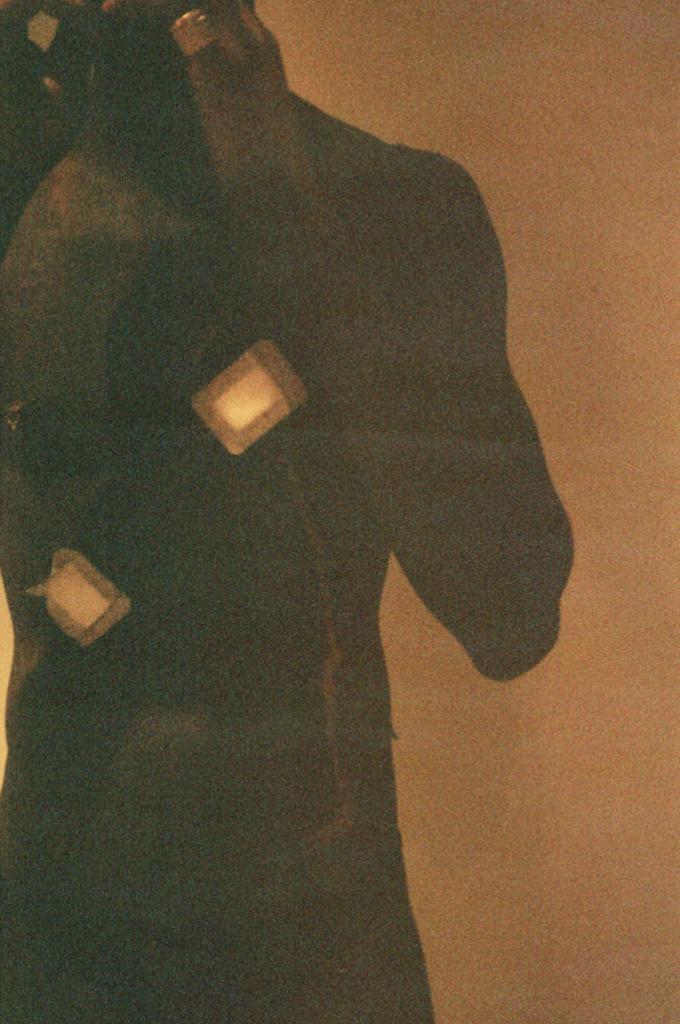 We were led out of the Louvre through the glass pyramid. The security guards escorted us all with a flashlight out into the moonlit atrium, where we were greeted by the sound of german shepherds (!!!!!!) gnashing their teeth, ready to run after us. We hurried out of the building, all laughing and out of breath. The outer fence was closed for the night, so we had to toss all the camera equipment over and scale it to get out. I lit up a celebratory cigarette, like someone who’d just had sex. We all lingered a bit after having shared such a surreal experience, but eventually said our goodbyes. 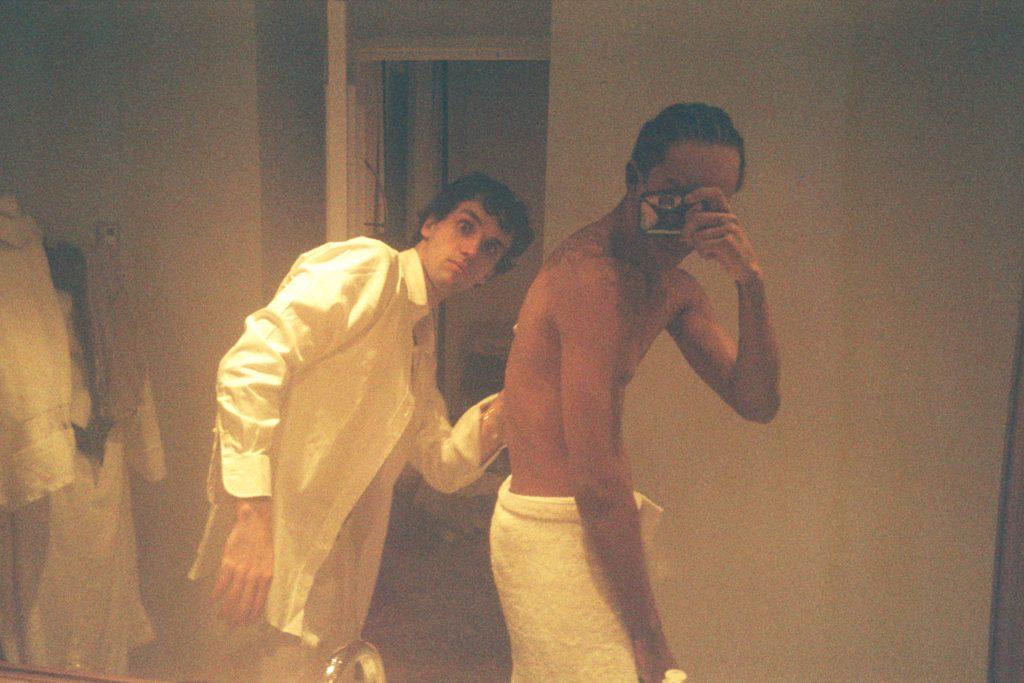 Viðar and I got back to our hotel room around 1:30 or 2 a.m. I took three long showers (the bathtub looked like we’d performed an exorcism in it by the time I was finished), and then we crawled into bed and watched until we passed out. I slept for about 10 hours. 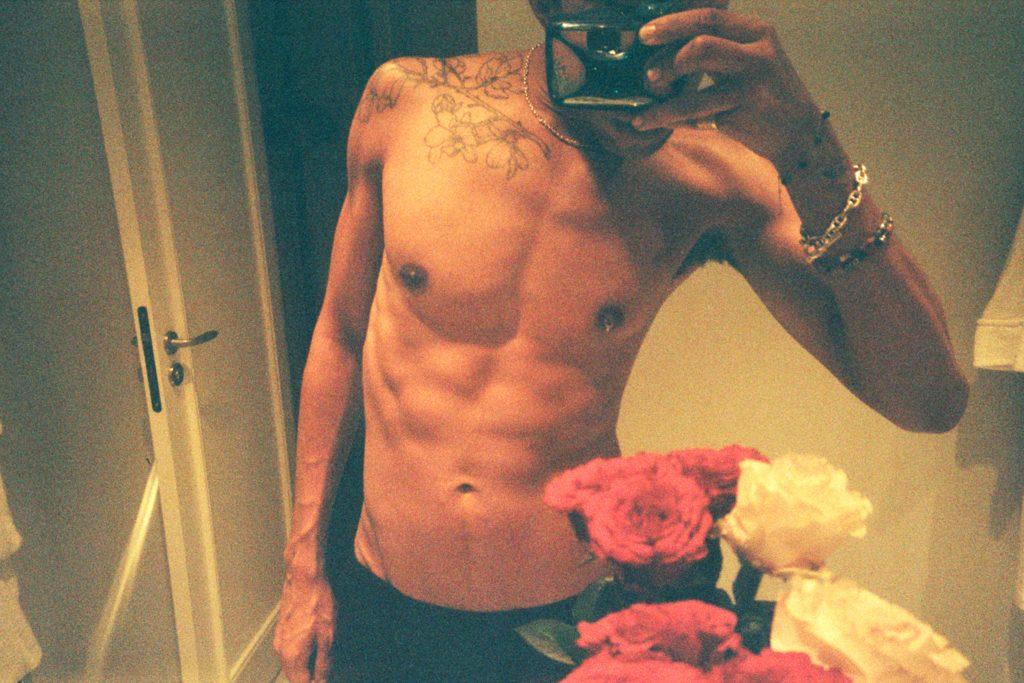 The scarring was very minimal the next morning, you could barely see them. I felt fine the next day, just a bit sore.