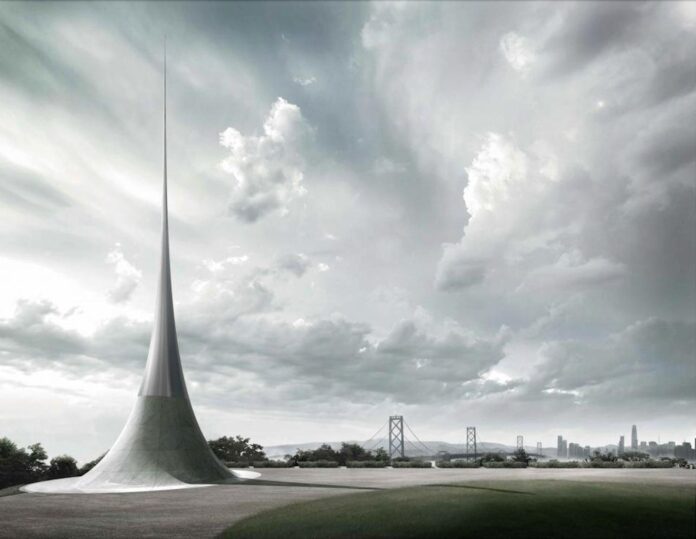 The San Francisco Bay will soon be home to a monumental site-specific sculpture by the artist Hiroshi Sugimoto. Point of Infinity, a nearly 70ft-high stainless steel needle that also acts as a sundial, will sit atop Yerba Buena Hilltop Park on Yerba Buena Island. The work’s sky-scraping dimensions required clearance from the Federal Aviation Administration and will be visible from multiple sightlines in the city, particularly the iconic Bay Bridge.

The $2m public art commission is part of a $50m park development on Treasure Island and Yerba Buena Island, announced in June 2017. Overseen by the San Francisco Arts Commission on behalf of the Treasure Island Development Authority, the high-profile project drew more than 500 proposals that were whittled down to three finalists: Sugimoto, Andy Goldsworthy and Chakaia Booker.

Nearly five years after Sugimoto’s appointment, little about the project has been revealed—until now. As the San Francisco public art commissioner, Jill Manton, tells The Art Newspaper, “It’s taken a number of years. I’ve gotten used to saying it’s on ‘city time’—there was a long pause between the idea and the reality because it was a complicated project.”

Sugimoto himself has only just approved the final fabrication of the sculpture. The piece underwent “a dry fit” on 8 December to ensure that all its parts could be assembled correctly. The work will be shipped in February, and the journey to San Francisco’s port will take around two months. The opening is currently planned for May.

Point of Infinity is not an arbitrary title—the work is based on the mathematical formula for infinity. According to the artist’s project proposal, the starting point was “not to ‘make’ a sculptural shape but to ask myself what should be ‘given’ to this very specific place”. He set out to explore the limits of human memory and invention, conceiving “a hyperbolic curve that would suggest both infinity and eternity: two converging curved lines, getting closer and closer but never meeting”.

The sundial-monument also evokes the Tower of the Sun, the centrepiece of the 1939 World’s Fair in San Francisco, for which Treasure Island was originally constructed. A large stone will be etched with the position of the sun’s shadow on the vernal and autumnal equinoxes at noon. “The creation of the pyramids is shrouded in mystery. By contrast, this tower will act as a symbol expressing humanity’s yearning for the infinite even 50 centuries in the future,” the artist writes.

The commission came about somewhat circuitously, Manton explains. She had approached Sugimoto’s San Francisco dealer, Fraenkel Gallery, to ask if the artist would be interested in creating a public work for San Francisco International Airport, and then casually mentioned the Treasure Island opportunity. “Once he heard about it, he was dead set on applying,” Manton says. “I have to say that Sugimoto’s [proposed] work really was singularly the most stunning and exquisite.” The project was put to a selection panel (and presented to the public, though they didn’t have a direct vote) which chose Point of Infinity.

A city like San Francisco, known as a haven for both artists and patrons, is often caught between serving community and capital interests. When the development masterplan was first unveiled, Manton caught wind and petitioned the mayor’s office to “make Treasure Island a destination for the arts” that would “benefit the public realm instead of private art on private property”. Through the city’s Percent for Art policy, which levies a 1% fee on private developers to finance public art initiatives, Treasure Island “will generate about $50 million over the 20-year course of the development project”, she explains.

Sugimoto’s project is the first big step in achieving that plan—but it doesn’t end there. The San Francisco Arts Commission has recently engaged five photographers to document the evolution of the island over the next year, launched a youth photography programme, and temporary exhibitions of public sculptures are in the works. The organisation is also gearing up to commission a public artwork for the city’s Waterfront Plaza. All of this is “not only cultural development, but community engagement and urban development”, Manton says, adding: “I feel like this very much fits into how the arts can be utilised for the greater good.”