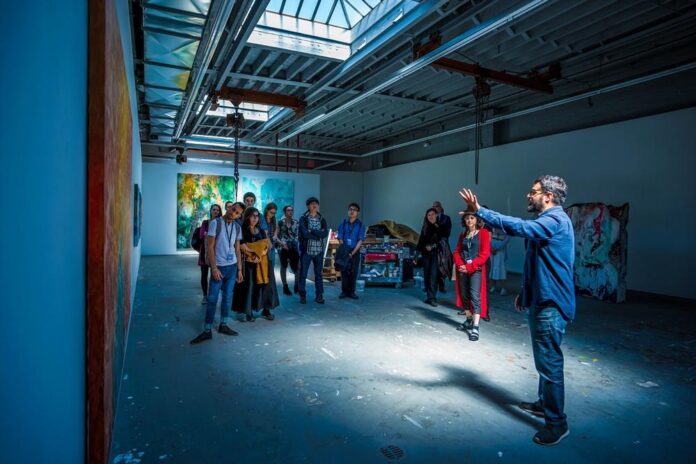 This fall, Theaster Gates is opening a major survey of his work at the New Museum. Gary Carrion-Murayari, who is co-curating it, says the show will basically take over the entire institution. But planning the exhibition isn’t how the curator got acquainted with Gates’s work. He was introduced to it during a visit to the artist’s Chicago studio more than a decade ago, when Carrion-Murayari was looking for artists to include in the 2010 Whitney Biennial.

At the time, Gates wasn’t as widely known for his community-based practice as he is today; he was just starting out, having only done “a few projects in the city, and maybe a few things outside of Chicago at that point,” Carrion-Murayari remembered.

During the visit, a few things about Gates’s approach to his practice made an instant impression. First of all, unlike what many other young artists do, he didn’t put on “a slideshow presentation of everything he’d done at that point,” Carrion-Murayari said. “It was just a really genuine conversation about what he was trying to do with his work. And how he was hoping to impact the world with this incredibly ambitious, locally-specific project.”

From that moment on, “it was very clear to me that Gates was somebody who just truly believed in what he was doing,” Carrion-Murayari continued, “and had an unbelievable optimism about what art could do.”

In the end, Gates not only landed a spot in the Whitney Biennial, but built a lasting relationship with the curator. “It’s 14 or 15 years later, and we’re working together again on a completely different scale,” Carrion-Murayari said.

Clearly not every studio visit will end up going as well as this one did. But to leave room for a similar outcome, artists should remember: People come to your studios to learn more about you. So let them.

We asked leading curators, collectors and others what tips they had for young artists looking to stand out from the pack. Here are their suggestions. 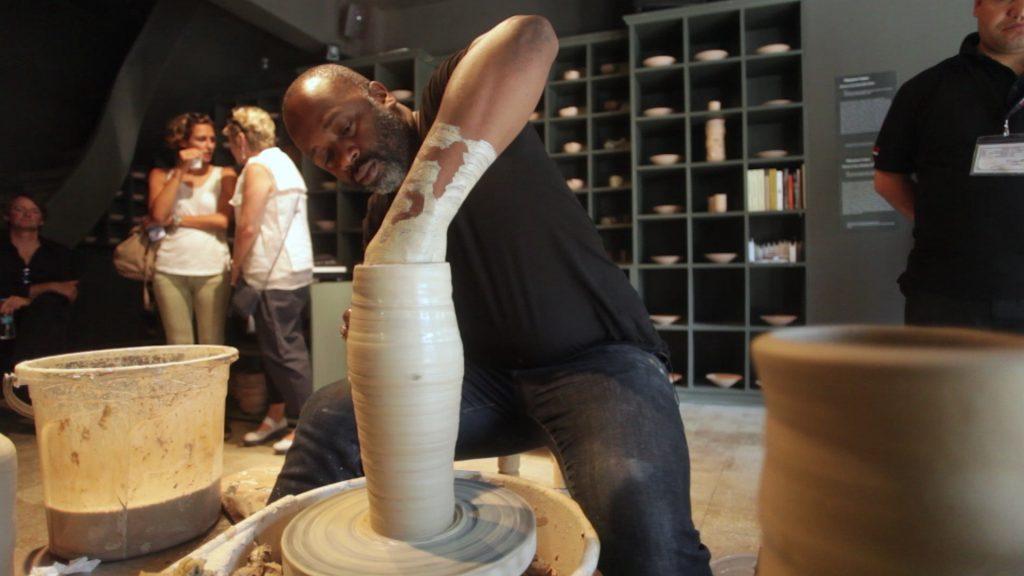 For artists, studio visits can sometimes feel like speed dating, as they try to make a connection with a potential patron or institutional supporter in a short amount of time. Because of that, “a lot of artists, especially on the younger side, try to run you through everything they’ve made, from grad school on,” said Carrion-Murayari, “and that’s oftentimes a bit overwhelming.”

Fellow New Museum curator Margot Norton agrees, saying artists “don’t have to share everything… like from birth to now.”

Essentially, artists should focus on what they’re currently doing and why they think the work is interesting. The person on the receiving end may or may not agree, but at the very least, your visitors will get what they’re looking for: “a good conversation,” Carrion-Murayari said, “and a sense of what’s urgent and exciting to an artist at that moment in time.”

Don’t Read Too Much Into Things

On the flip side of oversharing, Norton has also come away from studio visits feeling like she’s had to “pry information out of somebody,” she said. Artists—especially younger ones fresh out of an MFA program—tend to be guarded and might understandably read too much into innocuous behavior. “Because of how many critiques happen in art school,” Norton posited, “I think that people feel like your visit is a critique. But it’s not.” So artists shouldn’t immediately go on the defensive. 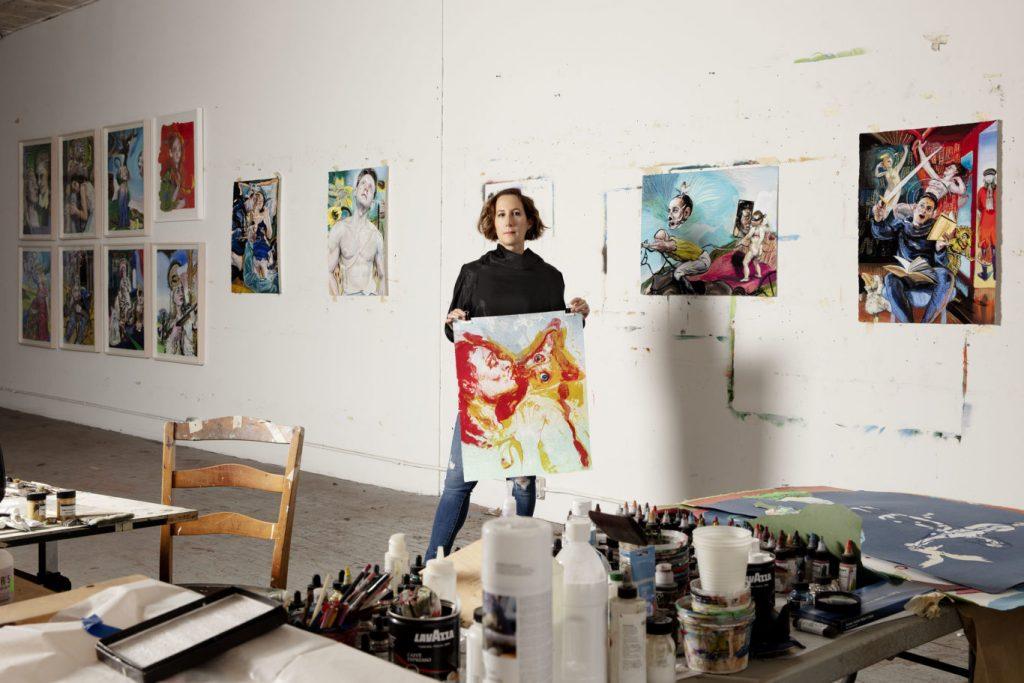 Natalie Frank in her studio with the work “Woman and Dog”. photo by Bunny Lake Films, courtesy of Her Clique.

Similarly, collectors or curators can be quiet during their visits to a studio. “And it doesn’t necessarily mean they don’t have thoughts or things that they want to say [about the work],” Norton explained. “They’re just collecting that information and seeing what sticks.”

As a longtime working artist, Natalie Frank has seen her fair share of visitors in and out of the studio. She’s come to realize that “people generally come to the studio with really good intentions,” she said. “It’s always important to remember that these people have complete lives and things going on that you have no idea about; that their schedules are insane and that you have their attention for a selection of time; and that it’s often not personal.”

Don’t Be Afraid to Ask Questions

There are so many different ways for studio visits to be worthwhile for artists—especially when they take charge.

For Lumpkin, it’s important for artists to understand their worth. Lumpkin largely supports emerging artists of color, and the work he tends to collect is a very “hot part of the market and there are a lot of galleries hounding artists and very eager to sign certain artists,” he said. (The art he has acquired with his husband is currently touring the country in the traveling exhibition, “Young, Gifted and Black: The Lumpkin-Boccuzzi Family Collection of Contemporary Art”, which stops at UC Davis later this month.)

Instead of artists jumping at just any opportunity that comes their way, they should pay closer attention to “where your work is going,” Lumpkin said, and whether or not the placements they are being offered—be it an exhibition or a spot in a private collection—are actually beneficial to their careers. 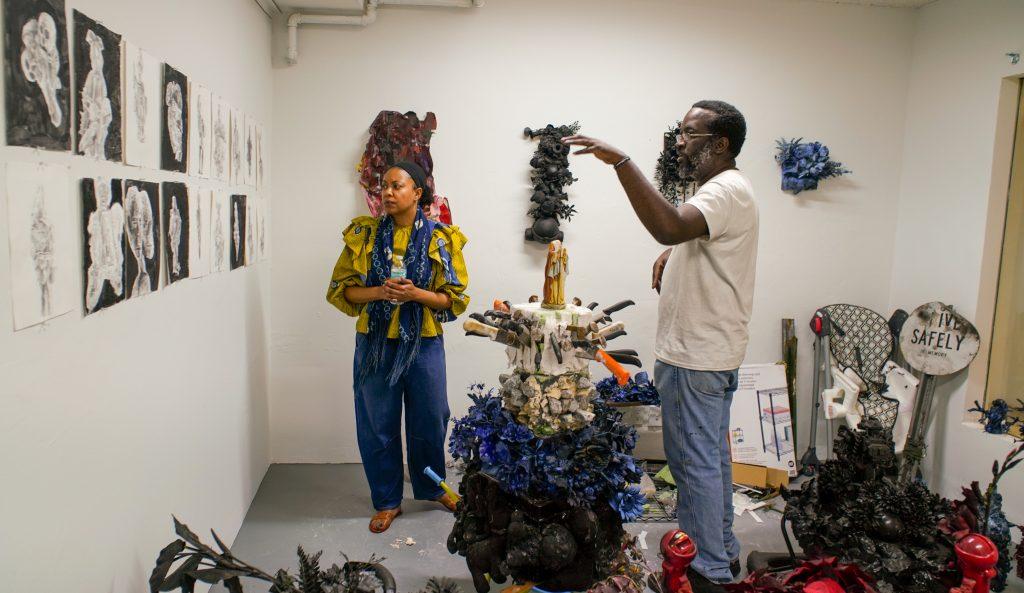 Afterall, everyone comes into an artist’s space with an agenda. “There’s no reason why an artist can’t ask the collector: ‘Tell me a little bit about your collection. I read that it is all figurative painting and sculpture. Where’s my abstract work going to fit in?’” Lumpkin added.

Learn about who is coming and what that person can do for you. It’s also not a bad idea to ask people for their opinions or suggestions.

“I think sometimes artists are hesitant to ask advice,” Frank said, thinking it may be a sign of weakness or inexperience. “But I think it is the best thing you can do when someone comes over—whether it’s in terms of the art itself or the direction of the work.”

Ask questions like: “What other artists should I be looking at? What curators are interesting to that person? What are they reading?” Frank suggested. This can be a way of “teasing out what strikes the visitor about your work, because I think it’s easy as an artist to get lost in your own head,” she added.

Artists can also find out how their art is resonating with people this way. “We want to be a resource for artists,” Carrion-Murayari said, “even if it’s not necessarily something that’s going to immediately lead to an exhibition at the New Museum.”

“As a curator, those visits may be coming out for a variety of reasons,” Carrion-Murayari noted, “It’s not necessarily like you’re trying to find your next show. Sometimes it’s just about getting to know somebody better.”

Even when it is a targeted visit, like when Norton went to see “literally thousands of artists” in preparation for the New Museum’s 2021 triennial, oftentimes “there isn’t something that’ll come of [the studio visit], like an invitation for an exhibition,” she said. “But it doesn’t mean that down the road there won’t be something. So don’t feel discouraged if after the studio visit, you don’t immediately have feedback or a show. It sometimes takes time.”

The studio visit is often a mechanism to “start a conversation,” Carrion-Murayari said, “and [nothing] could come to fruition [until] years down the road. But if I reach out to an artist, it’s because I saw something there that was interesting to me.”

Unmasking the Man Who Made a 20,000 Percent Profit on an Amy Sherald, an Oral History of the Jane Hotel, and More Juicy Art-World...