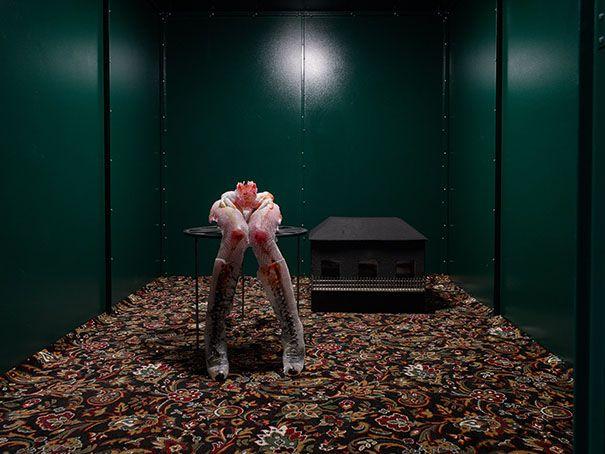 For the past seven years, the British artist-curator Lewis Teague Wright has organised art shows in the most transient and nondescript of spaces: the humble storage unit. “Lock Up International started from of a lack of London art projects that addressed physical space as a curatorial interest in an interesting way,” Teague Wright says. “This was in 2015, during the heyday of Peckham gentrification, and I didn’t want to open another art space that contributed to that.”

Instead, he rented a steel container in East London’s Hackney Wick for a month, during which time he held three consecutive shows, including one by the Canadian artist Steve Bishop that included a plastic bag full of fungal spores that could possibly help treat Alzheimer’s disease. The duration of exhibitions is typically short—one week for a solo show and three weeks for a group—which gives it a feeling of urgency akin to a happening. The list of around 35 artists who have taken part over the years is a mix of cult favourites, including the genre-bending Genesis P.Orridge, and cool and conceptually driven makers such as Yuri Pattison and Jack O’Brien.

Typically located away from the city centre, Teague Wright enjoys that there is an aspect of voyage required to see these shows; he wryly compares it to visiting New York’s Dia Beacon. He is also interested in the ubiquity of the storage unit and its aesthetic. “Steel walls and concrete can be found everywhere. No matter where you are in the world, it never changes,” he says.

He has certainly had the opportunity to test this theory out: the project has travelled to far-flung locations including Tokyo, Istanbul and Los Angeles. “Every time I’d fly abroad for a show I’d stage a Lock Up,” Teague Wright says. Much of the organisation is ad hoc—works are shipped in the suitcase of friends to keep costs down. Visitors typically message Teague Wright to arrange a private viewing—adding to the underground and clandestine nature of the project. These have taken place at all hours and under all levels of sobriety: “In Turkey I had someone visit the show at 3am following an afterparty,” he says. “I probably wouldn’t do that again.”

On an economic level, the benefits are obvious. Storage units are considerably cheaper to rent than a pop-up space, Teague Wright points out. This is especially true in the US, he says, where you can rent a unit for $1 for the first month—a price typically offered to entice customers and then trap them into a longer-term subscription.

And while the project has since evolved to occasionally consider other lockable spaces—such as an abandoned bank in Frankfurt whose lockboxes were filled with individual artworks, or a laundry airing cage on a roof in Mexico City—the storage unit remains at its core, not least because it also allows a pointed commentary on the mechanics of art collecting. After all, much of the art that a traditional gallery puts on show is purchased only to be placed in storage containers at freeports anyway, Teague Wright says: “Really, I’m just cutting out the middleman.”