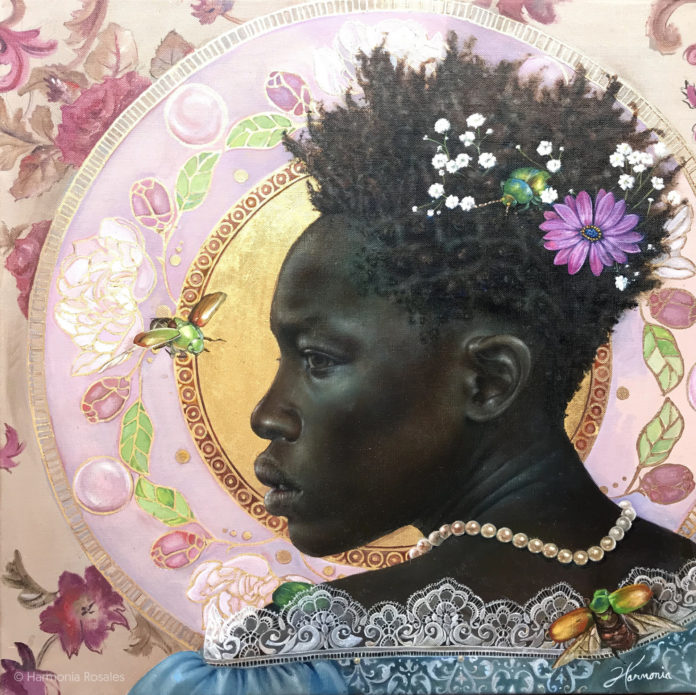 Chicago-born artist Harmonia Rosales says her striking portraits speak to “the part of me that has been the least represented in our society.” Rosales tells Colossal that much of her work⁠—⁠she largely features a central black figure surrounded by floral and animalistic details—is linked to her Afro-Cuban background. “I empower women of color through art that challenges ideological hegemony in contemporary society,” she writes. “The black female bodies of my paintings are the memory of my ancestors expressed in a way to heal and promote self-love.”

In “Harvest,” a seated woman holds three children, while two others gather at her bare feet. A small stack of nondescript books, a brown skull, a broken string of pearls, and a writhing snake line the steps, providing contrast between the natural and human-made elements. Although she often utilizes religious iconography, like in her Orisha’s series, Rosales says she hopes instead to give her viewers healing tools rather than spiritual indoctrination. Frequently offering alternative portrayals, Rosales’s 2017 work “The Creation of God” garnered viral attention because the artist presents God as a black woman.

Rosales’s upcoming project Miss Understood, which considers the relationship between feeling dissociated from ancestral cultures and still trying to protect that history in America, will be on view at MoCADA in Brooklyn from February 28 to April 16. Head to the artist’s Instagram to follow her profound projects, and check out the pieces she has for sale on Artsy.