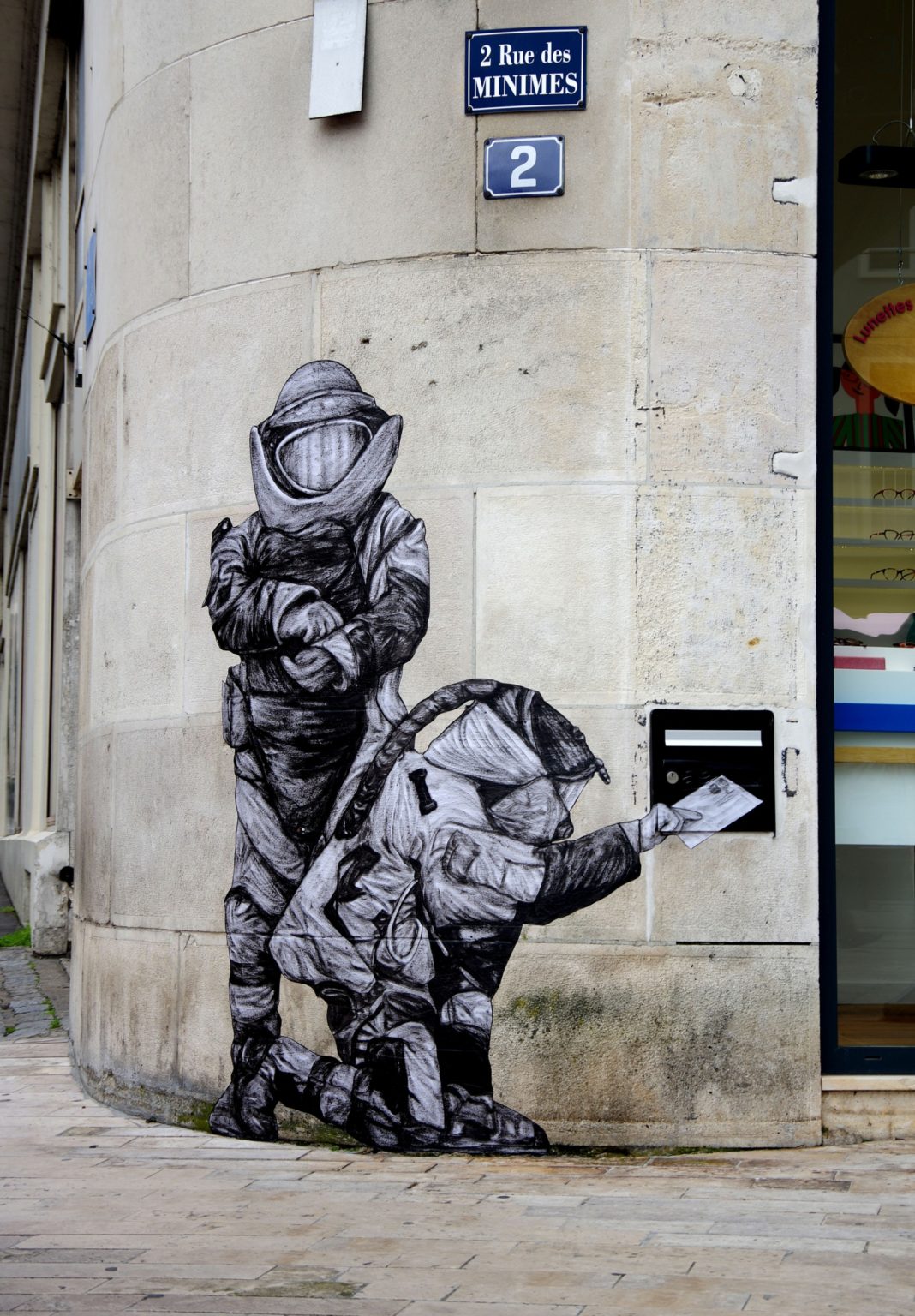 Artist Levalet  headlined this year’s Roads Street Art Festival, which brought together street mosaics, basketball, DJs, and more in Orleans, France this past April. For the festival, Levalet (a.k.a. Charles Leval) created several new craft paper and India ink works which include a large-scale chamleon, hazmat suit-clad mailmen, and car crammed onto the side of a glass elevator shaft. 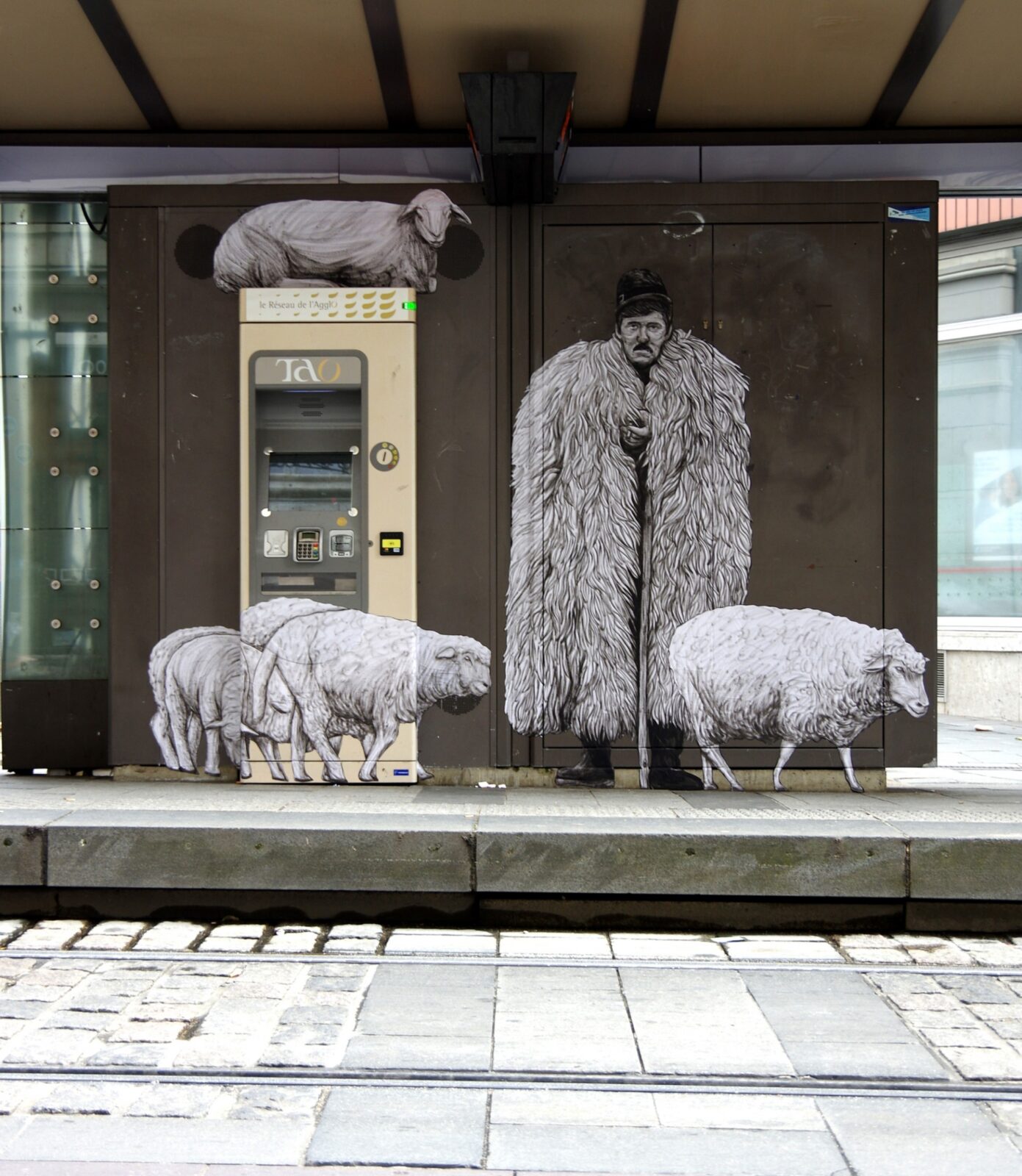 Street art has been taking a huge upswing during the 21st century and we’ve truly seen some rather astonishing pieces adorn the streets of the cities throughout the world. Recognised by the art world as a movement, it started appearing even within the gallery walls and many have gained critical acclaim in those circles. One such artist is Charles Leval, aka Levalet, who not only creates amazing street art, he develops it in a personal style. A French artist who takes advantage of Paris’ architecture, combining his knowledge of theatre and painting especially, with a keen eye for topography, Levalet produces site-specific scenes painted with Indian ink. 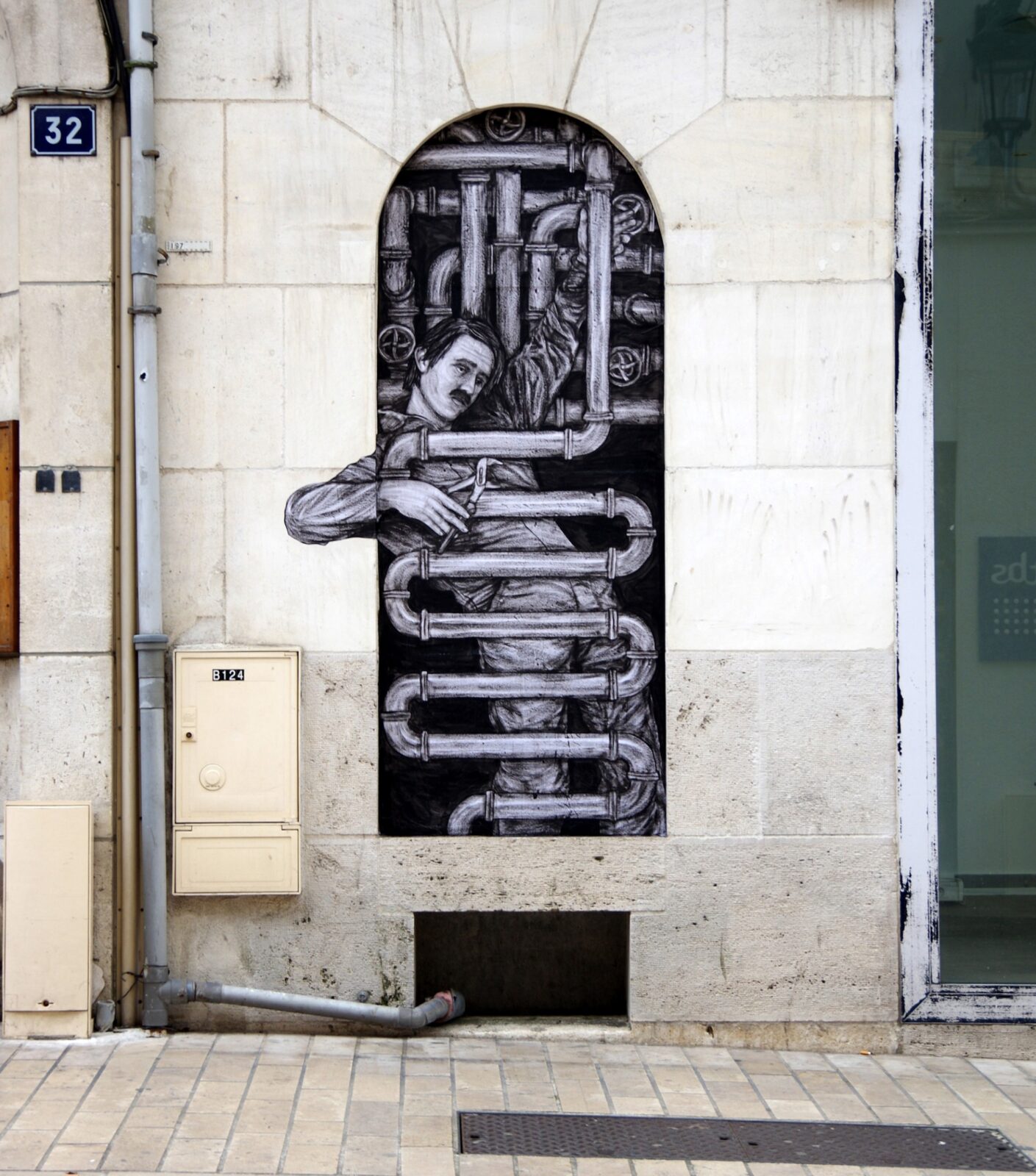 He was born in Epinal and spent his youth in Guadeloupe where he experienced urban graffiti culture. He trained initially in Strasbourg, studying painting and then animation. Interested in video installations located on the streets, Levalet developed a style which focuses on an interaction between the subject of the artworks and the dimensions and features of the space they’re in. For Levalet, urban art is part of the identity of the city, and the technicality of defining private property gives the idea of public space a new dimension. Inspired by the likes of Blek le Rat, Krzysztof Wodiczko, and Zevs, Levalet aims to explore the architectural diversity of Paris, favoring alleys and passages which create an immediate intimacy with the viewer. A lot of thought goes into location too as each piece usually interacts with its environment in one way or another. “Topography is very important for me, this is why I always check a place out before I work on it, I try to mix the world of representation with the real world by playing on the physical cohesion of the situations I put up. Architecture supports my work. Then I work on staging the artwork with photographs.” 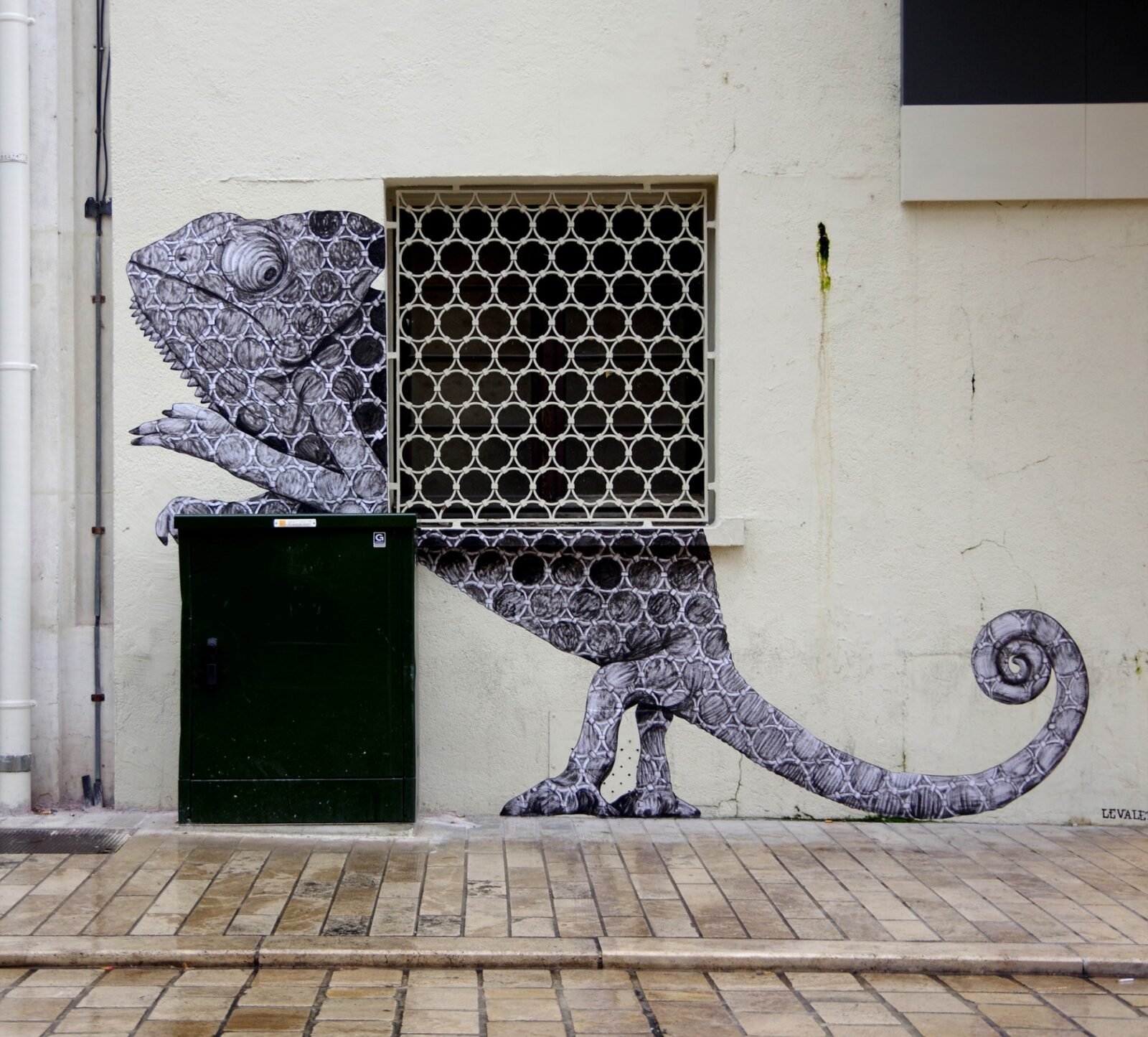 This artist injects humor into the streets of Paris by gluing animal and human-shaped paste-ups onto walls. Levalet also fills concrete recesses and jagged sidewalks with black-and-white figures. His paste-up people made in ink on white Kraft and then glued walls, first spotted on Colossal, end up interacting with their environments in interesting ways. In one work, two paper and ink fencers battle with a real umbrella, collapsing two dimensions into a single installation. Levalet has created realistic street art figures across the streets of Paris. His work was achieved by careful location of the perfect spots and accurate measurements as well as inspirations when drawing. 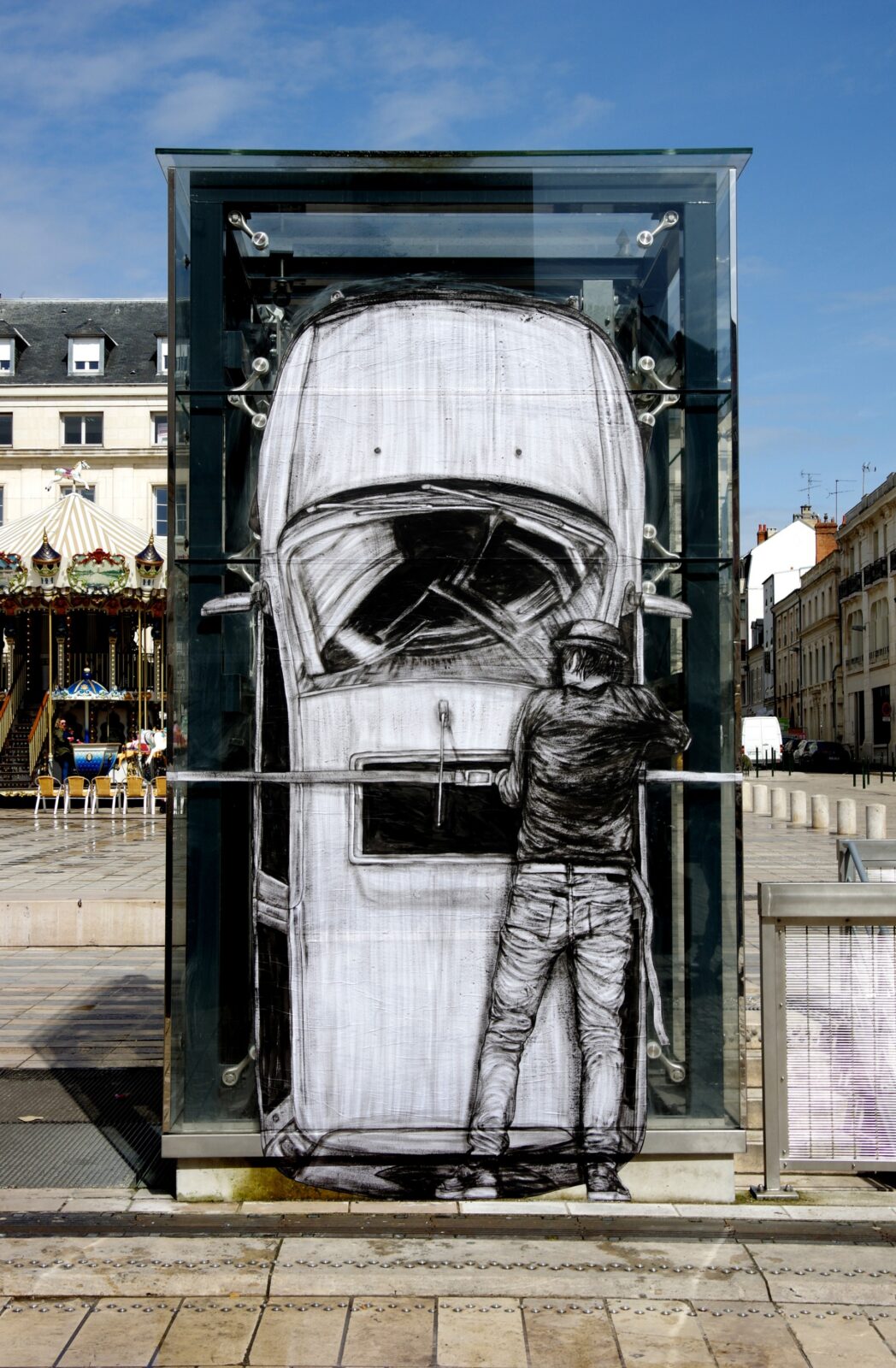 Charles Leval, also known as Tourist traffic, moves in the balance between poetry and social protest. His pieces are dynamic and dark paste-up tell everyday moments through paradox or aggravation, being critical and playful at the same time. His pieces, interacting with their environment, hide, climb, and often include three-dimensional objects transformed into urban installations. 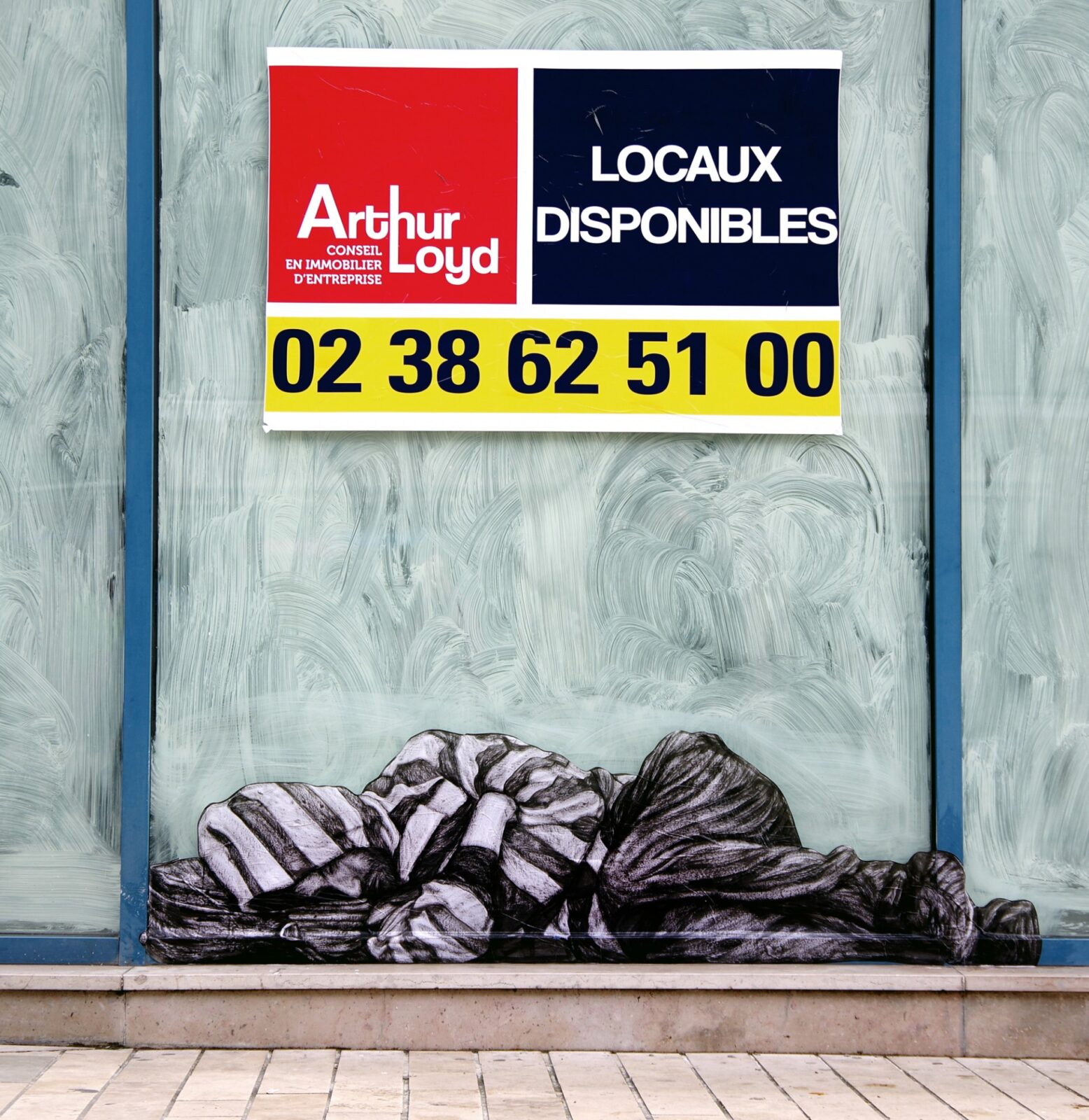 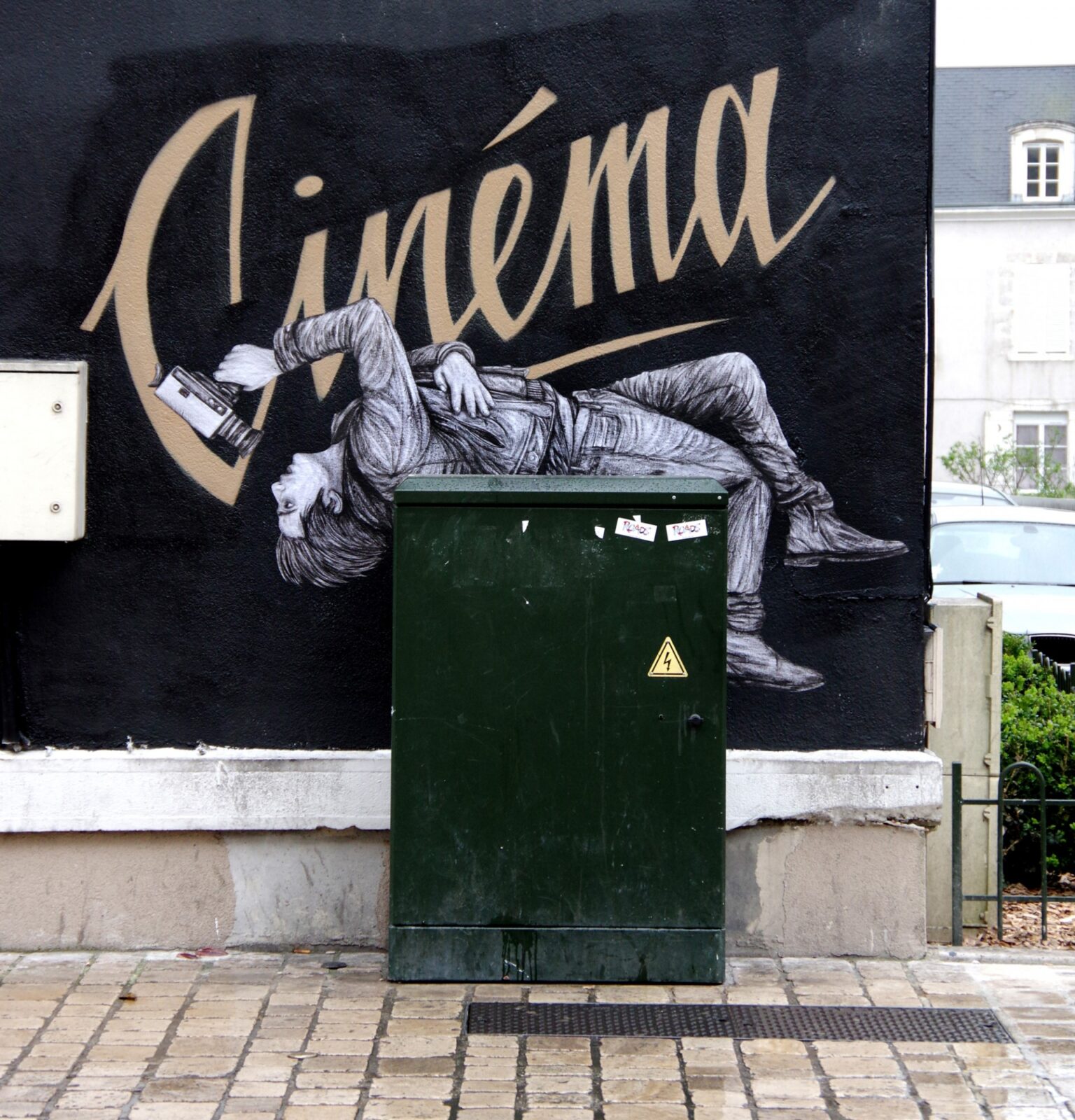 The artist has an upcoming solo exhibition titled “The Big Gaité,” that opens at Maison Triolet Aragon in Saint Arnoult-en-Yvelines, France on May 26. You can follow more of Levalet’s public installations on his website and Facebook. (via StreetArtNews)