Home News 300-Year-Old Hindu Relics Stolen from an Indian Temple a Decade Ago Have... 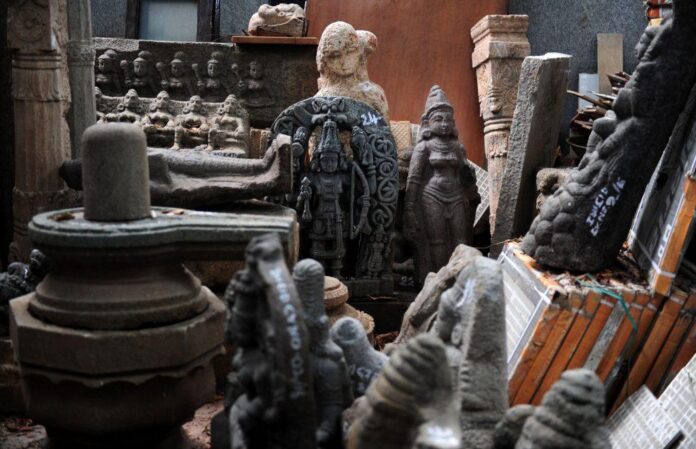 In southern India, the Tamil Nadu Police department’s Idol Wing unit—charged with tracking down looted artifacts—cracked a decade-old cold case this week when it recovered seven missing Hindu idols, including three stolen from the Adhi Kesava Perumal Temple in Ulundurpet, Kallakurichi district during 2011. Idol Wing director K. Jayanth Murali said all three stolen statues will return to the temple soon. Although the relic-focused task force successfully traced another stolen idol to Christie’s earlier this year, Murali reckoned this latest success will mark their first completed restitution of lost relics to a temple.

Durairajan said she’d purchased all seven idols from a recently deceased art dealer and known smuggler named Deenadayalan, of the Aparna Art Gallery, in 2008 and 2015. She shared signed and dated receipts for four of the idols in question, but couldn’t produce the same paperwork for her statues of Perumal, Sree Devi, or Bhoodevi. Authorities found the undersides of the bases on two of those outstanding idols inscribed with “Adhi Kesava Temple,” confirming they’re the purloined items.

Idol Wing agents then probed temple staff, who recounted the July 2011 theft of their Perumal, Sree Devi, and Bhoodevi idols. One temple expert confirmed that photos of the statues found in Durairajan’s residence are of the same pieces they lost. Kallakurichi district police closed the cold case in 2013, but now it’s been reopened and transferred to Idol Wing’s purview.

Next, Murali said their team will question staff at the Aparna Art Gallery to determine the nature of Deenadayalan’s involvement in the case. Durairajan, meanwhile, is on the hook for possession of stolen antiques. As such, her remaining four idols, all registered with the ASI in 2008, are being treated as contraband. Authorities are working to trace the relics’ true temples of origin, and have submitted each statue’s specs to the Hindu Religious & Charitable Endowments Department for potential identification.

Wet Paint in the Wild: Fort Gansevoort’s Adam Shopkorn Travels to the Canadian Arctic for One Very Chilly Studio Visit