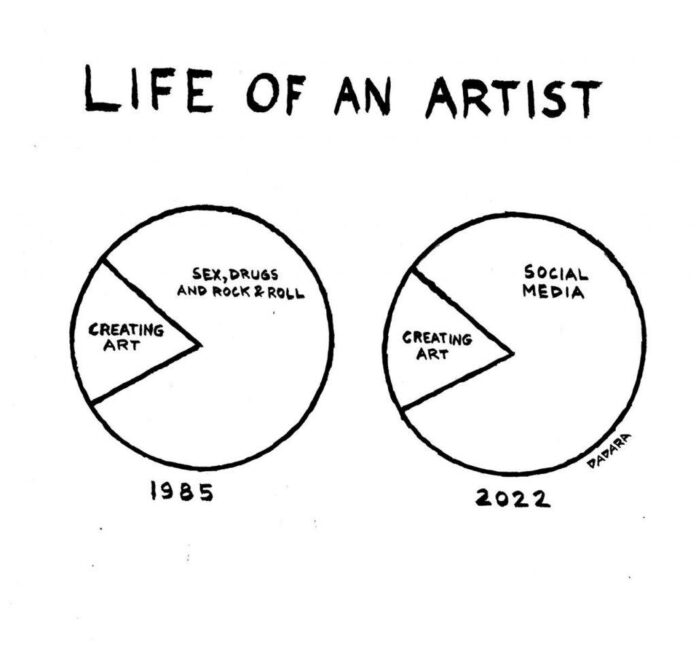 In a year that opened with a gold cube landing in Central Park and concluded with A.I. rising to test the limits of artist copyright, the internet had much to chew over when it came to the art world in 2022. And more often than not, the cyber crowd opted to do so via the medium of the meme—that instantly recognizable, occasionally humorous piece of content that’s come to infect most online conversations.

As a shared language, memes didn’t just document some of the year’s art-related moments, but lightened entire situations with side-eying drollery and wackiness. Below, we’ve picked some of the choicest memes that captured 2022 in digital shorthand.

‘i will avenge u mr van gogh’

In one of Just Stop Oil’s most high-profile protests, the climate activists hurled an entire can’s worth of tomato soup at Van Gogh’s Sunflowers in London’s National Gallery in October. The painting was protected by a glass screen, but rapper Lil Nas X nonetheless thought a comeback was in order, offering a photoshop job of him flinging Sunflowers at Andy Warhol’s soup cans. “i will avenge u mr van gogh,” he wrote.

i will avenge u mr van gogh pic.twitter.com/FnB6Q2RHyY

In January, Art Basel announced the launch of Paris+, its new fair that would take place in the Grand Palais in October—effectively occupying the venue and time slot that have long been reserved for FIAC. When Paris’s flagship fair received this knock on its standing, the memes wrote themselves.

For a few years now, internet memes have abounded about the British Museum’s historical penchant for taking other people’s stuff, an observation that is not entirely unfounded. But it’s the “No one:” meme that has captured the museum’s acquisition policy in ways both savage and spot on, again and again and again.

In February, the Pixelmon NFT project rode on the twin tides of hype and anticipation to bring in $70 million at mint. But the big art reveal, featuring low-res graphics and malformed characters, instantly deflated all speculator buzz. The only one to have weathered the entire calamity was Kevin, the Pixelmon creature and “ugly zombie squirtle,” who survived, thanks to his extreme meme-ability. And he remains a mark of hubris in the age of crypto.

Kevin has taken the NFT world by storm after being born out of the #Pixelmon disaster. Can’t wait for all the Kevin derivative projects. 😆 pic.twitter.com/4LzJGiut4s

Because stock Halloween costumes no longer sate postmodern appetites, the Spirit Halloween meme arrived on the world stage with photoshopped, fake ensembles that ranged from the lame to the rude to the pretty funny. The ones below, courtesy of the ever-reliable @jerrygogosian, also happen to be downright relatable for art insiders.

Heidi Klum as a worm

Model Heidi Klum, whose raison d’etre these days seems to be “winning Halloween,” dressed up for the holiday this year as a worm. The now-infamous costume was the product of her latest and continued collaboration with Mike Marino of Prosthetic Renaissance, and took months of planning. And all for what? Wonderful memes.

Heidi Klum is reportedly in talks to play Leto II in ‘God Emperor of Dune’ (2053) pic.twitter.com/sCLnpQvEAA

gonna tell my kids this was Heidi Klum pic.twitter.com/YhbaPx3WYk

And lead us not into temptation … pic.twitter.com/8qNOXzwXS9

When TikTok creator @itsreefa stumbled upon an “art project” in the wild—involving an individual decked out in an elaborate costume and giant orange wig, and a car blanketed in tinfoil—he offered the high praise: “Okay, I like it, Picasso.” It’s a line that has since gone around the social media sphere twice over, being handily applied to this, that, and any art project whether by Picasso or not. (The artists featured in the original TikTok, by the way, are part of Array Studios.)