A 13-foot-long painting by Edvard Munch that survived World War 2 is set to hit the auction block on March 1 at Sotheby’s modern and contemporary art evening sale in London, with a presale estimate of between £12 million to £20 million ($15 million to $25 million). was hidden in a barn from the Nazis alongside a version of  and it has been 89 years since the work last appeared in the market.

The sale of the storied painting was made possible thanks to a restitution settlement agreement between heirs of the artist’s friend, Thomas Olsen, a Norwegian shipping businessman, and heirs of a patron, Curt Glaser, an art historian who was the owner of the painting from 1912 until 1933. When he had to flee the Nazis, Glaser was forced to sell the work, which was then acquired by Olsen in 1934; it has been in the family’s collection since then. It is understood that sale proceeds will be divided by the two families. Both Glaser and Olsen had personal relations with Munch at the time, and the artist painted their wives, Elsa Glaser and Henrietta Olsen.

The journey of follows a similar trajectory of , which also changed hands from Glaser to Olsen over the course of history. It sold for more than $22 million (including fees) in a 2021 Sotheby’s sale in London. Currently, Munch’s auction record stands at $119.9 million, which was achieved in 2012 at a Sotheby’s New York auction for the sale of , a pastel on board from 1895, to American financier Leon Black. It was sold by Petter Olsen, Thomas Olsen’s son. 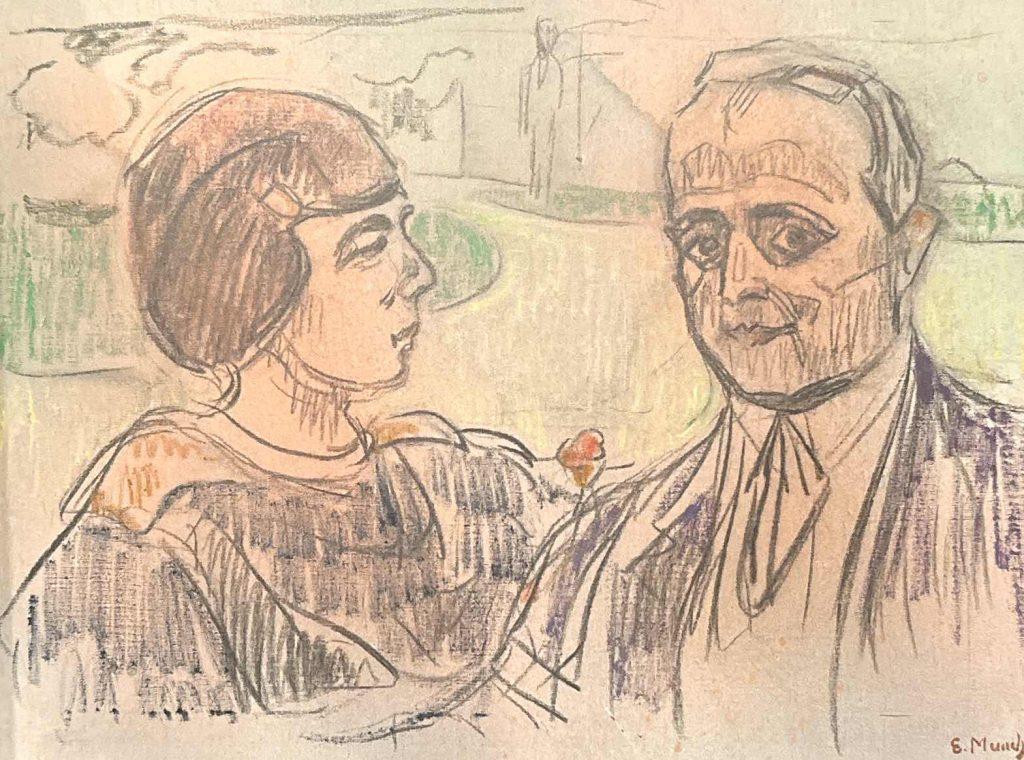 Sketch of Elsa and Curt Glaser by Edvard Munch, drawn in 1913. Courtesy of Sotheby’s.

was originally commissioned in 1906 by Max Reinhardt, a renowned film and theater director who was said to be greatly influenced of Munch; the painting became part of what is now known as “The Reinhardt Frieze,” at the director’s theater in Berlin. It belongs to one of the 12 canvases located on the theater’s upper level that intended to be an immersive installation that, in Munch’s words, consisted of “images from the modern psyche.”

The work that is offered at the Sotheby’s sale is the only one from this series available on the art market, while the rest of are all in museum collections in Germany, with nine in Nationalgalerie in Berlin, one in Hamburger Kunsthalle, and one in Museum Folkwang, Essen. The painting depicts two of the Norwegian master’s great loves, Tulla Larsen and Millie Thaulow, in the foreground.

Glaser, who was once the director of the Berlin State Art Library and the artist’s biographer, acquired the work in 1912 when Reinhardt’s theater was refurbished and the frieze was split up. The art historian and curator was then persecuted by the Nazis because of his Jewish background, and was forced sell the work in 1933 when he fled Germany. An exhibition of Glaser’s collection is currently being held at the Kunstmuseum Basel.

Several months later, the painting surfaced in the market in an auction in Oslo in 1934 and was acquired by Olsen, who had been a neighbor of Munch. had appeared in the first class lounge of one of Olsen’s cruise liners traveling between Oslo and Newcastle in 1939.

Olsen took it down when Britain declared war on Germany and brought all his Munch paintings, including and , to a barn in the Norwegian forest. has been in the hands of the Olsen family since then.

“This exceptional painting is made all the more special due to its extraordinary provenance, a history that has unfolded since it was painted 115 years ago,” said Lucian Simmons, Sotheby’s vice-chairman and worldwide head of restitution, in a statement. “We are proud to play a part in the painting’s next chapter.”

Clearing Gallery Has a Knack for Elevating Unknown Artists Into Blue-Chip Stars. Now, It Just Needs to Figure Out How to Grow With Them

Art Industry News: How the Viral Auction of Joan Didon’s Belongings Solved a Mystery About a Portrait Above Her Sofa + Other Stories