Home News A New York Nonprofit Has Filed a Lawsuit to Block the Smithsonian... 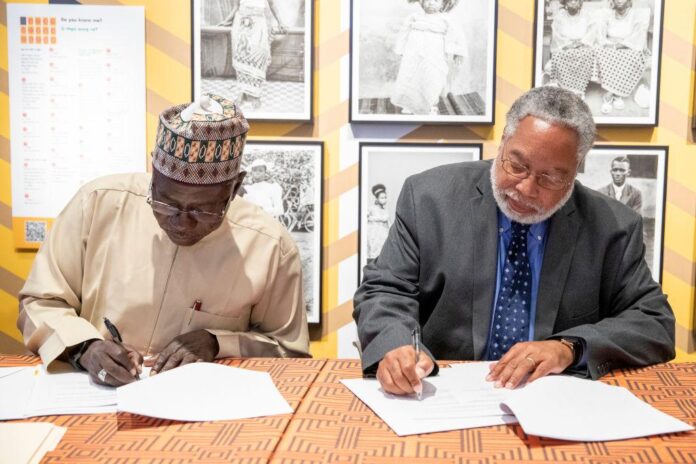 The move marked the culmination of a years-long debate over the fate of the objects, which had been stolen by British troops in an infamous 1897 raid on Benin City. But when the repatriation ceremony finally took place on October 11, the once-contentious debate felt more like a footnote. Everyone—academics, activists, museum professionals—generally agreed: returning the bronzes was simply the ethical thing to do.

Well, not everyone, it turns out.

Days before the ceremony, a New York nonprofit called the Restitution Study Group (RSG) filed a lawsuit against the Smithsonian, attempting to block the repatriation with an emergency temporary restraining order. The organization argued that, in returning the bronzes, the museum was in breach of trust for “failing to protect the interests of United States Citizens descended from enslaved people.”

In other words, RSG claims that the heirs of American slave have as much right to the Benin bronzes today as the Nigerian government.

“We study the bronzes as scholars, students, and descendants of the people who made them. We need access to them to study them,” explained executive director Deadria Farmer-Paellman in an email to Artnet News. “We suffer a concrete and imminent injury as a result of this transfer.”

We filed action against the Smithsonian Institution to stop their transfer of 29 Benin bronzes to Nigeria. Complaint and Exhibits at the below link:

RSG’s last-minute maneuver proved unsuccessful; the Smithsonian returned the bronzes on October 11, and the request for a restraining order was denied by a U.S. district court judge on the 14th.

However, the case isn’t necessarily closed. The judge invited RSG to file an amended complaint and Farmer-Paellman explained that she plans to do so. There are more Benin artworks at stake: a 2021 evaluation concluded that the 29 bronzes returned to Nigeria were looted from Benin, but an additional six are still being reviewed.

Farmer-Paellman, who founded RSG in 2000, is herself a descendant of slaves brought to the U.S. from the kingdom of Benin. She said she was happy for the Edo people in Nigeria, but “disappointed that the Smithsonian ignored our interest to have access to the relics and denies the slave trade origin of the bronzes.”

The director pointed out that the Benin bronzes were made in part from manillas, or brass and copper rings used as a form of currency in west Africa. Manillas were likely introduced by Portuguese traders who exchanged them for slave laborers.

The museum “refused to accept our claim as co-owners of the Benin bronzes, but we are the heirs of the people who paid for the 16th- to 19th-century relics with their lives,” Farmer-Paellman added.

The Smithsonian declined to comment on RSG’s claim, noting only that legal ownership of the bronzes now belongs to the National Commission for Museums and Monuments in Nigeria.

When asked if RSG intends to file similar complaints against other U.S.-based institutions planning to restitute Benin bronzes, Farmer-Paellman said, “we hope that won’t be necessary.”

“We want these institutions to recognize that we are proper beneficiaries and deserve to be considered in the decision-making around what happens to the 16th- to 19th-century metal bronzes,” she added. “We want Nigeria and the Benin Kingdom heirs to do the honorable thing—to share the Benin bronzes with us since our ancestors helped make them.”