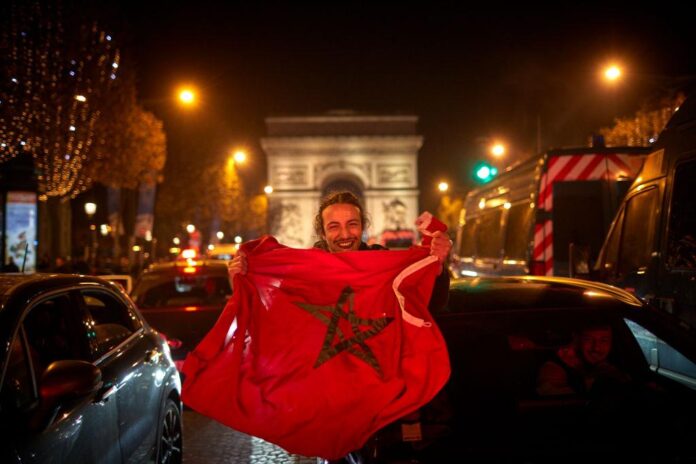 Moroccan drums and ululating women filled the air last night as fans braced through a hard-fought World Cup quarterfinal match between the underdog Moroccan team and the French former champions, which saw France win 2-0. But this was no sports bar, or even Qatar’s hosting stadium; this was the Arab World Institute (IMA) in Paris, a cultural center and museum in a Jean Nouvel-designed building in the heart of the city.

There were 500 to 600 fans gathered here, including many art-lovers, cultural workers, institutional members, and artists. Even former French culture minister Jack Lang had come to watch Morocco compete in the quarterfinals—a first for an African or Arabic team.

In France, which has a large population of North African background as result of French colonial rule, many saw the match as highly symbolic. “This is beyond soccer. It’s political and historic,” said Zoubida Debbagh, 24, who directs the IMA’s concert and performance program, also noting the art-adjacent crowd (not your usual soccer fans) that were there mixed in with die-hard sports buffs.

It was also a moment highlighting heated, long-standing tensions around France’s model of assimilation, and whether or not it sufficiently acknowledges and integrates the country’s diverse populations. Leading up to the game, far-right political figures questioned the loyalty of French citizens who supported Morocco in what is often referred to as a so-called identity crisis attributed to those of immigrant descent.

But at the IMA last night, fans rejected that notion. “There’s no identity crisis,” said filmmaker and cultural activist Yamina Zarou, who addresses these topics in her films. In France, she noted, “there’s a crisis around the recognition of our [many] identities, which can in fact live together very well.” Though she wouldn’t call herself a regular sports fan by any stretch, as a regular visitor to the IMA museum, she couldn’t resist the chance to witness the historic moment there. A French citizen of Moroccan background, Zarou said she was rooting for Morocco last night, because “this was a moment for Arabic countries, for Africa, for Morocco.”

Many said they saw in the Moroccan team a sorely needed, positive reflection of themselves, particularly in France, where they have not always felt welcome to openly celebrate their cultural differences. Last night’s match suggested that a more accepting and representative model was possible. “The Moroccan team inspired us and reminds us of all that we share—our humanity,” agreed Saida Essafiry, a French Moroccan multi-media visual artist living in Paris. She co-organizes a cultural, social and environmental space with Zarou called Verdragon in the Paris suburb Bagnolet, among other artistic projects.

France braced for street riots following the game, and a stronger police presence was put in place. There were reports of 167 people arrested in the Paris region, including some 50 armed far-right activists. A child was also killed in a car crash amid post-game street celebrations in Montpellier. Elsewhere, the match appeared to show signs of more unity and fair play than animosity and violence.

Yesterday, “France and Morocco came a lot closer to each other than they would have via political and economic acts. Instead, they came closer through sports. That’s what’s extraordinary,” said Fetah Ouzzani, a member of the IMA Friends Society, who is of Algerian, Moroccan, and French background.

“This is a friendly gathering,” agreed Jack Lang, the former culture minister, shouting above the noise from the crowd. He commended the hosting of the sports game at the cultural venue. “The IMA has to be open to everything—culture, science, politics—it has to vibrate,” he said of the institution, which featured an exhibition about soccer in 2019 as an important element of pop culture within the Arab world.

Amid the cries and dancing last night, it certainly vibrated.

Valuations: Artist Martine Gutierrez Tells Us About Her Island Dreams and Why Her New Favorite Dress Is Made of Toilet Paper