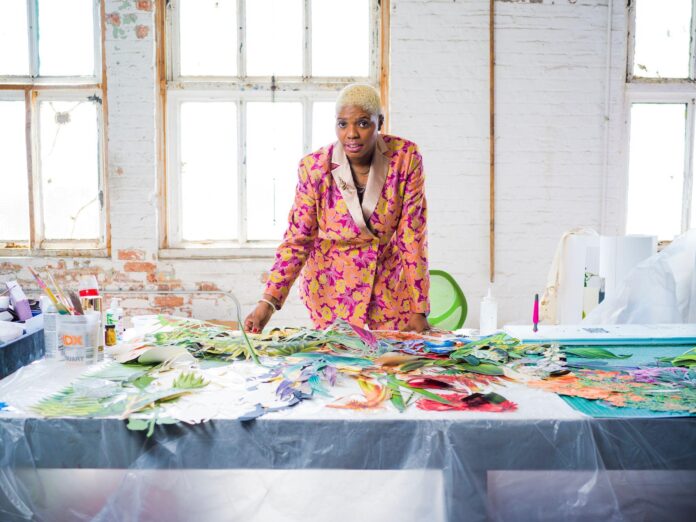 The artist Ebony G. Patterson, known for her maximalist sculptural installations and collages that often depict racial violence and systems of exclusion through a kaleidoscopic post-colonial prism, will co-curate the next edition of Prospect New Orleans, the city’s closely-watched triennial. As the first artist to curate an edition of the triennial, she will work on the 2024 iteration—its sixth, styled as “Prospect.6” by the organisers—with Miranda Lash, the senior curator at the Museum of Contemporary Art Denver, who was named as artistic director of the triennial in June.

“I have always been moved by the history and culture of New Orleans, and how it occupies a unique space in the US, as a much closer reflection of the richness of the global majority,” Patterson, who was born in Jamaica and splits her time between Kingston and Chicago, says in a statement. “There are so many practices that knit New Orleans together that generate and reflect both local specificity and global concerns. Through bringing my artistic background and perspective to the role and our collaborations with artists, I plan to centre the value of the artist.”

Patterson’s history with Prospect goes back nearly a decade. Her work was included in the triennial’s third edition, Prospect.3: Notes for Now, which was curated by Franklin Sirmans and ran from October 2014 to January 2015. She then served as a member of the triennial’s curatorial council for its fourth edition, Prospect.4: The Lotus in Spite of the Swamp, which was curated by Trevor Schoonmaker and ran from November 2017 to February 2018.

Patterson and Lash first met around the time of Prospect.4, when Lash and Schoonmaker co-curated the exhibition Southern Accent: Seeking the American South in Contemporary Art, which included the artist’s work. Patterson and Lash will now spend the next two years collaborating on Prospect.6 ahead of its planned opening in the autumn of 2024.

“Our conversations regarding curatorial approach, the significance of place, celebration and resilience, have led us in many exciting curatorial directions,” Lash says in a statement. “I am thrilled to see where our collaboration takes us as we assume the responsibility of engaging with such a layered and complex local art ecosystem, which connects to major global concerns.”

Prospect was founded in the aftermath of Hurricane Katrina by the curator Dan Cameron to support New Orleans’s cultural regeneration after the disaster. Cameron curated the first two editions, as well as the interstitial Prospect.1.5, which featured artists from New Orleans and Louisiana exclusively. The $5m cost of the exhibition’s first edition in 2008, when it was still billed as a biennial, led to its second edition being postponed by a year and executed on a much smaller budget of $2.4m. Since then, the exhibition has occasionally faced additional scheduling and budgeting issues, while also solidifying its standing as one of the most important and influential recurring exhibitions in the United States.

Ariel Pink Used an Artist’s Image on an Album Cover Without Her Consent. She Responded With a Series of Blistering NFTs