Home News A timeline of the $450m Salvator Mundi: centuries of deals, disputes and... 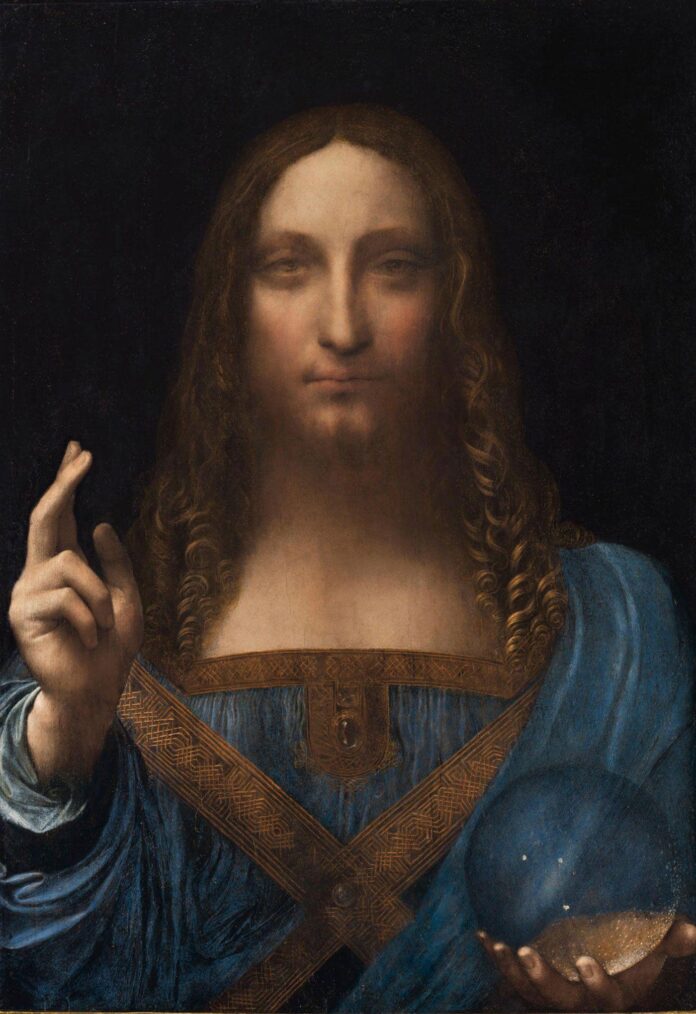 From an ongoing attribution debate to a patchwork provenance and multiple sales, the art world saga par excellence that is the $450m Salvator Mundi bears a long and chequered history. To get you up to scratch, we have charted (almost) every major development on the painting in the past 120 years. Buckle up, it’s a bumpy ride.

Leonardo supposedly paints a Christ the Redeemer lunette (much like a Salvator Mundi format) for the Santa Maria delle Grazie tribune in Milan, part of a project that began in 1492. It was destroyed during renovations around 1603.

Two red chalk drawings are produced by Leonardo for a Salvator Mundi. They are now in the Royal Collection.

A “Christ: with a globe in his hande done by Leonardus Vinsett” is recorded in the London home of James, 3rd Marquess (later 1st Duke) of Hamilton. This could have been one of 27 Salvator Mundi copies.

The Royalist Wenceslaus Hollar—then living in exile in Antwerp—makes an etching of a Salvator Mundi which is inscribed (in Latin): “Leonardo painted it” and Hollar etched it “from the original” in 1650. Although often compared with the Saudi Salvator Mundi, it has a full beard and a moustache.

“A peece of Christ done by Leonardo” from King Charles I’s and his wife Queen Henrietta’s collection is recorded in the Commonwealth sale of 1651, when Captain John Stone purchased it. In November 2017, Christie’s and others claimed (without proper evidence) that this was the Cook Salvator Mundi (that MBS would buy).

A “Leonard de Vince. O[u]r Savio[u]r w[i]th a gloabe in one hand & holding up ye other” is recorded in an inventory of King Charles II’s ‘Closet’. Christie’s and others seemed to think this was the Cook version restored by Stone to the King.

King George III purchases Buckingham House—now Buckingham Palace— and paintings that included a “Head of Our Saviour” by “L. DA. VINCI” (lot 53). This was the third king to possibly own the Cook Salvator Mundi, according to Christie’s and others in 2017.

Sir J. C. Robinson sells a Salvator Mundi attributed by Bernardino Luini for £120 to Sir Francis Cook, a British merchant and collector. This is the first documented evidence of the Cook Salvator Mundi.

It is sold, attributed to Leonardo’s assistant Boltraffio, on 25 June at Sotheby’s London for £45 to “Kuntz”. This is later established to be Minnie Stanfill Kuntz or her husband Warren E. Kuntz, who ran a furniture business in New Orleans.

The German scholar Ludwig Heydenreich writes in Raccolta Vinciana that there is no evidence that Leonardo completed a Salvator Mundi painting, for which two preparatory drawings by Leonardo exist, and that 12 versions of the painting by followers exist.

Upon her death, Minnie Stanfill Kuntz bequeaths it to her nephew, Basil Clovis Hendry Sr.

April—It is sold from the estate of Basil Clovis Hendry Sr. estate in New Orleans, to a consortium of art dealers, including Alexander Parish and Robert Simon, for $1,000 plus $175 commission.

The husband and wife Old master restorers Mario and Dianne Modestini begin work on the heavily damaged, substantially overpainted panel, repainting much of it.

Early in the year, the “restoration” is completed, according to Dianne Modestini. She did further work on the picture following the 2011 National Gallery exhibition. (Mario Modestini died in 2006.)

Martin Kemp, Robert Simon and Margaret Dalivalle begin their monograph Leonardo da Vinci’s Salvator Mundi and the Collecting of Leonardo at the Stuart Courts, which will be published in 2019.

The American dealer Warren Adelson begins his attempts to sell it, first to the Metropolitan Museum in New York, and then to other major museums.

July—Its new full attribution to Leonardo is first publicisedby Robert Simon, noting that there was “general acceptance” of the attribution by scholars, including Carmen Bambach, Pietro C. Marani, Maria Teresa Fiorio, David Allen Brown and Martin Kemp. (The first three of these scholars noted later that they did not at that point attribute the painting as a fully autograph Leonardo.) The news release also claimed that this painting had been in the collections of Kings Charles I and Charles II. ARTnews reports that the painting is on offer for $200 million, though Simon notes that it “is not on the market”. It is the first attribution of a painting by Leonardo in more than a century.

November—It is shown at a major Leonardo show at the National Gallery, London, where it is one of nine paintings attributed to the artist.

February—Carmen Bambach writes in Apollo Magazine that “much of the original surface may be by Boltraffio, but with passages done by Leonardo himself, namely Christ’s proper right blessing hand, portions of the sleeve, his left hand and the crystal orb he holds.”

May—Parish and a consortium sell it to the Swiss dealer Yves Bouvier in a private Sotheby’s sale for $75-80m; the Dallas Museum of Art also makes an offer but is refused, a museum spokesperson says.

Bouvier swiftly sells it for $127.5m to Dmitry Rybolovlev, who, it is thought, keeps the painting in a Geneva freeport storage facility until its auction in 2017.

Rybolovlev accuses Bouvier of swindling him out of almost $1bn over 40 major art deals, including for the Salvator Mundi, paving the way for multiple lawsuits—some of which are ongoing.

15 November—It is offered at Christie’s New York for “in excess of $100m”, the highest-ever estimate for an Old Master painting, and is guaranteed by a third party, thought to be the Taiwanese businessman Pierre Chen. Following a two-person bidding war, it sells for $400m ($450.3m with fees) to a phone bidder on behalf of the new Saudi crown prince Mohammed bin Salman (MBS); his identity is unknown to the public at the time.

17 November—A Christie’s press releases states that the Abu Dhabi Ministry of Culture will own and exhibit the painting at the Louvre Abu Dhabi. Unconfirmed reports begin to circulate that a Saudi royal was the buyer.

7 December—MBS is identified by the Washington Post as the buyer of the painting.

8 December- Louvre Abu Dhabi issues a statement to confirm that it has “acquired” the work.

January—Louvre Abu Dhabi denies the Royal Academy of Arts’s request to loan the work for its Charles I exhibition.

April—A French/Saudi summit in Paris sees Emanuelle Macron and MBS sign the Al-Ula agreement—a ten-year deal, potentially worth tens of billions of euros, that gives France an exclusive role in the project to develop the Al-Ula province as a major cultural centre, heritage site and tourist destination. It is later claimed in a 2021 documentary film that agreements for the Louvre to show the painting in its upcoming Leonardo show were made during this summit.

June—Louvre officials begin a scientific analysis of the painting by its C2RMF lab, authorised by Saudi Arabia’s Ministry of Culture.

27 June—Officials at Louvre Abu Dhabi announce that the work will go on show on 18 September at the new museum.

August—Pierluigi Panza publishes L’ultimo Leonardo, assessing what was known about the Salvator Mundi at that point, mainly through an assessment of newspaper articles (though it has no endnotes).

6 August and 3 September—Matthew Landrus challenges its attribution in the Guardian and The Art Newspaper.

3 September—The Department of Culture and Tourism, Abu Dhabi announces that the work will not go on show as planned at Louvre Abu Dhabi. It declines to comment as to why.

18 January—Louvre, in Paris, expresses its wish to loan the work for its blockbuster Leonardo show, opening in October that year, to mark the 500th anniversary of the artist’s death.

April—In his new book The Last Leonardo, the author and art critic Ben Lewis questions the attributional process of the painting and says some specialists believe it to be partly painted by the master’s assistants. He deconstructs the National Gallery’s full attribution in its 2011-2012 show, which Christie’s subsequently used to justify its $100m estimate. The National Gallery defends its role, saying the labelling provided “an important opportunity to test a new attribution by direct comparison with works universally accepted as Leonardo’s,” a museum spokesperson says.

May—The American art historian Carmen Bambach describes it as a work by Boltraffio painted under the close supervision of Leonardo around 1505-10.

October—It is not included in the Louvre exhibition on the press preview days, or at the exhibition’s inauguration.

A photograph sent to The Art Newspaper of the original Louvre ground plan for the exhibition graphically illustrates that the painting was intended to be part of the show. The plan is removed from the Louvre’s exhibition hall at the last minute on the day of the advance press preview.

December—Louvre inadvertently sells a 46-page publication on the Salvator Mundi, which it printed and then withdrew days before the show’s opening of its Leonardo exhibition. The book, co-authored by a Louvre curator and likely published to facilitate a loan for the Leonardo blockbuster, contains a brief portion of the 2018 C2RMF scientific analysis of the painting, focusing on providing evidence of Leonardo’s authorship. Vincent Delieuvin’s chapter on the Cook, Ganay and Naples Salvator Mundi in the Louvre’s Leonardo exhibition catalogue does not, however, attribute any of them solely to Leonardo.

A review of over 250 Leonardo-related volumes published in the 500th anniversary year of his death (in 1519) includes several important monographs that have substantial assessments of the Saudi Salvator Mundi by Leonardo scholars: Martin Kemp, Frank Zöllner, Pietro C. Marani, Carmen Bambach, and Alessandro Vezzosi.

January—A row erupts over whether the work was indeed offered for sale before it went on show at the London National Gallery exhibition in 2011 (it is generally frowned upon for public collections to show works that are available for sale).

February—Louvre exhibition closes with no appearance of the painting.

January—A number of revelations on the picture emerge from two separate studies: the Louvre’s 2018 examination of the picture for its blockbuster show, and an independent analysis by a computer programmer and art historian. Both studies suggest that the figure’s blessing arm and hand were not part of the artist’s original concept. The latter computer-generated analysis goes further and also classifies the blessing arm and hand as strongly “not Leonardo”.

13 April—A French feature-length documentary on the work, The Saviour for Sale, is released. Among its bold claims is that the Louvre did not accept the painting as by Leonardo alone, only that he “contributed to it”. These claims are made by two anonymous men who describe themselves as “French government officials”. They claim that these findings were presented in September 2018 to the Louvre’s then-director Jean-Luc Martinez. They continue that President Macron, upon learning this, refused to accept MBS’s condition that the Salvator Mundi be shown next to Mona Lisa and attributed as a “100% Leonardo”, explaining why it was not shown at the Louvre.

20 April—These claims are contradicted by leaked pages from the suppressed 2019 booklet published and withdrawn by the Louvre ahead its Leonardo blockbuster. As Martinez wrote in its preface: “The results of the historical and scientific study … allow us to confirm the attribution of the work to Leonardo da Vinci.”

November—The Prado museum in Madrid downgrades Leonardo’s $450m Salvator Mundi in the catalogue for its exhibition Leonardo and the copy of the Mona Lisa. This decision represents the most critical response from a leading museum since the Christie’s sale.