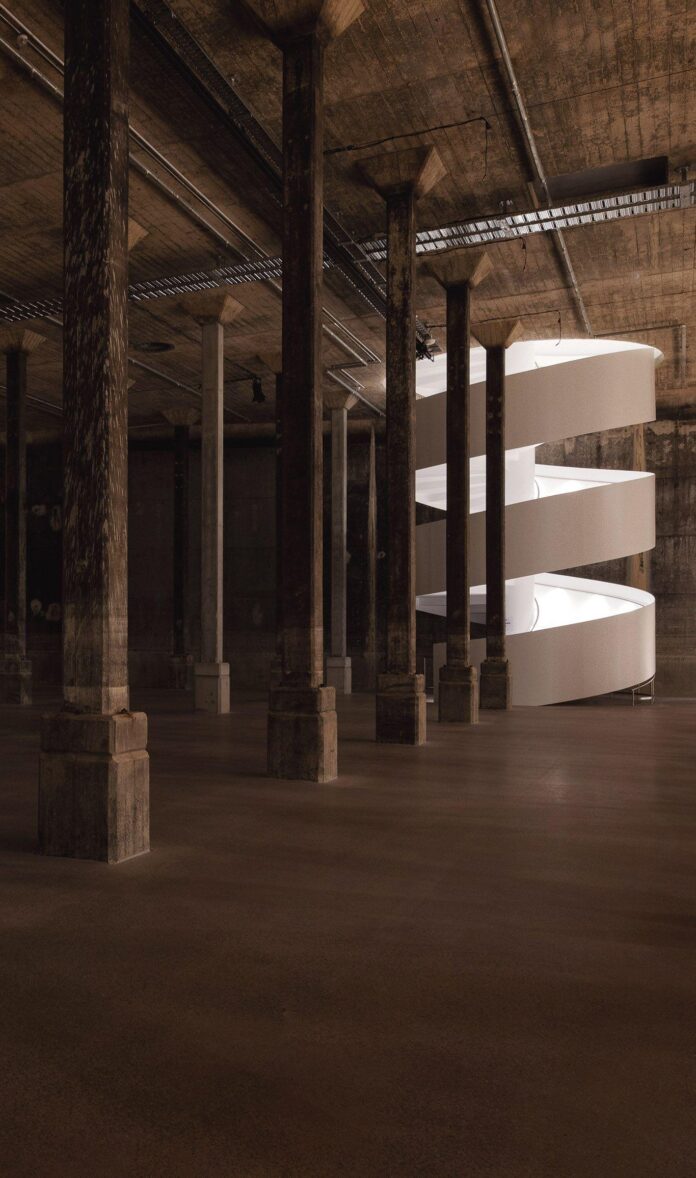 In Sydney, a city of icons so photogenic even an average photographer can snap a decent image, the Art Gallery of New South Wales’s new space, the Tank, is an icon of a different kind, as difficult to capture in a photograph as it is to quantify. When empty, the 2,200 sq. m space is a vast moodily lit forest of 125 concrete columns. “It’s as far from neutral as any contemporary art display space could be,” says Justin Paton, the museum’s head curator of international art. “Everywhere you look, there’s this thumbprint of time and human use and history.”

Built during the Second World War to hold fuel for Australian and Allied ships, the Tank has lain dormant beneath the surface on the edge of Sydney’s Domain parkland since it was drained and shuttered in the 1980s. “It’s been sitting there under our feet, latent, almost waiting to be activated for so long,” says Paton.

In 2014, when the gallery approached a selection of leading architects to submit proposals for the Sydney Modern Project, the site included the former oil reservoir. While most architects proposed demolishing the wartime relic, the Tokyo-based architectural firm SANAA, not known for incorporating existing buildings into their designs, offered up something different.

“Part of the genius of their plan was to recognise that it was very much, as [SANAA co-founder Ryue Nishizawa] said ‘the treasure’ that needed to be preserved in all its reverberant uniqueness as much as possible,” says Paton.

The firm’s intervention in the Tank is minimal: a white corkscrew spiral staircase at one end, a handful of new pillars, a new floor, conduits for cables, power and lighting. They “just let the space do what it can, let it be shadowy, let its textures manifest”, says Paton.

For the inaugural commission, Paton turned to 42-year-old Adrián Villar Rojas, an artist known for his capacity to transform every inch of a space, while recognising the significance of the container of art as much as its content. Paton credits the Argentine-Peruvian artist with “the most stirring experiences of contemporary art” he has come across, including The Theater of Disappearance (2017), an expansive installation spread across four stories of the Kunsthaus Bregenz in Austria. Villar Rojas altered the floors, walls and ceilings: each room was more akin to a movie set than a gallery space. “Each floor felt like you were travelling through layers of history and human experience,” says Paton.

In 2018 Villar Rojas arrived in Sydney for his first site visit. Seven metres below ground level, the artist and curator sloshed about in gumboots, their torches casting seemingly endless shadows from the slender pillars propping up the roof. “It was a magical moment,” recalls Paton. Villar Rojas immersed himself in the location’s history, and in conversations with the gallery’s archivists, curators and Indigenous team, all part of a process he calls “bodily immersion”, which often involves spending months in one place in order to realise work that responds to its local context.

But on 19 March 2020 Australia closed its border to non-citizens in response to the global pandemic. It would remain closed for almost two years. For an artist known for his highly site-specific installations, one might assume the country’s pandemic response would derail the project. But the ever-resourceful Villar Rojas simply improvised.

“It’s a deeply site-specific project,” says Paton, “a project that would not have happened without this space as a trigger and a generator of ideas.” Unable to travel, Villar Rojas conceived The End of Imagination in three different locations: on site in Sydney, in his workshop in Rosario, Argentina, and in the virtual realm, inside a bespoke piece of software his team developed called the Time Engine.

Inside the Time Engine, Villar Rojas can generate virtual worlds with varying environmental conditions and timescales, from a few years to millions of years. Into these virtual worlds he then places objects to test how they would respond. “Rather than modelling sculptures, he has been modelling worlds that themselves then model the sculptures,” says Paton. “It’s really a device for asking questions.”

The Time Engine provides answers to wildly speculative questions, such as: what would a sculpture by Michelangelo look like if you left it in the Jurassic period for 500 years? What would a car look like if you left it in a valley on the surface of Mars? The objects it produces “almost defy description—every sculpture is like 1,000 sculptures”. Since early 2021, the artist and his team have engaged in “the most visceral and sustained campaign of material experimentation” in order to retrieve these time-travelling objects from the virtual realm and manifest what Villar Rojas refers to as “impossible objects”.

With crates containing Villar Rojas’s “impossible objects” being unpacked as we speak, Paton believes the encounter that awaits visitors is “like nothing [they have] experienced in the gallery before”.

“Adrian is an artist who brings everything, brings body and soul, and produces encounters that I can’t really think of a parallel for. I think this is going to be a show that people don’t necessarily have words for but they emerge and feel that they must visit again.”

Exhibitions on view at the gallery in the coming year

Dreamhome: Stories of Art and Shelter
3 December-17 September 2023
Twenty-nine artists from around the world reflect on their dreams of home, including Igshaan Adams from Cape Town, Samara Golden from Los Angeles and John Prince Siddon from Western Australia.

Sol LeWitt: Affinities and Resonances
Until 12 February 2023
A wall painting by Sol LeWitt is brought together with paintings by two Aboriginal artists he described having a “great affinity” for: Emily Kame Kngwarreye and Gloria Tamerre Petyarre.

Archibald, Wynne and Sulman Prizes 2023
6 May-3 September 2023
A trio of prestigious art prizes in one exhibition. The Archibald is given for portrait painting; the Wynne is for landscapes, while the Sulman is for the best genre painting, subject painting or mural project.

• Read all of our articles on the Sydney Modern Project here