Home News This is Australia: Six must-see artworks in the Art Gallery of New... 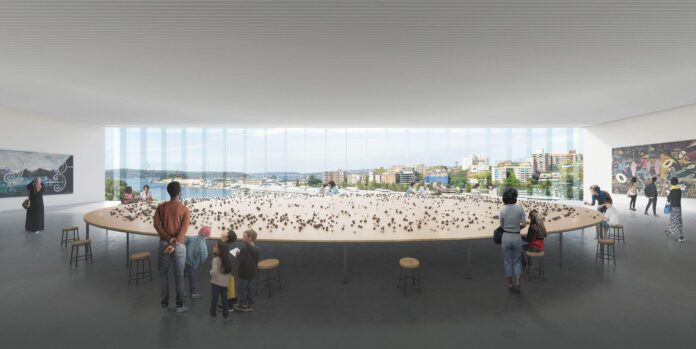 The Art Gallery of New South Wales has a collection of nearly 36,000 artworks from across time and from around the world, as well as an unrivalled collection of Aboriginal and Torres Strait Islander art. The Sydney-based museum’s deputy director and director of collections Maud Page picks out some highlights.

This is a huge piece: it’s 19 metres by 11 metres. What we love about it is that it is a work that is created by our visitors. So essentially you grab a piece of clay and you form a sphere in your hand and you leave the sculpture there. As you can imagine, after thousands of visitors, all of those little balls stack up together and they create this beautiful installation piece.

This is one of the first pieces that we brought in for the new building. It is an entire room that’s given over just to her installation—there’s nothing around it but a view out on to the harbour, across the top of one of our roofs that has been landscaped. It embraces the city in a completely different way to our original building. As soon as anyone sees a picture of these galleries they will know: “Oh yes, that’s definitely Sydney.”

Indigenous works are really important to the museum because you can’t see this kind of work everywhere. This piece is made on bark, and to get these kinds of forms on bark with such elegance, but also such spirit and movement in them, is incredible.

Australians are starting to look at our landscape differently. We’re starting to be able to read our landscape in a new way because of these artworks and the explanations that have been gifted to us. We call it “Country with a capital C”. Rather than “landscape”, which suggests that it is ornate, that it has been tailored to suit Western life, it is about Country that is alive and constantly being engaged with. This piece comes from the top end of Arnhem Land, which is in northern Australia. It shows the lightning that happens there at certain times of the year, and the spray and the commotion that occurs as it strikes the water and the rocks.

A lot of Indigenous artists paint what has been handed down by their families and they don’t deviate from that. Marawili has been given permission to be able to be much more imaginative with her depictions, and that’s why you get these incredible forms, which are not abstract or expressionist, they are unique.

What distinguishes us from other Sydney museums is that we have an historical collection as well as a contemporary one. We’ve got a strong collection of Dutch, French and Italian works. So we have very well-known artists like Rubens, Boucher, Watteau, Bronzino and Tiepolo. We also have Rodin, Manet, Cézanne, Bonnard and Picasso. Paintings like this were bought from Europe to inspire Australian artists and to also give the public a sense of the history of European politics and art.

This work also shows the strength of portraiture in our collection. Every year, we hold the Archibald Prize for portraiture, which is over a hundred years old. It allows the public to come into our gallery and really have an opinion about the artists, about the people depicted, and it creates an incredible amount of dialogue. We collect from that prize as well, so portraiture is shown throughout our collections across all departments.

This work is from the southern desert region. Ken is depicting Country, and when you speak about Country, it includes everything, even the stars. In this particular work, seven sisters travel the night sky, attempting to flee unwanted attention from an older man; the sisters are actually the Pleiades and they’re being chased by Orion. It is another way of understanding our world when we step outside our homes and look up. And that is the strength of Indigenous art. But also you have that incredible use of colour; the composition is absolutely perfect; the line work is exquisite. It could be anything, but we are also told what the stories are.

This is a work that is really dear to Australians. Ken Unsworth is a Sydney artist, born in 1931, and he was quite a major player in the 1970s, part of that movement we saw across the world in which performance and the body became so important to artists. The suspension of those stones is really quite amazing. There are 103 river stones weighing 16 kilos each and they are suspended so perfectly that they are all equidistant from each other. You really feel that they are suspended by some kind of force, but you can also see all of the threads that equally form the artwork. The artist says it is a chorus of stones, singing their own songs.

With so much turmoil in the world, we turn to artists to provide unflinching commentary on climate change, gender, colonial histories and the key political events that affect us all. Hoda Afshar’s moving image work was made with a group of stateless men who remained on Manus Island, Papua New Guinea, after Australia’s immigration detention centre closed in 2017. In the film, they speak of their experiences, evoking violence, but also singing and reading poetry. Their words are overlaid with images of lush foliage and crystal-clear water.

In Australia some of these men like Behrouz Boochani (shown here being carried) are now public figures. Remain is shown in our original building while large photographs of the men are shown in the new building, strengthening the narratives across our campus. Afshar is an artist whose work can reorient our thinking on urgent issues and we need to be listening!

• Read all of our articles on the Sydney Modern Project here