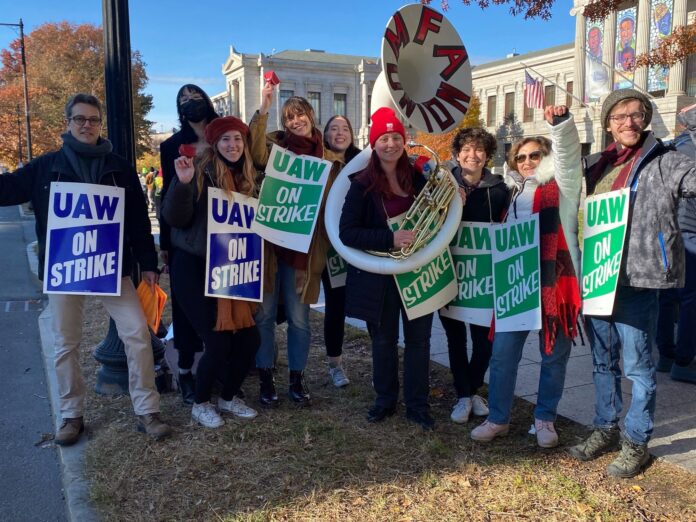 On 28 June, unionised employees at the Museum of Fine Arts (MFA), Boston ratified their first union contract with the museum, with an overwhelming majority of 87% voting in favour. The ratified contract comes after 18 months of negotiations, during this time, the union held a one-day strike and even required an intervention from Boston Mayor Michele Wu.

“I am very excited to have a ratified contract with the MFA. We spent 18 long, tough months in negotiations. I haven’t even processed how wonderful it is to have a contract yet,” says Jordan Barnes, a member of the bargaining committee and a library associate at the museum. “We voted to ratify it by 87%, so I know it is very clear that the membership is behind this contract and supportive of it. Also knowing that it’s the first contract, there’s more to come down the road. We are very excited to be moving forward as the union at the MFA and have such a great contract.”

One of the major gains in the contract is a raise for wages and minimum pay rates. On 1 July 2022, workers will receive at least a 5% increase, though some workers may see a higher rate. Starting on 1 July 2023, wages will increase by 3% and again on July 1 2024. According to the MFA, this will work out to be a 13.5% increase in wages over the course of the contract’s three-year term, while some employees will see their salaries increase 15% over the same period.

In November of 2021, workers held a one-day strike to bring attention to negotiations, which were at a standstill over wages. The ratified contract includes several non-economic elements including a just cause protection, a grievance process that is legally binding, as well as contract coverage for temporary employees after being employed at the museum for an allotted amount of time. The new contract also includes commitments to form a workplace diversity training programme and a labour management committee.

Unionising efforts at the MFA began in 2019 and the following year, after a 133 to 14 vote, the union officially formed. It consists of more than 200 workers including front-facing staff, part-time educators and employees across multiple departments including  administrative, technical, curatorial and conservation. The MFA union is part of the New York-based United Auto Workers (UAW) Local 2110, which represents workers at many cultural and educational institutions across the Northeast Including the Museum of Modern Art in New York and the Portland Museum of Art in Maine.

“We are pleased to have reached an agreement on a union contract with the MFA that will provide a more equitable compensation structure and a democratic voice for the staff,” says Maida Rosenstein, President of Local 2110 UAW. “By establishing collective bargaining rights, the MFA staff is helping to bring about necessary systemic change for museum workers in general. We are pleased to have reached this agreement with the MFA, and look forward to a good working relationship with museum leadership based on mutual respect and dedication to the MFA.”