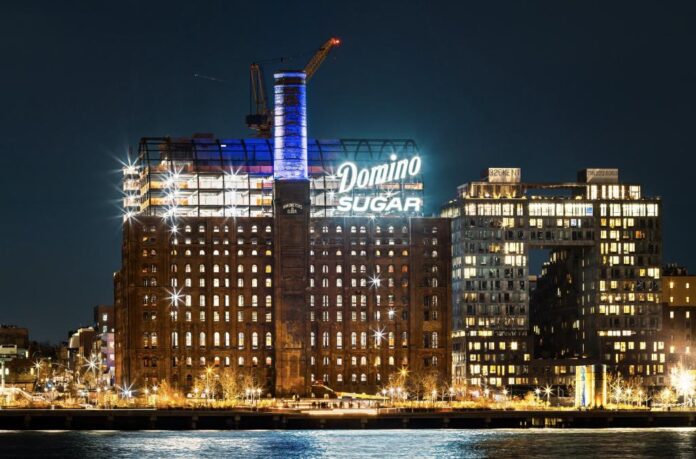 A beloved monument returned to the Brooklyn skyline without pomp or circumstance last night when the Domino Sugar sign was quietly relit atop the Thomas Havemeyer building’s new barrel vaulted glass roof, illuminating the Williamsburg waterfront for the first time in eight years. It also marked one last milestone in 2022 for redevelopment at the former refinery, which was last open to the public in 2014 for Kara Walker’s A Subtlety, a 35-foot-tall Sphinx-like sugar sculpture, in the space’s Syrup Shed.

The “Sugar” part of the new sign has been done since November, but the more intricate “Domino” portion was just completed. Towering a combined 30 feet, the new sign matches the original’s exact dimensions, trading neon for eco-friendly LED lights with increased wattage. “The aluminum is also significantly lighter,” Dave Lombino of Two Trees, the firm behind the redevelopment, told Artnet News.

The Thomas Havemeyer building served as the actual sugar refinery at the plant’s full 11-acre campus from its construction in 1882 until 2003, just before operations moved to Yonkers. For generations of employees and residents, the sign signaled Williamsburg was nigh with brilliant yellow lights and that unmistakable typeface. 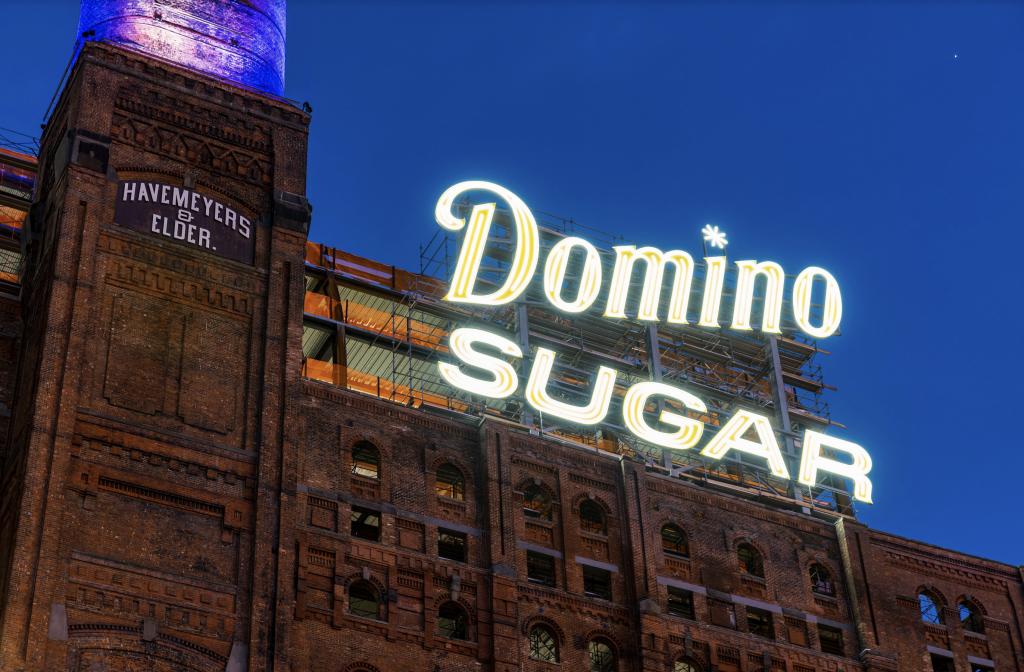 Brooklyn’s defunct Domino plant was once America’s largest. Another factory remains up and running in Baltimore; their updated sign just unveiled last spring. One local “type-setting geek” told Baltimore Magazine that every letter in the old sign from 1951 was “a work of art, keeping in mind there was no technology for reproducing an image to scale in those days.”

Ancillary buildings around the Brooklyn site were destroyed after 2003 to prepare for eventual redevelopment. According to Untapped Cities, officials overseeing the proposed plans in 2009 requested a spot for the iconic sign, which had been moved to the roof of another remaining building. The sign didn’t enjoy the same landmark protections the refinery itself had.

Inside, the revitalized plant, rebranded “the Refinery,” will feature an ultramodern design concept by the Practice for Architecture and Urbanism which some have compared to “a ship in a bottle.” The glass walls surrounding all 460,000 rentable square feet of office space will be set 15 feet back from the original exterior—with vines and 30-foot-tall sweetgum trees in between. The space will be all-electric, net-zero carbon, and open next year.