Home News Looted Maya frieze once offered to the Metropolitan Museum will be fully... 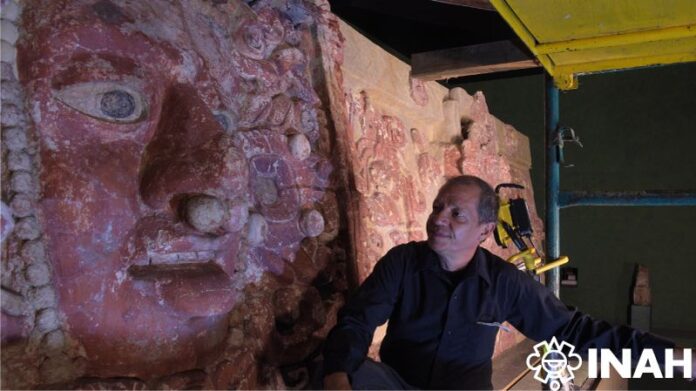 The Mexican cultural federal bureau Instituto Nacional de Antropología e Historia (INAH) is working to restore an ancient Maya temple façade that was looted from the jungle in the 1960s and once offered to the Metropolitan Museum of Art. The project is being carried out in public view at the Museo Nacional de Antropología (MNA) in Mexico City—where it is expected to be unveiled in its full splendour by December 2023.

Conservators began working on the restoration of the colossal 9-metre-long stucco relief (dated to around 450-600 CE) in 2018, working to recombine the fragmented work and remove a polymer that had been applied by traffickers to prevent it from disintegrating.

Sergio González García, the head coordinator of the restoration project, says that the nearly two-ton work had to be stabilised with a metallic framework and that the project team hopes to restore the frieze as close to its original polychrome as possible. “The pigments used in the polychromy of the relief are iron oxides in different degrees of oxidation for the colour red, carbon black for the pupils of the characters and lime white for nails and other details in the eyes,” he says.

Archaeologists believe the work, which depicts either the maize god or an unknown governor wearing a feathered headdress and flanked by two elder gods holding symbolic glyphs, was extracted from a site called Placeres (Pleasures) in the jungle regions of Campeche around 1968, and that it had been intentionally buried by the Maya.

The Late Classic archaeological site was first identified in the 1940s by the American archaeologist Sylvanus Morley—a leading Mesoamerican archaeologist and US government spy who led significant field work in Mexico and Central America from the 1920s and late 1940s, including some of the first excavations of Chichén Itzá.

According to historical records, traffickers provided photographs of the façade in-situ to the antiquities dealer Everett Rassiga, who then offered the work to Josué Sáenz, a Mexico-based collector who was later linked to another high-profile art trafficking case involving the astronomical Maya calendar known as the Grolier Codex.

Although Sáenz declined the offer, Rassiga believed he could find an American buyer for the piece, and ordered that the relief be cut into fragments and shipped to New York, where it was offered as 48 fragments to the Metropolitan Museum. The Met’s then-director Thomas Hoving allegedly refused the work, which Rassiga had priced at $400,000, and alerted Mexican authorities. The work was transferred to the MNA in 1969.

See Inside the Light-Filled Studio of Glenn Brown, Where Old Master Woodcuts and Frames Serve as Sources of Inspiration

Supermodel Heidi Klum Has Always Been an Artist. Now, She Tells Us Why She’s Making Paintings of Bored Ape Yacht Club NFTs