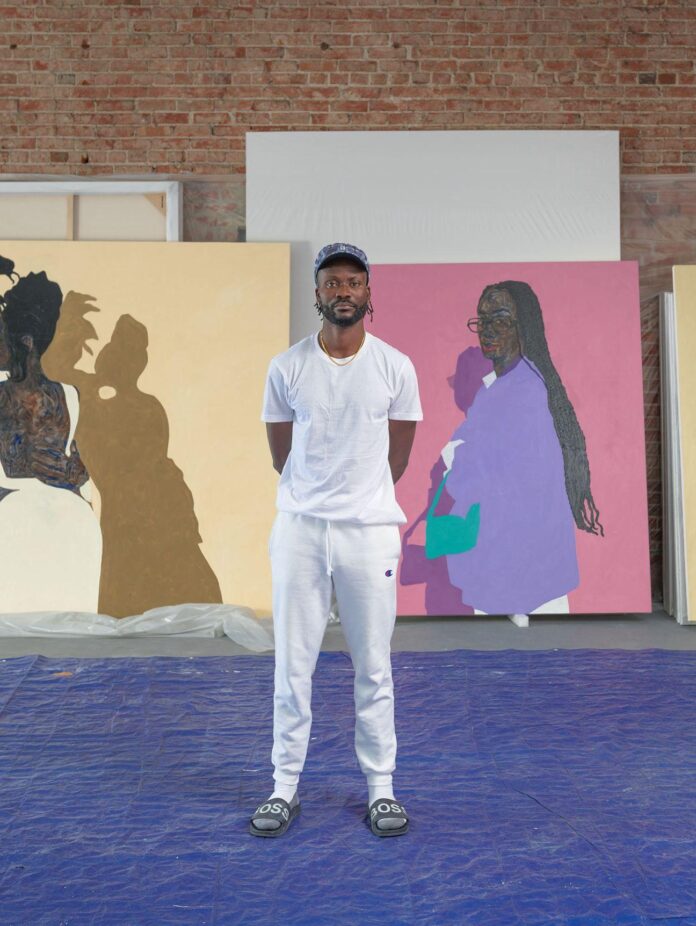 The market darling Amoako Boafo, one of the most successful artists from the Ghanaian capital Accra, is known for his game-changing works and eye-watering auction prices. Indeed, so meteoric was this rise that at one point orders from the studio priced at around $50,000 were eclipsed by a $880,971 sale made at Phillips in February 2020, some 13 times the estimate. But stories about Boafo often dwell on this rise and focus mainly on the start of his career. Less is written about what he is doing now—opening an artists’ residency and open resource for artists in Accra, a city that is fast becoming an art world hot spot.

Boafo’s joyous portraits of solely Black people strike a chord, not only with savvy market operators but also with cultural commentators across the creative industries. Notably, he has been unwilling to fully commit to a large gallery. “I take time making important decisions such as which gallery to work with, but once that decision is made, that is it,” the artist tells The Art Newspaper. “I have been continuously and fully committed to my galleries; I am very adamant about loyalty.”

Boafo, aged 36, is now at a stage in his career where his work is being acquired and exhibited by major international museums and galleries. After debuting a work at Art Basel in Miami Beach earlier this month with Gagosian, which sold to an unnamed US institution for an undisclosed sum, he will now stage a solo show in New York with the mega-gallery in March 2023.

“He’s very smart, very savvy, with a certain international understanding of the art world,” says Andrew Fabricant, the chief operating officer at Gagosian. “I think our show is a little late and coming but I think the timing is really good for the show and for him.” He adds that there is already strong demand for the works due to go on view next spring.

While Boafo has a reputation for being reticent about discussing his market, he thinks of commercial galleries as guardians of creativity. As he puts it: “A large part for me was knowing the kind of speculation my career has gone through and understanding if I want to protect artists or shine light on the best and worst of the art world, that I would need to do that with a hands-on approach.”

He adds: “When I was at the beginning of my career, having an entity like dot.ateliers in my hometown would have changed my experience whole heartedly.”

Boafo’s project was born out of his own studios, which he has opened up to fellow artists. He voiced his support for his fellow Ghanatta College of Art and Design alumni, Quaicoe, who is signed to Almine Rech, and Botchway, who is represented by Maruani Mercier. He has offered studio space, guidance and support to a group of local artists including the painter Eric Adjei Tawiah and the sculptor and studio manager, Allotey. Dot joins other artist founded initiatives in Ghana including Ibrahim Mahama’s Red Clay in the Northern city of Tamale and Kwame Akoto-Bamfo’s Nkyinkyim Museum in Ada Foah.

“The initiatives by artists in Ghana are incredible but there is sadly the lack of support from the government and elsewhere due to different priorities, maybe? It is now up to us individuals in the art industry to contribute to filling that void of support,” Boafo says. “Growing up I longed for a space where I could express myself creatively within my community and the much-needed support to do so and access to interdisciplinary dialogues and educational materials to help me on my chosen path. I gained exposure and experienced the possibilities later; and the moment I could afford to, I started to create the space within my community for others that I wished I had.”

Mariam Ibrahim, the founder and director of her eponymous gallery, has had a long-term professional relationship with Boafo, presenting his work at fairs and staging exhibitions of his work. She also sits on the board of dot.ateliers alongside the art patron Nish McCree, the architect Glenn DeRoché, the critic Larry Ossei-Mensah and the painter Derek Fordjour.

“Nothing of its kind exists in Accra, which is exciting for the country and why I was interested in being on the board. It’s empowering for the local artists and creatives to see someone locally supporting them, who has international recognition,” Ibrahim says.

2023 looks like a year in which Boafo could fulfil his hopes of supporting other artists and start to exhibit more widely, building a strong foundation for his young career. Is this a tricky balance? He doesn’t think so.
“I don’t balance it; I don’t think it’s necessary. Accra is my home but also my experience in the international art world is something I do not take for granted. If anything, I continue to share and bring those experiences back home to Accra.”

‘I’d Like You All to Meet My Aerobe Friend’: Watch Artist Anicka Yi Give Her First TED Talk—With a Giant Robotic Organism