Home News Climate Activist Gets Jail Time for Gluing Himself to a Van Gogh... 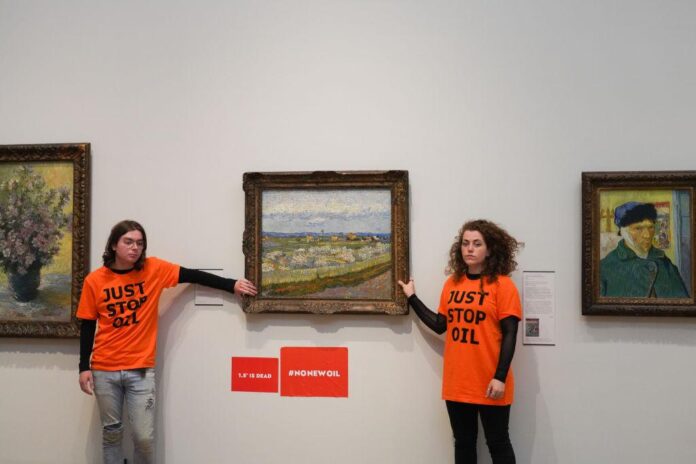 Two protestors from the environmental activist group Just Stop Oil were sentenced yesterday in a U.K. court for causing £2,000 worth of damage to the frame of a painting by Vincent Van Gogh at the Courtauld Gallery in London.

Louis McKechnie, 22, and Emily Brocklebank, 23, glued themselves to the frame of Peach Trees in Blossom (1889) on June 30. Unlike its 18th-century frame, the 19th-century painting itself was unharmed.

McKechnie, from Dorset, was sentenced to three weeks in jail. He has previously served time for participating in road blockades and for trespassing at a Premier League football match, where he tied himself to a goalpost.

Speaking at Westminster Magistrates’ Court, he invoked historical examples of activism as justification for the protest, according to the BBC. “In 1960, Martin Luther King was the most hated man in America. The Civil Rights movement still worked,” he said.

Brocklebank, from Yorkshire, instead got off with a suspended sentence but must observe a six-week, electronically-monitored curfew. “I didn’t think I would cause much damage,” she told the court. “Glue comes off.”

“Any good human would agree with trying to sustain life on Earth,” she added in defense of her action.

The defendants’ solicitor Francesca Cociani attempted to argue that the value of the painting might increase as a result of the protest.

“Say the [Courtauld] Institute was to sell it on in 20 or 30 years, is it possible its value would now increase?” she asked one of the gallery’s curators, Karen Serres.

Serres countered that this is “absolutely not” the case, adding that she did not believe the painting could be sold anyway.

When District Judge Neeta Minhas gave her verdict, she highlighted the considerable value of the painting and added that the damage caused to the frame was “not minor, insignificant, temporary or trivial” but permanent. “It is not in a state where it can return to its original state.”

“I find you both guilty of criminal damage, having no lawful excuse to cause damage but you did so on a reckless basis,” she told the defendants.

A third protestor allegedly involved in the incident, Xavier Gonzales-Trimmer, 21, had previously faced charges of distracting the guards but these have been dropped. He was, however, fined for failing to appear in court for an earlier hearing.

The trial suggests the beginning of harsher legal repercussions for the many climate protests that have been staged in museums over the past few months. Another pair of activists were jailed in the Netherlands after targeting Vermeer’s Girl with a Pearl Earring.

Other museums have filed complaints, including the Dresden State Art Collections, which sought to have two protestors fined for gluing their hands to the frame of Raphael’s Sistine Madonna at the city’s Old Masters Picture Gallery. The restoration was estimated to cost up to €5,000 ($5,000 at the time), with an additional loss of income of €7,000 ($7,000) for temporarily closing the museum.

Gareth Johnson MP calls for the prime minister to consider making Just Stop Oil a “proscribed organisation so that they can be treated as the criminal organisation they actually are”https://t.co/WUnquWvHqf

Today, Conservative MP Gareth Johnson suggested in the U.K.’s House of Commons that Just Stop Oil—the group behind the attack at the Courtauld Gallery and another incident where tomato soup was thrown at Van Gogh’s Sunflowers at the National Gallery in London—should be labeled a “proscribed organization so that they can be treated as the criminal organization they actually are.”

British Prime Minister Rishi Sunak followed up by stating: “The police have our full support in their effort to minimize this disruption and tackle reckless and illegal activity. The public order bill will give them the powers they need and I look forward to seeing the support that that bill receives from every part of this house.”

This bill would, among other things, introduce a new “locking-on” offense that “criminalizes the protest tactic of attaching themselves to others, objects or buildings to cause serious disruption”, according to a publication issued by the U.K. government. Offenders could receive a fine, up to six months in prison, or both.