Home News An Update on Christophe de Menil, the DJ Who Is a Thorn... 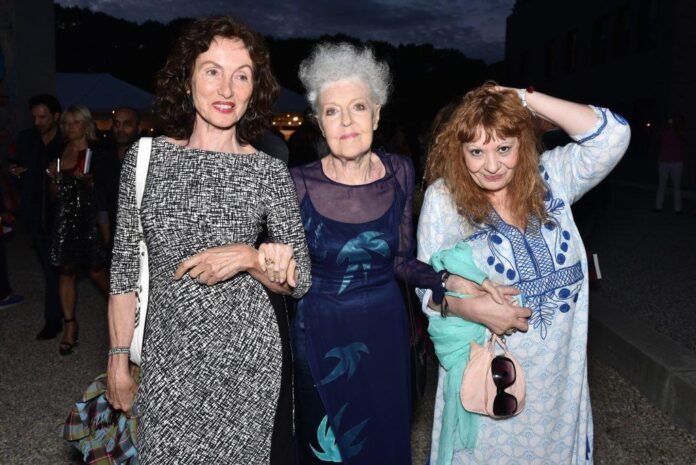 This week, between auction previews uptown, I had a couple of hours to kill on the Upper East Side. I walked past a bodega where I spotted the new issue of New York Magazine with a cover story on Britney Spears’s notoriously abusive conservatorship, which was nullified in court just about a year ago. I recalled that a similar story was ongoing about an art world luminary around the same time Britney was freed, but with no resolution. Remember Christophe de Menil?

Allow me to remind you if not: Christophe is one of a small handful of mega-collectors who set the prototype for the glamorous, well-heeled art patron, known for throwing fabulous parties for the tony cultural class from her Upper East Side townhouse. She is the second generation of esteemed art-world pedigree: the first generation are Dominique and John de Menil, who founded the Menil Collection in Houston. Christophe married famed Buddhist Robert Thurman, and their child Taya (who, yes, is half-sister to Uma Thurman) is mother to the late artist-provocateur Dash Snow.

Last November, Christophe’s longtime friend Alina Morini filed a complaint in New York alleging that Taya was keeping Christophe locked away in her townhouse in a bid to take control of her finances. (Sounds familiar to the allegations originally made against Britney’s father, Jamie Spears, doesn’t it?) But, before leaping to any conclusions, a few other important facts to note: Morini had been living in the townhouse with Christophe for six years, and during that time, was once arrested for trespassing into the building.

While skimming New York’s piece on the dissolution of the Spears conservatorship, : how is old Christophe doing these days? So I made my way uptown to do a little drive-by of the legendary townhouse to see if anyone was home.

After lurking outside the townhouse for a few minutes, watching lights flicker through French windows, I started to feel a little creepy. Once I accepted that I was being creepy no matter what, I thought , and went up to the doorbell marked “DE MENIL”. After a few buzzes, a scratchy voice eked out a static-drenched, “Hello?”

And then, the vexing answer: “Nobody’s home.”

Not so easily deterred, I slumped off home and started firing off some emails. Eventually, a motion from the Supreme Court in the state of New York landed in my inbox, which revealed that the court had dismissed the complaint from last fall. The document detailed a sort of cat-and-mouse game between Morini, who kept trying and failing to serve Thurman the complaint, and eventually asking the courts for a default judgment (which would decide the case whether Thurman was present or not).

The document asserts that “contrary to plaintiff’s contention, Thurman has never been properly served in this action.” Tl;dr, the case has been dropped, and while somebody is certainly in that townhouse, no court in New York is stating that it is due to foul play. Morini’s lawyer did not immediately respond to a request for comment, nor did Taya Thurman.

According to sources close to the family, Christophe is in good spirits these days. “I wasn’t aware of the development of court proceedings but I did get word from Caroline [Snow, Christophe’s granddaughter] that Christophe is doing better and is in good health. That’s the most important,” Nico Iliev, a close friend of the family who was part of the original testimony indicting Taya, told Wet Paint. According to Iliev, Morini has since been forcibly removed from the townhouse. “It saddens me deeply because those two ladies were a healthy dynamic duo and they were severed externally. That’s my take.”

DIPLO’S BUYING HABITS NEED SOMEONE TO LEAN ON 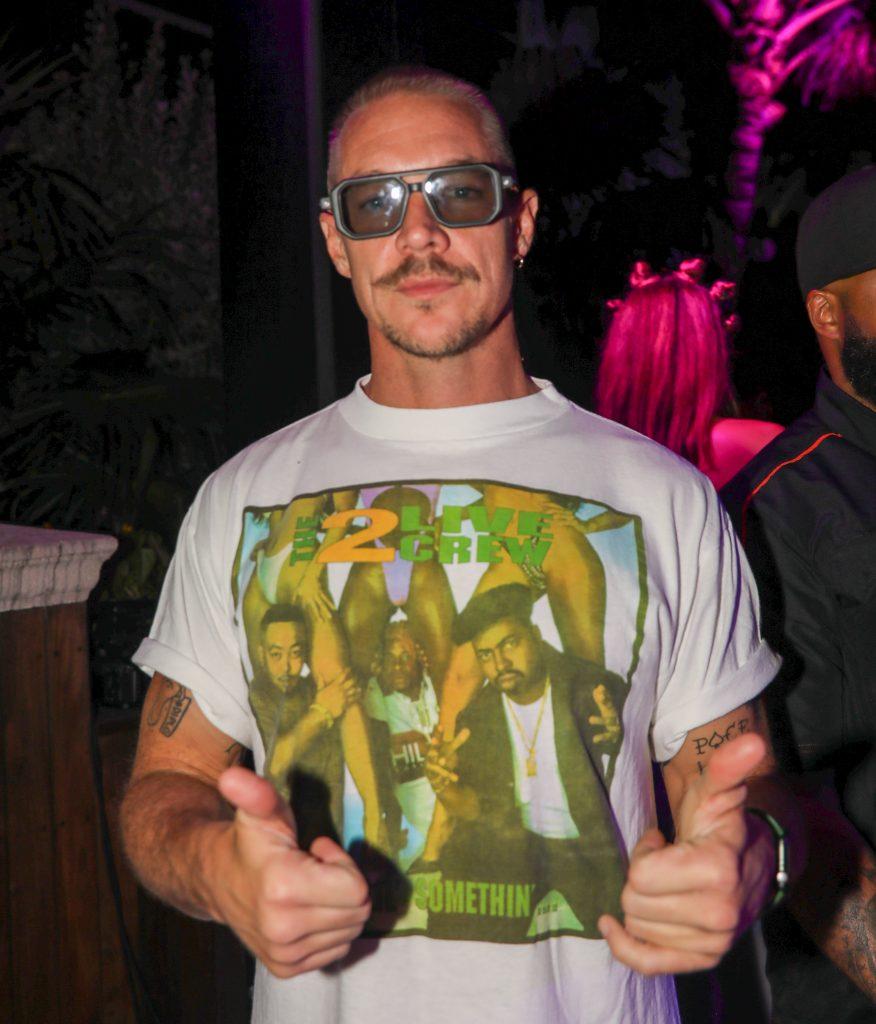 This guy comes up to your booth at Art Basel Miami Beach and asks for a price list, WYD? (Photo by Thaddaeus McAdams/Getty Images for Ocean Drive)

With the $1.5 billion sale of Microsoft co-founder Paul Allen‘s collection behind us, and just a few hundos more to be made in New York’s auction week bonanza next week, the art circuit is already starting to look ahead to its next, next, rainmaking opportunity. So at parties these days, it’s with a certain sharpness, a certain intensity, that the question, “So, will I see you in Miami this year?” gets passed around. ‘Tis the season. It’s an easy conversation starter that I’m sure most people who are behind this paywall have been hearing recently.

One of the more interesting nuggets that has come out of indulging this question, however, is the discovery that a certain DJ, (and a certain high school crush of a certain art world gossip columnist), fits a certain profile of a person who attends Art Basel Miami Beach. I have loved spotting Thomas Wesley Pentz (who goes by the stage-name Diplo and may be best known as one third of EDM supergroup Major Lazer) at various art world parties in Miami. Last year I snagged a photo of him at the White Cube party at the Soho Beach House, and also spotted him a few weeks later at the VIP opening at Frieze Los Angeles.

Alas, according to several sources, Diplo is a notorious “tire-kicker,” aka, the type of VIP Day attendee who routinely asks for a price sheet, engages with booth staff about the works for sale, and then never buys anything.

It brings me no joy to report this.

Diplo, if you’re reading this, please don’t stop attending art fairs. But maybe this year it could be worth filling out an invoice or two.

Diplo could not be reached for comment, nor for a request to grab a drink sometime. This article will be updated regularly.

Night Gallery has added Daniel T. Gaitor-Lomack to their roster… Hilde Lynn Helphenstein aka Jerry Gogosian and artist Hiba Shabhaz have created a $17,000 artist grant for a female artist, and the application process is now open…This is the final week that The Jane will be open as the watering hole closest to The Whitney to become a private social club under the helm of Los Angeles nightlife giant Jeff Klein, joining the Chelsea bar graveyard also occupied by The Rusty Knot, which I am still heartbroken about…Christina Vassallo has been named the new director of the Contemporary Arts Center in Cincinnati…Rachel Rossin’s experimental space Dunkunsthalle in FiDi is having its soft opening this evening…

I wonder when the Alex Katz themed lip kit will be released.

Tourmaline, Jonathan Lyndon Chase, and Kimberly Drew at the Leslie-Lohman Museum’s gala honoring Honey Dijon*** Anna Delvey crossing paths with Wet Paint on a morning walk through the East Village***Kylie Jenner paid a visit to the Alex Katz retrospective at the Guggenheim after the CFDA Awards (I wonder if visitation to this exhibit might come to rival Hilma af Klint’s record?)***A new Rita Ackermann mural has been revealed at the Supreme store in Chicago***Dianna Agron and Harold Ancart made their first public outing as a couple, according to People***The dinner for 56 Henry‘s show of Laurie Simmons “Color Pictures/Deep Photos” (which she reimagined this year for the first time since 2009) was with Lisa Yuskavage (whose table stole a tray of shrimp dumplings off of mine), Marilyn Minter, Cynthia Rowley, and Barbara Kruger all convening at House of Joy to fête the artist*** 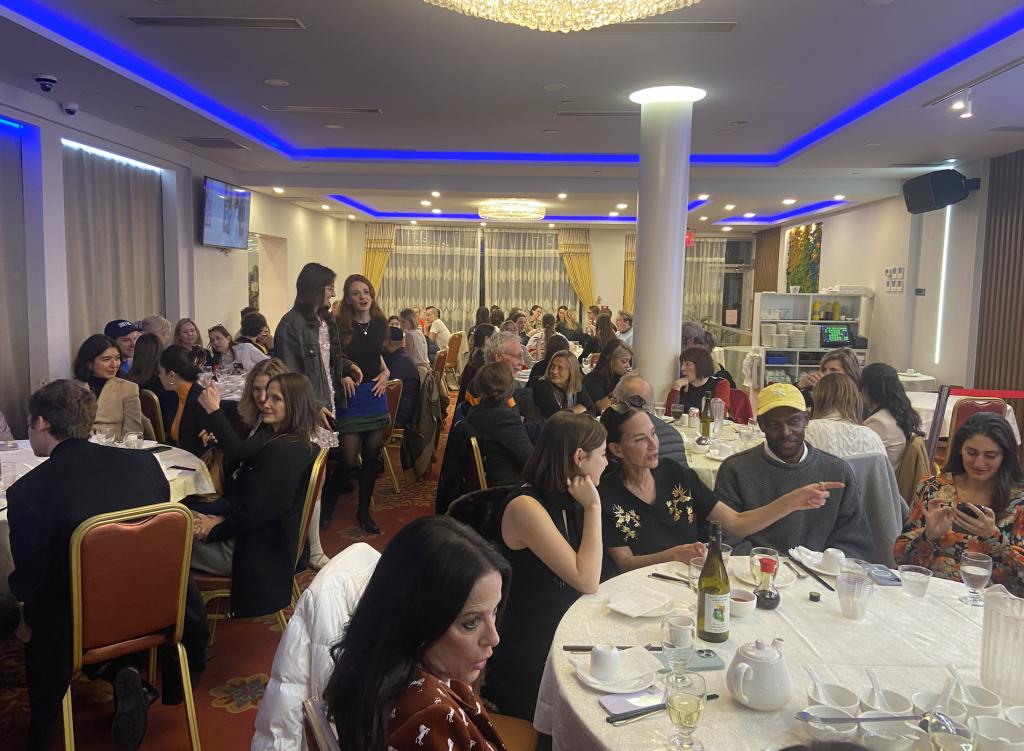 The scene at House of Joy for Laurie Simmons’ opening at 56 Henry.

Last week I asked what you all think about where Marc Spiegler might end up now that the Art Basel torch has been passed to Noah Horowitz. My editor Naomi Rea guessed that he might move to gay Paree to work with Chris Dercon at the Fondation Cartier, though a source close to Art Basel recently forecasted to me that he probably won’t end up in a museum. Everyone else seems to be mum on the topic, but I imagine we’ll be hearing more on that soon enough.

Anyhow, my next question: Which bar in Chelsea serves the worst drinks? Email your response to [email protected]

In Pictures: See the Belle Époque Posters of Jules Chéret, the Most Influential Artist You May Not Have Heard of