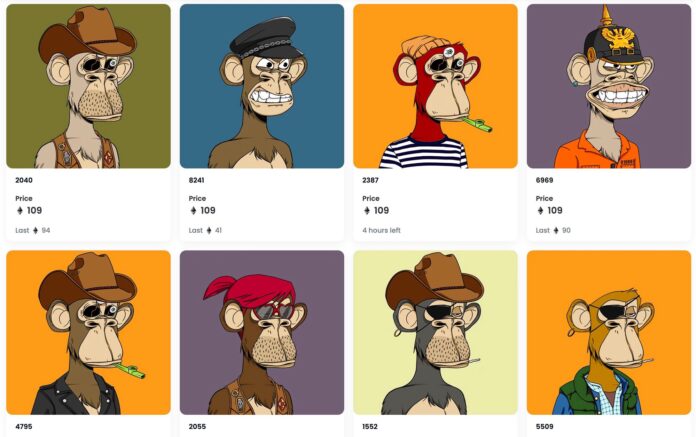 The creators of the Bored Ape Yacht Club NFTs (non-fungible tokens), a high-profile and highly valued limited collection of 10,000 digital artworks, is suing the artist Ryder Ripps, accusing him of “trolling” them and using company trademarks to sell and profit off copycat NFTs. Attorneys for the crypto platform Yuga Labs filed the lawsuit on 24 June in the Central District Court of California. The 44-page document accuses Ripps of false advertising, cybersquatting, trademark infringement and unfair competition, among other complaints, to allegedly devalue the Bored Ape NFTs while making more than $5m “through this scheme of pumping and dumping fake NFTs”.

“This is no mere monkey business,” the lawsuit reads. “It is a deliberate effort to harm Yuga Labs at the expense of consumers by sowing confusion about whether these RR/BAYC NFTs are in some way sponsored, affiliated, or connected to Yuga Labs’ official Bored Ape Yacht Club.” The complaint also names Jeremy Cahen and 10 unidentified individuals as defendants.

In May, Ripps, who is known for controversial projects and stunts that critique various aspects of the internet, began minting his own NFTs based on the Bored Ape images, which have sold for more than $3m. The Los Angeles-based artist peddled the RR/BAYC NFT collection on the marketplaces OpenSea and Foundation, accompanied by the same logos and marks that Yuga Labs uses to brand its NFTs. The platforms have repeatedly delisted RR/BAYC NFTs, but the sales and marketing—what Yuga Labs’ attorneys describe as “lazy infringement”—have led to the company being “irreparably injured and damaged”, the suit claims. It adds that “there is no guarantee that [the defendants] will not try, once again, to create new infringing pages”.

Responding to the accusations, Ripps shared a statement on Twitter this week defending the project as satire. “The lawsuit grossly mischaracterizes the RR/BAYC project—people who reserved an RR/BAYC NFT (Non Fungible Token) understood that their NFT was being minted as a protest against and parody of BAYC,” he wrote, “and no one was under the impression that the RR/BAYC NFTs were substitutes for BAYC NFTs or would grant them access to Yuga’s club. They explicitly acknowledged a disclaimer when they were purchased.”

On the project’s website, rrbayc.com, Ripps notes that the collection is in the spirit of appropriation art and aims to educate people about the Bored Ape Yacht Club. The images are “racist” and “intentionally [embedded with] Nazi dog whistles”, he writes on the website gordongoner.com, named for the pseudonym of one of Yuga Labs’ founders. The website details months of research suggesting that BAYC has links to what Ripps calls “subversive internet nazi troll culture”, such as similarities between BAYC’s black-and-white logo, which features a white ape skull in its centre, and the Nazi Totenkopf emblem.

Yuga Labs’ founders have denied the allegations in their own letter and say that the claims are part of a harassment campaign by Ripps to harm the company. The value of Bored Ape NFTs has fallen since May—the month the artist launched his collection, and amid a crypto crash—dropping from 153.54 Ether (ETH), or about $430,000 at the time, to ETH86.45 on Thursday, or about $88,230.

Several legal experts who spoke with The Washington Post believe that Ripps does not have a strong case. Steve Vondran, a lawyer who specialises in intellectual property and technology cases, says the artist “missed the parody mark in my opinion” and that seeking protection for parody under fair-use laws is more difficult if “it appears they are seeking to financially exploit the creative efforts” of others.

Yuga Labs is requesting a jury trial. “Copying is not satire, it is theft,” the lawsuit states. “And lying to consumers is not conceptual art, it is deception.”