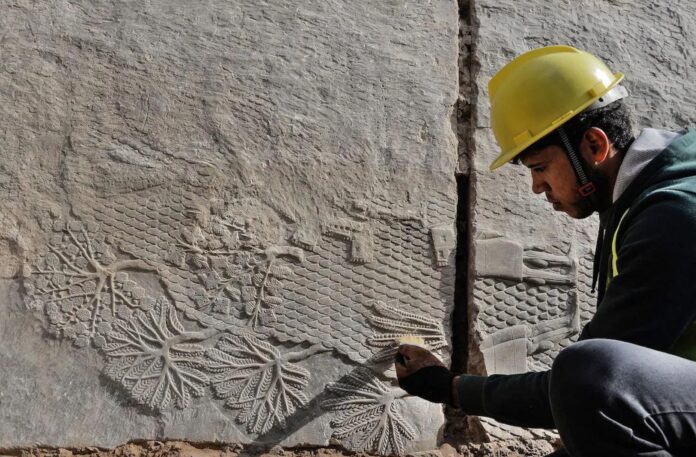 In a surprise silver lining to Islamic State’s (IS) 2016 destruction of the Mashki Gate in Mosul, Iraq—one of the monumental gates to the ancient Assyrian city of Nineveh—archaeologists have discovered a group of stone carvings during the restoration project.

The seven 2,700-year-old alabaster carvings are “some of the best-preserved examples of King Sennacherib reliefs in existence,” according to the project’s director, Michael Danti, an archaeologist at the University of Pennsylvania whose team is working with Nineveh State Board of Antiquities and Heritage on ongoing excavations that began in April. “They are rare and well-preserved examples of a very important time period and ruler and a pivotal point in time for Near Eastern art,” he says.

The Assyrian carvings are the only current examples of Sennacherib reliefs in Iraq. “If an Iraqi wanted to see one, they’d have to go to the British Museum. This is a very exciting moment for Iraqis,” Danti says. His project received just over a $1m from the International Alliance for the Protection of Heritage in Conflict Areas (Aliph) to reconstruct the gate, and funding from Penn Museum at the University of Pennsylvania for further excavation.

A number of other ancient sites in Iraq—especially in its north—have also been revived following destruction by ISIS, such as Hatra and Nimrud.

The Neo-Assyrian King Sennacherib, who ruled from 704-681 BC, made Nineveh the capital of his empire, moving it from Khorsabad, founded by his father Sargon II, 15km northeast of present-day Mosul. Sennacherib built up Nineveh considerably, constructing city walls, temples, gardens and the famous Southwest Palace. His military conquests, particularly in the Levant, were well-documented, as was his destruction of Babylon in 689 BC and most of the seven slabs discovered at the Mashki gate site glorify his actions.

Carved in exquisite detail in alabaster or ‘Mosul marble’, the seven slabs found at Mashki gate document military encampments in lush, mountainous regions that Danti speculates could be in modern-day Lebanon. They include depictions of pomegranate trees, date palms and grape vines as well as Assyrian nobles, soldiers, and captives.

King Sennacherib’s conquests of Phoenicia are well known and his siege of Jerusalem and sacking of the city of Lachish in the Kingdom of Judea are detailed in the Book of Isaiah in the Bible. According to Danti, the recently discovered slabs resemble the ones found at Sennacherib’s Southwest Palace, excavated by the British in the 19th-century, depicting his siege of Lachish, and currently on display in the British Museum.

Ironically, what ISIS actually demolished was not the ancient gate, destroyed in a fire when the Babylonians and Medes invaded in 612 BC, but a 1970s recreation of the gate, as conceived by archaeologist and artist Tariq Madhloom. The legendary painter and defender of Iraqi heritage began excavations on the site in 1968, using what he discovered to reconstruct the gate.

Danti’s team found the Assyrian carvings when they dug below what Madhloom had excavated, opening up a doorway he had sealed and discovering the slabs in a long corridor below the layer of debris and artefacts from the fire in 612 BC.

Danti believes that the relief slabs they found, with faint outlines of bits that had been chiselled away, were an attempt to erase and recycle the precious alabaster material by a later monarch—possibly Sinsharishkun, the last king of Nineveh. He says they were likely originally used for the Southwest Palace and then reinstalled in Mashki Gate where they were lost after the Babylonian invasion.

Once the reconstruction of the gate is complete in a few years’ time, the site that has been used by various empires and invaders will come full circle, says Danti, with a proposed visitor’s centre outlining the history of Nineveh.