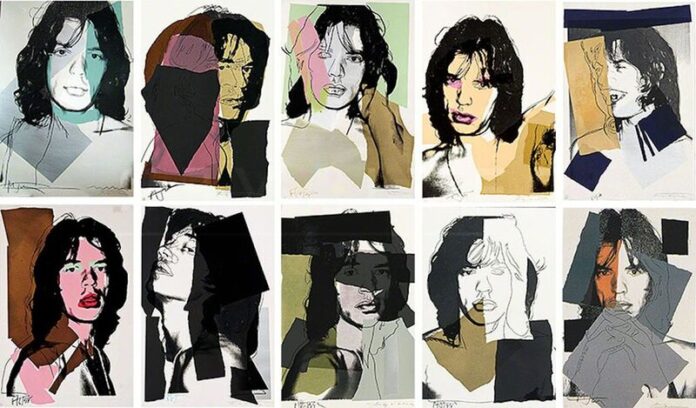 Andy Warhol’s Mick Jagger Complete Portfolio is a series of ten screenshots published in 1975. This is one of Andy Warhol’s most iconic series, featuring the Rolling Stones lead singer from multiple angles.

Warhol’s fascination with fame and celebrity shines not only in his art but also in his lifestyle. Warhol’s “Superstar” set was the most glamorous clique in New York. Icons of the 20th century were constantly in the artist’s orbit. Andy Warhol was a celebrity among celebrities, talking to stars from Bill Murray to John Lennon.

But Warhol and Mick Jagger’s friendship stands out as one of the strongest celebrity relationships, thanks in large part to their heritage in the arts. Mick Jagger’s portfolio documented the cultural power of Jagger and Warhol with brash honesty. Even among other famous Andy Warhol silkscreens, The Mick Jagger Portfolio stands out for its unique take on the musical legend with Warhol’s eccentric yet intimate eye.

Andy Warhol spent a lot of time with Mick Jagger and his then-wife Bianca. Discussed in both Andy Warhol biographies and cultural histories, their relationship is a notable cultural moment in the 70s. Their creative collaboration garnered headlines long before the completion of Mick Jagger’s portfolio when Warhol provided cover art for the Rolling Stones album Sticky Fingers.

It all started when Mick Jagger asked Warhol to design the album cover, giving him complete creative freedom. His only request was that Warhol not make the “Sticky Fingers” cover too complicated to avoid problems during production. Andy Warhol agreed, but ignored the request and went on to produce the iconic cover with a functional zipper.

Warhol’s design immediately attracted attention. The cover of the “Sticky Fingers” album has become a defining image of the Rolling Stones. Andy Warhol perfectly captures the group’s unapologetic sexuality and willingness to push the boundaries of what’s possible.

This episode made it clear that Andy Warhol and Mick Jagger had similar artistic views. They were both iconoclasts, ready to turn social conventions on their heads for the sake of art. The complete portfolio of Mick Jagger, the pinnacle of the Warhol-Jagger friendship, was released four years later.

The portfolio consists of ten screenshots based on photographs taken by Andy Warhol. The series is notable not only for its use of Warhol’s famous bright colors and stenciled lines but also for an early example of “collage” (also seen in Queens Reign).

This style uses overlaid images, jagged borders, and a post-modern aesthetic as an approach to color. It soon became one of Warhol’s greatest contributions to pop art. The collage design reflects Warhol’s unique ability to transform the influences of other iconic pop artists, especially renowned collage artist Richard Hamilton.

The Mick Jagger complete portfolio remains one of Warhol’s most famous celebrity silkscreen series. The images of Mick Jagger are perhaps as iconic as the man himself. Like the cover of Sticky Fingers, Mick Jagger’s portfolio captures the unforgettable images of two of the most famous artists of all time.