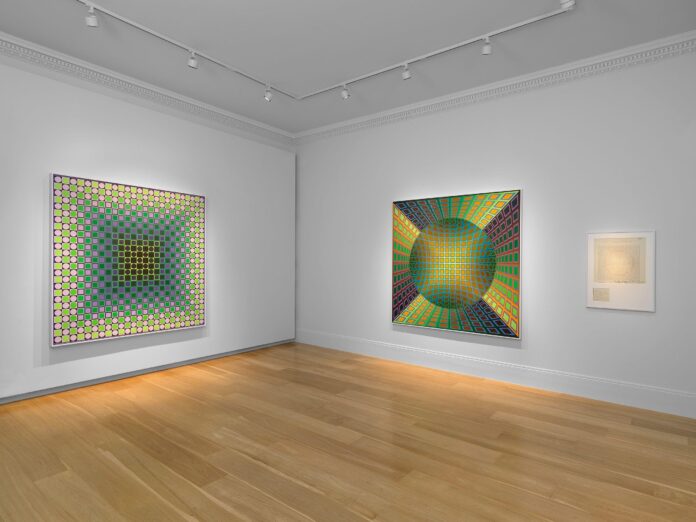 In October, the commercial gallery Mazzoleni Art opened an exhibition of early geometric works by the Hungarian-French artist Victor Vasarely at its London location. Einstein in the Sky with Diamonds shines a light on the “the father of Op art”, whose illusionist works became synonymous with the 1970s.

However, the Vasarely Foundation in France is accusing the gallery of selling works by the artist which they say legally belong to them, as well as printing them in their catalogue without the foundation’s consent. The foundation alleges that Mazzoleni is offering two works that it owns, and a further eight which belong to Vasarely’s family. The gallery maintains that it is selling works consigned by another member of Vasarely’s family, who is not associated with the Vasarely Foundation. The foundation has long accused this family member of having stolen works from the artist’s heirs over the years.

Born in Hungary, Vasarely moved to Gordes in Aix-en-Provence in 1948 and became a French citizen in 1959. He created the eponymous foundation in 1976. From 1981 to 1990, the foundation was entrusted to Charles Debbasch, an academic from the University of Aix-Marseille III.

Despite acting as honorary president of the foundation, Victor rapidly declined from Alzheimer’s from 1994 until his death in 1997. By then, Victor had two adult sons: the younger, Jean-Pierre, known as Yvaral, was married to his second wife, Michèle Taburno. Yvaral passed away in 2002. He had one son from his first marriage, Pierre Vasarely, who remains Victor’s inheriting grandson. Pierre has overseen the Vasarely Foundation since 2009, with his own two sons helping him manage the foundation’s responsibilities.

Debbasch was convicted of embezzling checks from the foundation between 1987 and 1992 and to have sold works to galleries on the side. After Debbasch refused to cooperate with authorities, he was arrested at his office and imprisoned in Marseille.

The year her husband died, Michèle wrote The Vasarely Affair: Art, Power, and Corruption in French, detailing Debbasch’s misconduct. She confirms that the case against Debbasch ended in 2003, and that she is the owner of the works on view at Mazzoleni Art, which she consigned to the gallery for the exhibition.

“The two small Victor Vasarely works involved in Pierre’s discrepancy, which are at the Mazzoleni exhibition. Those two works belong to the list of works I won in court in 2008,” she tells The Art Newspaper. “Those two works, as others, [belonged] to the foundation from 1975 to 1995. In 1995 they were attributed to the two heirs of the artist, his two sons. In 1997 the two heirs gave those works to me.”

In a separate dispute in 2008, Michèle was arrested at a Chicago storage facility attempting to relocate Victor’s paintings within the city, having moved there with her business partner Luis Rojas-Buscaglia in 2004. The paintings, which were estimated to be worth hundreds of thousands of dollars at the time by AFP, were reported as stolen by the gallery owner Thomas Monahan, who raised concerns over their provenance after questions arose of their whereabouts. Per the many judgments following the Debbasch scandal, the works were owned by the foundation and were recuperated to their home country. Michèle too spent a night in prison. She has lived in Puerto Rico since 2012.

Michèle denies this version of events. She claims she won in court in 2008 against Pierre, because the heirs gave the paintings to her in 1997.

Later legal filings claim she worked as assistant to both Yvaral and Victor in their final years and that they gifted her paintings for her work. Documents from ongoing difficulties reveal that Rojas-Buscaglia had relocated to Puerto Rico in 2005 and attempted to sue Michèle in 2009 to determine a commission agreement for selling Vasarely works. Rojas-Buscaglia continued to sell from 2011 through 2013, notably early black and white pictures such as those at Mazzoleni Gallery.

Michèle states in her rebuttal to the Chicago case that Thomas Monahan was to receive 25% of the collection returned.

“It’s not funny, but I often compare the situation to a family (with less money and less lineage) who would kill each other over a colour TV, a home video camera, or a tablet,” Pierre Vasarely says. “It’s an age-old problem, silly and cruel. But after 20 years, the French justice system had resolved this problem in canceling all the works that were taken, completely stolen one after another.”

Michèle subsequently filed further allegations against Rojas-Buscaglia, in which she claims that he encouraged her to falsely represent that he owned the work during Chicago proceedings so they could be returned to her afterwards.

She claimed he did not return the bulk of the profits back to her from his sales, while Rojas-Buscaglia also sued Michèle in 2013, during which time he held 25 Vasarely artworks believed to be worth around $4m, with an additional $1m in six other paintings and antiques. She won and was awarded thousands of dollars in damages for “mental anguish”.

Pierre Vasarely reported that 200 paintings in Michèle’s possession in Puerto Rico were ordered back to Aix-en-Provence in 2013 by the French courts but she refuses to accept the decision. He notes that a total of 600 works left the country illegally for the United States, which then headed to Puerto Rico around 2012.

During the reporting about Michèle’s resale, MutualArt wrote that 1,300 original works and 18,000 silkscreen prints were missing. In 2010, a petition was launched to have the French government save the foundation, after leaky ceilings threatened to close it forever. The matter was resolved and today the government ensures that the foundation remains protected. Ultimately, the law is the final voice in this cacophonous and complex family dispute.

“What I wish is for my stepmother to execute the judiciary ruling,” Pierre said in conclusion. “It is not me; it’s not anyone else; it’s the French justice system, who are asking a French person who lives abroad to return expert works to France. It’s simply following a judicial order.”

But Michèle disagrees. “I have so many documents proving my ownership,” she tells The Art Newspaper. “The federal court decision was that during four years of inquiry, Pierre Vasarely, who was accusing me, did not bring any proof that could sustain his allegations. All the paintings where returned to me.”

Regarding ongoing legal battles, Michèle says about her family and legacy. “I have no personal interest in any scandal. My duty is to protect [the works] the artist gave to me, to protect the name I am wearing in their memory.”

She concludes, “…It is extremely sad to have to accept that the foundation in Aix created by the artist has merely become a space for politics and scandal. We are not in art anymore; we are in a disaster.”

A spokesperson for Mazzoleni gallery tells The Art Newspaper: “The exhibition features works from various consignors, including Michèle Catherine Vasarely [Taburno]. We are saddened by the succession dispute between Pierre Vasarely and his family which has regretfully been going on for decades to the detriment of Victor Vasarely’s reputation.”

They add that the show was curated by professor and art historian Pierre Arnauld, an expert on Vasarely who was a member of the scientific committee of the Vasarely Foundation, and who co-curated the major 2019 retrospective at Centre Pompidou, Paris.

Her Art Was Once Viewed as “Obscene.” Now Martha Edelheit’s Nudes Are Finally Gaining Acclaim After Decades in Obscurity