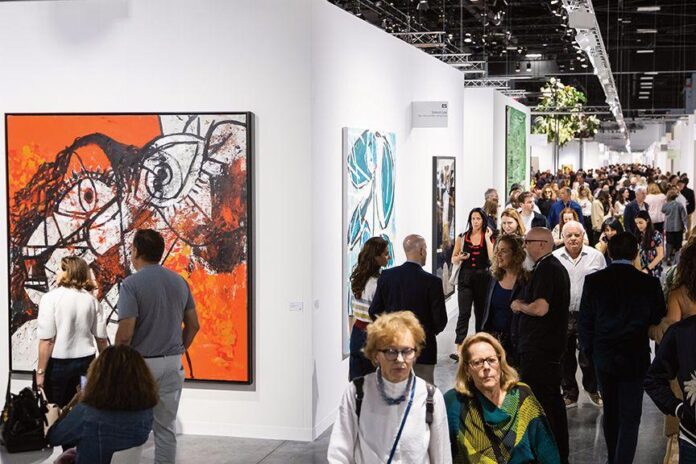 Art Basel Miami Beach is boosting its traditionally enormous exhibitor list by a further 12% for its upcoming 20th anniversary edition, which stands to be its largest ever. The fair will feature 283 participating galleries this year, 33 more than last year. In pre-Covid times (2016-19), the fair peaked at 269 exhibitors.

Twenty-six of the galleries participating in the fair this year will be doing so for the first time, and over half of the exhibitors will be from North and South America. The strong presence of galleries from the Americas echoes the Armory Show’s focus this year on art from Latin America and the Latino/Latinx diaspora.

“It is truly exciting to celebrate our 20-year presence in Miami Beach,” Art Basel’s global director Marc Spiegler said in a statement. “Over the last two decades our show has not only reinforced its pivotal position in the region—uniquely bridging the art scenes of North and South Americas, Europe and beyond—but also played a galvanising role in the city’s profound cultural transformation. The increasingly diverse range of galleries and artistic voices represented will make our show richer in discoveries than ever before.”

The fair’s main gallery sector will feature 213 exhibitors, including heavyweights like Hauser and Wirth, Pace and Gagosian, each of whom were noticeably absent from the Armory Show in New York earlier this month. Several galleries that did not make it to South Florida in 2021 will return to the floor, including São Paulo’s Galeria Raquel Arnaud, Zürich-based Karma International, Berlin-based Galerie Barbara Thumm and New York’s Marlborough Gallery. Seven galleries have graduated to the main section from the Survey and Nova sections of previous editions.

With 23 galleries participating, the Nova section focuses on works made in the last three years and will include a solo presentation of new photographs and sculptures by John Edmonds from Company Gallery and, fresh from the Venice Biennale’s The Milk of Dreams exhibition, work by Pinaree Sanpitak will be on view at Yavuz Gallery.

The Survey section, which is designated for work created before 2000, hosts the bulk of newcomers with 17 first-time galleries. A highlight there will certainly be Cristin Tierney’s booth of historic works by Dread Scott presenting a study of violence from the last 15 years of the 20th century. The Editions section will return with 11 galleries.

News about the fair’s Meridians and Kabinett sectors—for large-scale works and hyper-focused stands-within-stands, respectively—as well as a few birthday surprises, is expected in the coming weeks.

Though Art Basel’s Floridian franchise was originally scheduled to debut in December 2001, the organisers delayed its debut by a year following the terrorist attacks of 11 September 2001.

‘We Are Not Perfect People—Like Any Other People’: Qatar’s Art Scene Wants to Break Down Stereotypes Amid a Controversial World Cup