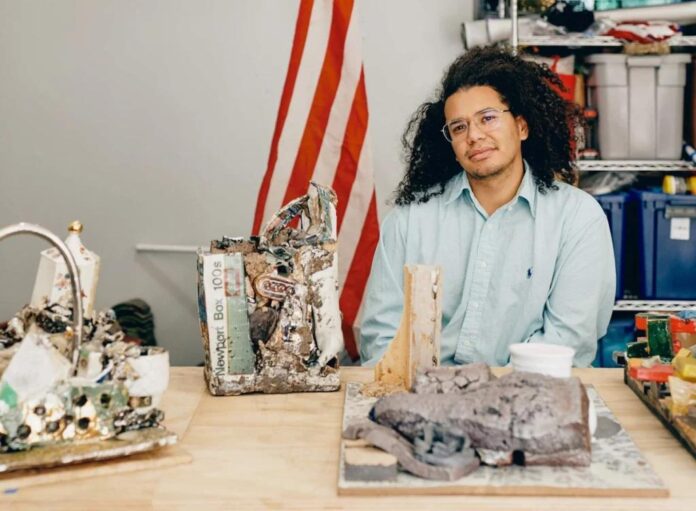 Artist Kahlil Robert Irving has filed a complaint against the High Line Hotel in New York alleging that he was racially discriminated against during a stay there earlier this year.

In the complaint, filed this week with the New York State Human Rights Division, Irving said that two hotel employees, both white, entered his room without knocking on the morning of January 22. The two men accused the artist of being homeless and demanded that he leave the premises immediately, according to the complaint.

Irving, an accomplished St. Louis-based artist who had an exhibition on view at the Museum of Modern Art at the time, was two days into his stay at the hotel when the incident occurred.

Using what Irving called “abusive language,” the employees allegedly screamed at the artist until he showed them his reservation information, then promptly left without apology.

“To state the obvious: As a 29-year-old Black man, it was highly traumatic to be confronted by two older white men who barged into my hotel room unannounced while I was sleeping,” Irving wrote in a letter appended to the complaint, which was shown to Artnet News.

“It is impossible, except for racial animus, to imagine why the hotel manager would not have first called my room if there were questions or knocked politely to make a friendly inquiry, instead of immediately taking a highly confrontational approach, choosing accusations over inquiry and immediately making aggressive threats without any provocation,” the artist said. “It is impossible to imagine, except for racial animus, why the hotel manager and associate ignored the fact that I had a hotel key card in plain sight in the room.”

“Putting all of this together,”  Irving concluded, “it is impossible to imagine that this incident was not racially motivated.”

A press release from the lawyer’s firm, Eisenstein Malanchuk LLP, explained that Irving opted to file the complaint after the hotel dismissed the incident as a “serious misunderstanding.”

Eisenstein further told Hyperallergic that, in an email sent to a regional manager for High Line Hotel’s parent company, MCR Hotels, he claimed Irving was entitled to “substantial monetary compensation … in an amount sufficient to serve as a deterrent and as a motivation to properly train hotel staff.” The lawyer also demanded “a full accounting of disciplinary action and training that the hotel is implementing as a result of this incident.”

A Human Rights Division investigation into the artist’s complaint is likely to come next. If Irving and the hotel can’t reach a settlement agreement, then the case will move on to a public hearing with an Administrative Law Judge, who will recommend a resolution between the two parties.

A multi-disciplinary artist whose creations often combine physical debris with digital collage, Irving has been included in high-profile shows at the Whitney Museum of Art, the New Museum, and Mass MOCA. Examples of his work belong in the collections of the Carnegie Museum of Art, the Kansas City Art Institute, and the RISD Museum.

Representatives from the High Line Hotel and MCR Hotels did not immediately respond to Artnet’s request for comment.

“How can you escape the conclusion that two white male hotel employees are engaging in racial stereotyping, assuming that a young Black male could not be a proper hotel guest,” the artist’s attorney, Larry Eisenstein, said in a statement. “Can you imagine this incident happening to someone who is white?”