Home News Art in the shadow of war: curating a show at Latvia’s Mark... 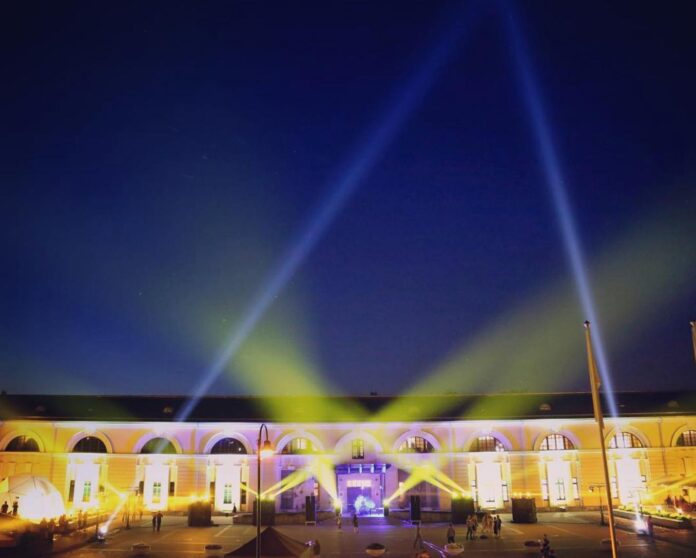 We stand around 80 miles from the Russian border, 20 miles from Belarus, near where NATO wants to up its military presence to deter a Russian incursion. We are in the Russian-speaking Latvian city of Daugavpils, to open an exhibition in the Mark Rothko Art Centre, an important art hub in the region, grounded by the presence of six Rothko paintings loaned by Kate and Christopher Rothko to the city where their father was born.

Enrica Costamagna and myself are co-curating a retrospective of Kang Haitao—a Chinese artist not called Ai Wei Wei so not as well known as he ought to be in the West. We have borrowed work from various collections including Shanghai’s Long Museum and invited the important film director Feng Xiaogang to write a laudatory preface. But none of us imagined that the exhibition would open in the shadow of a warzone. “If China explicitly supports Russia, the show will be cancelled,” a Latvian political friend advised.

Signs of conflict are everywhere, even in the cosmopolitan, art nouveau city of Riga where we land. We had hoped to have an early glimpse of the Riga Biennal but it has been postponed until summer 2023—the war and its effects too visceral here.

Ukraine flags dot the streets which seem—on this Friday evening—to be full of hen and stag night revellers. The city’s pro-Ukraine sentiment has led the government to wade into the culture wars that surround monuments praising the Soviet liberation of Latvia from Nazism. Around 70 monuments are scheduled for removal or demolition, including an 80m-high obelisk and bronze sculpture that sits in the middle of Victory Park in Riga. Police cars patrol the area and the barriers keep visitors 200m distance—with photography banned. Latvia is definitively changing its relationship with the Soviet Union since the Ukraine war. As early as 1997, Latvian ultra-nationalists were arrested trying to blow up the monument. Now it is government policy.

At the edge of a forest

On our way to the Rothko Centre we stop off to visit Skuja Braden—the duo whose painted ceramics occupy the Latvia Pavilion in Venice and are one of the highlights of the Biennale.

I am one of the curators of the Guangzhou Triennial (opening December 2022) and I want them there—but it does take us some time to find where they live. Off the beaten track might be an understatement.

They know that lazy people from UK will compare them with Grayson Perry; if they have to have a British comparison, they prefer Gilbert & George. But that doesn’t seem quite right, either. Think Angela Carter’s wonderful fairy tale retellings in The Bloody Chamber and Other Stories (1979). Fairy stories, Japanese culture, geishas (“the first modern women”), performance, wit and fearlessness—this is what brings Carter to mind (even if she did not share their Zen Buddhism).

Although they have made pots featuring Napoleon and Putin among other dictators, their grudge is with the anti-woman, anti-gay Latvian culture shaped by the powerful Lutheran church—or rather it is the culture that holds a grudge against them.

It may be a terrible truth that the war in Ukraine has led to (deserved) visibility for the Latvian, Polish and Hungarian Pavilions in Venice, and for the artists showing there.

We arrive mid afternoon at the Centre, after a drive through forests where storks nest in high trees and where signs regularly memorialise the Nazi “killing field” victims. Around 80% of the city’s population speak Russian as their primary language; and the war has changed their daily lives. With Russian TV and magazines—even ones devoted to cooking and gardening—banned, these citizens are culturally disenfranchised. The Riga government and the EU have not diminished their alienation by choosing another city rather than Daugavpils to be the Latvian city of culture in 2027.

Kang Haitao’s work looks marvellously at home in the Centre, near the Rothko paintings room. Kang Haitao was born in 1976, into a world shadowed by the Cultural Revolution and looking forward to China’s globalisation.

Although Kang’s talk is peppered by references to Morandi, Giacometti, the French theorist Maurice Blanchot and Feng Zikai, he has remained rooted in provincial Sichuan where he was born. His overt subject is his surrounding world—old factories, schools, walls and trees. But he is a Buddhist and uses this everyday lexicon to explore spirituality (Kate Rothko once told me that the Rothko Chapel in Houston has a large number of Buddhist visitors.)

If the opening of the show is evidence, then Kang’s work resonates remarkably with the visitors who, too, are caught between worlds—the old Soviet one and the complex world of the EU. Around 20% of the Latvian population has left the country since EU accession.

Daugavpils is a provincial city and Latvia is hardly hailed as the heart of Europe. But at least here art isn’t talked of as an asset class. Here art—and I don’t want to be sentimental—seems part of the warp and woof of the world, part of the argument a culture has with itself. As the old adage goes: the past is not dead, it is not even past.

• Tender is the Night: the Art of Kang Haitao runs until 16 October at the Daugavpils Mark Rothko Art Centre