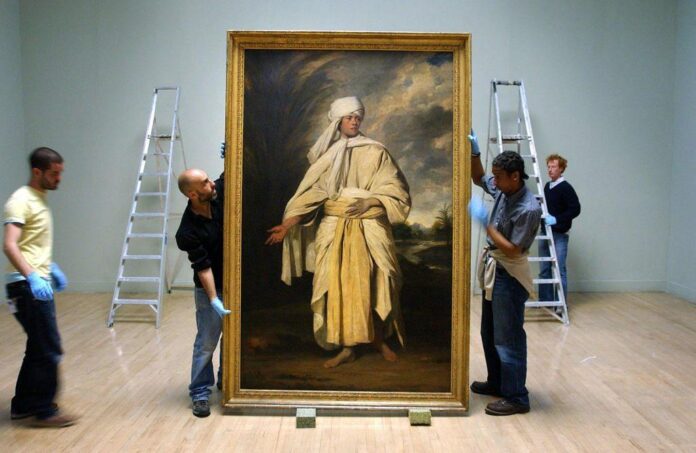 A Podcast on the Death of Ana Mendieta – In an upcoming podcast by Pushkin and Somethin’ Else called “Death of an Artist,” former curator of L.A. MOCA Helen Molesworth investigates the lead-up to the death of the famed performance artist, the trial of her husband Carl Andre, and the aftermath of his acquittal. It premieres on September 23. (Vanity Fair)

Wolfgang Tillmans Weighs Running for Office  – In an interview about his upcoming 35-year retrospective at MoMA, which opens on September 13, the famed photographer says he’s spoken with lawmakers about standing for the Bundestag, Germany’s lower house of Parliament. “If you are an ardent proponent of democracy, then you have to actually consider being a candidate,” Tillmans says, adding that he only ruled out working with Germany’s left-wing party, Die Linke, and instead wanted to “have as many ears” with conservative politicians and voters. (New York Times)

National Portrait Gallery Wants to Raise £50M for a Painting – London’s National Portrait Gallery wants to raise the stunning sum for Joshua Reynolds’s . If it succeeds, this would be the most expensive acquisition ever made by a U.K. museum. The work, which dates to around 1776, in the possession of horsebreeding millionaire John Magnier. An export ban was placed on the work but it risks leaving the U.K. if a buyer is not found. ()

Columbus Museum of Art Workers Plan to Unionize – Staff from the museum are working to make a union, citing concerns about treatment and retention, especially in the wake of the pandemic. After major layoffs, staff who remained face increased mental and physical stress. The museum has not yet confirmed whether it will voluntarily recognize the union. (Columbus Dispatch)

Prospect.6 Announces Curatorial Team – Ebony G. Patterson will serve as the co-artistic director along with curator Miranda Lash for the sixth edition of Prospect New Orleans, set to open in fall 2024. Patterson is the first artist to take on the role, though she has extensive experience working with Prospect, as both an artist and curatorial council member for the triennial. Lash and Patterson first met back in 2017 when Lash was the curator at the Speed Art Museum and organized an exhibition of Patterson’s work. “I have always been moved by the history and culture of New Orleans,” said Patterson in a statement, “it occupies a unique space in the U.S., as a much closer reflection of the richness of the global majority.” (Press release)

Dallas Museum of Art Appoints New Curator of Asian Art – Jacqueline Chao joins the DMA from the Dallas-based Crow Museum of Asian Art, where she has served since 2016. She specializes in traditional and contemporary Chinese ink painting and visual culture. (Press release)

Francis Alÿs Wins Museum Ludwig’s Wolfgang Hahn Prize – The Belgian-born, Mexico City-based artist is the recipient of the  $100,000 cash award. He will also have his work acquired by the Museum Ludwig in Cologne, and will get an exhibition there in fall 2023. (Artforum)

John Lennon’s Mother’s House Hits Auction Block – The Liverpool home where the famous musician’s mother lived is going under the hammer at Omega Auctions and could fetch up to £250,000. The Blomfield Road house, dubbed “the House of Sin” by Lennon’s aunt, served as the base camp for the young musician and his bandmates, including the future Sir Paul McCartney. Although John himself lived down the road with his aunt, he and his friends used the detached garage of the house for jam sessions. (Evening Standard)

Elizabeth Peyton Designs Poster for Timothee Chalamet Movie – The American artist, whose subjects have included celebrities and historical figures ranging from Napoleon and Marie Antoinette to Kurt Cobain and Ed Sheeran, has painted the cover image for actor Timothee Chalamet’s forthcoming movie, Bones and All. Directed by Luca Guadagnino (whose 2017 film Call Me By Your Name shot Chalamet to superstardom) follows two young lovers as they trek across 3,000 miles of backwoods America. (Instagram)

How To Integrate Art Into Your Wedding