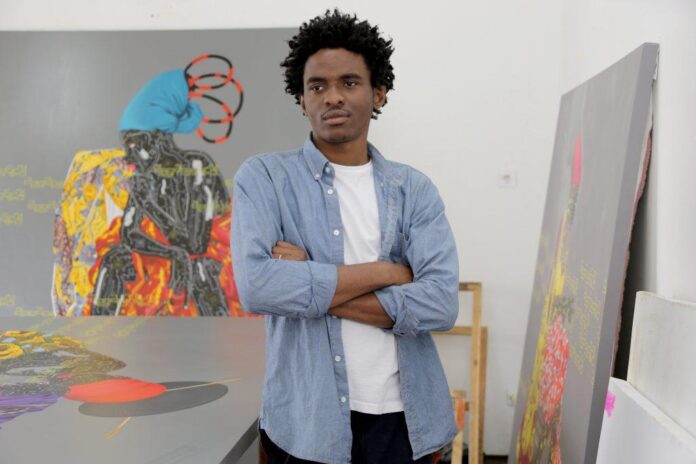 In a popular district of Kinshasa, the energetic capital of the Democratic Republic of Congo (DRC), a person encased in brown paper bags surrounded by a large crowd and policemen forcefully breaks through the wrapping, tearing it apart until its tattered pieces lie scattered on the unpaved dirt road. The female Congolese artist Sarah Ndele emerges; on the wrapping, words like “freedom” are written in French and Lingala, the local Bantu language spoken in the northwest of DRC.

Ndele’s performance in early July was a metaphorical revolt: a way to free herself from society’s expectations and from the challenges of everyday life in Congo. She, like so many, wants to be free from the trials of the present but also the weight of a past that still hangs heavy in Congo, where the burden of the country’s colonial history can still be felt.

“The time has come when we must finally get out of this straight jacket to change the world and Africa,” Ndele wrote on her Instagram in French to commemorate the performance, which was part of the second edition of Kinshasa’s Yango Biennale which ran from July 13 until August 14. 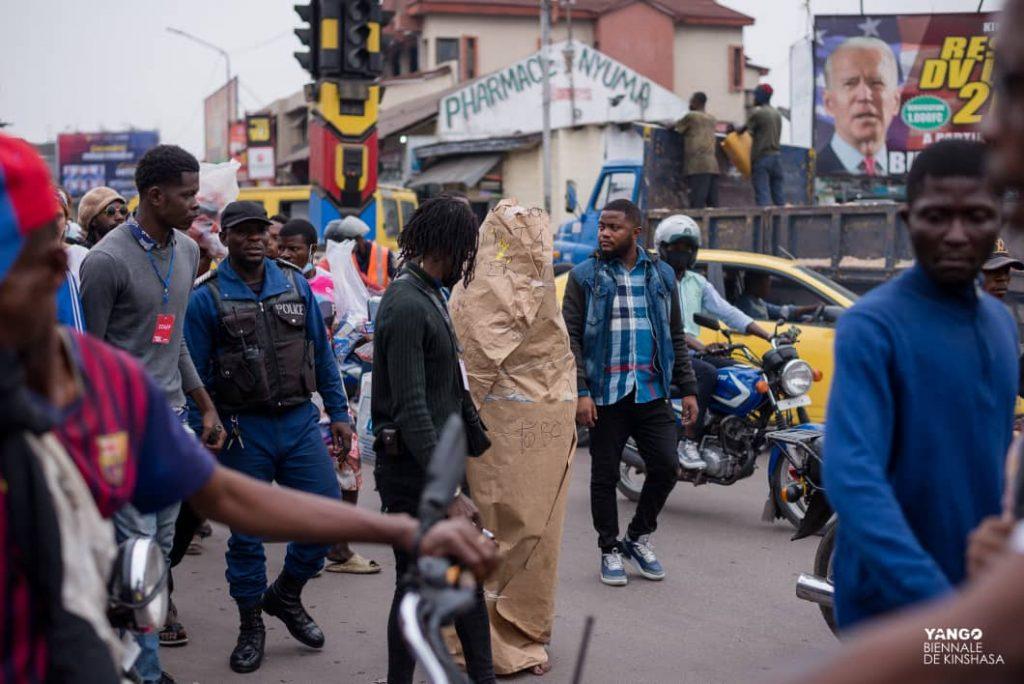 Sarah Ndele’s “We Need to Get Out of Our Comfort Zone” performed on July 18, 22 in the parking lot of Kintambo Magasin during the second Yango Biennale. Photography by Samuel Mwani

In the crowd, some cheered while others remained puzzled. A few even cried and others protested. The biennial, which was launched in 2014 by the late Congolese photographer, painter, and film producer Kiripi Katembo Siku (who died of cerebral malaria on August 5, 2015) exuded a similar energy to Ndele’s piece. Titled “Tokozela lobi te/Nous n’attendrons pas demain” (in English, “We will not wait until tomorrow”) and curated by Havana-born and Marseille-based art historian Sara Alonso Gómez and French-Congolese philosopher Nadia Yala Kisukidi, the biennale took place across various neighborhoods in Kinshasa.

Life in the capital pulsates with a magical albeit chaotic energy. In Africa’s third-largest city, estimated to have around 15 million inhabitants, beat up cars can be found on every highway, while unpaved backstreets are filled with dust, mud, and trash. An ongoing concoction of aggression, joy, and despair can be felt at every corner. Yet above this intense cacophony, singing voices and music can be heard emanating from bars and restaurants as Kinois dance and converse both gravely and with hope.

In this city, where a scarcity and unpredictability of electricity result in regular blackouts and a failing healthcare system means treatable illness often result in death, art has become a way to survive mentally and intellectually and recall the real narratives of Congolese history.

“Art is a matter of life in Congo,” Gómez told Artnet News. “The artists give everything to their art because it is through their imagination that they have found a way to reverse [the conditions of] their daily living which is very tough. It is their only way of existence.”

In another performance for the Yango biennale, Congolese artist Anass Flory Sinandaku sat in a chair surrounded by onlookers, as his blood was taken. He then used it create artworks hung on the wall behind him. The gruesome act reflected on exploitation in Congo both domestically and internationally—a theme explored by many Congolese artists searching for meaning and resolution amidst Congo’s paradoxical reality. 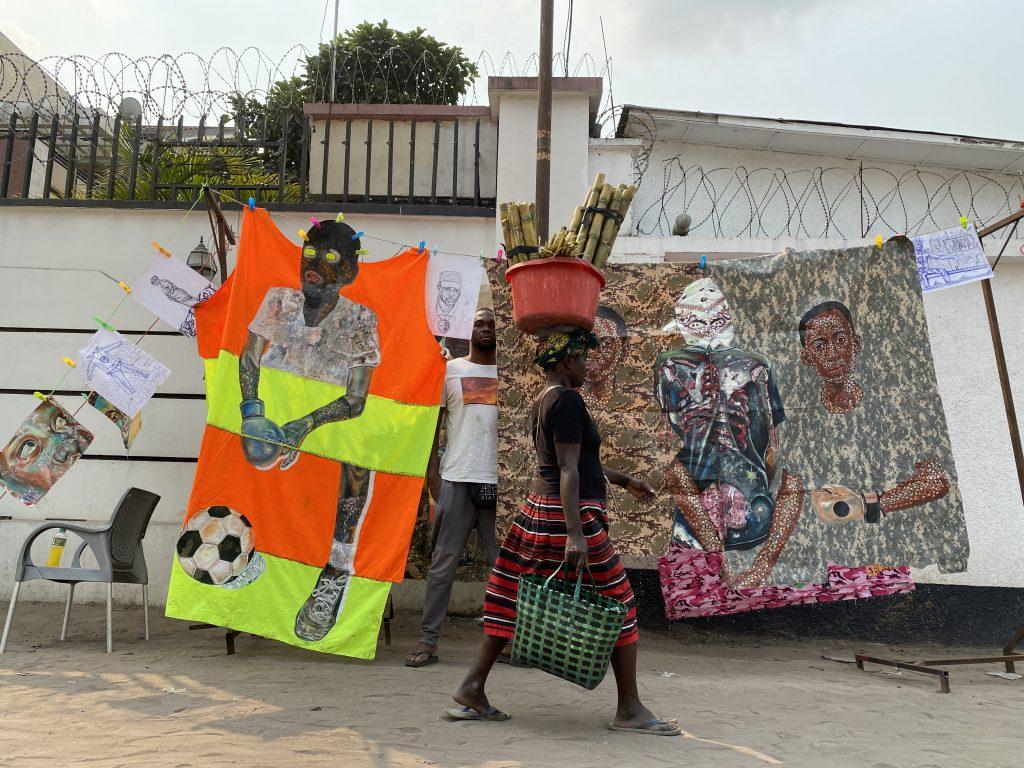 Art as Survival, Revolt, and a Way of Life

Just a few decades ago, being an artist in Congo was regarded with esteem. During the 1970s, under the reign of autocratic leader Mobutu Sese Seko, art and culture was given full attention as a part of “Zairianisation,” Mobutu’s program that aimed to restore African authenticity to the country and erase all traces of western colonial domination. Art thrived, and artists like Chéri Cherin, Moke, and Chéri Samba all prospered in the country and abroad. There were numerous galleries around and Kinshasa was alive with creative zeal.

But that era is now gone. Political uncertainty ahead of DRC’s upcoming 2023 elections, war, and poverty all plague a country that is considered to be the richest on earth in terms of natural resources, with untapped deposits estimated in excess of $24 trillion.

“The horrors of Belgian colonial rule in Congo have been erased from Congo,” Eddy Kamuanga Illunga, one of DRC’s rising stars, told Artnet News in his studio in Kinshasa. “To gain obedience from the Congolese, the Belgian Catholic Church taught that art was bad. They went into villages and burnt their sculptures.”

Ilunga, who is 31, is completing several vividly colored large-scale paintings. They depict young Congolese boys and girls, their Black bodies scarified with motifs reminiscent of electronic circuits produced from cobalt buried deep in the Congolese earth. The valuable mineral is often mined by children and used to make the lithium-ion batteries used in electric vehicles, laptops, and smart phones.

“To save Congo, we need a revolt—a mental revolt, a change in mentality towards the past and present,” added Ilunga.

Hilary Balu, known for his paintings depicting Congolese society transformed by consumerism and globalization, agreed. “Africa must reconstruct itself through culture because culture is the spirit and civilization of a people,” he said. 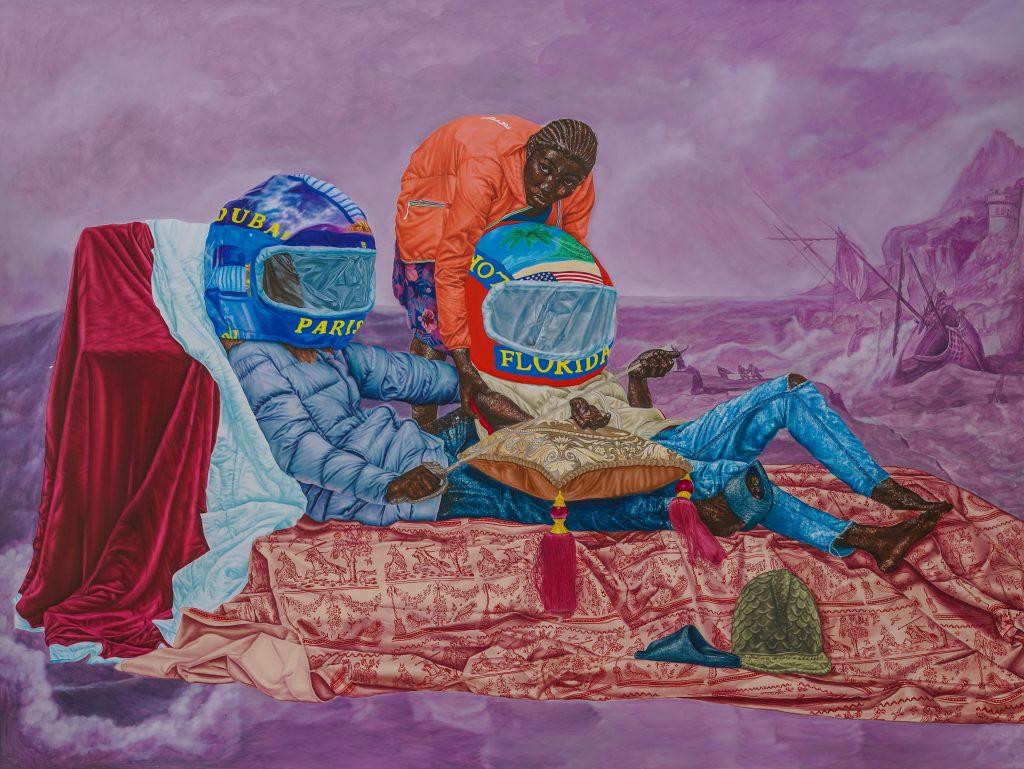 Kinshasha-based sculptor Freddy Tsimba also wants to evoke change through his sculptures made from metal spoons, bullets, and war cartridges. “From these pieces, someone has died or fallen on the ground. By creating art from them, I give the pieces another life,” Tsimba told Artnet News.

Performance art collectives Kongo Astronaut, established in 2013 by duo Michel Ekeba and Eléonore Hellio, and KinAct, a festival founded by artist Eddy Ekete in 2015, similarly aim to raise awareness through performance art about the environment and other issues destabilizing Congo.

Kongo Astronaut, a figure with its suit plastered with digital debris made from minerals mined in Congo, can be founded spontaneously when walking the streets of Kinshasa. 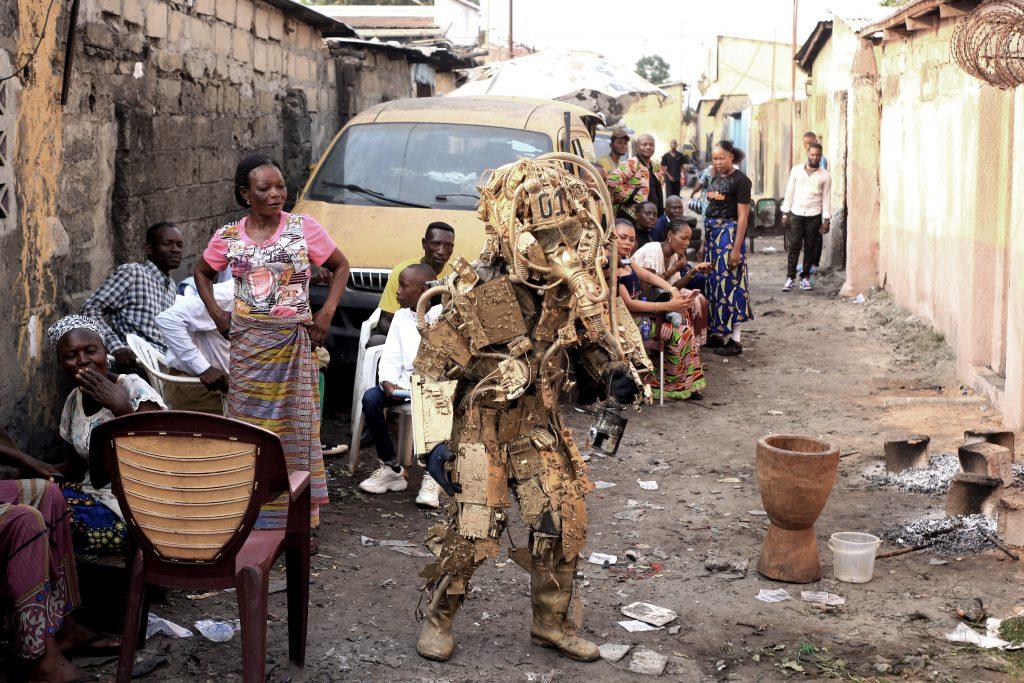 “We wanted to wake people up to the problems associated with the coltan mineral necessary for the functioning of all cellphones, laptops and videogame consoles,” said Hellio.

Ekete’s performers, wear costumes made of trash, tin cans, paper bags, old newspapers, and other items and they can be spotted around Kinshasa during KinAct’s 60 to 70 performances per year.

Largely self-funded, it is at times difficult for artists to pay expenses, though they persevere.

“But art is stronger than us,” Ekete said.

Lack of Visibility and Need for a Local Market

Despite its abundance of talented artists, there are very few spaces for artists to exhibit in Kinshasa.

There is, however, DRC’s only art school: the esteemed Académie des Beaux-Arts de Kinshasa. To study there, Congolese artists must be able to afford the tuition. The school, partially funded by the government, was founded in 1943 by Belgian catholic missionary Marc Wallenda. Until recently, its curriculum was highly classical and European. Several artists, notably Ilunga and Vitshois Mwilambwe Bondo, left the school and went on to develop their more individual styles.

In recent years, much has been done to liberate the school’s curriculum. “What is crucial for Kinshasa is the democratization of the cultural space,” current director professor and artist Kalama Akulez Henri told Artnet News. “We need to be free to express ourselves aesthetically in the way we wish.”

In 2010, Bondo established Kin Art Studio to offer an alternative space for artists to create, exhibit, and sell their work. In 2019, he launched the Congo Biennial for which he serves as artistic director. 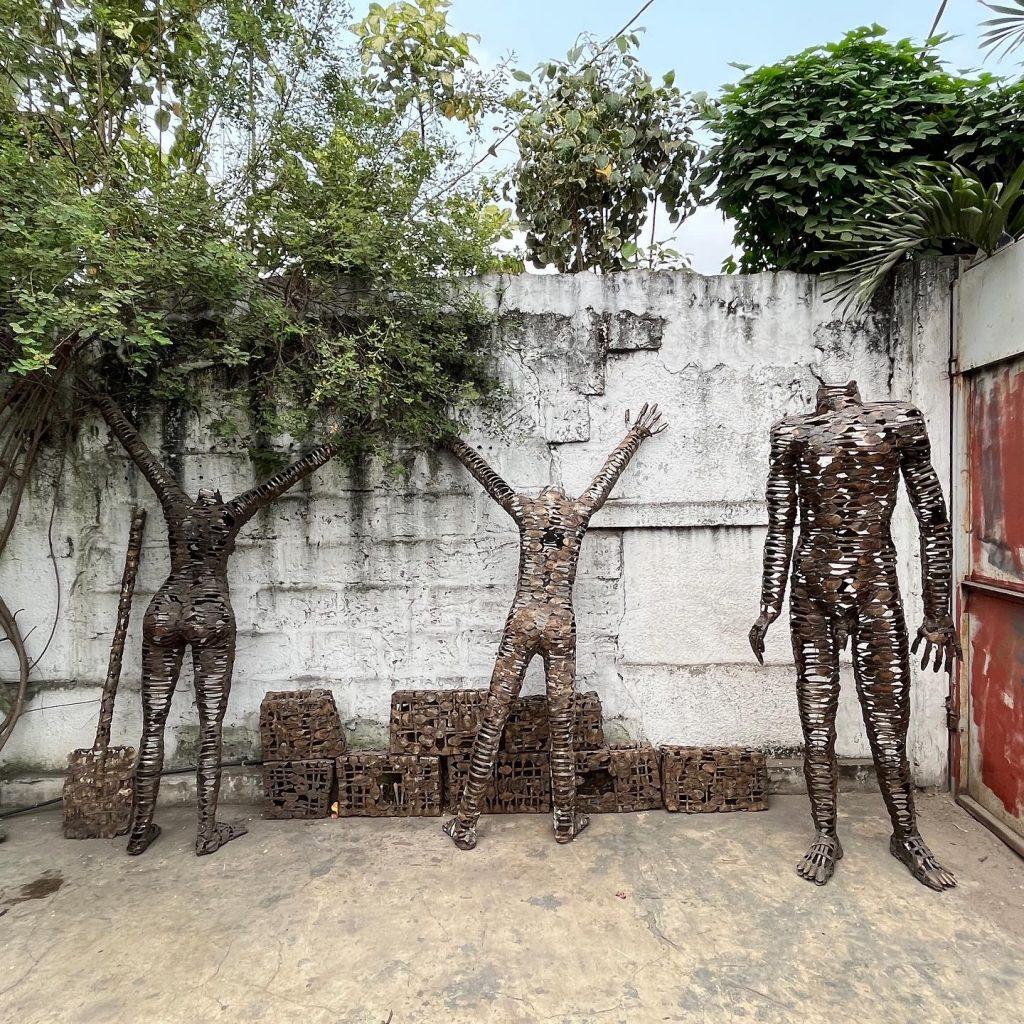 “My goal is to bring art to the Congolese people,” Bondo told Artnet News. “Through art, we hope to recuperate a part of our heritage.”

Fundraising has not been easy. Bondo often supports the biennial from his own pocket while raising funds. “This year 80 percent of the money came from a mix of local banks and private companies,” he said, stating that their budget is around $100,000 to $200,000.

Glimmers of change are in the air.

Yetu Gallery will open in mid-September inside the $21 million Korean-funded National Museum of the Democratic Republic of Congo in Kinshasa, which opened in 2019.

“Many of our top artists go abroad for representation, and in Kinshasa we don’t yet have galleries that can properly represent the artists at home and internationally,” said its founder and director Baraka Rumamba, a Congolese entrepreneur and real estate investor. Part of the earnings from Yetu will go to support the museum, which is partially funded by the government. 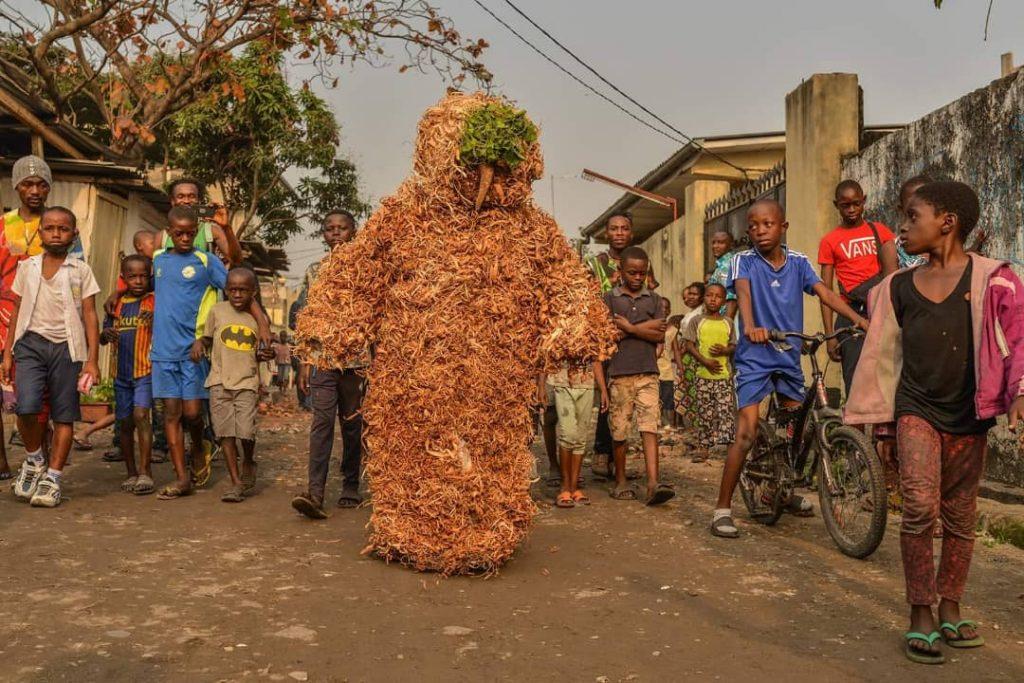 “Stop the deforestation of the Equatorial Forest,” a performance during KinAct Festival in Kinshasa in August 2022.

Another challenge for Congolese artists is that there are two markets: one local and one international.

“The artists that make it abroad are collected largely by westerners; their prices become too expensive for Congolese buyers and often the tastes don’t match local preferences,” said Guy-Robert Lukama, a Congolese businessman and collector who began his collection when working in Belgium after seeing the Congolese art collections of his Belgian colleagues. He wanted to ensure that he collected and supported his country’s artists.

Chéri Samba, one of the DRC’s biggest selling art exports, is a case in point. His work, represented by French dealer André Magnin, fetches up to $140,000 at auction.

“Samba’s art doesn’t appeal to local tastes; it fits an external perception of Congo,” added Lukama. “At the beginning, his cartoons were the best way to tell the story of Kinshasa but progressively they only depict our stereotypes, and most Congolese can’t afford his work.”

At his studio located in the popular Commune de Ndjili, Samba said he doesn’t interact with the Kinois art scene. Others in the city affirm they haven’t seen the artist in years.

“We have a cultural crisis in Congo; people have lost trust in their culture,” said Lukama. “We need to restore that trust. We need at least 10 galleries, more institutions, and local collectors to rebuild the scene and remember our heritage.”