Since he was a child of 12, rearing pigeons has been a major part of Anton van Dalen’s life. The 84-year-old artist, who grew up in the Netherlands and whose family emigrated to Canada after World War II, sees a parallel in that journey and the birds’ migratory lifestyle, and has incorporated them into his work for decades.

His current show at New York’s P.P.O.W., titled “Doves: Where They Live and Work,” includes works from a series of paintings of anthropomorphized pigeons going about their daily lives that Van Dalen has been working on since 1989. He’s had plenty of material in that time—he keeps a pigeon coop on the roof of his East Village apartment, where he lives and work.

Van Dalen has bred the birds, which are the high-flying Tippler variety, to have pure white feathers. In his work, he uses them as a symbol of peace, their ability to make a home wherever they land standing in opposition to the violence and discord so often sowed by human society.

Ahead of the exhibition’s opening last month, we spoke to Van Dalen about his home, his studio, and his birds. 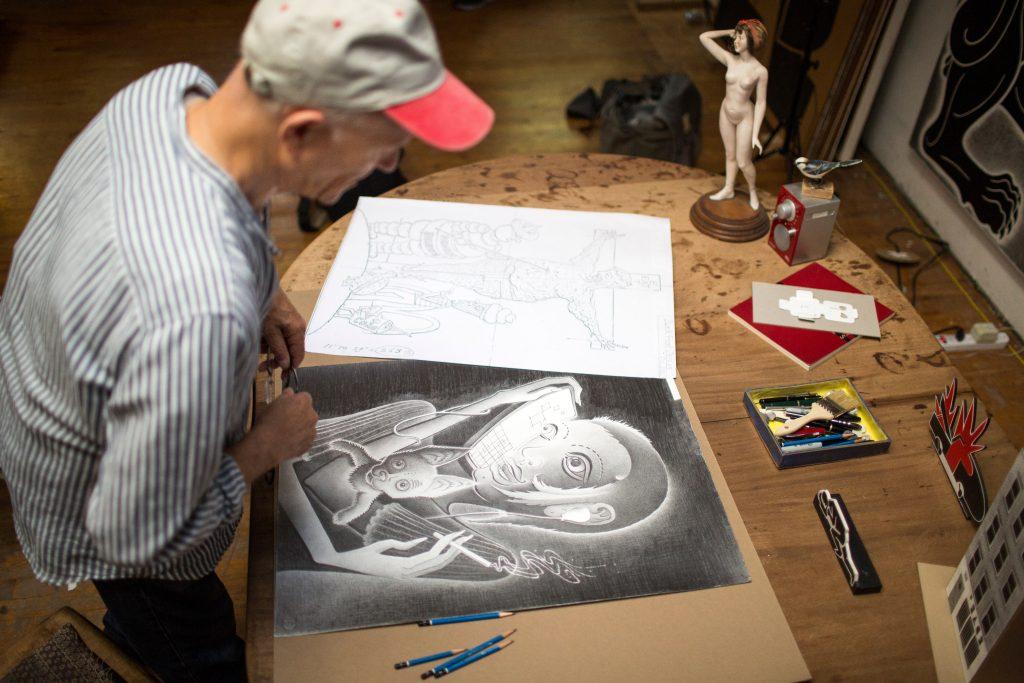 Anton van Dalen working in his studio in (2020). Photo by Anthony Lindsey.

Tell us about your studio. Where is it, how did you find it, what kind of space is it, etc.?

I have lived in the East Village since around 1968. But the thing is, I have always had very specific ideas of a workspace and I always try to have it in my immediate surrounding whatever my life is. I’ve never had a separate space; it’s always been at home and usually working on the table that we often use for everything.

It is very important for it to be part of the reality of my everyday life. I have always done that since I was a kid. I used to work at the table where we had dinner and when people visited, we sat around, and I continued to do that in all the different places I’ve ever lived.

The idea was that art should not be a separate space, but should be the space where you work on anything and everything. It’s a populous idea of a workspace. It is not an inner sanctum, but a family space or common space—and that’s a part of how I feel art should be, that it should come from the whole flow of life, not just a specialized or high-end section of it.

Figurines at the home and studio of Anton van Dalen. Photo courtesy of the artist.

I’ve never had a studio assistant. For one, I wouldn’t even know what to tell the person because I am sort of trying to figure it out as I go along. And even when I worked for Saul Steinberg, he never had a studio assistant, and we were mostly sitting around talking about whatever was on his mind and I would be the good listener. And that is sort of what my situation is too. I wouldn’t even know what to tell a person because I am not an appropriator of images—the images slowly evolve through my own experiences. 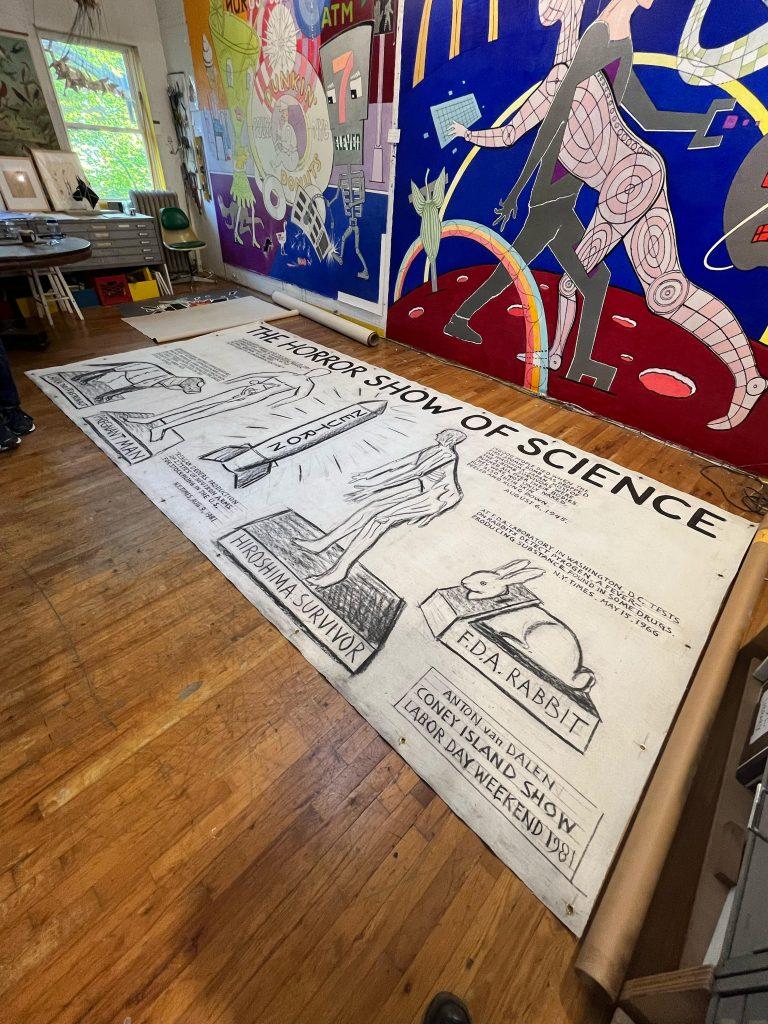 Artwork by Anton van Dalen at his home and studio. Photo courtesy of the artist.

A lot of it has to do with what we have been going through with the pandemic. I think that sort of became the subject for me—the people going through this, often alone trying to figure out where their life is at. I think it has been a really difficult time for everybody. I just consider everything humans are going through also happens to artists, and I reflected upon my own personal life and neighborhood, my history in Holland—pull it all together. 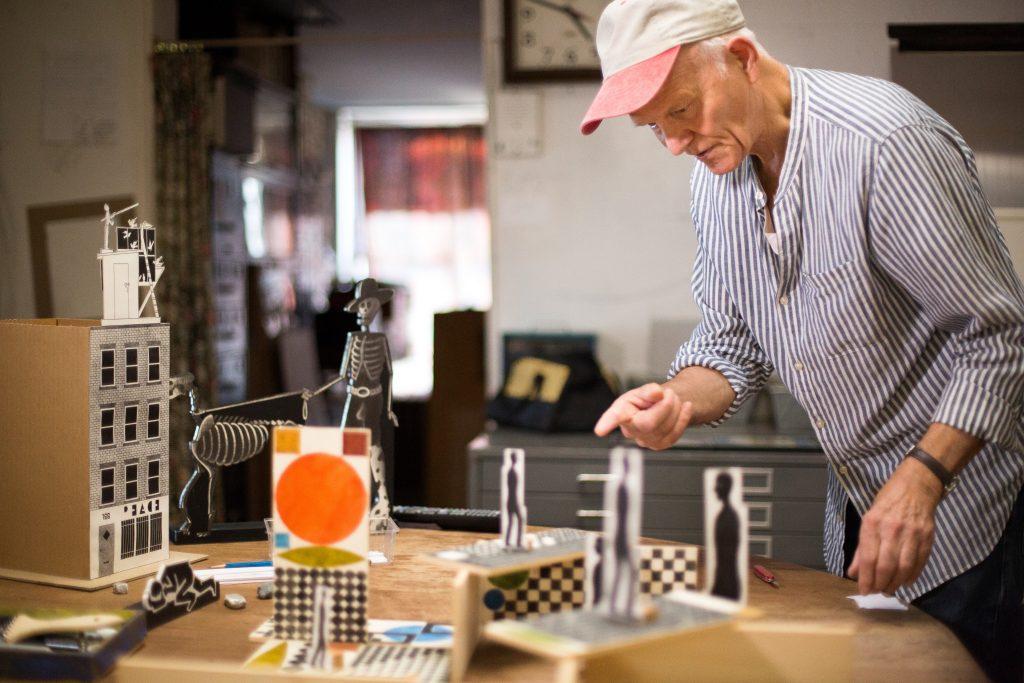 Anton van Dalen in his studio in (2020). Photo by Anthony Lindsey.

Well, it’s 99 percent of the time a pencil. I do a lot of erasing and scribbling and then I sort of clean it up slowly, so there’s a lot of editing involved because I want something that people can readily read as a reference to their own lives. And it’s also something that is part of the common experience of mine, of my neighborhood, of my community, and the world we live in. What is going on in our culture that personifies what is happening at that moment. And then that finds a way into my work. 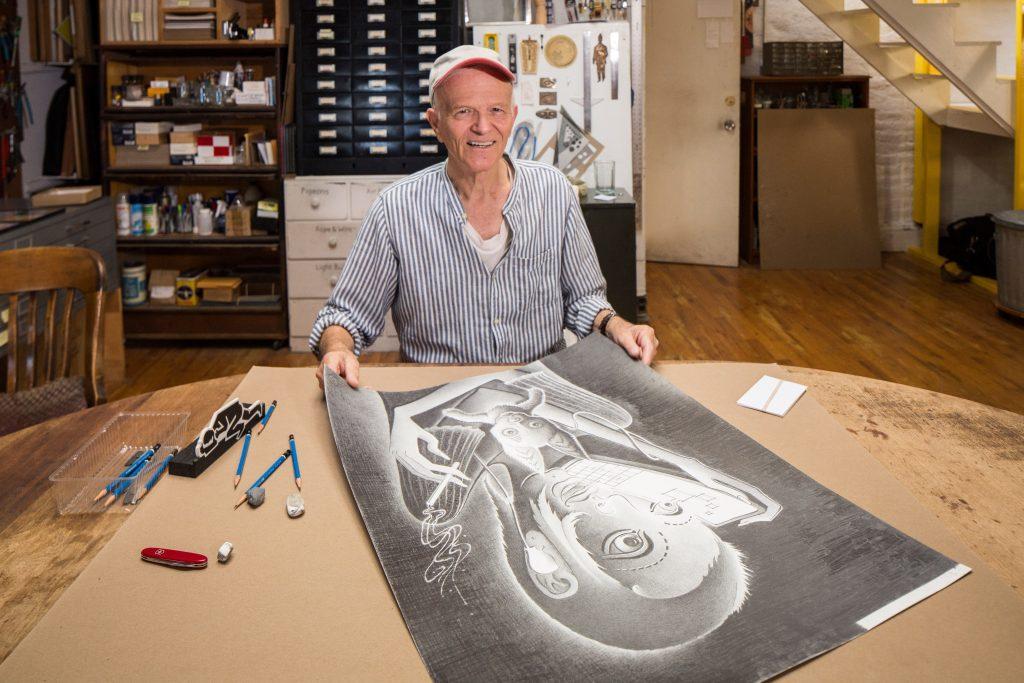 Anton van Dalen working in his studio in (2020). Photo by Anthony Lindsey.

For me, the studio is like a portable place, and it is whenever I happen to be. I always carry with me pencils, paper, and erasers—certainly when I am traveling. It’s partly like a diary of my life and the life around me.

The pigeons have been my companions since I was a child. I had a childhood that was sort of independent, so the birds became my companions, and they also became my subject of my work overtime.

Every late afternoon, I go up on my roof and bring them their food, spend some time with them, and bring fresh water. And at times when I fly them (since the weather has been so crazy, it’s not very good to do it of late), they go up in the sky and sometimes they stay up there for an hour or two and then they come back down again and then I bring them inside again. They are a variety of birds, Highflyers, that love to fly and that’s what I like about them—to see them flying high. 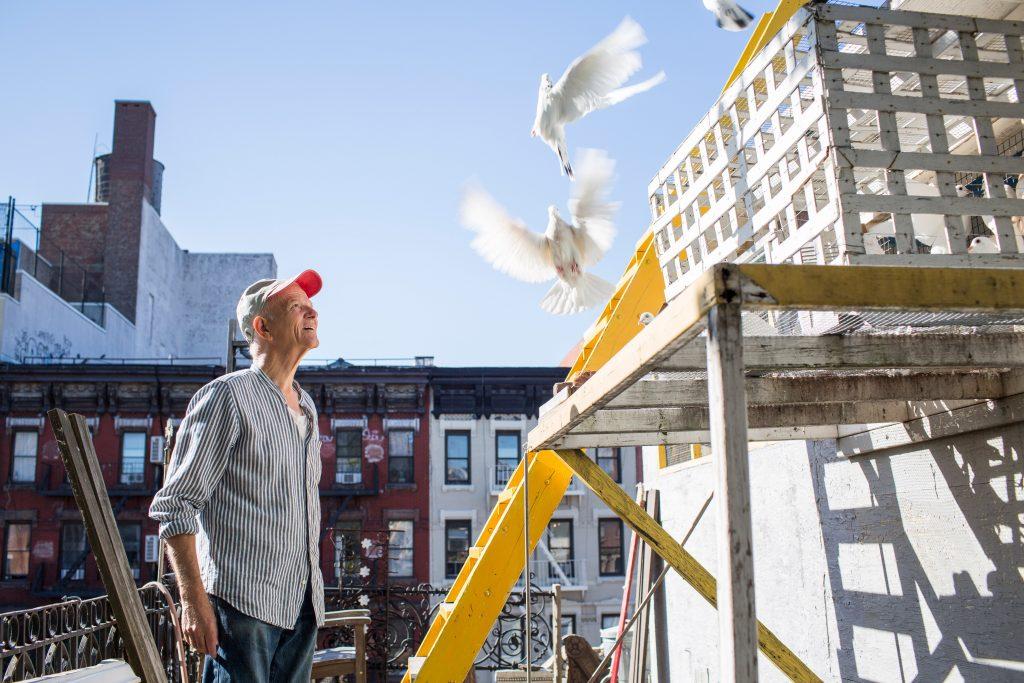 Anton van Dalen with his pigeons from the documentary (2020). Photo by Anthony Lindsey.

I think a lot of the way I work comes out of having grown up in Holland around works by Dutch artists like Rembrandt, Vermeer, and Van Gogh, who felt like their work had to be a reflection of immediate life around them. It’s directly about common life, and often matters of home or near home or around home. I grew up with all these artists and I think they still personify what I am trying to do today, which is making my art very realistic about the actual life I live and in a very direct way, bringing that into the work so that the work is a reflection, almost a diary of how I live.

Another artist I have always greatly admired is Andy Warhol, who so personified the way he lived within his community. I find that incredibly admirable about him, that he was so stubborn and true to the life he actually lived without any pretenses of otherwise. I think all of us learned a lot about him, that he didn’t crumble under the incredible social pressures against gay people, that he really stood up and used [it as] the subject of his work.

I got to see him up close a couple times because he had a studio in the same building Saul Steinberg had his. I found him (Warhol) to be very approachable and a very likable guy—very straightforward and treating everyone the same. These are the things I am interested in too. 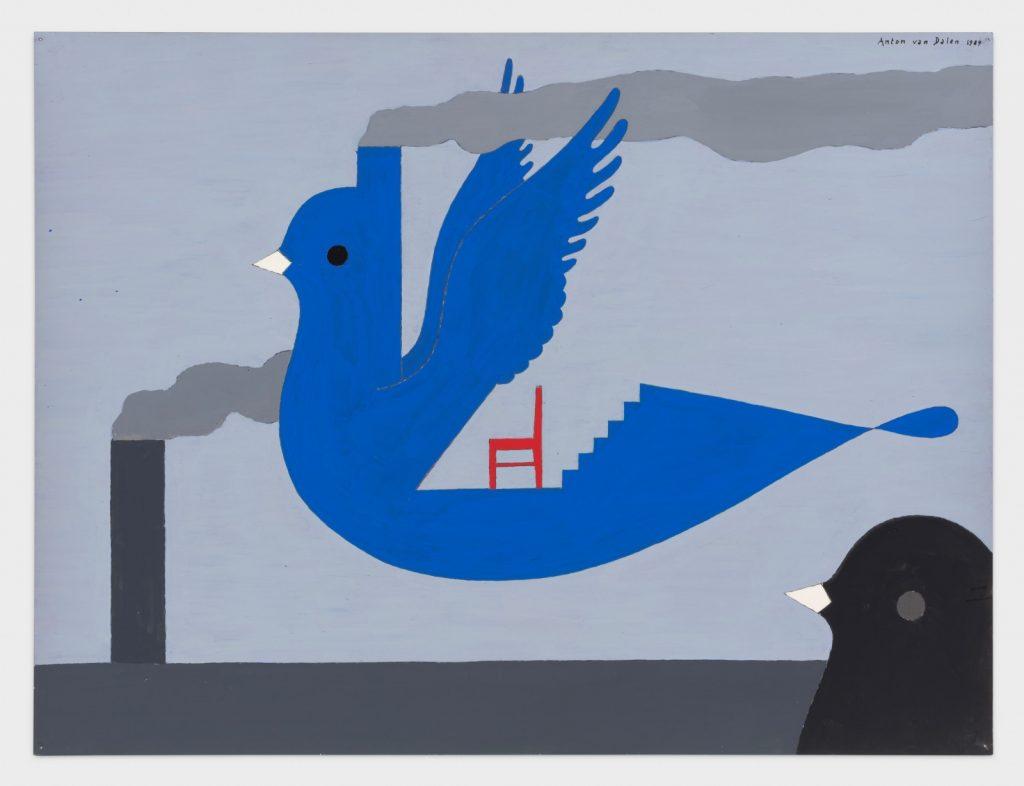 Where do you get your food from/what do you eat when you get hungry in the studio?

Living in the East Village, there is such a diversity of food and people making all different kinds of interesting things, which is what I love about the neighborhood. The area really began as an immigrant neighborhood. That still exists to this day and has kept me afloat talking to anybody and everybody. 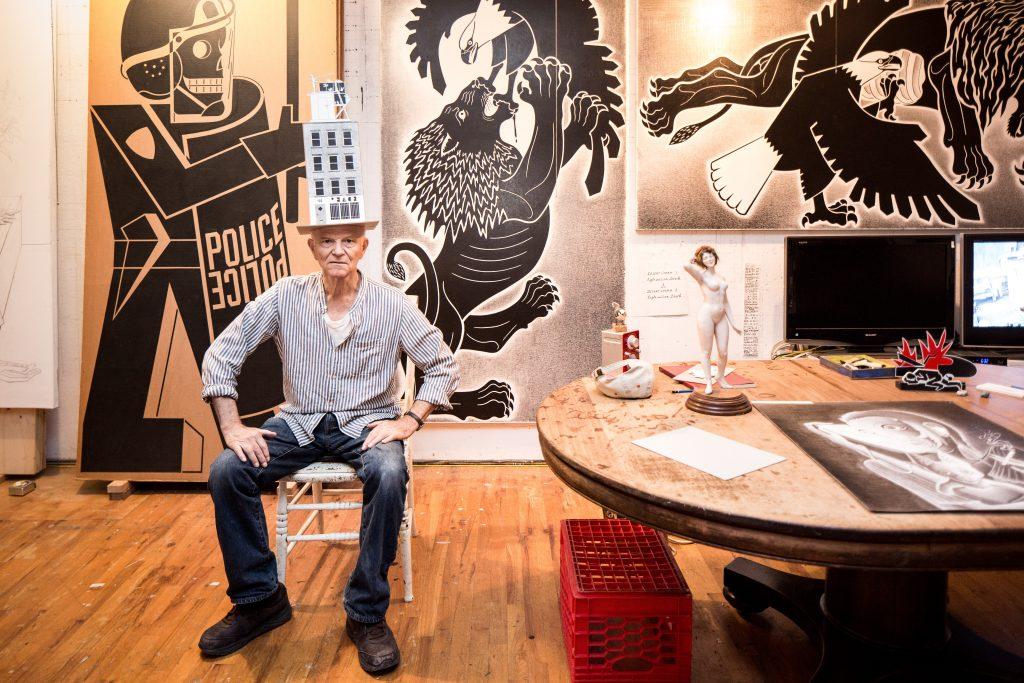 Anton van Dalen in his studio in (2020). Photo by Anthony Lindsey.

What’s the funniest thing that ever happened in your studio?

We’ve been living in this house since 1971 when my children, Jason and Marinda, were very small. I think Jason was one or two at most, Marinda was maybe four, and we lived here with my wife. One floor was for living and the other floor for working. One day, I had gone to bed as usual and, in the middle of the night, I heard this incredible noise from the floor below. I didn’t think about it very much and just went downstairs to see what was going on. I had no clothes on; I was totally naked.

The moment I came down, some guy ran across the room. It was so incredibly odd, and I called out, “What are you doing here!” He jumped out the window and was gone. Because I was half asleep, I sounded so crazy, angry mad. It was quite amazing because I would have normally been very timid and afraid but, in this moment, it was like I had become mechanical. 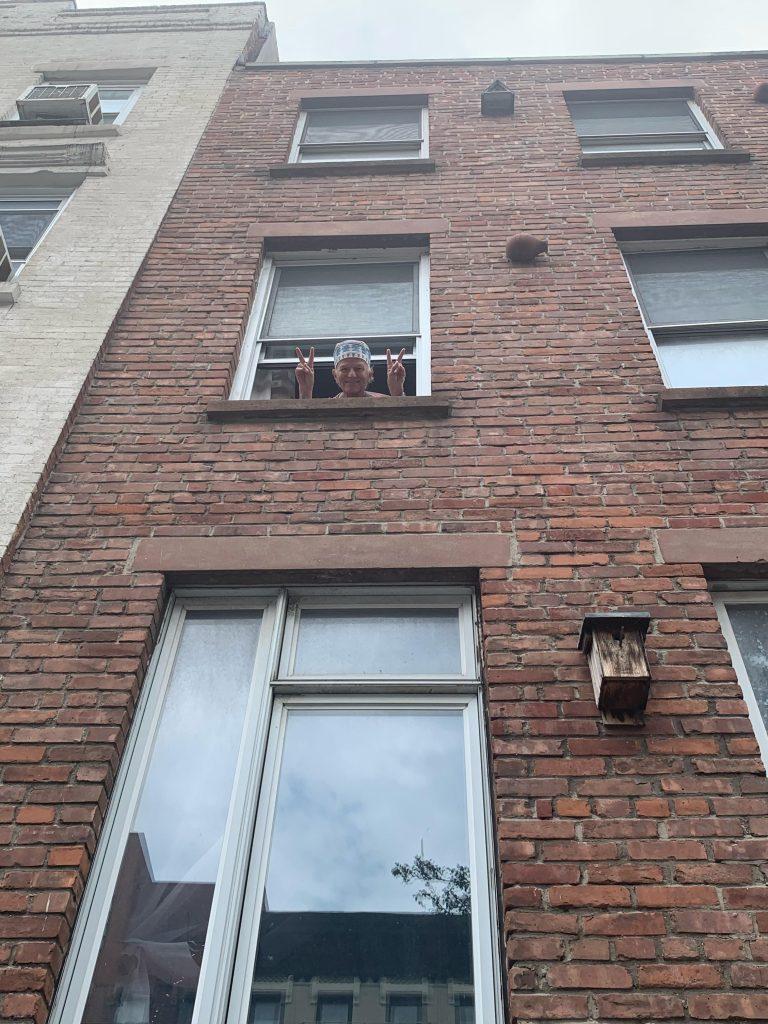 Anton van Dalen peers out the window of his East Village apartment. Photo courtesy of the artist.

Do you have a ritual around studio visits? How do you guide a visitor through your space and your work?

I welcome studio visits very much and find it very interesting. I learned very quickly that many people who are not familiar with the arts are very intimidated. I think it’s mostly about language and how to talk about it, so I tell people almost immediately, “Just tell me what you are seeing.” Usually, they are seeing exactly what I intend to be seen.

A lot of it is about lowering the intimidation a lot of people feel around art. If you calm them down and reassure them, they are actually very comfortable with looking and thinking about art. It doesn’t have to be a certain way—it’s all legitimate. I try to sort of make art, and thinking and looking at art, something that we all naturally do and can figure out in our own way. There is no one interpretation—there are many. And that’s what is wonderful about art. It’s not a biased single place. You can always kind of find yourself within it.