Home News In Germany, under a cornfield in Helfta, discovered a 1000 year old... 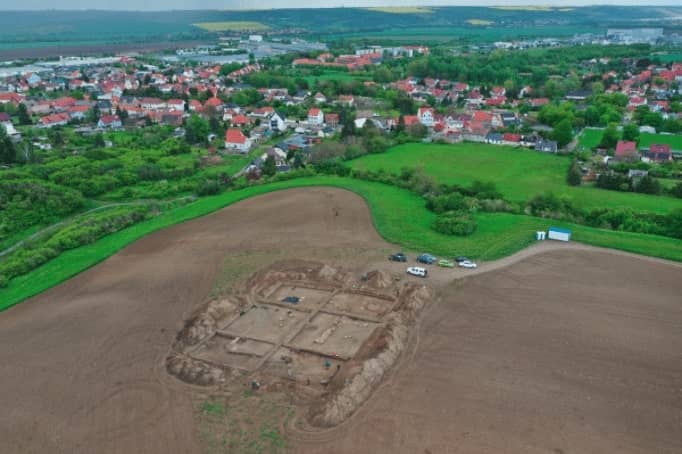 Eisleben in Saxony-Anhalt is known as the birthplace, baptism, and death of the famous Martin Luther. But recently, the city has made headlines again – during excavations in its suburb, the foundations and ruins of a large church from the second half of the 10th century were found.

According to the State Office for Monument Conservation and Archeology, the foundations of a 1,000-year-old church built by the German Emperor Otto I (also known as Otto the Great) were rediscovered by archaeologists under a cornfield in Helft, Germany, in late June in the Saxony-Anhalt region.

Built on foundations, the church was 66 feet wide and existed next to a massive cemetery containing no fewer than 70 graves. Numerous artifacts were also unearthed in the past month, including coins, utensils, jewelry. And other accessories are among the archeological finds.

The old church was built in the 10th century and has been in continuous use for 500 years, possibly even once serving as a monastery. There is evidence that Otto the Great stayed here twice, highlighting the importance of the site and the building. Archaeologists knew to look for a church because the historian of that period Titmar von Merseburg wrote about its existence.

Historians considered Otto the Great to be the first emperor of the Holy Roman Empire. After being defeated by the pagan Hungarian invaders in 955 AD. E., he became known as the protector of Christendom.

He used his self-proclaimed divine right of the ruler and his relationship with the bishops to strengthen his control over his kingdom and begin his aggressive expansion into Italy. His son Otto II succeeded him after his death in 973 CE. E.

Because Otto the Great was associated with what is now known as Catholicism, the church was demolished during the Protestant Reformation in the 16th century. Although other Christian buildings from that period have survived, it is possible that the church was treated more severely, since Martin Luther, the founder of Protestantism, was born in the nearby town of Eisleben.

The Minister-President of Saxony-Anhalt, Rainer Haseloff, said in a statement that he is particularly pleased with the sensational excavation results in Helft because it is one of his favorite places in Saxony-Anhalt. The location of the church closes an important regional historical gap.

Excavations will continue until September 2021.

Otto the Great is crowned Emperor of the Romans

King Otto the Great was a ferocious warrior and shrewd politician, he suppressed all opposition, including two uprisings of his brother Henry, who planned to kill him. He effectively intervened in French politics, subjugated the Bohemians, and facilitated the German settlement of Slavic territory east of the Elbe and Oder.

King Otto the Great defeated the Hungarian Magyars and put an end to their long-term predatory raids, kept the Danes in the north, made loyal allies to the German bishops (whom he turned into feudal lords, as well as clergy), and created something approaching the German state.

In 951, King Otto the Great invaded Italy, where the Italian lord Berengar of Ivrea seized the throne and kidnapped Adelaide, the previous king’s widow.

Otto the Great was recognized by historians as actually the first of the emperors of the Holy Roman Empire and the most powerful European ruler of his time.