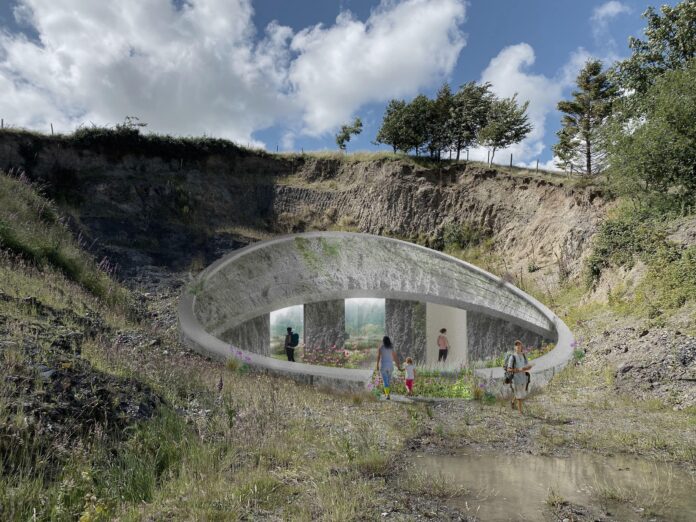 Other small-scale commissioned works by Marcus Coates, Susan Philipsz, Martin Boyce, Atelier Van Lieshout, Yelena Popova and Ryan Gander will also be shown at coastal locations from summer next year as part of the Deep Time initiative. Philipsz will develop a new work for Whitehaven Harbour—home to one of the oldest remaining coal wharves in the country—while Boyce is making a permanent piece for Silecroft Beach in southern Copeland.

The four shortlisted artists have spent time in Cumbria to develop plans for their proposed new large-scale permanent works. Eliasson aims to create an elliptical steel basin, Your Daylight Destination, that will fill twice a day with sea water following high tide. This concept was devised in collaboration with the novelist Robert Macfarlane.

“It is only from one position that visitors properly ‘see’ the artwork. This effect is achieved through anamorphosis, an old perspectival trick whereby an elongated shape appears different when viewed from a specific angle,” says Eliasson in a statement.

Whiteread plans to make a facsimile copy of an abandoned corrugated building, creating an “eerie double presence” of an existing structure. “The facsimile [titled Drigg Hut] will stay… blank and mute, battling the elements and the onslaught from the Irish sea organically becoming part of the environment. A quiet and secretive presence in the landscape,” says Whiteread in a statement.

Hiorns, in partnership with Tom Emerson of 6a architects, wants to transform a slag heap, a mound of industrial waste, at Millom on the River Duddon into a “precise sculptural form” which he calls Millom Land Form, highlighting how land art can be used to regenerate post-industrial landscapes.

“For us, the slag heap at Millom is a key cultural object. Its scale and harsh granularity is tough, both physically and emotionally, and we were keen to emphasise the qualities of this rare object: to shape it into a timeless form heading towards future mysteries,” say Hiorns and Emerson.

Oudolf meanwhile has proposed creating an immersive AI experience called SEED which involves transferring “the sights, sounds and scents” of a garden to a sunken pavilion on a disused quarry site. Designed by vPPR architects, the pavilion will also house an immersive audio-visual installation featuring recordings of Oudolf’s responses to sites on the West Cumbria coast.

The proposals will be shown in a free public exhibition opening at The Beacon Museum in Whitehaven (10 September-9 October) and the Windermere Jetty Museum (20 October-20 November). The winning proposal is due to be announced this winter following the public exhibitions.