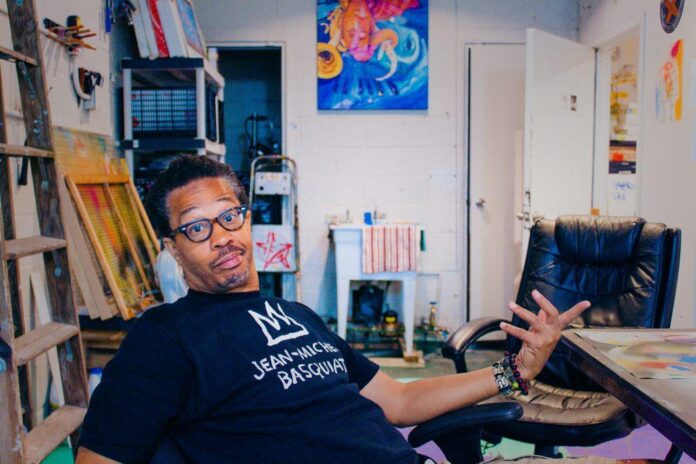 It has been 38 years, and Eric Orr still wants his t-shirt back. Featuring an early version of his signature robot cartoon, the t-shirt embodies the moment Orr broke onto New York’s art scene. The story goes something like this: In 1984, Orr was at The Roxy watching a breakdancing contest, when street artist Keith Haring strolled over to say he’d spotted the robot all over the city’s subway system. Haring asked to swap shirts and telephone numbers.

Days later, the two agreed to meet in the front train carriage at the Bleecker Street subway station and proceeded to chalk up every blank advertisement panel they spotted, from Brooklyn Bridge to 125th Street. They got kicked out of the subway, twice. But a fruitful collaborative friendship started.

It’s perhaps this association with Haring, plus Orr’s deep roots in the 1980s graffiti scene, that has seen him labeled as a street artist. In fact, the Bronx native primarily considers himself an illustrator, someone more at home creating in his Hunts Point studio than spray-painting around the city. “People ask why I don’t do more work on the street,” Orr told Artnet News, joking about the prohibitive cold of the December afternoon. “But that’s not me, I’m a design guy, I like to think up concepts.” 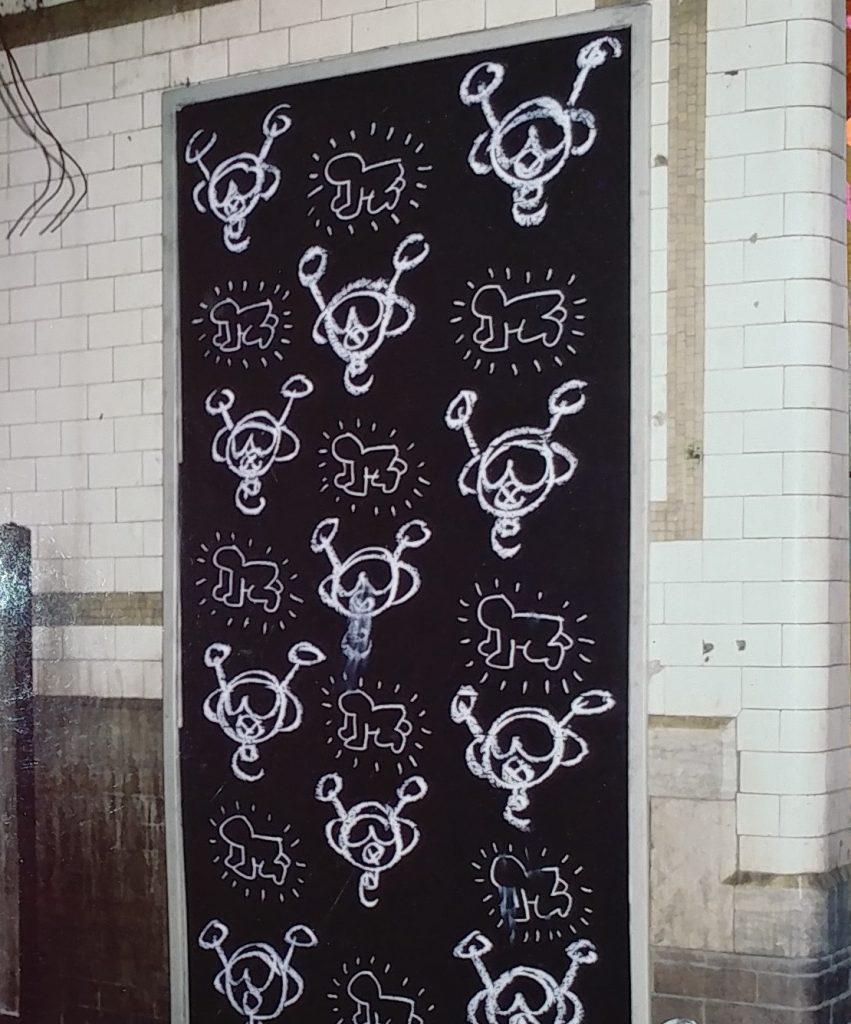 Orr’s education somewhat explains this more measured approach. He learned carpentry in high school before receiving classical training at the School of Visual Arts and the Art Students League in New York. “I grew up painting portraits, murals; I can build houses, bookshelves,” Orr noted, adding that he also once designed a vanishing-edge swimming pool for Atlanta Falcons wide receiver Michael Haynes.

His best-known work—the cartoon robot, which began as a teenage doodle—is one Orr has iterated repeatedly over the past four decades. It, too, evidences influences well beyond the world of street art, which Orr saw evolve first-hand, from straight letter-style graffiti to more figurative forms in the latter half of the 1980s. Most obviously, there’s the role of comic books. Orr and his brothers grew up collecting in the so-called Bronze Age of comics and you can see elements of Inspector Gadget in his creation’s spiraling arms, and something of early Robotman in its boxy torso.

Orr’s other major source of inspiration was music. From the Bronx’s burgeoning hip-hop sound, to Overton Loyd’s cover art for Parliament records, to the Kraftwerk tracks on radio, to the robot dance itself, “there was so much going on,” Orr said, “and I was pulling from all the facets that were in front of me.”

Combine these two elements and you arrive at Orr’s landmark creation , the world’s first hip-hop comic book, which he released in 1986 as part of his work designing logos and album covers for artists attached to Strong City Records. What makes it a hip-hop comic? It’s written in verse, the main character isn’t a superhero but a boom box carrying robot who goes to park jams, and it originates from the home of the genre, the Bronx. Essentially, the book was a complete representation of the culture—plus it had a back-page ad for Haring’s Pop Shop. 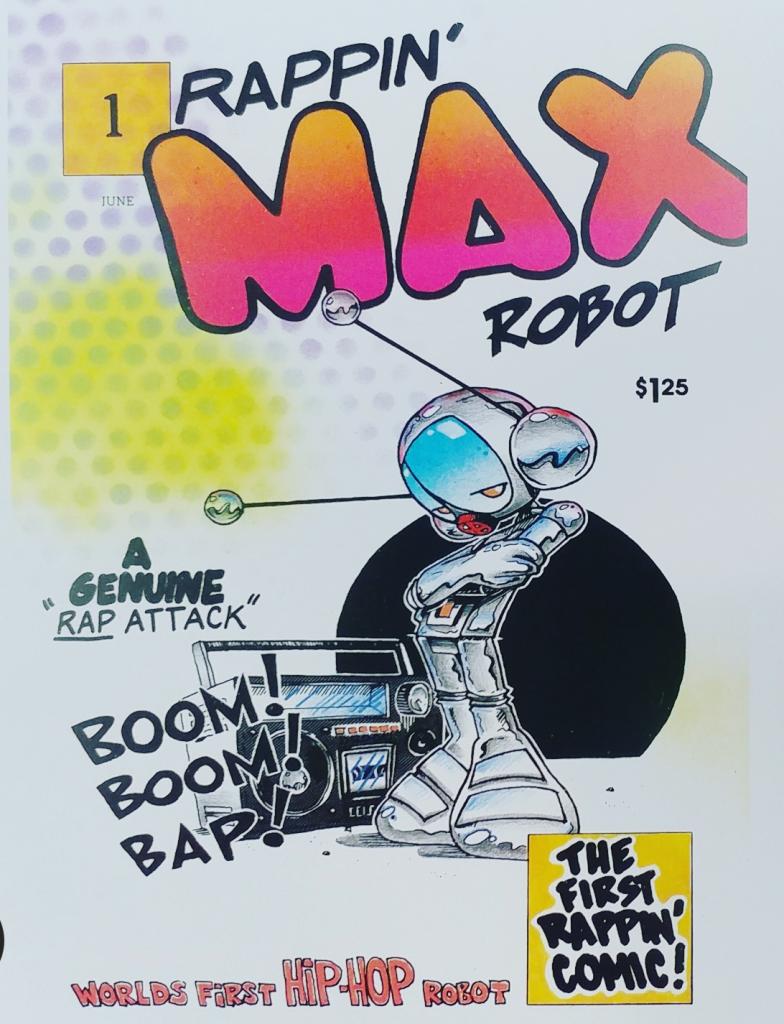 Two copies from the original edition print-run have been purchased by the rare books and manuscript libraries of Columbia and Cornell universities. A third is housed even closer to home, in the Universal Hip Hop Museum, which currently operates out of a temporary space in the concrete tangle of the Bronx Terminal Market.

Next year, the museum is set to host a series of events celebrating the 50th anniversary of Hip Hop—which comes unfortunately too soon for the opening of its 55,000 square foot permanent home, scheduled to be completed by mid-2024.

It’s a project Orr got involved with through the museum’s executive director, Rocky Bucano, a former colleague at Strong City Records. What the museum currently lacks in space, it makes up for in priceless memorabilia and storytelling. On display now is part two of a trilogy of shows tracking the rise of the Bronx-born genre, “The Revolution of Hip Hop, the Golden Era.”

Visitors enter through a bejeweled sound tunnel alive with the greatest hits from the final years of the 80s. “The exhibition is a combination of cool artifacts, immersive experiences, and great photography,” Bucano told Artnet News. “Everything is reflective of the peoples, places and spaces of the Golden Era. We want people to step back in time.” 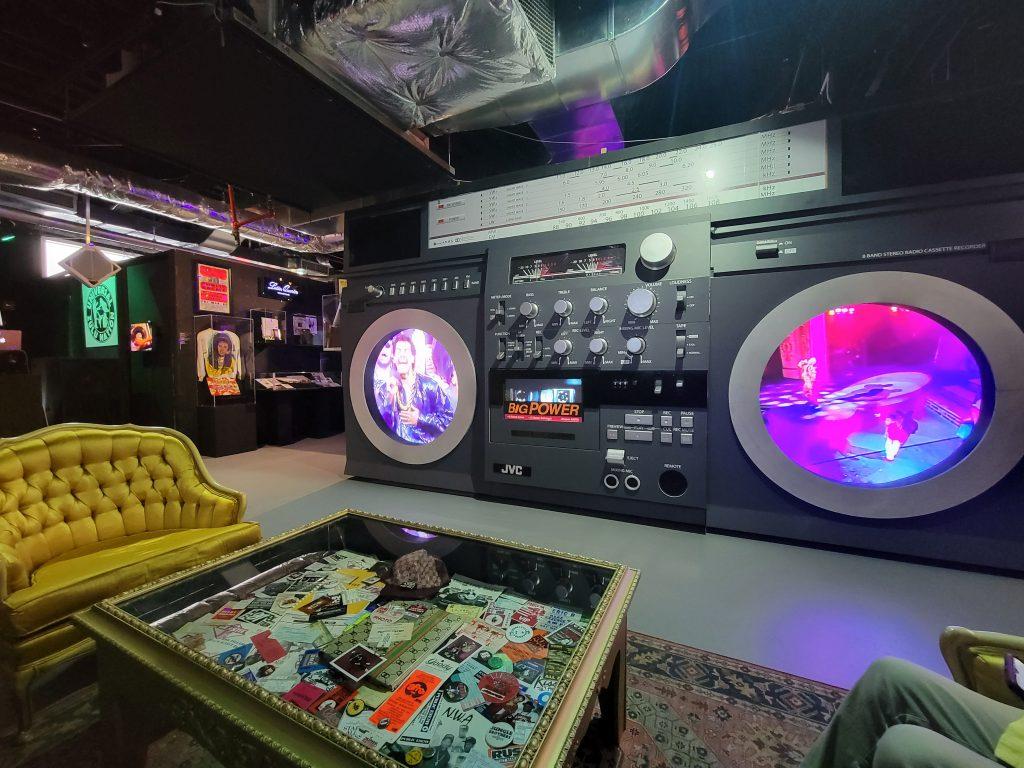 Through pinpoint artifacts, the exhibition presents a full picture of hip hop’s rise and character; its global dissemination in a wall of tapes passed around army barracks; its mainstream commercialization in a pair of original Adidas Run DMC sneakers; and its artistic stylings in a mural from Orr. All of the works are gifts to the museum, friendly loans, or canny finds. This last track for acquisitions is one the museum will pursue further in June next year, when it releases “Hip Hop Treasures,” a television show in which its curators scour garages and storage units for rare goodies.

There’s one piece of hip-hop memorabilia the museum has yet to uncover: an original Rappin’ Max Robot t-shirt. “That’s my holy grain,” Orr said.