Home News Union Workers at the Philadelphia Museum of Art Are Going on a... 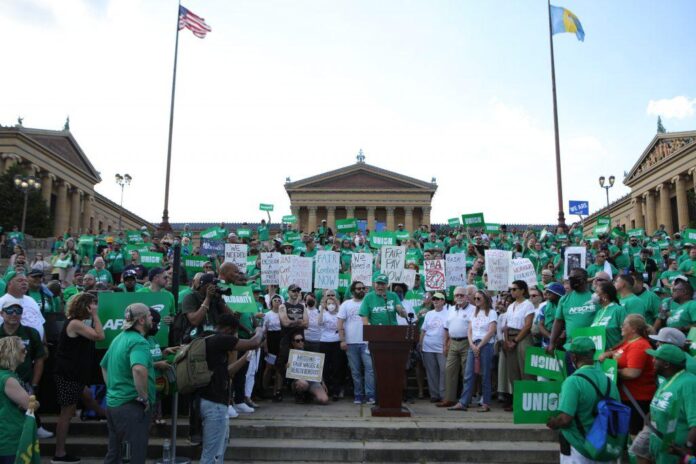 On Friday, September 16, members of the Philadelphia Museum of Art (PMA) union will go on strike for one day in what they call a “warning to museums management.” More than 150 workers across nearly all departments at the institution will be picketing in front of each of the venue’s doors.

The move marks the latest salvo in a prolonged, and often contentious, period of contract negotiations between the bargaining unit and its employer that goes back to October 2020. Health care, paid parental leave, and wage increases are among the topics that have been battled over in weekly meetings.

He explained that the workers’ group and museum management have “quite a few” tentative agreements on the table, but all of them are “non-economic.” Management has “been really resistant to making any changes to the status quo as it relates to job security,” he said.

The strike comes just three weeks after the bargaining unit filed an unfair labor practice charge with the National Labor Relations Board, alleging that the museum has “repeatedly violated federal law by engaging in union-busting activity during contract negotiations.” PMA management is represented by Morgan, Lewis & Bockius, a law firm famous for its anti-union strategies.

Since the charge was filed, negotiation sessions between the union and the museum have soured even more, Rizzo said. The stalemate prompted the workers group to organize the strike this week.

“We expect that, after we show them that we can shut the museum down…[management] will come to the table,” he said. “If they don’t, then we’ll reevaluate. We might have to escalate even more.”

That’s right. @PMA_Union is ON STRIKE tomorrow at the Philadelphia Museum of Art. Come down and join us on the picket line.

“The museum remains open to the public and is committed to serving our community,” a spokesperson for the institution said in a statement to Artnet News. “The museum has devoted significant time and energy to the negotiations, and we have made considerable progress, reaching agreement on more than 25 substantive issues. We are disappointed that the union has chosen to strike, but we remain focused on reaching a fair and appropriate contract with the union.”

Eighty-nine percent of PMA workers opted to unionize in August of 2020. The vote, which was held just two days after the institution laid off 25 percent of its staff, established the first wall-to-wall union at a museum in the country.

“Just as we respected the right of staff to organize at the outset, we also respect today’s outcome,” Timothy Rub, the PMA’s former director and CEO, said in a statement at the time. “We pledge to work in good faith to achieve the best outcome for our staff and for this institution.”

In the months and years that followed, negotiations stalled.

“Museum management needs to stop union-busting and make serious offers that improve workers’ wages, healthcare, and parental leave,” said Cathy Scott, president of the American Federation of State, County, and Municipal Employees (AFSCME) District Council 47, to which the PMA union belongs. “We cannot accept a status quo that subjects workers to violations of federal law, wages well below the national average for art museums, and benefits that do not allow workers to support their families.”

In January of this year, Rub resigned from his position as director and CEO. His final two years were a tumultuous period at the museum colored by sexual harassment scandals, staff cuts, and the completion of a monumental Frank Gehry-designed expansion project.

Sasha Suda, the former director and chief executive of the National Gallery of Canada, was named Rub’s succesor this summer. She will begin her new role later this month, taking over just as the museum prepares to open a major Henri Matisse exhibition.

“This moment is a key turning point for the museum—and perhaps an opportunity for them to re-evaluate their position on a lot of things,” Rizzo said. “They should feel some pressure right now, and I’m hopeful they will come to the table in good faith and bargain with us. It’s been too long.”

For the Final Phase of Its Campus-Wide Renovation, the Hirshhorn Has Selected the Architects for Its First Interior Overhaul in Nearly 50 Years