Home News Artist Marco Fusinato on What It’s Like to Play a Punk Gig... You could hear the deep droning hum even before the black granite block that housed the Australian pavilion came into view, and feel the vibrations as you approached it in the Giardini at the Venice Biennale. Inside, those who braved it past the threshold were bombarded with a wall of amps, a giant floor-to-ceiling LED screen, a cacophony of black-and-white images, and abrasive Noise-metal and feedback.

When I visited the pavilion during the Biennale’s opening in April, the soundscape was so massive, the deluge of images so disorienting, that it was easy to miss the man sitting on a road case, next to the row of amps, with his back to the room. But Marco Fusinato, the artist and musician behind the work DESASTRES, was almost always there—playing a sleek, EGC aluminum guitar and effect pedals every day of the Biennale’s 200-day run. 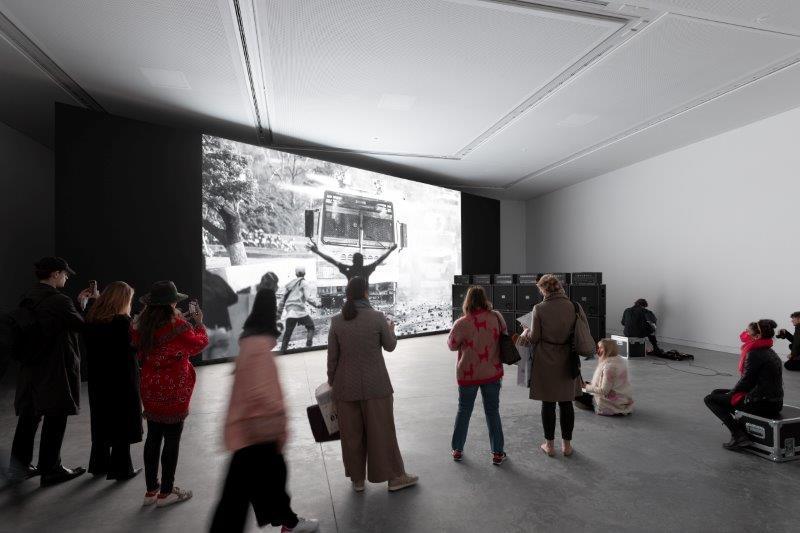 Sometimes the pavilion was full of viewers who succumbed to the meditative qualities this overpowering sensory experience could offer, and sat down to let the work wash over them for hours. And sometimes Fusinato was there alone, playing at deafening volumes as the images on the monumental screen would come and go, washing the pavilion with light, then infusing it with darkness.

“It’s very divisive. Either you love it or you hate it. There’s not much in between,” Fusinato told Artnet News during an interview between live music sessions. He was nearly an hour late to our conversation but the energy inside the pavilion was so ecstatic that he told us he had lost track of time. The improvised sound emanating from the amps triggered an AI system that spat out images from the artist’s personal archive and at that point, it was “just right,” he said, so he “went down that path.”

The interplay of the sound with the technology that randomized the images—what Fusinato calls the “Score”—and the energy inside the space was never the same. “I’m always searching for something that I can’t quantify; it’s a feeling. And then you might find it and you sit on it for a while. It can take you places,” he said.

A Punk Gig Without a Stage

The 59th Venice Biennale came to a close on November 27, and it is often the case that national pavilions schedule live performances, talks, or other public-engagement programs during the final week, as La Serenissima once again fills with art professionals and visitors rushing to view one of the artworld’s most important exhibitions before it closes. But Fusinato had been putting on a unique live event day-in-and-day-out for seven months, at times conjuring a high-intensity concentration of raw energy that is nothing short of life affirming.

And that, in spite of the fact that DESASTRES, which evokes Francisco Goya’s suite of etchings Los Desastres de la Guerra (1810-20), doesn’t exactly uplift. The images in Fusinato’s archive, amassed during Australia’s long lockdowns, are as discordant as his doom and death metal references. They range from found news images of civil protests, war, and manmade disasters, to historical illustrations of torture and bloodletting, among many other motifs, some less identifiable.

“DESASTRES is a monster,” Alexie Glass-Kantor, the pavilion’s curator, said in her opening address. “A banquet of images that range from the benign to the blatant, absurd, twisted, sublime, bone-crushing, and tense.”

The images’ sequence and combinations might have been confounding, but they clearly speak of our endless capacity for violence and destruction. And in the 200-days since Fusinato first switched on the amps, disasters and war continued to rage around the world, their digital images popping up on our personal screens. 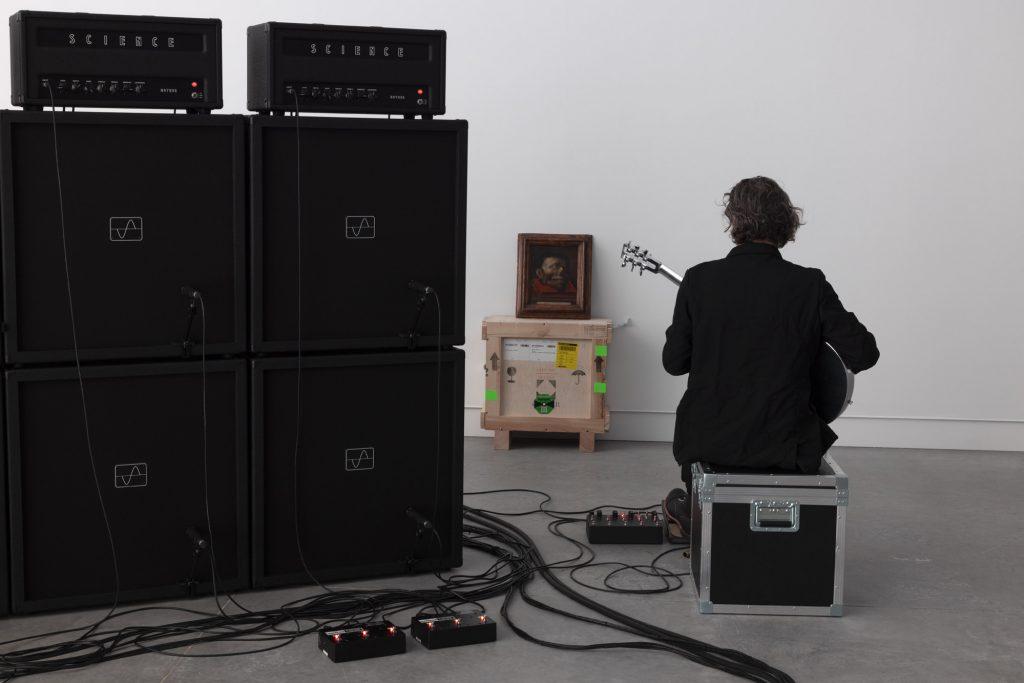 The audience could walk around the amps and LED monitor, cables and wires exposed, and get behind the huge screen, where the connections between the panels flickered in a hypnotizing sequence of red and green. The only other element of color in the space was a small 400-year-old painting of a decapitated head placed neatly on a red book. The artist found this memento mori at auction while searching for images online and felt compelled to buy it. It was the pavilion’s “mascot” as he put it, and he moved it around in the space every day.

For Fusinato, the work’s openness allowed visitors to bring their own experiences into it. “There are many elements coming together here: the aesthetics of noise, music and time, underground subgenres, extreme music, and decayed imagery,” he said. “Some people may have never experienced volume at this level or that kind of noise concert, which has a very particular aesthetic and philosophical code.” But whether a viewer could recognize such codes is secondary to its cathartic effect, he pointed out. “It’s an attitude.”

Some found this collusion of the elements of spectacle confusing, and would get too close to the artist. “They treat me like a marble sculpture! I have to tell them to fuck off,” he said.

“It’s a bit like a punk gig and, essentially, when they walk into the pavilion they’re walking onto a stage, but in this context, it’s really like we’re all on the same platform, so that’s been something to constantly negotiate,” he added.

Born in Melbourne in 1964, Fusinato’s roots are here in the Veneto region, where his parents emigrated from, and he considers the steadily disappearing local dialect of the Belluno province his first language. “I’m here representing Australia, but I also have an Italian passport and I feel like I don’t belong in either. I’m here making work. I can’t take on the baggage and absurdity of any form of nationalism,” he said.

During the long months in the Giardini, as audiences came and went and a new far-right Italian government came to power, Fusinato found a community in the guards, cleaners, and invigilators—the workers meant to go unnoticed. “I really wanted to create that kind of environment that’s welcoming and in the same spirit as the work,” he said. (It also helps that the Australian pavilion is one of the few with a kitchen and bathroom.)

Clocking in eight hours a day in the pavilion proved to be a unique luxury that brought certain things into focus. “It’s been very much about labor and occupying space. What’s been eliminated is administration, Zoom meetings, and all this kind of stuff that so much of our time is given over to. It’s been so liberating to prioritize that instead of all that other kind of drag,” he said.

Fusinato didn’t want to abandon this feeling and let this emphasis fade away when the pavilion closed and life went on. He is making plans to funnel the electrifying impressions that he had accumulated in the past months into a live situation for a large audience. “This project originally began with a drummer who plays in death metal grindcore bands,” he explained, but the idea that the drumming would trigger the images was abandoned along the way.

Now, Fusinato is thinking of pursuing it in a future show or music gig. But the intimacy inside the space and the intensity of the moments in which Fusinato’s guitar fed on the audience’s palpable energy will remain a unique experience, like a legendary concert. You were either there or you weren’t.