Home News Why are so many African art fairs dominated by non-African dealers? 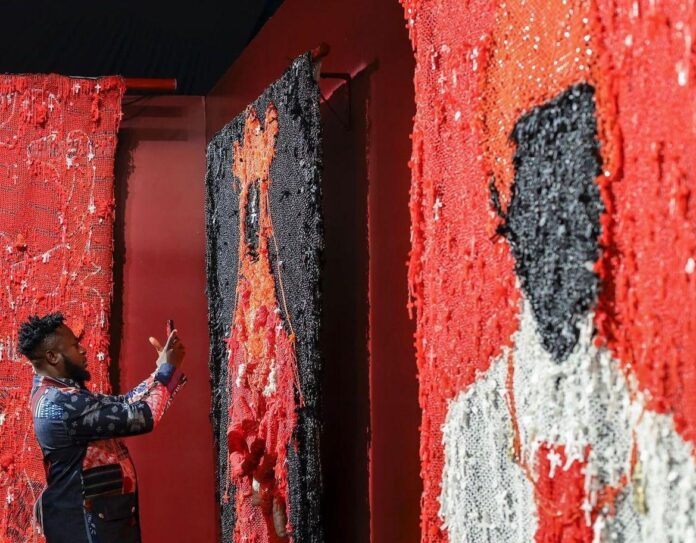 The Lagos art scene was buzzing earlier this month as it hosted the seventh edition of its annual international art fair, Art X Lagos, which took place from 4 to 6 November and digitally on Artsy until 10 November. This year’s edition, the fair’s largest to date, featured 31 galleries from over 40 countries exhibiting over 120 artists.

Founded in 2016 by the Nigerian entrepreneur Tokini Peterside-Schwebig, Art X Lagos has developed into both West Africa’s leading commercial art event, and a yearly creative hub for the entire African art world. Not by chance, it has coincided with a boom in the global interest of contemporary African art and has successfully caught the attention of the wider—Western—art world. The first of its kind, assumptions now abound that more fairs of this standard will soon sprout up across the continent.

Earlier this year, I moved from London to Lagos to begin working for a Lagos-based art gallery. This enabled me, for the first time, to physically attend Art X Lagos after many years of observing it from afar. From the moment I stepped inside, it became clear how vital it is for the Black African art community to have a homegrown platform committed to celebrating its own history. For decades, Black African experiences have been shared through a colonial, and at times regressive, lens and the fair felt like a tangible reclamation of power and authorship.

I compared this sentiment with those I felt last month, when I had the pleasure of visiting two other leading fairs devoted to contemporary art from the African continent: 1-54 Contemporary African Art Fair in London and AKKA in Paris. While art from the African continent does not necessarily mean Black art, it does largely pertain to Black artists. Yet despite the vast majority of artists exhibited at both fairs being of Black African descent, this demographic was not reflected in the gallerists representing these artists, nor in the key staff working at the fairs, most of whom were white.

This brought to the fore some pressing concerns that are often discussed among my peers in the Black art community. Yes, the market might be booming and Black artists finally have the opportunity to share their stories, history and culture—but who is actually benefiting off this success? Although there seems to be a general consensus that white dealers selling Black African art is not unethical, there are still multiple threads to pull at here. For example, at both 1-54 and AKKA, it was at times extremely uncomfortable to listen to and interact with white gallerists about issues the art on display was referencing, such as Black woman’s hair, the perception of Black skin in different regions, and other complexities that surround conversations about racism.

Explaining why we see so many Black African artists at non-Black owned galleries, Majid Biggar, the lead curator at the Lagos gallery SMO Contemporary Art, says: “With the surge in demand for works by Black artists, more international galleries have been offering opportunities to young African artists often times at the cost of the organic growth of their careers.” But he warns that what they potentially gain in international exposure, “they risk losing full ownership and autonomy of their art career and works.”

Indeed, it seems that a lot of the international galleries are not committed to these artists long term or interested in their overall development as an artist. This success is often not sustainable either. So many of African artists are now under the impression that because a work sold once for X amount at an international art fair or an auction, they can demand these prices from their local clientele. They, and their galleries, have failed to understand that a solid career is built upon a solid foundation.

“Even as Black artists enjoy growing acclaim, their representation continues to be promoted and interpreted through the lens of their white counterparts,” says Sunshine Alaible, a manager and lead curator at O’DA Art Gallery in Lagos. According to Alaible, it is not so much the representation of Black artists by non-Black gallerists that is worrying—it’s “the small ecosystem of Black African gallery owners and dealers”.

What we fail to accept is that Black art, although not always on the surface, is a representation of the Black experience. The 2020 Black Lives Matter protests did much to further this conversation, and saw major art institutions and directors pledge to diversify their staff, exhibition programmes and permanent collections. But in order for the art world to become more proactive and less reactive, we need to ensure these promises are seen through.

Successful Black artists and Black-owned or -run galleries are still relatively new within our industry, and so more established galleries—which are predominantly white-run—are still leading important conversations and dominating the representation of Black artists. The situation becomes more charged when it is clear that the same white-run galleries do not even attempt to hire Black members of staff or create working environments that reflect the artists they wish to represent and support. It is paramount that art industry professionals understand that these conversations are taking place within our communities. And it is worth putting pressure on the African art fairs to look at the diversity not just of the artists shown, but among the galleries showing them.

Morenike Adeagbo is a British-Nigerian art gallery professional from London, now based in Lagos