Home News Artist Maria Lassnig Agonized Over Her Ambivalence Toward Marriage and Motherhood. A... 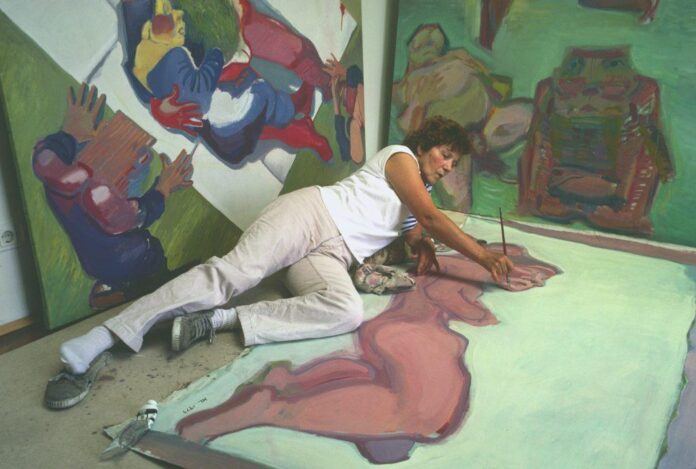 At the age of nearly 80, Maria Lassnig returned to her “missed” opportunities for a bourgeois marriage and family life and took stock of this in a series of paintings, not coincidentally titled “Illusion of the Missed Marriages” () and “Illusion of the Missed Motherhood” (). Although Lassnig felt the yearning for the security of a family and marriage, she also knew that this longing couldn’t have been fulfilled: “The picture is titled the illusion, you see? I know it wouldn’t have worked out, even with Louis, with the Frenchman.” 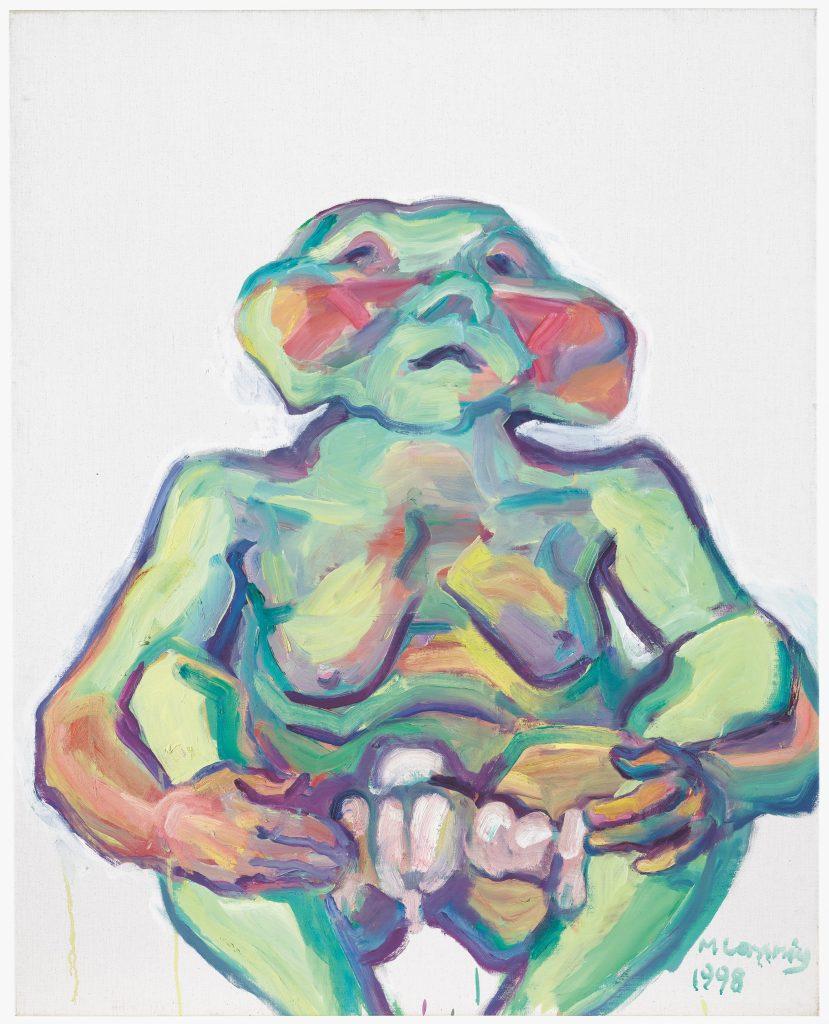 Like all the images in the series, is a self-portrait. A greenish, naked Lassnig squats there with her knees drawn up and her thighs spread open. As with a birth, the indication of a grotesquely deformed baby protrudes from her loins. She reaches out with her fingers, as if she wants to stuff the baby back into herself the next moment. She wouldn’t have dared to undertake the role of mother: “I know for a fact that I would have been a bad mother. Now, of course, at my grandmotherly age, I would be a very nice grandmother.” And: “But children and painting: that would have been impossible, especially because I always want to do everything perfectly.”

Sometimes she thought about what the children with this or that man would have looked like. Asked whether such thoughts made her sad, she answered, “Well, at weak times yes, in strong times no.” At the age of 85, she would have found it thrilling to introduce children to the world and its words: “When you have children, you have to explain every word to them, which is good for your use of language: Granny, what does ‘gay’ mean?” 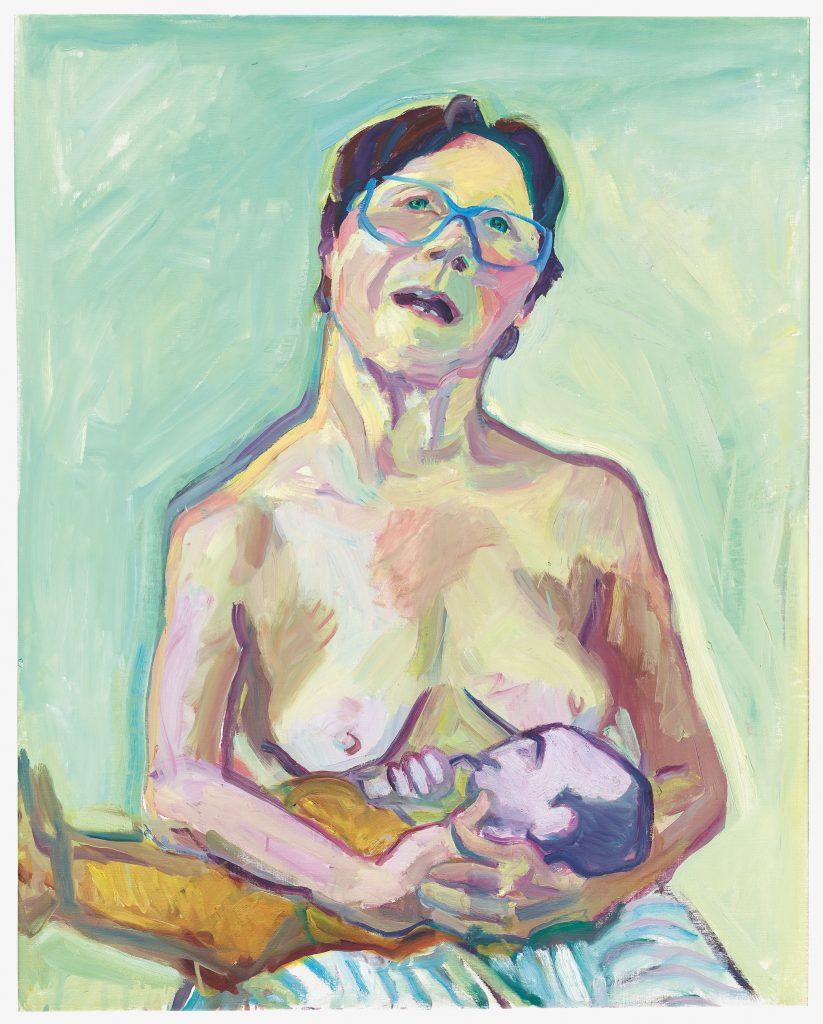 shows an elderly Lassnig with glasses, a bare torso, and a baby in her arms. She isn’t breast-feeding the child; it is just lying there, while Lassnig gazes upward with her mouth open, perhaps yearning. The baby is actually a grown man who needs to be mothered. It is not [her friend Louis] Popelin whom she cradles like a baby on her lap but Sergeant Frank Philips, one of the British soldiers who invaded Klagenfurt on May 8, 1945, and freed the city from Nazi rule. Another love story, another marriage proposal. Fifty years later, this potential missed marriage was also considered an illusion—yet her thoughts kept revolving around him, as journal entries made clear, from her years in
France in the 1960s to old age.

Like most of the men she fell in love with, she portrayed Philips several times. Another image from the series, from 1998, shows Lassnig lifting up a casually stretched man, who is smoking. She almost seems to collapse under his weight. Men are exhausting. With much irony and humor, she not only confronted her own yearnings, which she considered illusory but also the needy men she felt she had to nurture, nourish, and care for like babies. 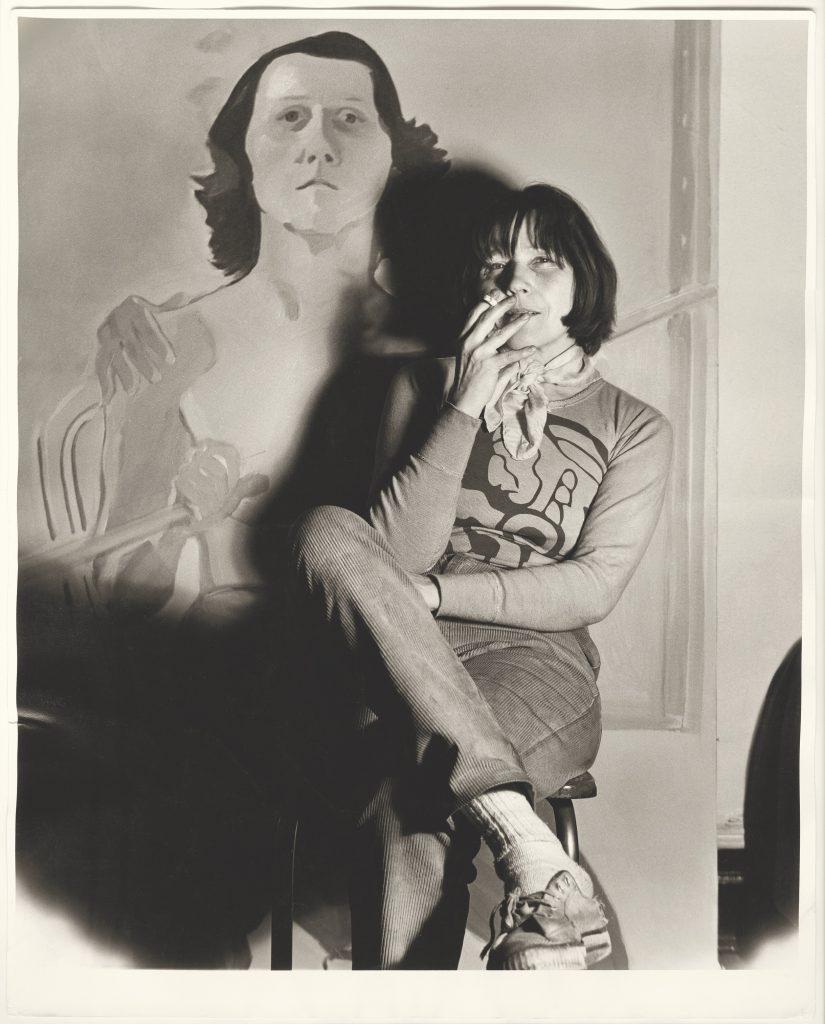 Even though at the age of 80 she knew it was about illusions, she would never be so hard-nosed as to deny her yearnings: “I am moved to tears when a child caresses me or a cat snuggles with me, and I’m so sorry for every kiss I did not give.” Although she made fun of herself and the men in the illusion paintings, she also saw these works as a kind of homage to her former marriage candidates. “As I often spend ‘idle hours,’” she laughed, “thinking about how it could have been different, maybe I also have a bad conscience towards those men who would have wanted to marry me and I did not want to and so on. To make it up to them afterward, you know?” Another time she said she did not mourn the men who spurned her but the ones she gave walking papers. These are the ones she especially loved without their knowing: “My real sadness is for them.”

Lassnig remained friends with Popelin her entire life. When she traveled to Paris on a scholarship in the early 1950s, she contacted him, and when she lived in Paris in the 1960s, they strolled together through the famous Parisian antique markets. He came to her exhibition opening at the Centre Pompidou in 1995, as well as to Nantes in 1999, where the two almost octogenarians giggled and held hands like teenagers.

Lassnig never married. Art always came first. How ambivalent the situation was for her though is illustrated by a letter to her mother: “Concerning my extreme complexity, which tortures me and which will never let me take the simple path (that of the good marriage) beyond this I am always guided by a wise instinct, of which I still do not know whether it leads me to the highest peaks of art, into a good marriage or whether it lets me stay with you. Whatever happens, I want to make you a famous mother.”