Home News Food for Thought: 7 High-Concept Artworks That Were Made to Be Eaten... 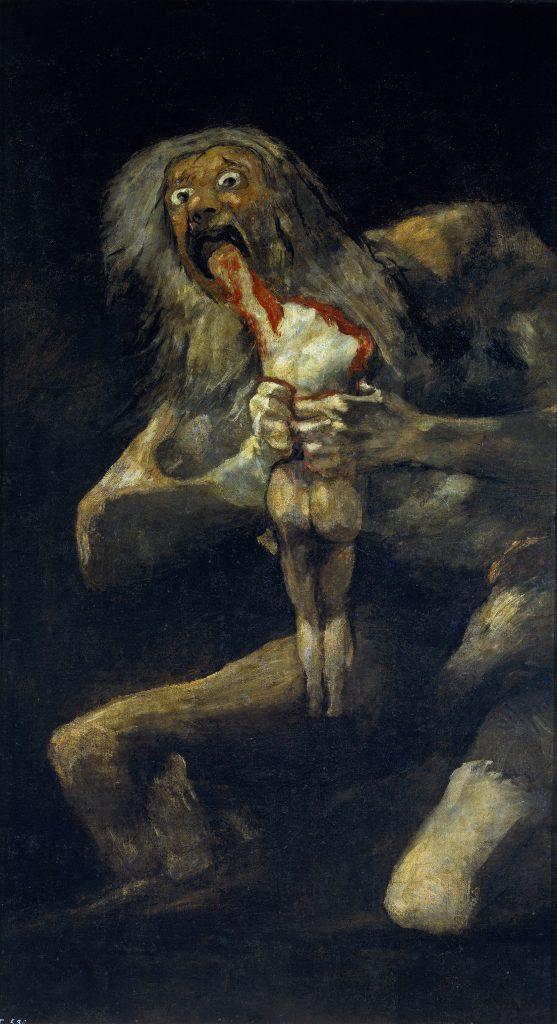 “Don’t touch!” is a common if not expected refrain when viewing art, but some works are not only meant to be touched—but eaten. Food has been a point of artistic inspiration for millennia—from ancient pottery depicting bread-making to Roman mosaics of banquet foods to Dutch Golden Age still lifes full of lavish, then-exotic fruits. It makes sense, as regardless of time or place, food is necessary for all humans to sustain life. And though depictions of food stuffs is a tradition that carries an immense history, consumable, edible art is actually a fairly recent phenomenon.

The 20th-century saw the advent of art you can eat, and the 1960s specifically heralded its standing as a legitimate artistic form. Artists like Daniel Spoerri saw the culinary world as an extension of his practice, and Allan Kaprow debuted his first “happenings,” many of which told viewers to “eat up” instead of “don’t touch.”

While food itself can contain numerous symbolic references and connotations, eating too engages with a wide range of social, cultural, and conceptual themes and ideas. Although eating the art (which, to note, you should never do without express permission) often means it is ephemeral, many works have been revived through subsequent iterations, carrying their message and the experience to new audiences.

This holiday season—like so many before—most have or will gather with friends and family to share a sumptuous meal. To help celebrate all these holiday meals, we’ve assembled a short list of seven artworks that were made to be eaten. 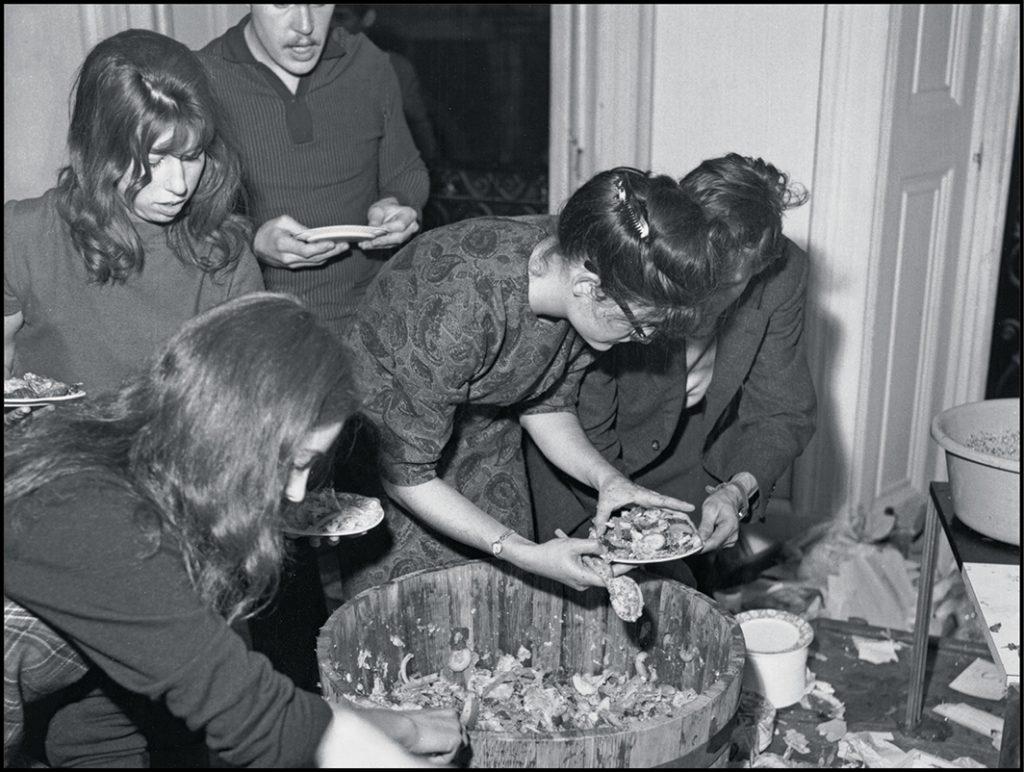 Alison Knowles, (1962), at the Institute of Contemporary Arts, London.

Multidisciplinary artist Alison Knowles was an active participant of Fluxus—an international art movement defined largely by its emphasis on process over object—and of the vibrant and experimental New York art scene of the 1960s. In 1962, she performed one of her most notable works, , at the Institute of Contemporary Arts in London. In the piece, Knowles chopped vegetables to live music, dramatically tossed them in the air, and, once mixed into a salad, served it to the audience in equal portions. The work was revolutionary in its time, as it brought fresh, green food and the quotidian act of eating into the gallery space. has subsequently been performed over a dozen times worldwide. 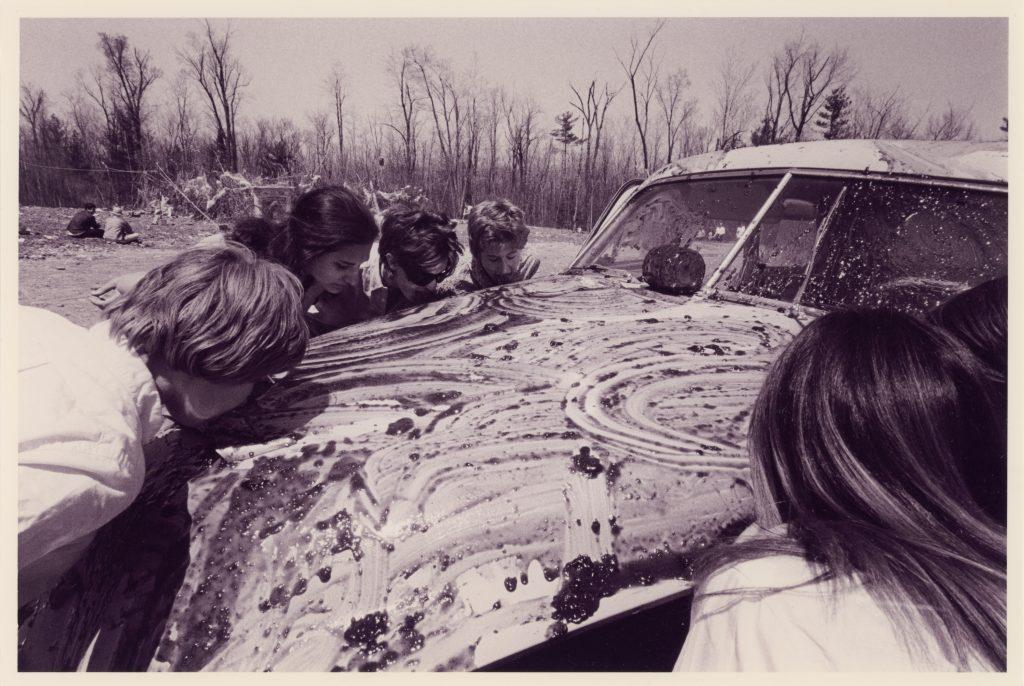 Though “happening” is a common and recognizable term in contemporary art discourse, it is lesser known that it was coined by American artist Allan Kaprow—another artist associated with Fluxus—in the 1950s. Of the numerous happenings Kaprow staged throughout his career, which nearly always involved audience participation, many also included the act of eating. One of the earliest food-related happenings was (1964), which saw visitors enter caves in the Bronx to find, eat, and drink various foods prepared therein. The photo of Kaprow’s of the same year has become one of the most iconic of his oeuvre. A multi-part happening, the work involved covering a wrecked car with fruit jam, and some participants wiped up the jam with bread and ate it, while others licked the jam up directly from the car. 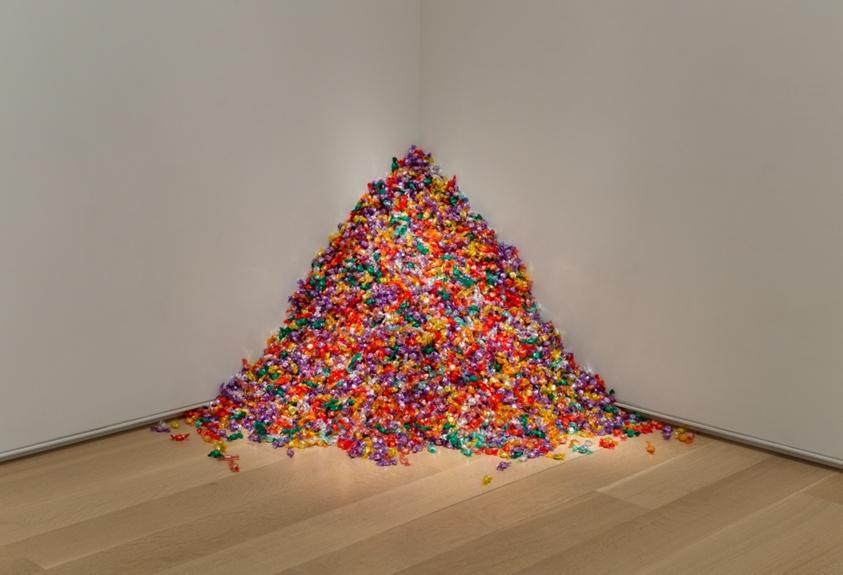 Using everyday objects to make contemplative, Minimalist sculptures, Felix Gonzalez-Torres created works informed by a range of pertinent themes, such as grief, identity, and politics. As an openly gay man working the 1980s and ’90s, gender and sexuality also played a pivotal role in his practice. One of Gonzalez-Torres’ most beloved works is (1991), comprised of 175 pounds of bright, individually wrapped candy that is typically displayed in a corner of the gallery. Over the course of the exhibition, visitors can take and eat a piece of candy, which diminishes the work both in form and from its “ideal” starting weight, until nothing is left. The title of the work refers to Gonzalez-Torres’ partner Ross Laycook, who died from complications of AIDS in 1991—as did the artist in 1996. The work is an empathetic and allegorical portrait of Laycook that engages with ideas of love, loss, and hope. 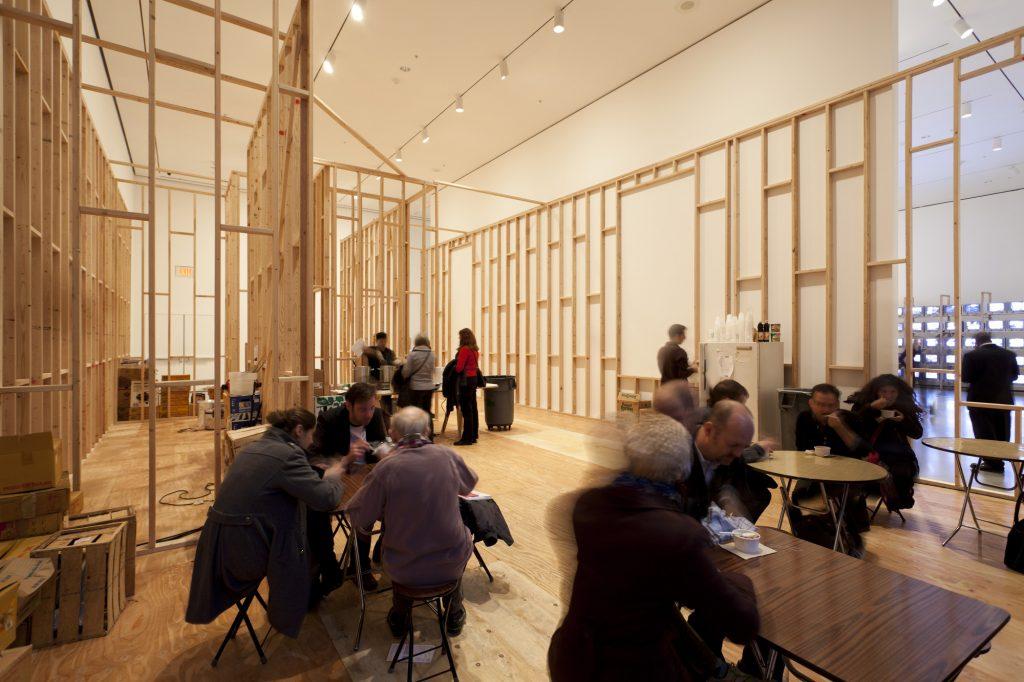 First exhibited at 303 Gallery in New York in 1992, Rirkrit Tiravanija’s saw the contents of the gallery’s back rooms and offices moved into the exhibition space, and the then emptied rooms made into a temporary kitchen. From this kitchen, the artist cooked and served Thai vegetable curry, which he offered for free to any visitors who wanted some. The work invited visitors to engage with rather than purely observe the art, while fostering connection and communication between those present. has been restaged numerous times since and is currently in the collection of the Museum of Modern Art in New York, where it has the possibility to be reactivated with food made in the museum’s own kitchen. 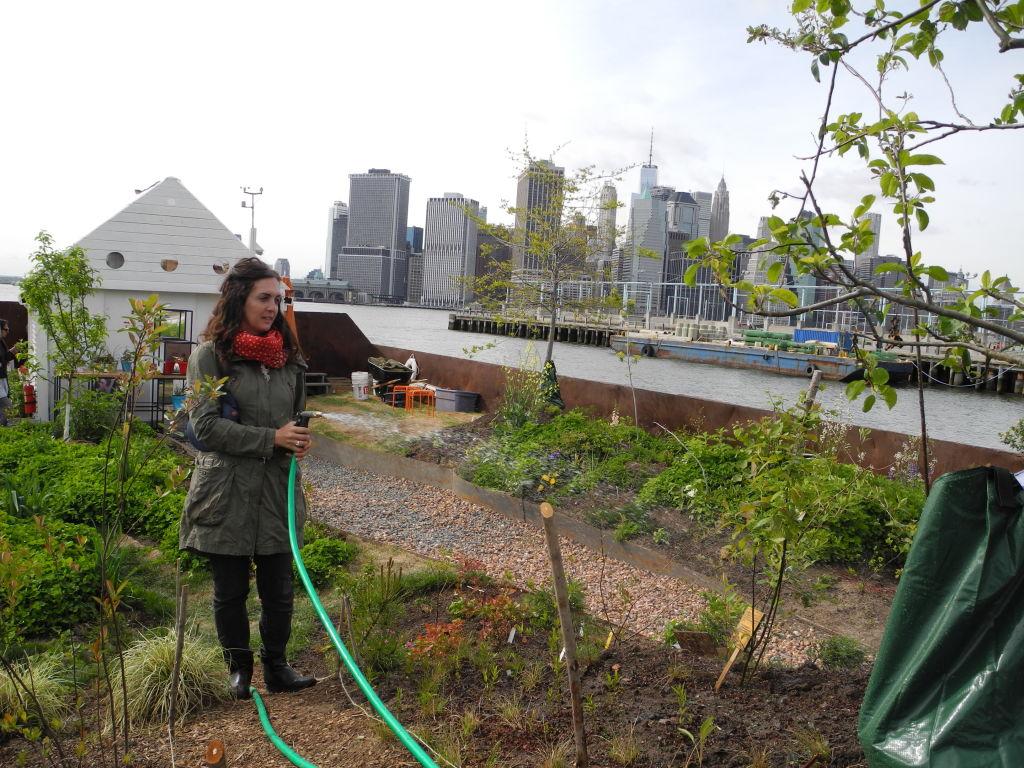 For over a century, New York has maintained strict regulations against growing or foraging food on public land to deter any potential ecological destruction. Artist Mary Mattingly, however, found a way to evade these restrictions via marine common law. In 2016, the first iteration of launched as an edible landscape situated on a reclaimed barge. The wide variety of plants the ship carried could be harvested and eaten for free, situating the work as public art as well as a public service. , the “floating food forest,” travelled to public piers in New York City offering fruits, vegetables, and herbs grown on board through 2020 when it had to close. Currently, the project is in a new phase that aims to build a more permanent structure, with the aim to redefine and promote community-based food production. 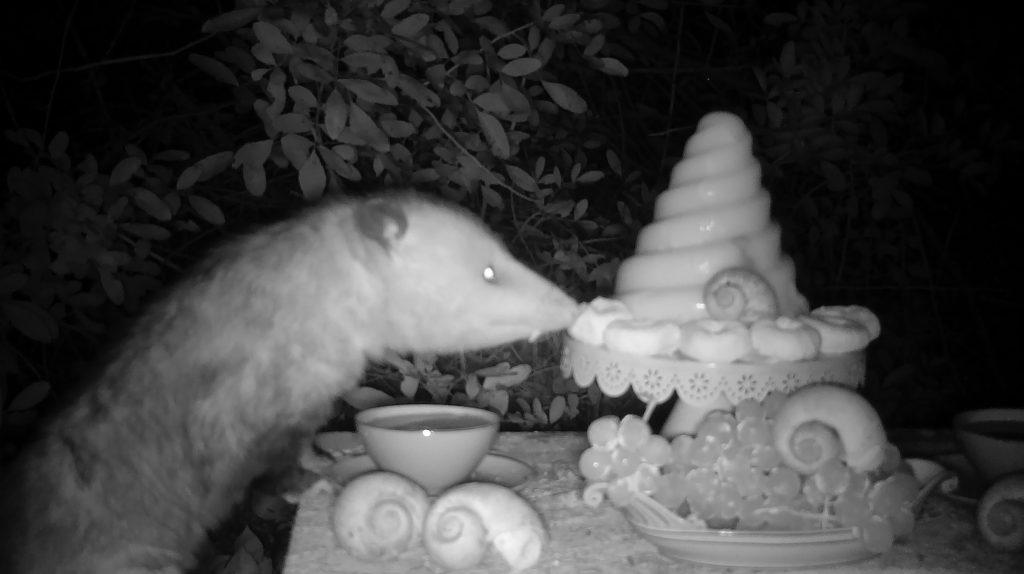 Dana Sherwood, (2017). Courtesy of the artist and Denny Dimin Gallery.

Dana Sherwood’s practice is largely influenced by considerations of the Anthropocene, and the myriad and complex ways humans, animals, and the environment affect each other. In 2017, Sherwood created a lavish outdoor banquet, which she set on a decorated children’s table replete with plates and teacups. Using an infrared camera over the course of three months, she captured a nightly parade of wild animals, from raccoons and opossums to house cats and foxes, coming to dine on the sumptuous spread. The nightly menu evolved depending on the animals’ apparent preferences and with considerations for their natural diets—and came to include foods like stunning gelatin molds with hot dogs and powdered donuts. The result was a type of “conversation with nature,” wherein the boundary between the human and animal worlds became malleable and synergetic.

Darren Bader, no title, not dated. 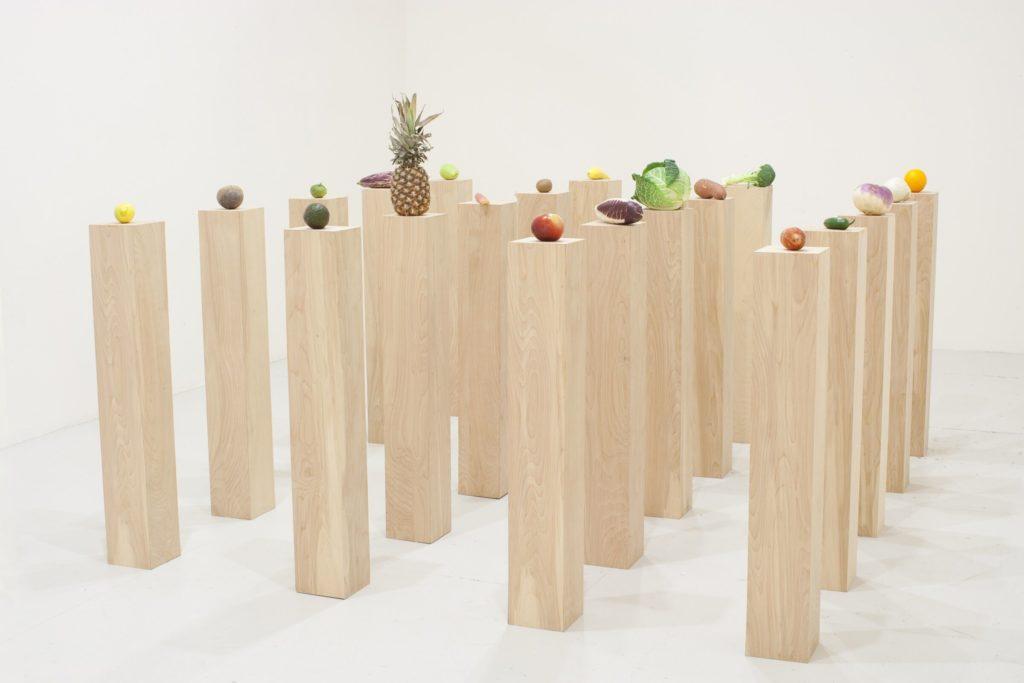 A single vegetable or piece of fruit on a plinth in a series of even numbers—but at least 12—is the core construction for Darren Badder’s untitled work. Acquired by the Whitney Museum of American Art in 2015, the piece was exhibited in 2020, with Badder instructing that the fruits and vegetables were to be “harvested” and prepared into small salads and served to visitors four times a week. After each gathering, the plinths were restocked with fresh replacements, though the type is largely dependent on what is available. In the work, the fruits and vegetables are presented as nature’s sculptures, and operate as an exploration of the possibilities of conceptual art and what constitutes an art object—with a touch of humor.

Earlier, it was noted that you should never eat art without express permission, but in one recent and infamous occasion, someone did just that. Maurizio Cattelan caused shockwaves at Art Basel Miami Beach 2019 with his work , which was comprised of a single banana duct-taped to Perrotin gallery’s booth wall (one of three installations). The work became the subject of everything from viral memes to academic think pieces on the meaning and value of contemporary art. As the fair was winding down, artist David Datuna casually took down the banana—which had already been sold for $120,000—and ate it without permission. Datuna labelled the eating of the banana a performance titled . Cattelan later confirmed that this did not destroy the work, as “the banana is the idea.”