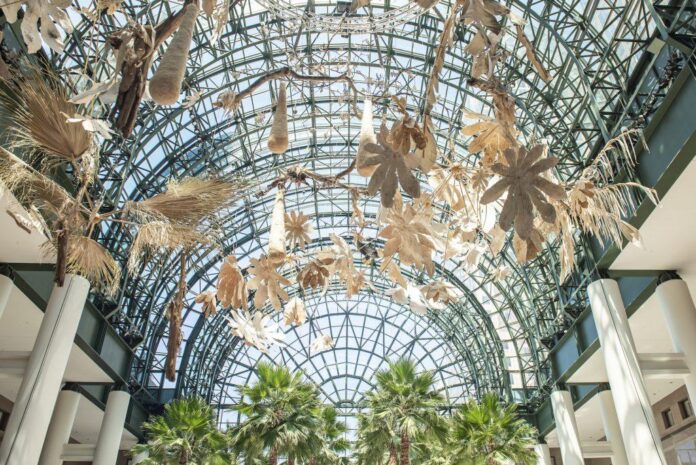 Giant white leaves flutter beneath the glass atrium of the Winter Garden of New York’s Brookfield Place in a loose net. This fantastical, jungle-like creation is (), an installation by the New York-born Colombian artist Tatiana Arocha (b. 1974). The installation, a creative interpretation of a rainforest canopy, is made of organic materials. The leaves waving from the installation are made from the fibers of fique, pineapple, vetiver, and plantains. Branches gathered from the Hudson River Valley dangle from within the twists of leaves. The artist completed the work as part of the Arts Brookfield program, a rotating series of installations commissioned for Brookfield Place, the dining and shopping destination in Lower Manhattan. Arocha was recently named the 2022 recipient of the Brookfield Place New York Annual Arts Commission award. For over 35 years, Arts Brookfield has invited artists to create new works for public settings to engage the communities in important conversations.

Recently we spoke with the artist, who shared insights into the significance of the materials in her practice and what she hopes viewers consider when they see 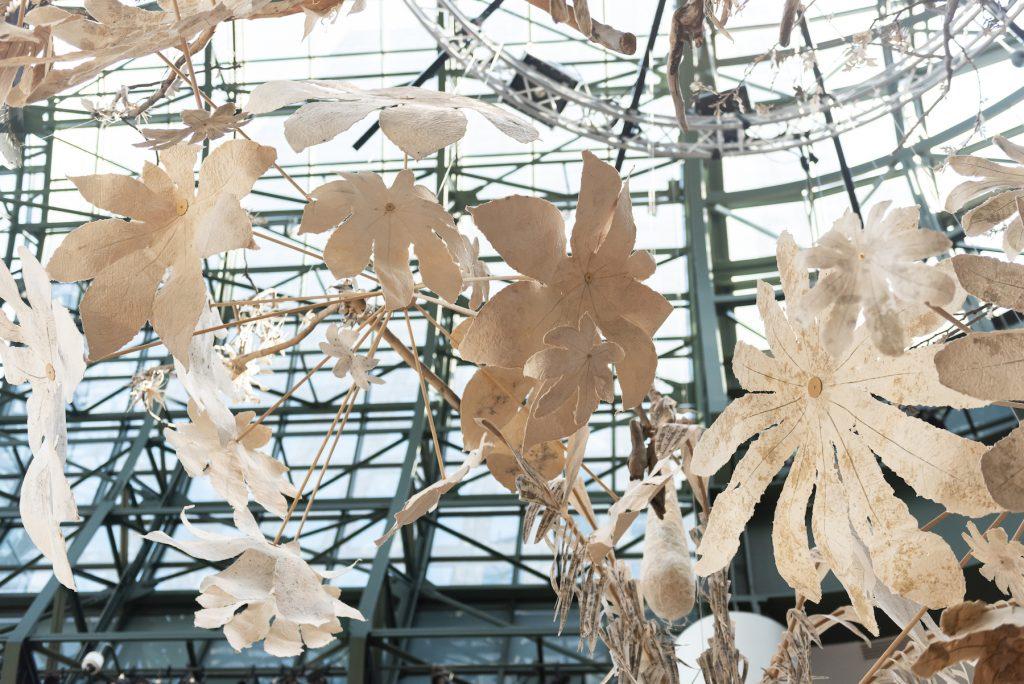 Tell us a little bit about yourself and how you came to art-making.

My background is as a graphic designer and illustrator. I chose it because I wanted to be in a creative field; I love art and I wanted to eventually become an artist, but I had heard so many conversations about how hard it was to survive, so I chose a career that was more focused on being able to make a living. Though I was raised in Colombia, I was born in New York and I had a U.S. passport. After years of working for the entertainment and TV industries in Colombia, I arrived in New York with my list of companies that I wanted to interview. I dreamed of working with MTV and VH1.

But when I started working here, I noticed that I was a little bit more of a rebel, and was constantly trying to do something artsy for very corporate or commercial companies. I started doing my own work and worked for many years in different design studios. This was the 1990s; I opened my own design studio in Williamsburg with a friend and I started an online gallery. I organized monthly exhibitions online, then we decided to bring them into real life, so I started doing exhibitions in the studio space. I got very inspired and began to explore my own language as an artist more and more. When I finally decided to focus on my art, I had one client who came to my studio and said, “It’s about time.” These corporate spheres were not the right places to be making political or environmental statements.

You have a practice that is really rooted in materials and questions of ethics and sustainability relating to Colombia. Can you tell me more about that?

In the U.S., I found myself in conversations in which people would ask me where they could get cocaine when traveling in Colombia. It was crazy to me that for many Americans, there was no connection between being a consumer of cocaine and the environmental impact of the illegal plantations of cocaine , and all the political issues and displacement that come with it. We experienced 60 years of war centered on drug trafficking—the impact has been tremendous. I couldn’t believe that people’s only knowledge about Colombia was about cocaine, and with no real understanding of the incredible biodiversity of the country and the critical role it plays in the climate crisis. I decided to engage in these conversations through my artwork. 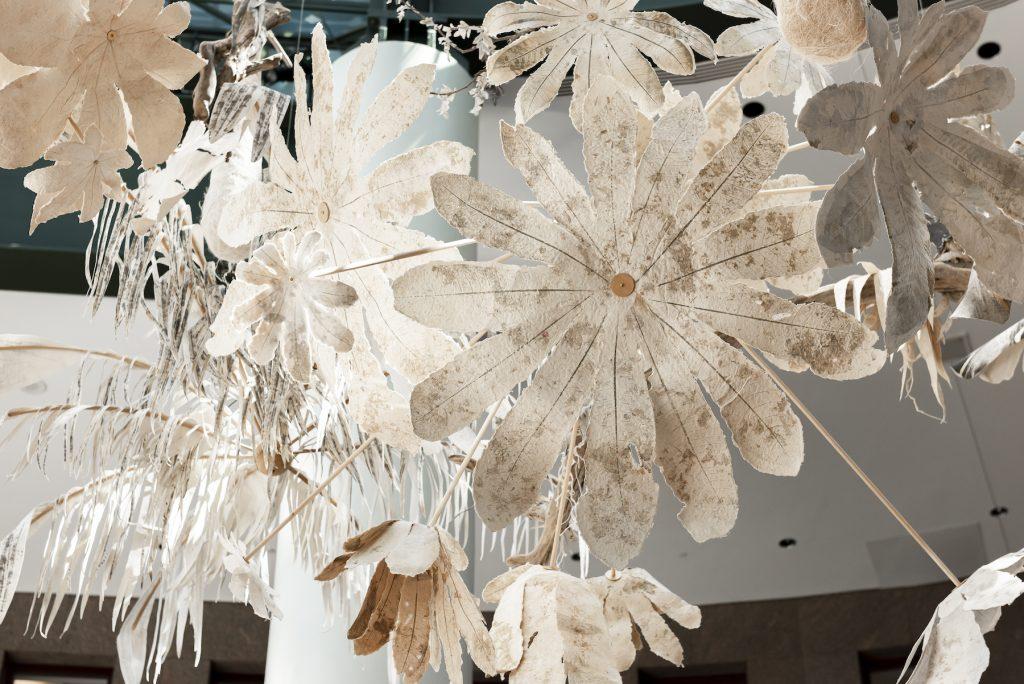 Most of your works have been two-dimensional thus far, but Bajo el manto de la selva is a three-dimensional installation that occupies a large public space. Can you tell me about that transition, what that was like for you as an artist, and what you’ve learned?

My husband laughs at me because I just don’t say no to things. Why not make a rainforest canopy? I could have kept working in the same way I have been, but somehow I was excited to have a different challenge.

I decided I wanted to make a canopy with branches that I found. I had originally wanted to work with this material called , which is made from the bark of a tree by indigenous communities. The material is sort of like papyrus; it’s very textural. My dad was an anthropologist and we always had some pieces of the material in our house. It’s a totally sustainable material in small amounts, but in the process of planning for this installation, I realized that with large quantities, things change. Because it is made from the bark of a tree, the tree dies afterward. Given the amount I needed for the installation, that repercussion might actually be quite consequential. The dynamic became too complicated and so I started looking into handmade paper. I got in touch with a woman who runs a foundation that makes a paper called fique, which is what I ultimately used.

But of course, when I come to sign the contract for the installation with Brookfield Place, the paperwork stated that everything I use needs to be fireproof. Here I am working with only natural materials, so I then began a process of fireproofing. It’s been a learning process, to say the least.

When it comes to ethics and sustainability, I typically work digitally and only produce the work when I know it’s going to be installed, so in the moment of producing an artwork, I’m very conscious about how it is going be made and the materials I’m using. This is the first time that I’m not working with canvas. Fique wound up being an amazing material that has traditionally been used to create bags that carry onions, potatoes, and coffee. Over time, plastic bags have become more popular in Colombia, so using this material was a great way to bring this process back to the communities that had this craft knowledge.

What do you hope people experience when they enter the installation?
One of the major challenges in Colombia is the availability and expense of water. In that environment, you become very aware of your consumption. Water was inherent to the process of creating the fique paper used in the installation, but it was made with recycled water.

Of course, I don’t know if I can bring awareness of water consumption to someone just passing through—but what I’m hoping is that I can spark a bit of curiosity to learn about Colombia and to dig deeper. I don’t want to create a sense of judgment but of connection. Hopefully, the work invites people to consider a new idea of the country and engage with the realities of the environment from a new and different place.

“Bajo el manto de la selva” (Under the Cover of the Jungle) is on view at the Winter Garden at Brookfield Place in New York through September 12, 2022.