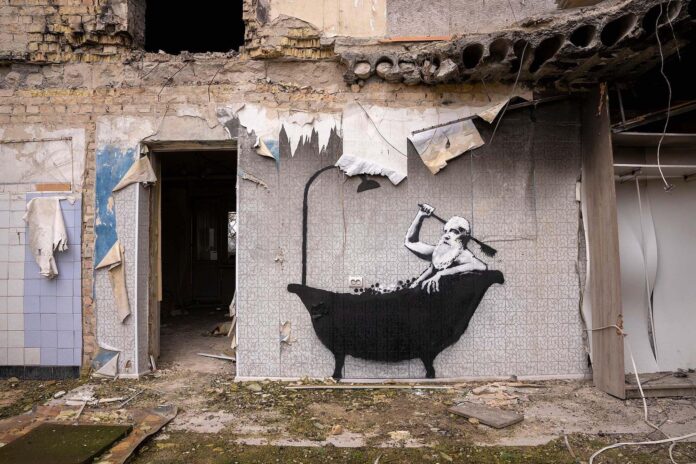 Anonymous art world renegade Banksy has posted a short behind-the-scenes video on Instagram and his website that depicts his artistic interventions in Horenka, Ukraine, a small village on the northwest outskirts of Kyiv that was a site of particularly violent Russian attacks earlier this year. The video, soundtracked in part by a plaintive Ukrainian folk song, splices footage of the artist (and/or his collaborators) cutting stencils and spray-painting his murals, with lingering panning shots showing Horenka’s war-ravaged architecture.

The reel video features a brief street interview with an unidentified mother and her child in front of a gutted school building—as the woman comforts her little girl, she states with chilling frankness, “We have already cried so much, we have no tears left.” The video closes on a dissonant note: a heated local man points to an image the artist painted on a graffitied wall so that a pre-existing tag of a penis became a warhead atop an armoured truck and declares, “For this, I would kick out all his teeth and break his legs.”

As is typical of Banksy’s work, the artist’s edits combine a satirist’s edge for winking commentary with a sincere investment in political solidarity—in 2020, he directly addressed the European migrant crisis, and he has created several projects commenting on Israel’s occupation of the West Bank over the course of his career. The new video further confirms Banksy’s presence in the conflict zone, following documentation of a half-dozen murals and other interventions in the Kyiv region.

Horenka found itself on the front lines shortly after Russia’s invasion began on 24 February and was severely affected by shelling, mass displacement and the killing of civilians.

Night at the Museum: NATO World Leaders Perused the Galleries of Madrid’s Prado Museum During the Organization’s Annual Summit