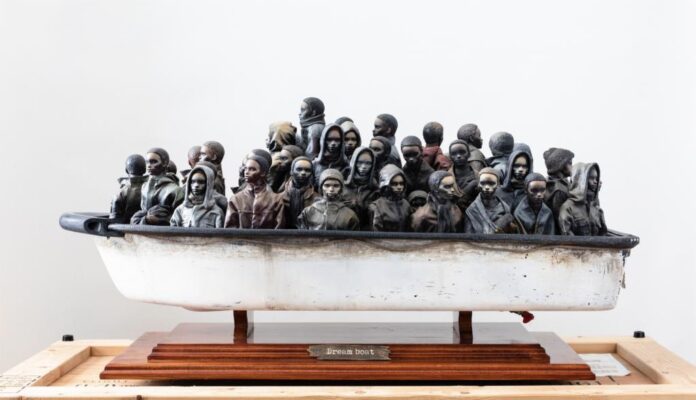 Attention Banksy fans: the street artist’s , a sculpture of a boat packed with refugees originally created for Dismaland—his temporary, wildly popular “bemusement” theme park erected in 2015 in the seaside English town of Weston-super-Mare—is for sale at Context Art Miami.

It’s on offer from Ballon Rouge Art Advisory and Montreal’s S16 gallery. A press release claims it will “fetch millions.” (Banksy’s auction record is $25.4 million, set last year with the sale of his famously shredded , according to the Artnet Price Database.)

“We are taking offers until the end of the fair. There has been overwhelming interest in the piece and multiple offers from around the globe thus far,” Ballon Rouge president Jon Bucci told Artnet News in an email. “This is a once-in-a-lifetime chance. We are certain that this will go down in history as one of the most important Banksy pieces.”

Banksy originally sold the work in 2018, staging a competition, titled . Participants could pay £2 ($2.50) for a raffle ticket and the chance to figure out how many grams it was, not counting the wooden plinth on which it is mounted. 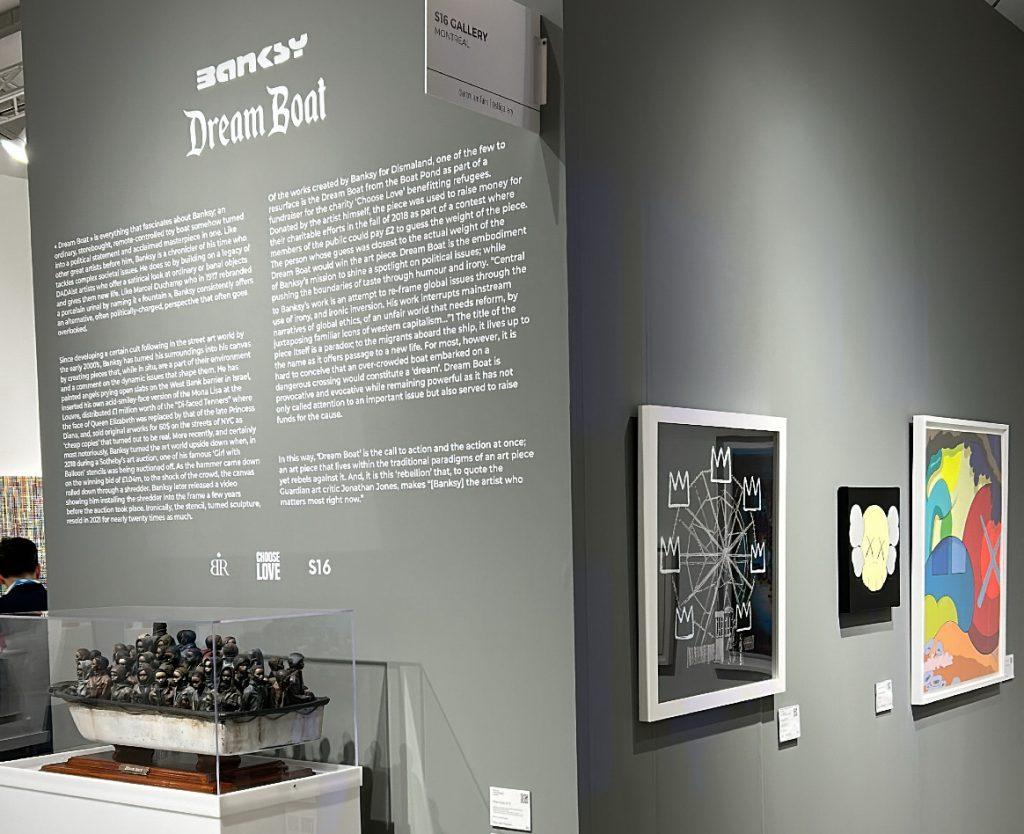 The winner got the sculpture, and the proceeds of the raffle went to Choose Love, a humanitarian aid organization benefitting refugees. In keeping with the spirit of the original contest, the owner will be giving a “significant” portion of the proceeds to the charity, which is currently raising funds for those displaced by Russia’s invasion of Ukraine.

A representative for Banksy declined to comment on the sale. The artist has never revealed how much money the initial auction raised for Choose Love.

The 2018 raffle offered the following clues to help participants guess the correct weight: “The boat is constructed from a shop-bought fiberglass hull, customized with quick-cast resin figures which are foam filled and hand spray painted. Although the prize includes a battery pack, that is not currently in the boat.” 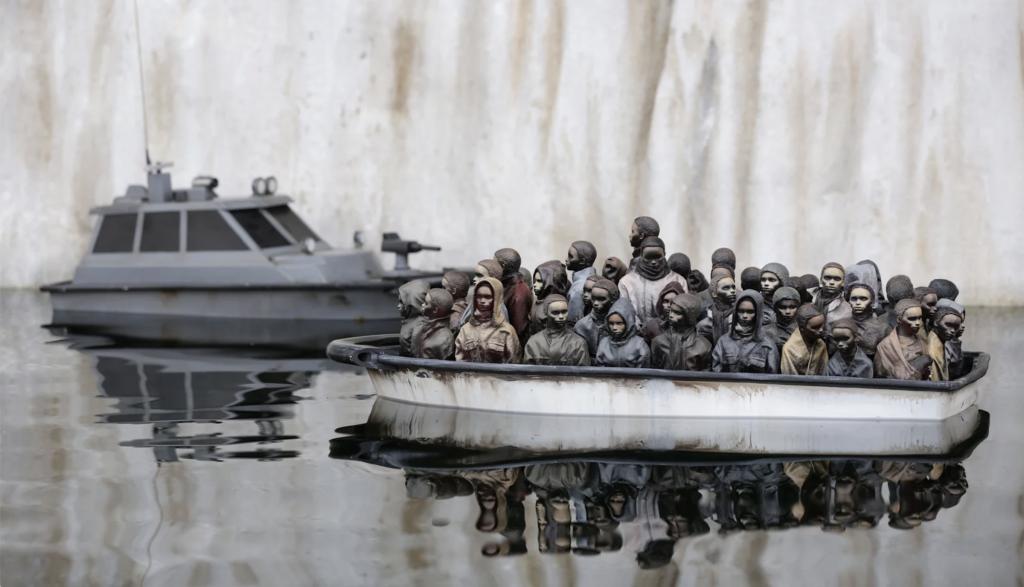 Originally, was part of a coin-operated game for Dismaland, allowing visitors to play as police boats chased down the vessel and its many refugees.

“To see people’s reaction to the piece is incredible,” Bucci said. “It is poignant and powerful. We believe this sculpture encompasses all that is Banksy… activism, social commentary, charity, irony, and incredible execution.”

The sculpture’s actual weight is 11682.690 grams (roughly 25.75 pounds, or 412 ounces), and the contest winner guessed within a tenth of a gram. He is now selling the work, along with its accompanying certificate of authenticity from Pest Control—the body tasked with authenticating works by the artist. 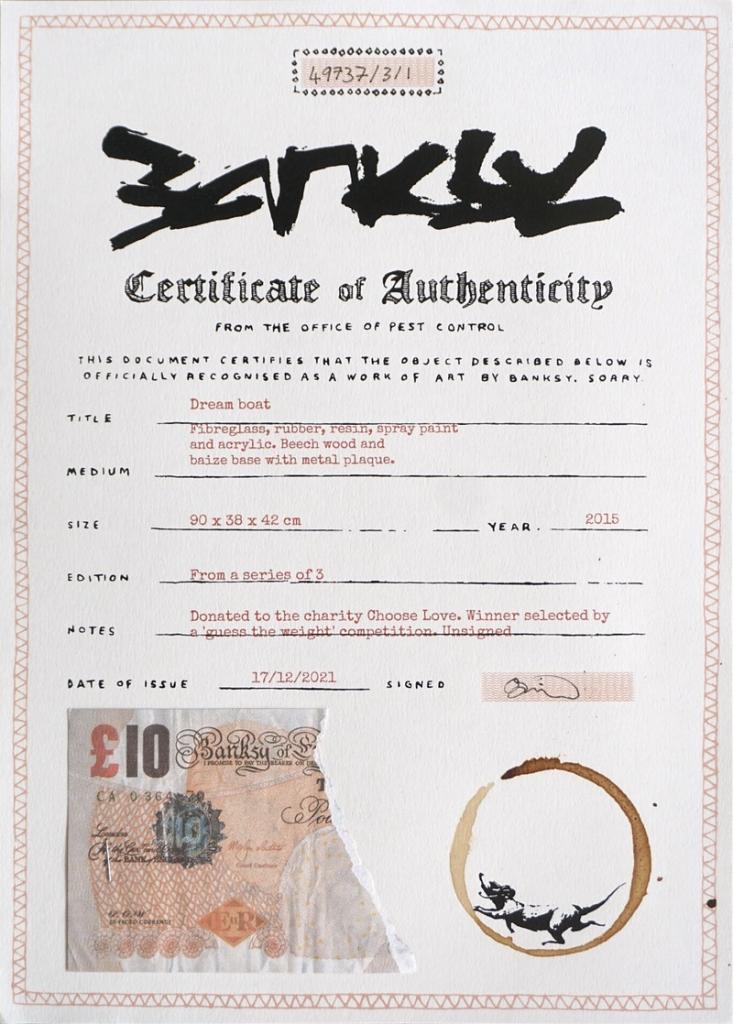 “The winner prefers to remain anonymous, but we can reveal that he is a true Banksy fan who has followed the artist from very early on in his career. could not have gone to a more worthy person,” Bucci added. “Although the time has come for him to part with it, it is being done in a way that hopes to respect the artist’s original vision by incorporating the original beneficiary charity, Choose Love.”

Smithsonian’s Hirshhorn Museum in Washington, DC picks architects for major revamp of its building and plaza