Home News What I Buy and Why: Fashion Designer Sander Lak Shows Us His... 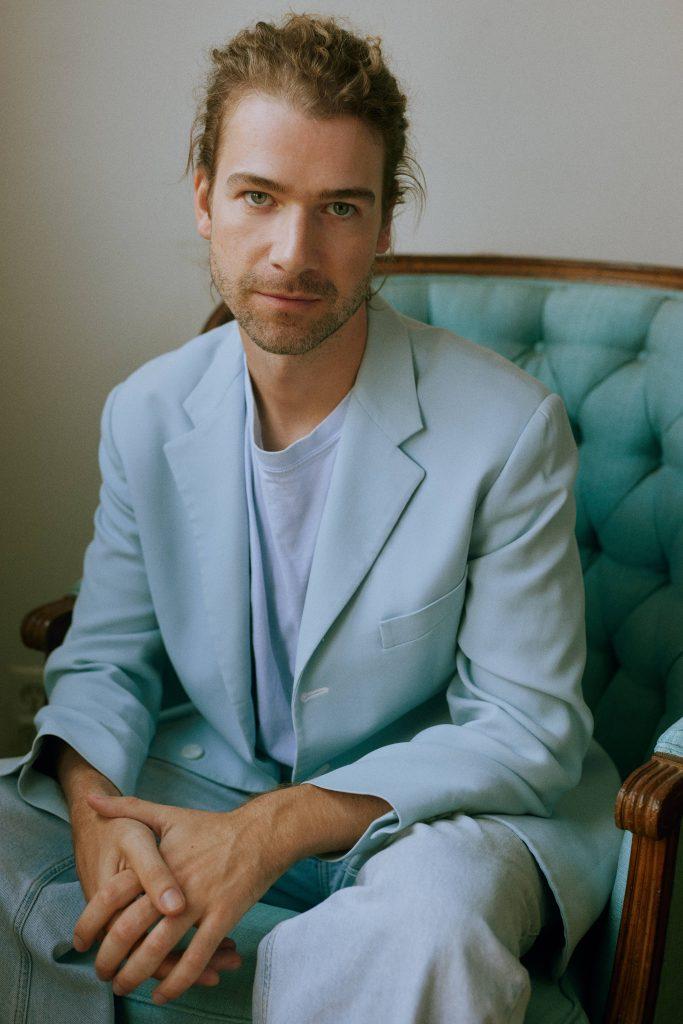 Despite its brief life (ca. 2016–2020), Sander Lak’s beloved New York fashion brand Sies Marjan made a bold and lasting impression. After all, his pastel coats and jewel-toned dresses injected the notoriously dark palettes of downtown New York with a luxurious dose of color.

“Color is everything,” the Brunei-born, New York-based designer and creative director told Artnet News. In fact, he has a new book all about the topic: , published by Rizzoli in October.

In it, alongside contributions from the likes of Rem Koolhaas, Julie Mehretu, and Isabella Rossellini, not to mention a foreword by Elizabeth Peyton, you’ll find imagery from past Sies Marjan ad campaigns and runway shows, as well as Lak’s personal sketches and creative inspirations—all organized by hue. 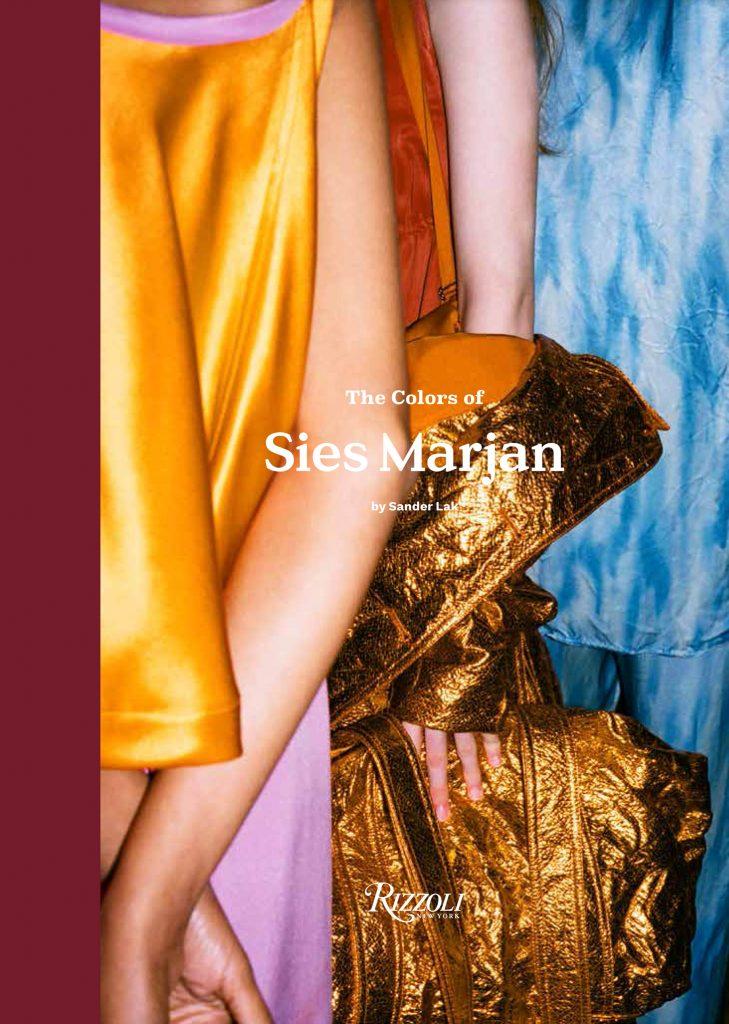 Color informs all aspects of the designer’s life, including his art collection, which includes everything from a lithograph by Neo Rauch (“I am a color snob and rarely think someone does a good job combining colors, but Neo truly knows!”) to a bright-green ceramic sneaker from a bookstore-slash-gallery in Athens, Greece.

“I am very sensitive to color so I can’t have too many different colors in my house,” said Lak, whose approach to art collecting is decidedly less restrained. When asked what he would choose if he could steal one work of art without getting caught, he replied, in part, “I would park a truck inside the Guggenheim right now and load it up with as many Alex Katz works as I can humanly carry!”

Lak gave Artnet News a peek at his collection, which is colorful in more ways than one. 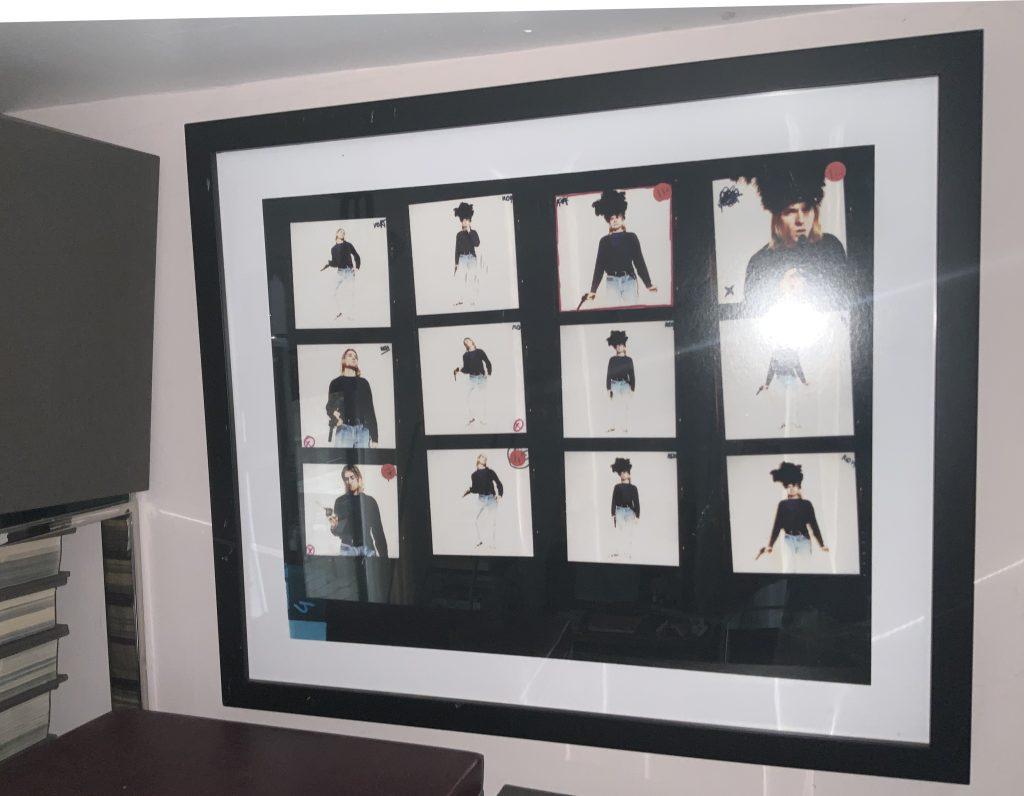 When I was making no money working at my first job in fashion, I saved up to buy a photo from Youri Lenquette that he took of Kurt Cobain holding a gun and wearing a black feathered hat. It’s one of my favorite images of Kurt, and when I saw it in a gallery in Paris, I knew I had to have it, even if it meant that I couldn’t eat for a week…

I don’t remember exactly what I paid for it—it was around 750 euros, which was a lot of money for me at the time. I still have the picture, and it has always found a place in my many homes over the years.

My partner and I were in Barcelona over the summer, and when we travel, we always find our way into local bookstores and galleries where we buy too much stuff! This time we found a small gallery called La Plataforma where they were exhibiting the works of the young, Barcelona-based artist Jan Vallverdú. We both fell in love with a piece titled . We just framed it and are finding the right spot for it. 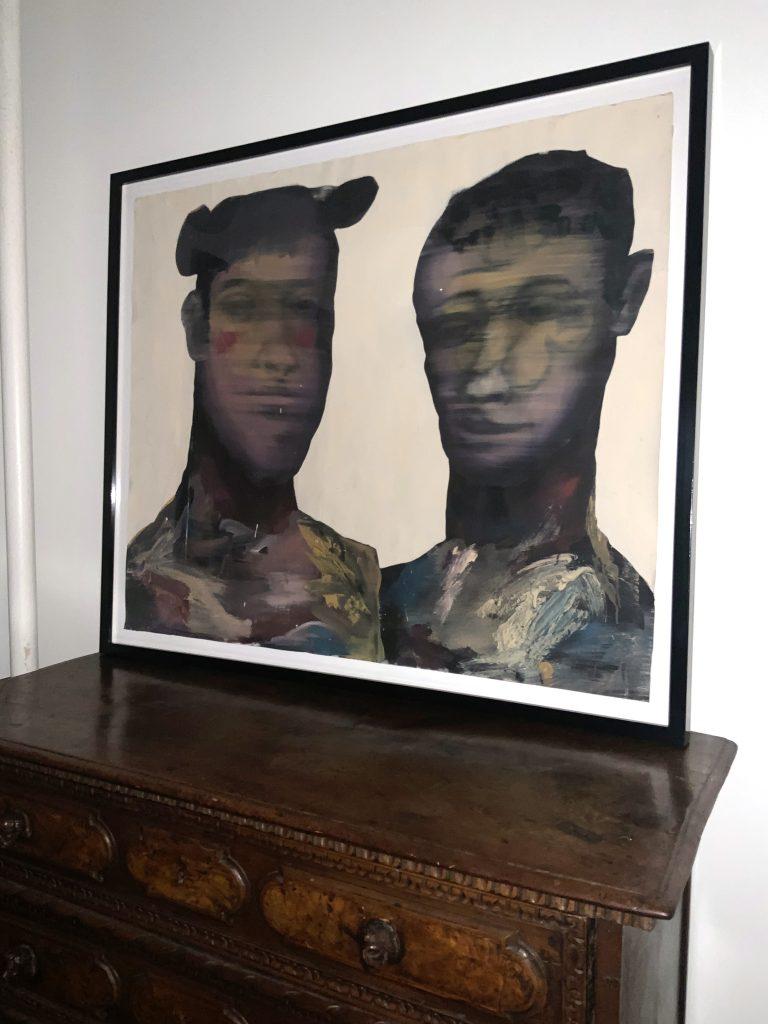 Maybe not this year, but at some point, I want a Rineke Dijkstra photo and a huge Julie Mehretu painting.

Probably a tossup between Lucy Kim’s , which I bought after seeing her work at the Institute of Contemporary Art in Boston; Alvin Ong’s incredible paintings , , and , which I selected from a huge group of paintings he showed at the Armory Show in 2021; and then a series of six Thomas Ruff pictures that I bought at David Zwirner, which are sadly stored away as I don’t have the right wall for it at the moment. So I have to move some things around, because I need some Ruff soon! 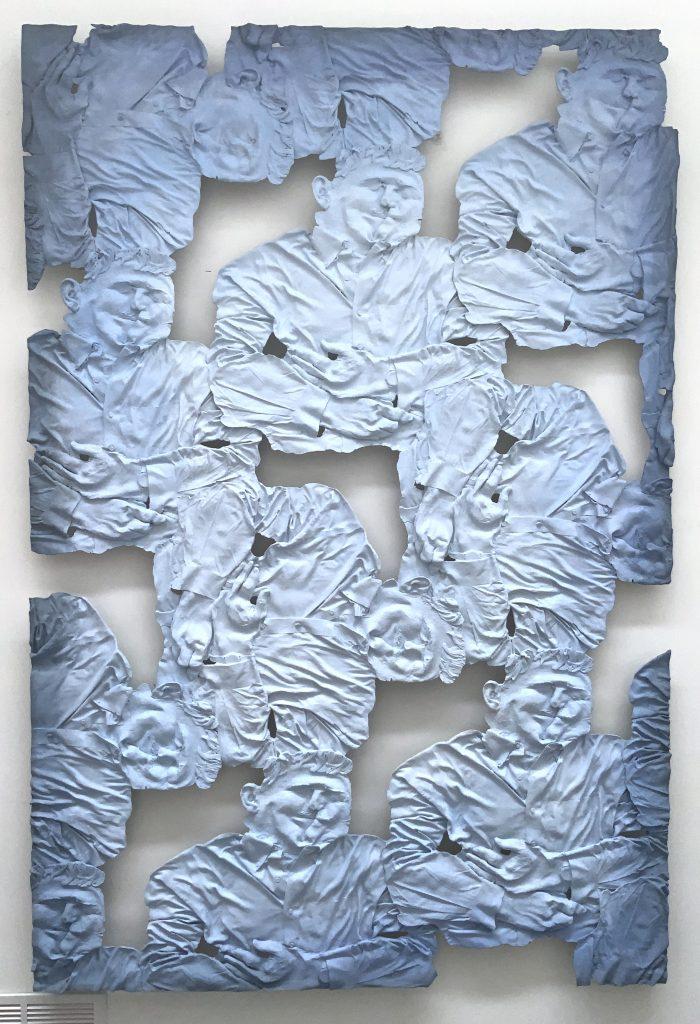 Never at the same place. I always find things when I travel or go to museums or galleries. I also love buying stuff on 1stDibs, and I have found some great paintings and sketches on eBay for almost nothing! Then you put them in a nice frame or place them next to an Alexei Hay or Hans Eijkelboom picture, and it looks like a million bucks.

How does your background as a fashion designer influence the way that you collect art?

I don’t think it does in a very direct way. I don’t think about fashion or clothes when I look at art, and especially not when I am considering buying something. I do everything very instinctually. Obviously color plays a big part of this, as that’s in my DNA. 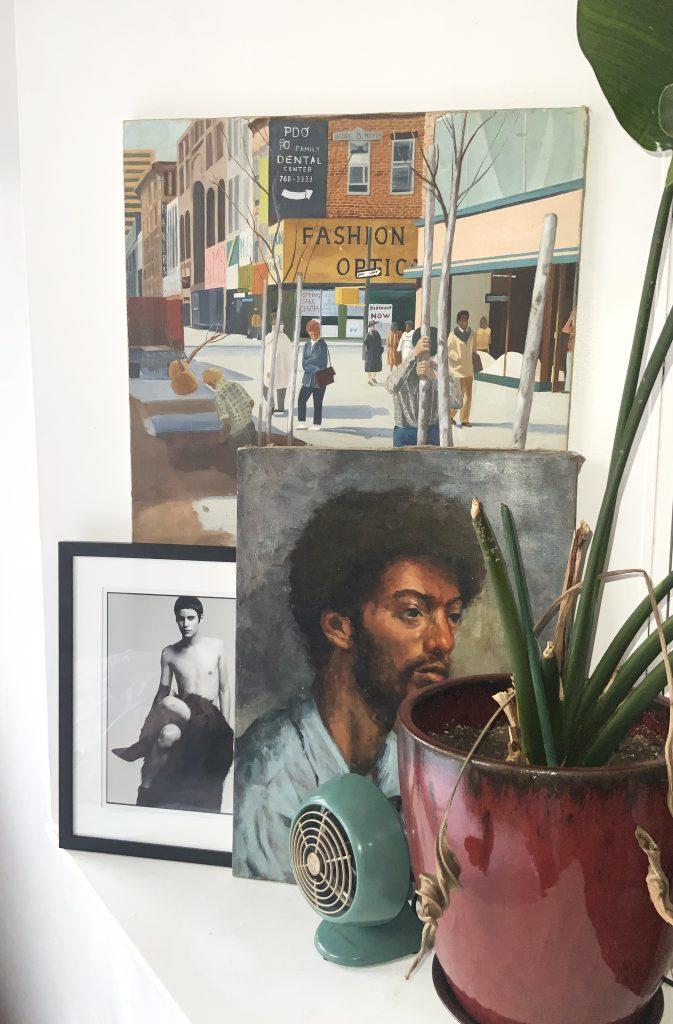 Art that the designer bought on eBay. Courtesy of Sander Lak.

What is your philosophy when it comes to incorporating art in your home? And how does color play into it?

Color is everything, and I also mean “no color.” I am very sensitive to color, so I can’t have too many different colors in my house—I would go crazy! It would be like if you have a very heightened and sensitive palate, you can’t eat everything all the time because it’ll make you nauseous. So I am very selective with color in my house.

I like to think about where to place an artwork before hanging it because I hate changing things around too much; I want to commit to the choice. This doesn’t always happen, but I try. I also believe that not everything needs to hang properly. I love framed works on a table or the ground—sort of making it more casual, even if it’s really expensive. And I love mixing high and low. 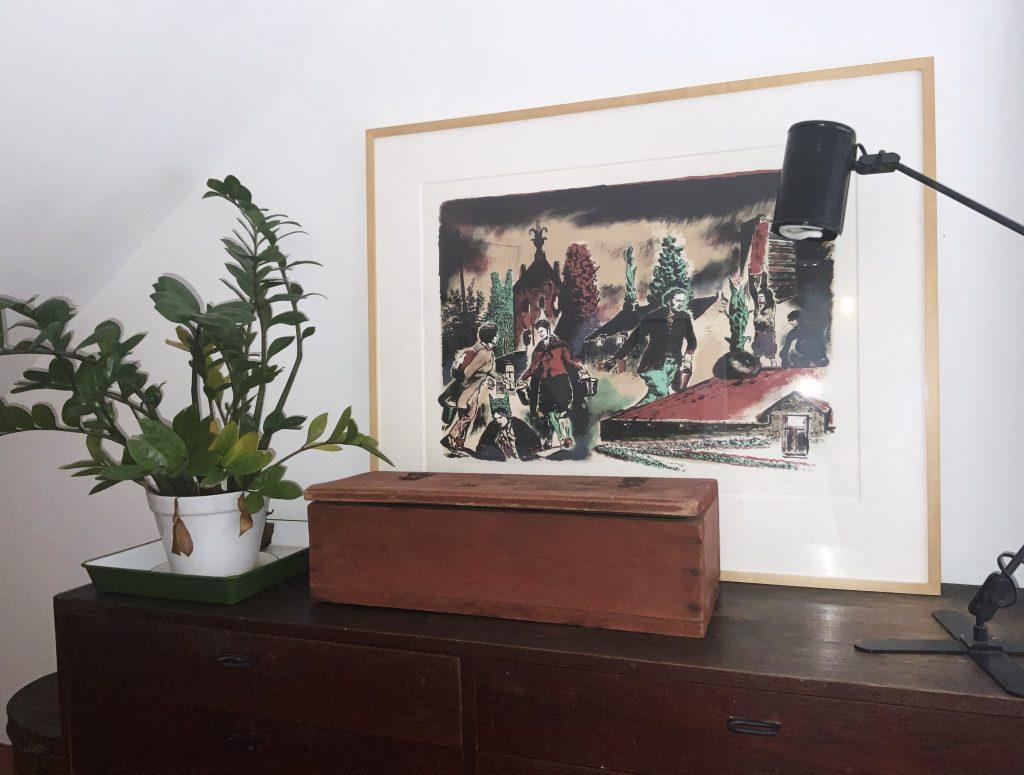 What work do you have hanging above your sofa? What about in your bedroom?

I have a few things in these places. One is a lithograph of Neo Rauch that I bought a few years back. I love Neo’s use of color. I am a color snob and rarely think someone does a good job combining colors, but Neo truly knows!

On the other side is a stunning picture by Wolfgang Tillmans (that I had in my old apartment in the living room. One day I was being photographed inside my house for by Tina Barney (I bluffed and said ‘I’ll only do the article if Tina shoots me’). She took some pictures of my apartment, including one of the Wolfgang Tillmans photo. I asked if I could have it, so now I have a one-of-a-kind Wolfgang-Tillmans-by-Tina-Barney picture!

Above my couch is a lithograph of one of my favorite works by Marlene Dumas, (2015). I had it shipped from a gallery in China, which almost cost me more than the actual work, but it was so worth it.

I got an artwork in Athens, Greece, at a bookstore/gallery called Hyper Hypo—it’s a ceramic Nike sneaker by Coxx Ceramics and I absolutely love it, but I am having a hard time placing it in the right way and the right location… I have tried a few things and I just can’t figure it out, but I know I’ll find a place at some point where it fits perfectly. Right now, it’s in my library where it kind of disappears too much…

A “Nike” sneaker from Coxx Ceramics. Courtesy of Sander Lak.

I want to shoot myself in the foot for not having bought one of Diedrick Brackens’s works when he was just starting out. I instantly loved his work when I saw it and had a chance to buy a big piece, but I didn’t because I had just bought something else and told myself to stop buying art for a while and save money. I still regret that decision.

Another one is years back when I met painter Claire Tabouret in her Los Angeles studio. She was up-and-coming and I almost bought a painting for very little, but I was in the same situation as with the Brackens… So, I am never going to tell myself I shouldn’t buy art ever again! I keep missing out on these gems.

Is there a work you regret purchasing? If so, what is it, and why?

I don’t regret any art I have bought. I regret things I didn’t buy—that’s the problem!

I would go to David and Monica Zwirner’s house and take that huge Neo Rauch painting they have in their living room. I love that one so much.

But I’d also steal a Sarah Sze piece anywhere I could find one. And I also really need that huge Boris Mikhailov I saw at MoMA this summer…

Oh and I would park a truck inside the Guggenheim right now and load it up with as many Alex Katz works as I can humanly carry!

Okay, one more: In Berlin I saw a Bernhard Martin painting that made me feel like I just took mushrooms. So I want that one as well.

As you can see, I wouldn’t be able to keep it to one work. I would be a real art thief.

5 Ways To Use Flowers For Your Home Décor