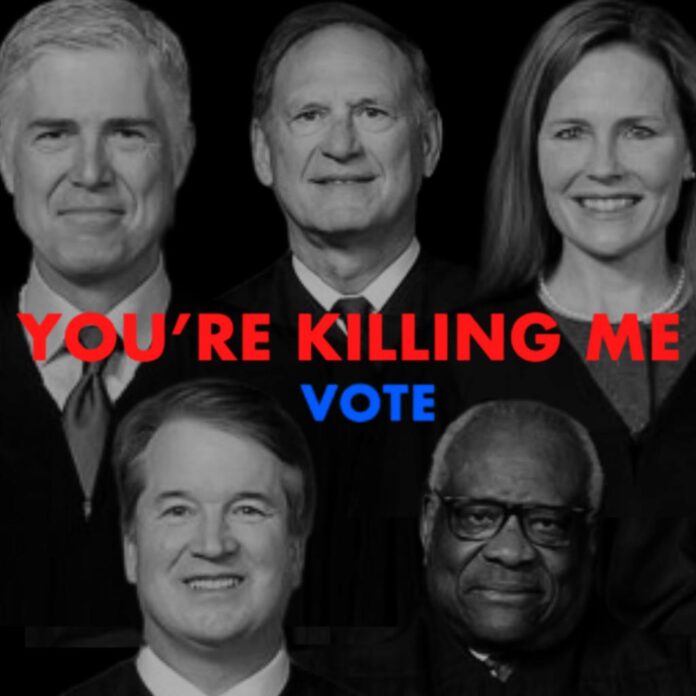 Two prominent advertising companies are refusing to display billboards designed by artists for a voting campaign in Georgia.

Organized by the progressive advocacy group People for the American Way (PFAW), the Georgia Art Project aimed to display artist-created imagery on digital billboards across the Atlanta metro area in the lead up to Georgia’s momentous midterm elections on November 8.

However, the national companies that own the billboards, Outfront Media and Lamar Advertising, rejected the designs of two participating artists: Deborah Kass and Cleon Peterson. 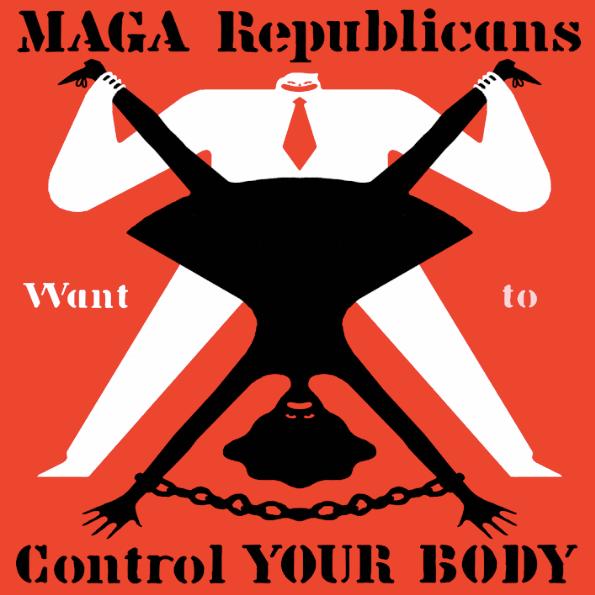 Set against a black background, Kass’s design includes blurry headshots of Clarence Thomas, Samuel Alito Jr., Brett Kavanaugh, Amy Coney Barrett, and Neil Gorsuch—the five Supreme Court justices who voted to overturn Roe v. Wade in June. In bold red lettering before them is the caption “YOU’RE KILLING ME.” The word “VOTE” is written out in blue below.

“The Supreme Court, along with the Republican Party, is inscribing violence against women and girls into law,” Kass, an outspoken artist-activist who has participated in numerous politically-oriented public art projects, told Artnet News.

“They are institutionalizing male supremacy since men bear zero responsibility or accountability for their part in impregnating women and children. The conservative members of the court should all be arrested for assault, battery, murder, and violation of civil rights of all females in defiance of the Bill of Rights’ promise of life, liberty, and the pursuit of happiness.”

“Freedom,” the artist added, “is only for white men.”

Artist Deborah Kass is calling on Georgians: Vote. Our lives depend on it.
But when she tried to share her message, the billboard companies censored her. Help spread the word – and vote by Nov 8. @peoplefor #GeorgiaArtProject #ArtistsFortheAmericanWay pic.twitter.com/xSSGshBV8x

Peterson, meanwhile, contributed two images to PFAW’s Georgia Art Project. One shows a row of headless men in white suits looking up the skirts of upturned women in chains. The scene is accompanied by the declaration, “MAGA REPUBLICANS Want to Control YOUR BODY.” The other artwork depicts a horde of white-hooded men reaching for an automatic rifle. Its own caption reads, “MAGA REPUBLICANS Want White Supremacists to HAVE GUNS.”

“The personal and political chaos in our world is a direct result of the violence against human beings in the name of power,” Peterson said of his designs in a statement. “The art for these billboards depicts the rawness and the terror of those struggles and I hope it’s enough to move the people of Georgia to action in this midterm election.”

“We were really shocked and disappointed,” Myrick said. “They’re great, quality art from really accomplished artists, but they’re also not graphic or obscene. They’re not as obscene as what Republicans intend to do if they take power.”

“If you’re offended by this artwork,” the director went on, “wait until you see the laws that the Republicans pass.”

MAGA Republicans want to control our bodies and give white supremacists guns.

Now, in response to the companies’ rejections, PFAW plans to present Kass and Peterson’s artworks on roving trucks dispatched in Atlanta. The project’s other designs, conceived by artists Victoria Cassinova, Shepard Fairey, Carrie Mae Weems, and Alyson Shotz, will remain displayed on Outfront and Lamar billboards.

Representatives from the two advertising companies did not immediately respond to Artnet’s request for comment.

With nearly every legislative position on the ballet, Georgia’s upcoming midterm elections will have a profound impact on the state’s political landscape. One Senate and 14 House seats are up for grabs in Georgia, as are the roles of governor, secretary of state, and attorney general.

Hundred of Ancient Dice Made From Animal Bones Were Used to Summon Gods and Predict the Future, a New Study Reveals