Home News Sotheby’s Is Selling a First Edition of the U.S. Constitution One Year... 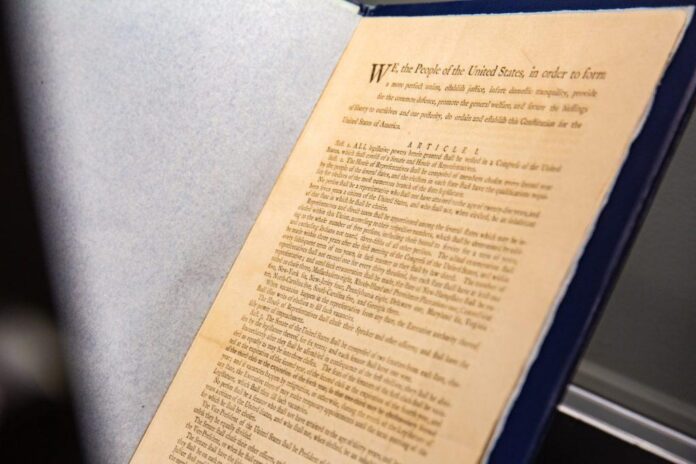 An original copy of the U.S. Constitution is due to go on sale at Sotheby’s in New York on December 13. It is only the third copy of a first-edition printing of the landmark document ever to come to auction and carries an estimate of $20 million to $30 million.

Despite the considerable rarity of the historic artifact, the news of its sale may sound familiar. Just one year has elapsed since another version, known as the Goldman copy, was last up for auction at Sotheby’s, selling for a whopping $43.2 million in November 2021.

The astounding result was due, in part, to last year’s NFT frenzy, which saw the formation of a decentralized autonomous organization or DAO to raise money to buy the Goldman copy. ConstitutionDAO formed just a week before the sale, crowdfunding $46 million worth of ETH cryptocurrency in a failed attempt to buy it.

The DAO, however, was outbid by hedge fund billionaire and founder of Citadel, Kenneth Griffin in a sale that established a new record for any book, manuscript, or printed text sold at auction.

Although ConstitutionDAO raised more than Griffin’s winning bid, the group was not able to bid any higher than $40 million if it hoped to have enough funds left over to preserve the manuscript. Many of the 17,000 contributors to the crowdfunding effort have since received refunds (minus transaction costs) and the member-owned group is now defunct.

Only 13 of the 500 first edition copies of the final text of the Constitution are known to survive. They were printed in 1787 for submission to the Continental Congress, and were distributed among the delegates at the Constitutional Convention.

There are only two of these original documents still in private hands, including the version sold in 2021, making this sale a particularly unique opportunity.

The present text, which was bought at auction in 1894 was given to the book collector Adrian Van Sinderen when he was still just a child. His descendants have held on to the copy for 128 years, occasionally lending it for public exhibition.

Although this version is in good condition, it has undergone minor repairs and so it is not of the same exceptional standard as the Goldman copy.

“The Goldman copy achieved an extraordinary price,” the global head of Books & Manuscripts at Sotheby’s, Richard Austin, told Bloomberg. “We wanted an estimate that was still conservative enough to attract bidding, and $20 million to $30 million still does that.”

“It’s unusual to get second chances but this is it,” he also commented on the quick succession of two once-in-a-lifetime sales in two years.

ConstitutionDAO had not yet replied to Artnet News’ request for comment on whether the now defunct group planned to reform so it could bid again this time around.